I heard that there’s a French foods restaurant that serves hearty meal at lunchtime, especially meat and I wanted to go there for a long time.
Finally, I could go there.

The restaurant is small and we have to reserve in advance even at lunchtime.
La Porte Rouge 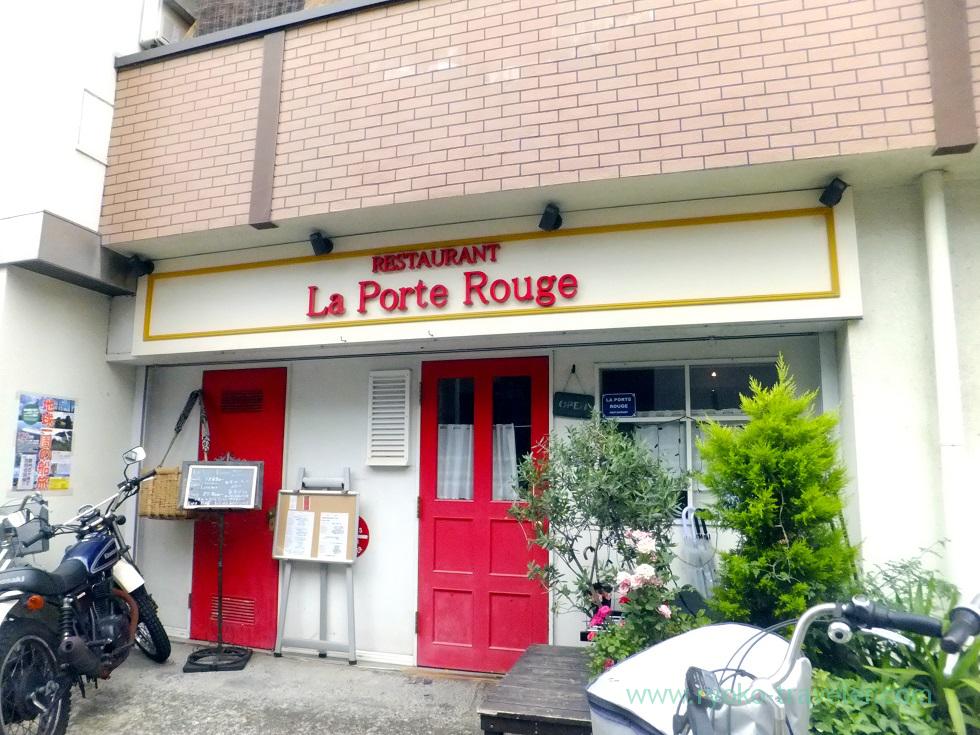 Red and white. So cute 🙂

They serve only one lunch set for 1620 yen at lunchtime.
We choice one appetizer, one main course, one dessert and one drink from some foods.

We were two, so we decided to order different foods each other and share. 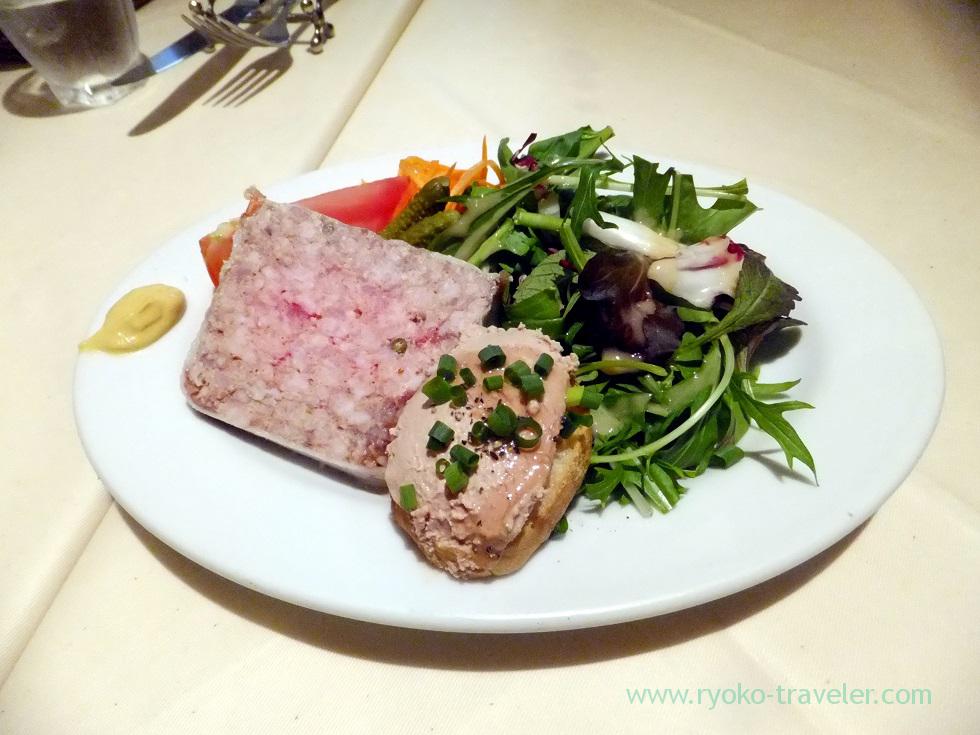 The putty was smooth and tasty. And lots of vegetables on it. I felt I was going to be full in my stomach only this food … 🙁 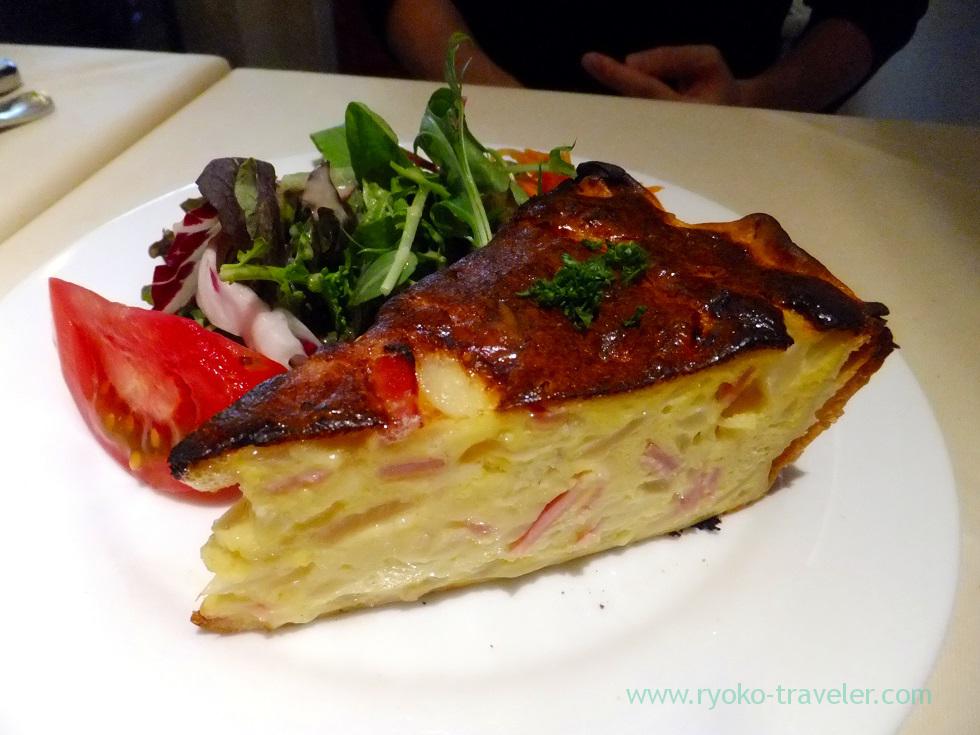 Also the bread was served. 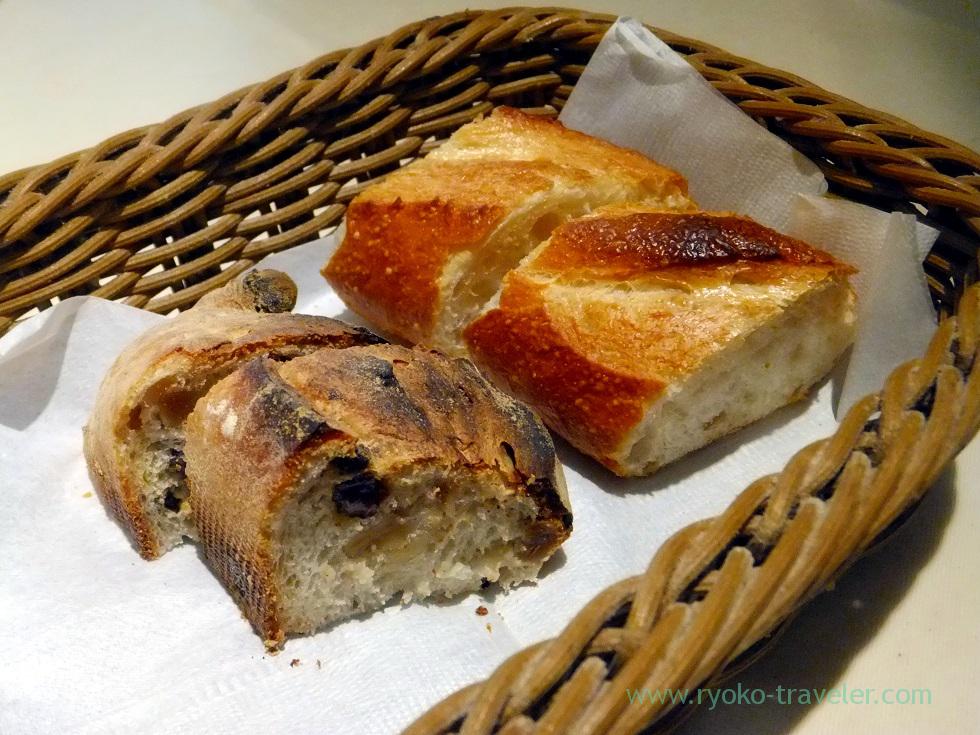 It was hard, and I felt uneasy that I was going to be completely full in my stomach, so I didn’t eat bread so much. 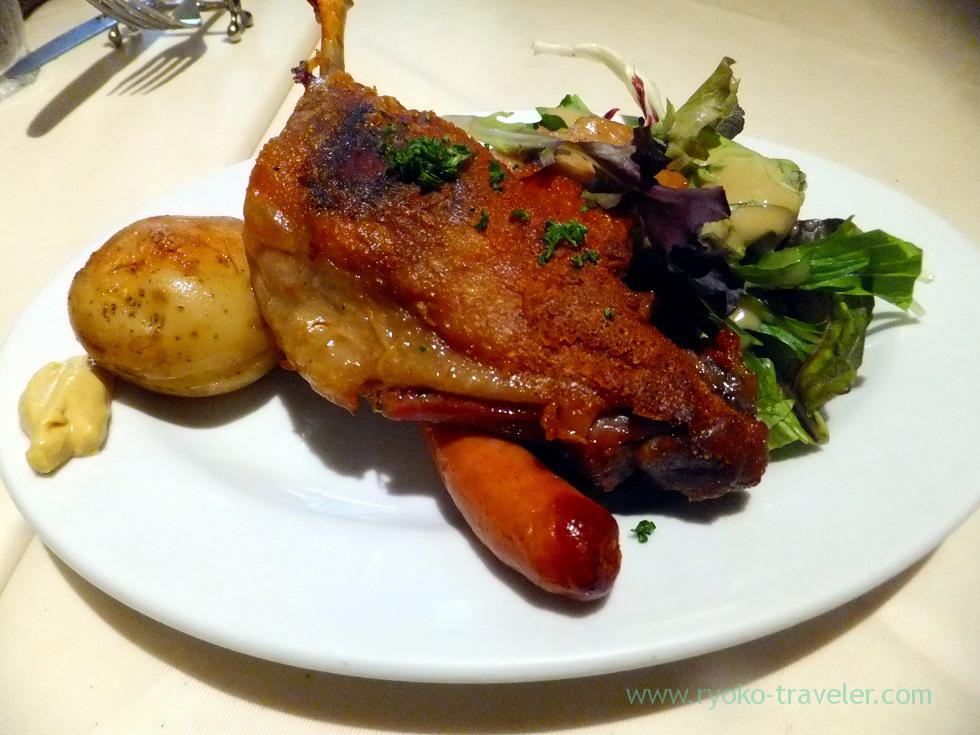 Wooow !! meat under the meat !! long sausage ! Nevertheless just the duck’s leg was enough big !!! A whole potato was there, too !
The confit was salty and it was hard to eat up if I ate it by myself. 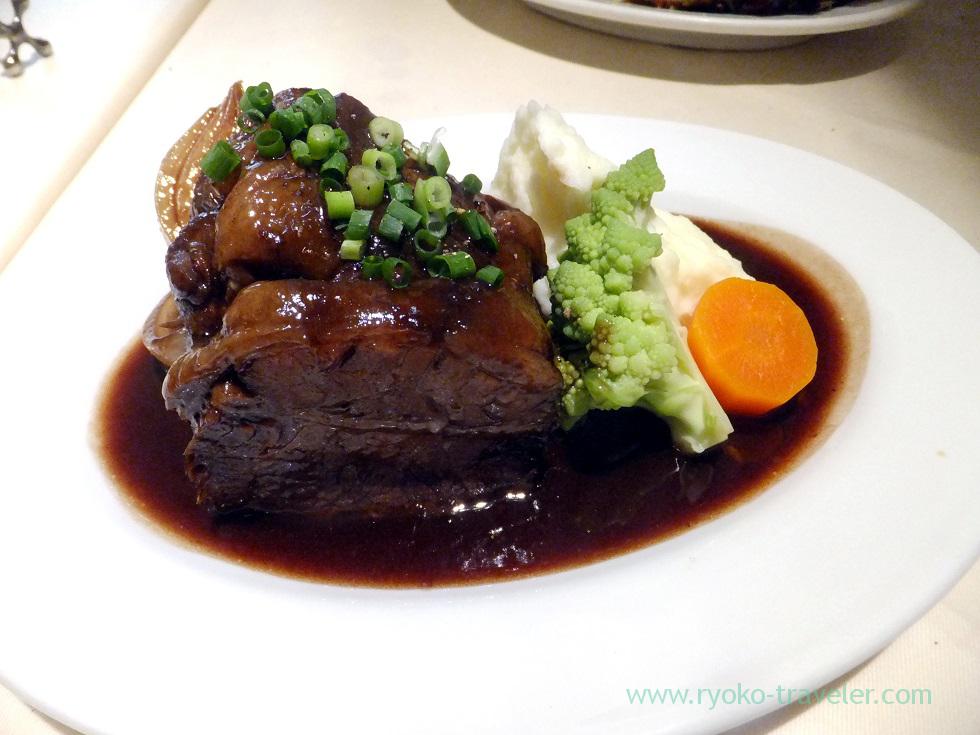 It had strong color, but it was quite lightly seasoned compared with the confit.
Snowy mountain behind the meat …. that is mashed potato !!! 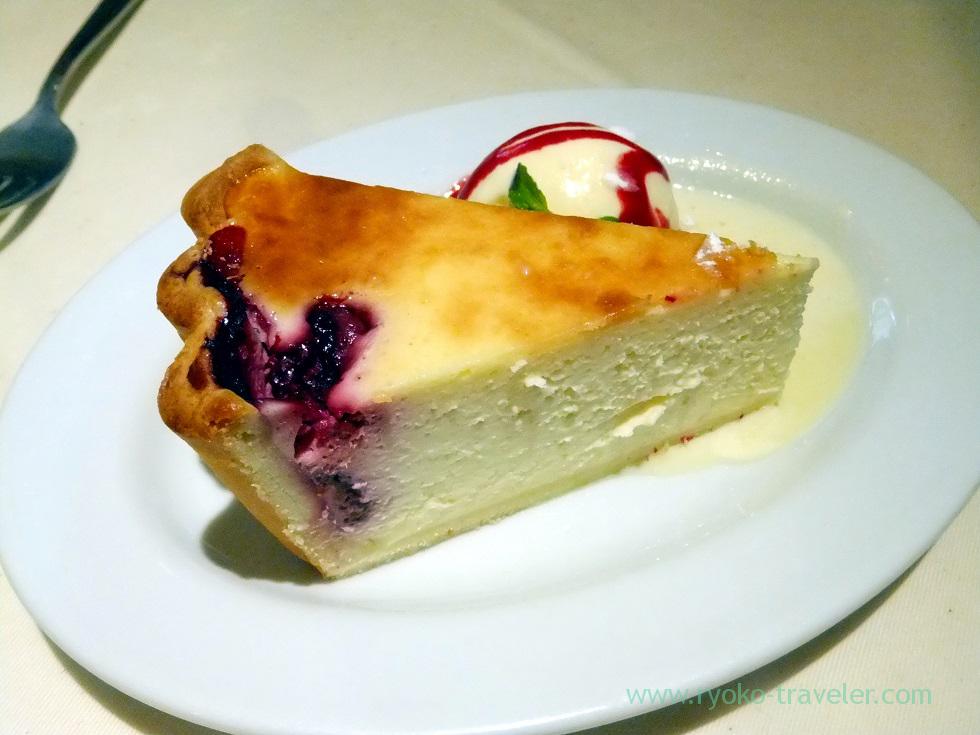 It looks heavy, and actually it was heavy…. though it was tasty. It was too big for us after eating entree. 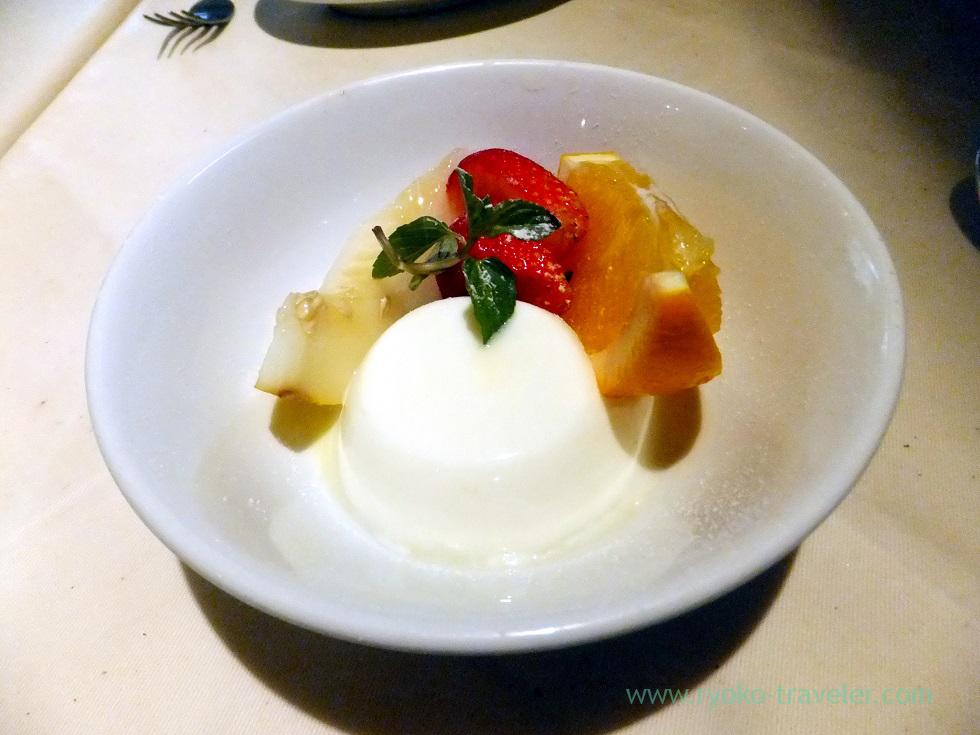 Though I ordered my drink mint tea, but somehow rose hips tea was served by mistake. 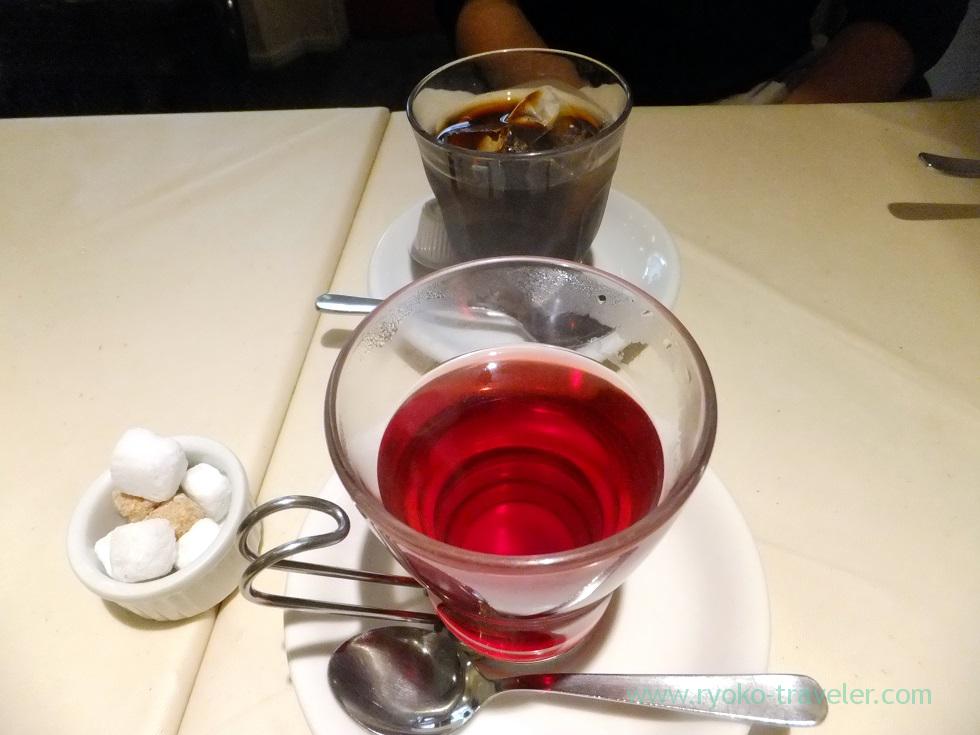 Well, to tell the truth, the waitress mistook my appetizer, too. I asked the waitress to change my appetizer.
I was over full and I couldn’t think well. So, it was troublesome for me. I didn’t say anything and I drunk it up.

As a whole, those were great in quantity.
And those were well seasoned, but the quality of meats were not good and the good skill of cook made those meats much better.
It was tasty, so I enjoyed eating while my stomach wasn’t full. But when I felt near full in my stomach, I was irritate the quality of the meats a bit.

They serves hearty meal with inexpensive costs, so it was not good for me who is poor eater.
Well, I left much meat in Hawaii, too. (The guests around us ate up their dishes easily and I felt I’m poor eater….)
I want to eat better quality and smaller quantity meats.

Inexpensive seafood bowl is outside the huge market I felt guilty to use a clean 1000 yen bill, but  I had wanted to ea...

We went to old kissaten in Tsukiji that is ending their business the end of this month. Kissa Hiyoko I had just ...

We went to the ramen shop named Ramen Itto (麺屋 一燈) that is one of the most popular tsukemen in Tokyo. I think everyone ...

Hajime sengyo-ten is great in 2015, too Recently I usually have lunch at Hajime Sengyo-ten when I go to Tsukiji at ...

Their fried fishes with butter is awesome. I went to Odayasu to have breakfast the other day. Recently, Odayasu have l...
Charity curry 2014 Spring !
Honolulu 2014 (1/7) : In-flight meals and acai bowl !