My friends and I visited Ginza Shimada the other day.
As its name, Ginza Shimada is located within Ginza area being a little distant from the busy street.

The appearance have fancy atmosphere of Japanese cuisine restaurant. 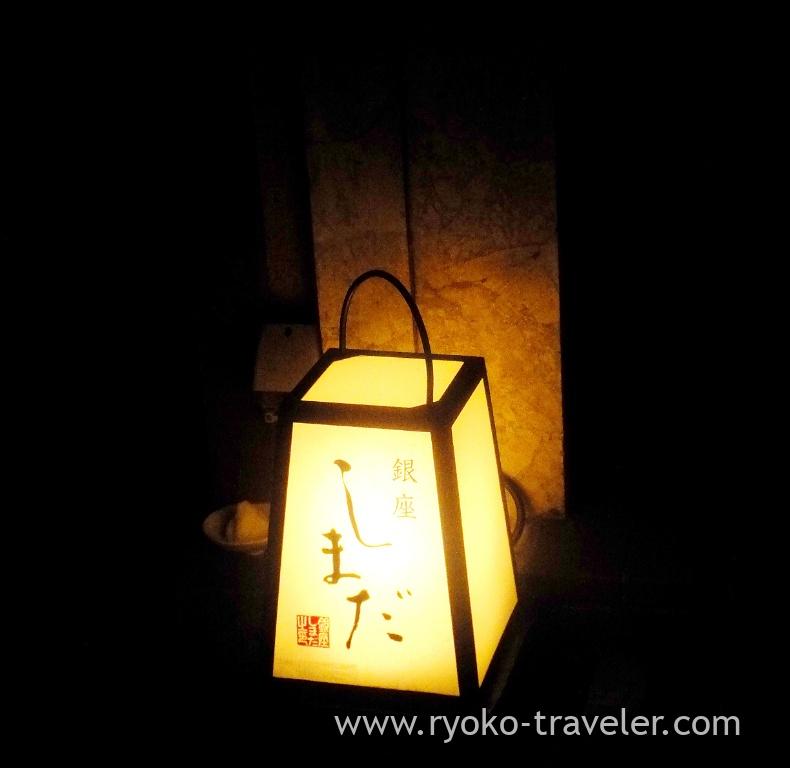 But this house have no seats except four seats surrounding one table.
And another, there’s only L-shaped counter table and there’s no seats along this table.
Yes. This is not luxury Japanese cuisine restaurant. It is narrow and small stand-up-drinking izakaya.

Basically, they don’t accept reservation in advance.
But only the table having four seats can be reserved.
So, you can imagine. Taking the reservation of this table is so difficult !

Why is Shimada is narrow like this ?
Because. they save money for serving good dishes as good as Japanese high quality restaurants’ at cheaper prices.
Shimada is managed by the campany that manage “Ore-no-Italian“, “Ore-no-French” etc. Though Shimada don’t have “Ore-no” on their name.


Yaesu : Ore no Italian (俺のイタリアン)
Valuable Italian Dinner. Now, one of the most popular restaurant and the most difficult to reserve restaurant in Japan ...

Anyway, we managed to put our baggage and our bodiesto the seats and then made a toast. Cheers ! My drink was Hakusyu Highballs (Hakusyu whisky with soda)
There’re not large variety of drinks. Beer, Japanese sake, Highball, Shochu, Plum liquor, oolong tea. That’s all. 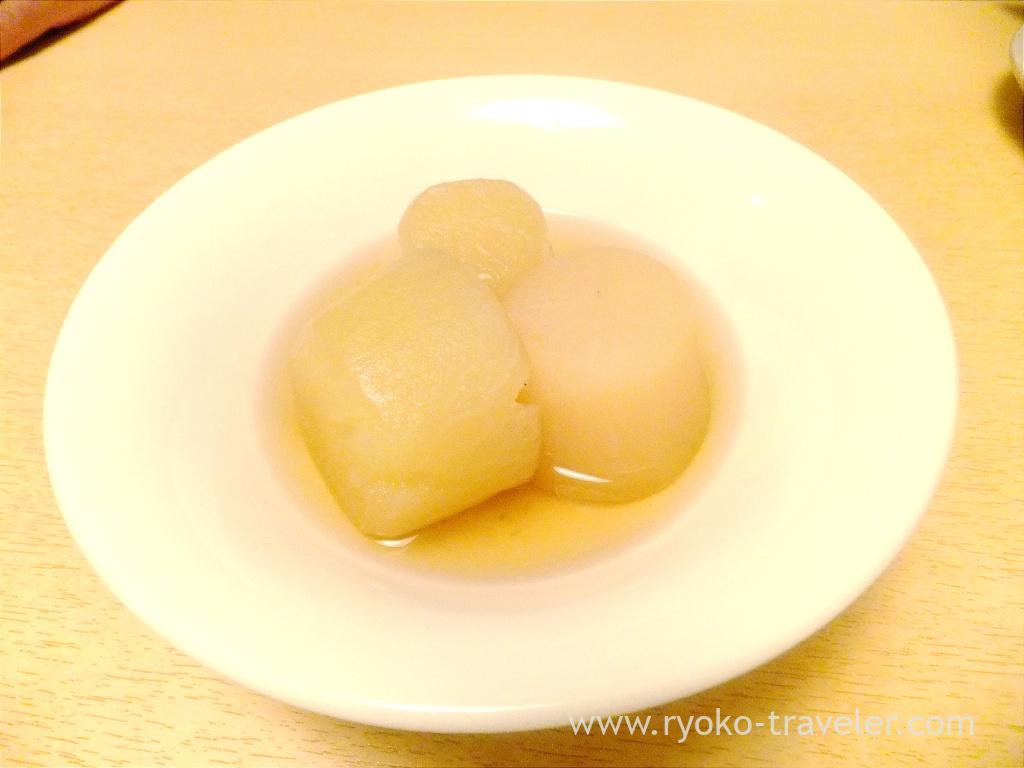 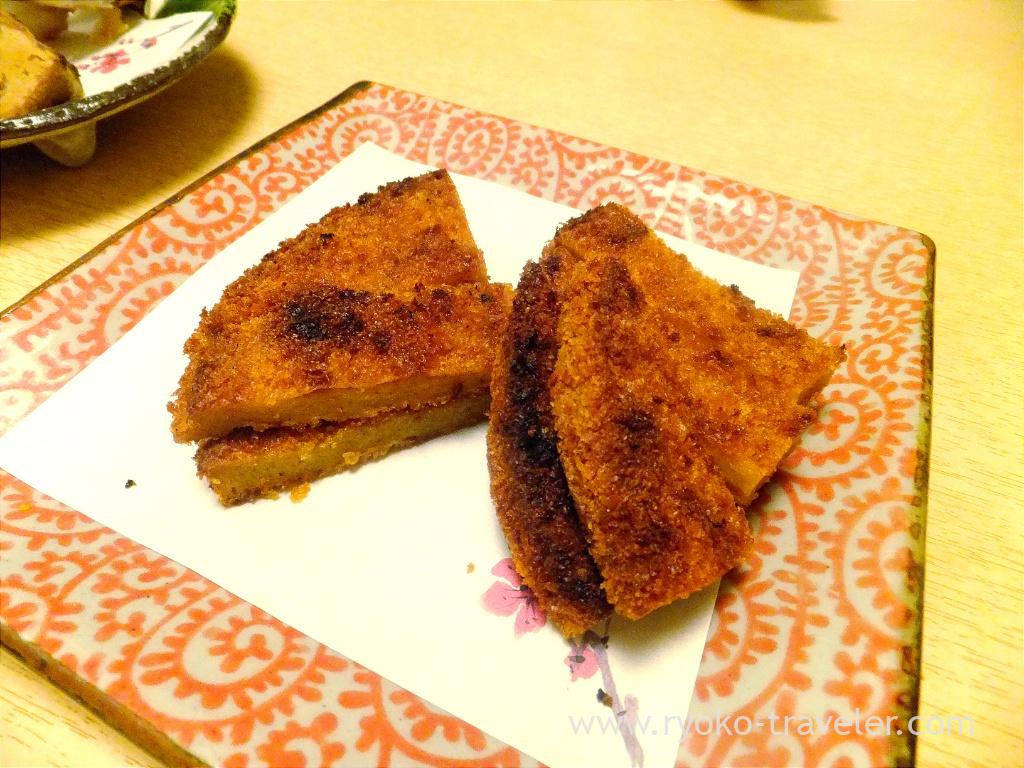 Herring and eggplant (ニシン茄子) 1000 yen
Herring is the taste of Spring. 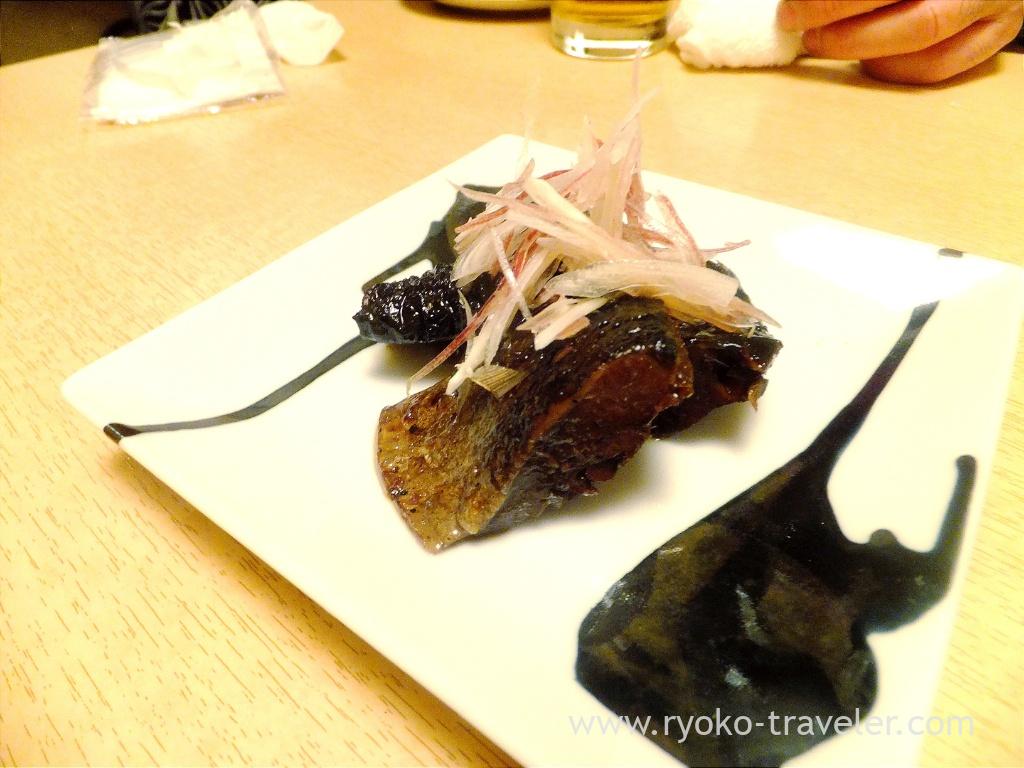 Snow crabs cram croquette (ズワイガニのクリームコロッケ) 1400 yen
I forgot to take the picture of the section, but it had more snow crab’s meat than cream sauce. My mouth was full with the taste of snow crabs !!! 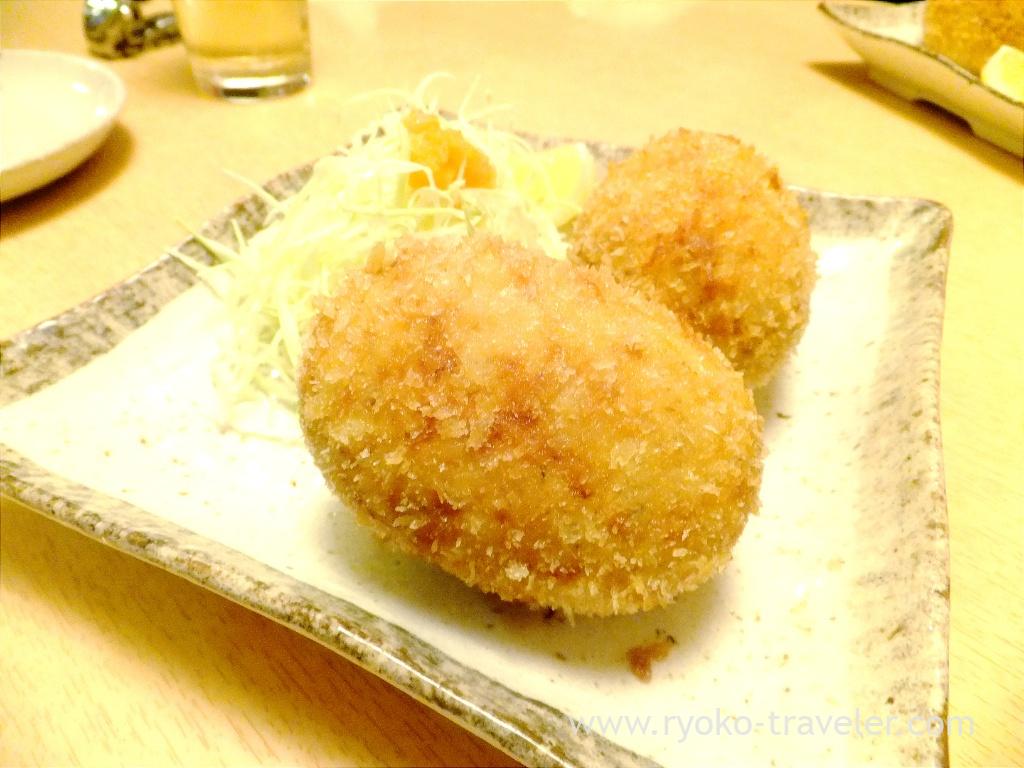 Sea urchin with spiny lobster jelly (ウニの伊勢海老ジュレがけ) 1600 yen
I couldn’t take the picture well, actually, it is more nice orange-colored foods. It is delicious. It had full of spiny lobster taste ! 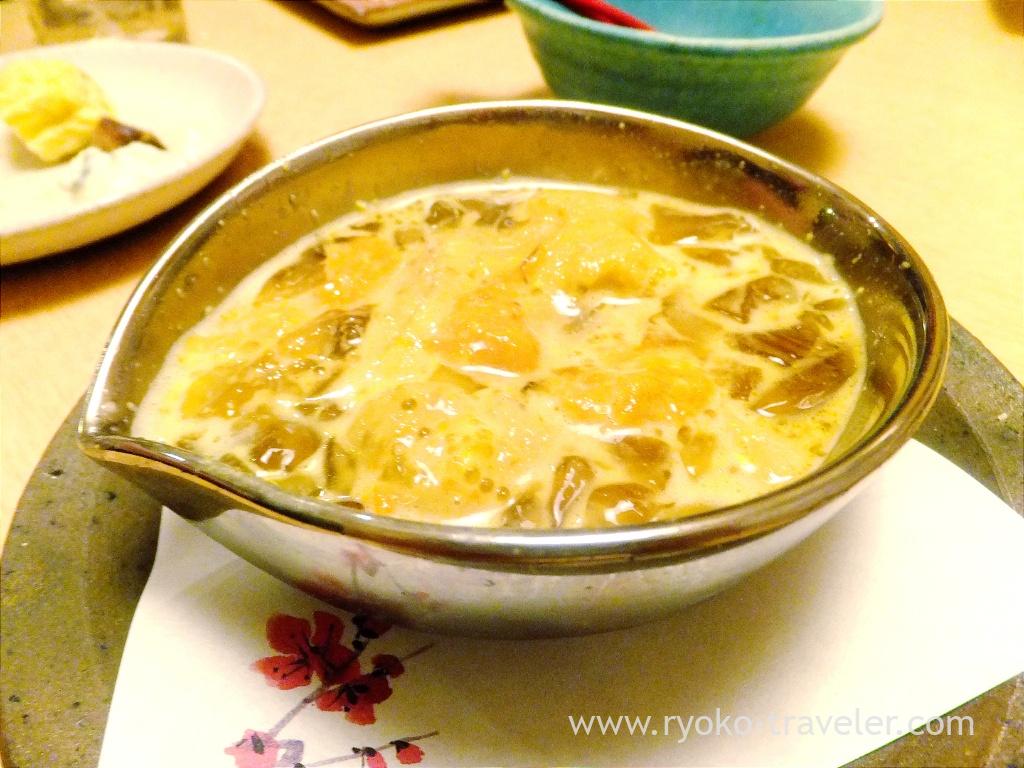 Japanese black wagyu cutet (黒毛和牛のビーフカツ) 2000 yen
It was Round tip of the beefmeat.
The sauce is brown sauce. But I felt soy sauce with wasabi is better for the beef cutlet. BUT the beef was juicy and fat !!! 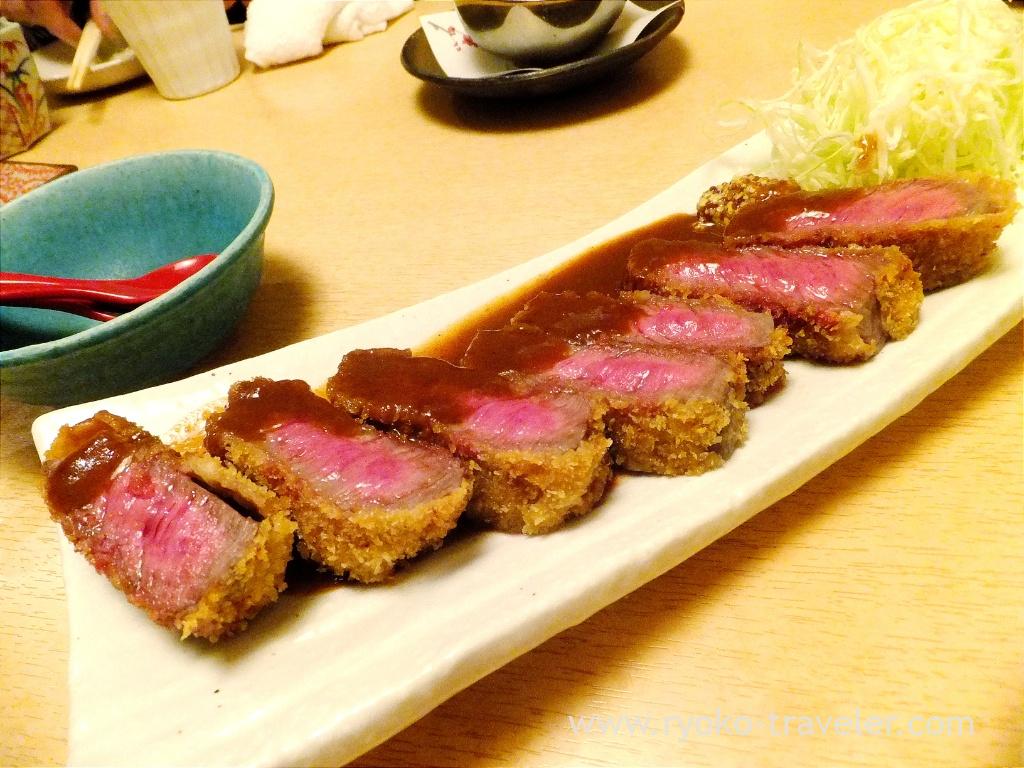 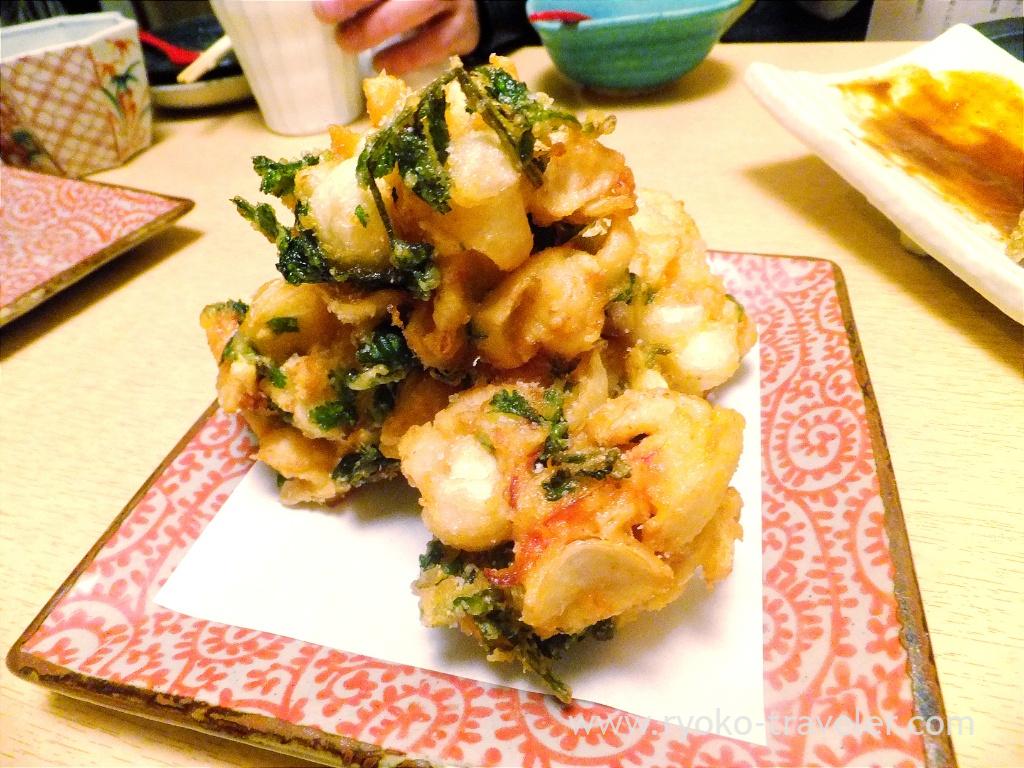 Grilled ebi-imo (焼き海老芋) 800 yen
Ebi-imo is one kind of taro. One kind of Kyoto vegetables (or Kyo-Yasai).
“Ebi” means shrimp in Japanese. I heard that it is named “Ebi-imo” because it is similar to shrimps from its looking.
…. I saw the whole ebi-imo at Tsukiji, but I didn’t think it is similar to shrimp. It didn’t have shrimps shape ! What is truth !?
Well, apart from it, this had good texture and was delicious. 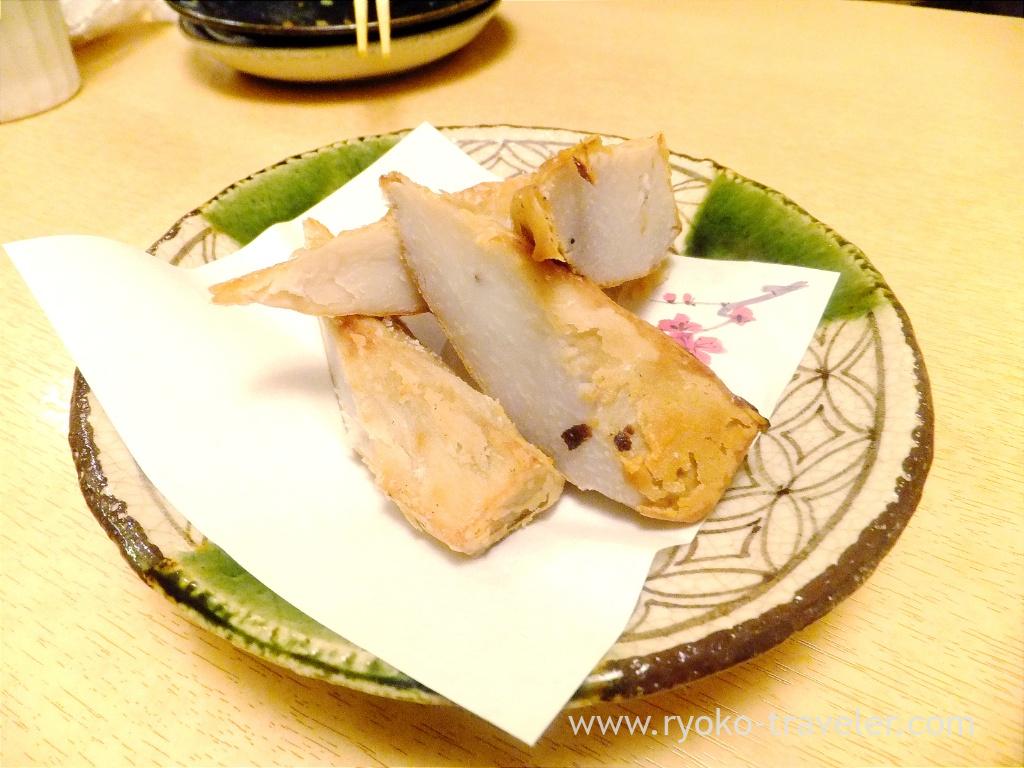 Soft roe, ebi-imo and turnip in a hotpot (白子と海老芋と蕪のすり流し小鍋) 1400 yen
Ebi-imo again ! It tasted lightly and because it was cold that day, so we felt warm thanks to the hotpot 🙂 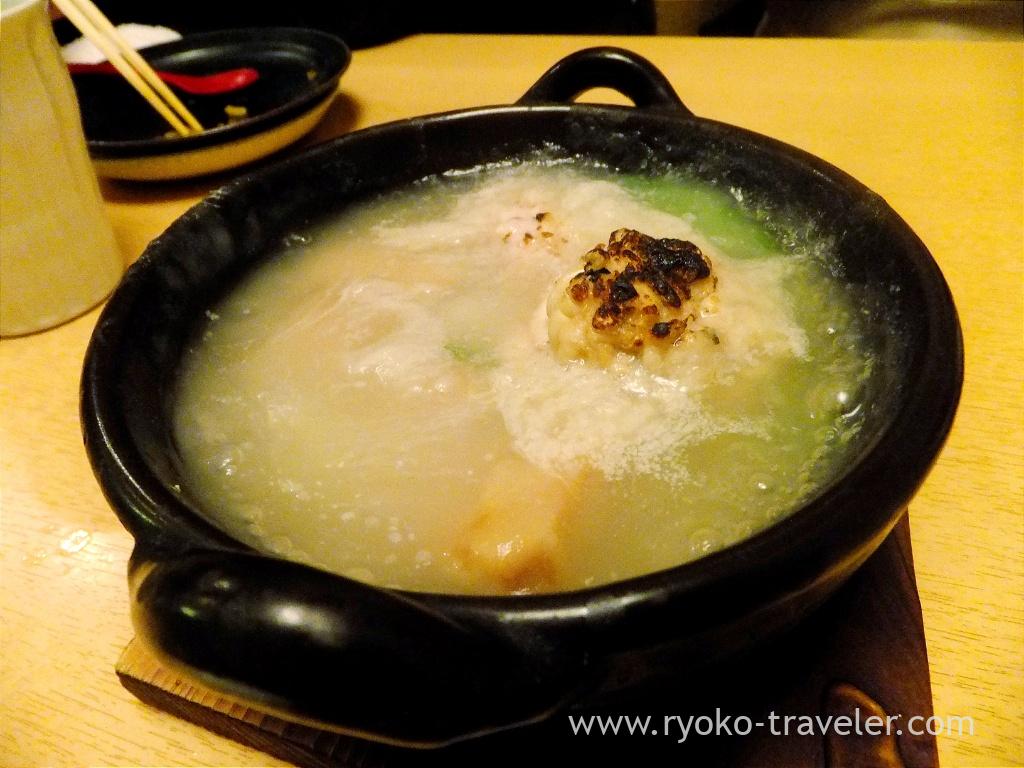 Grilled duck with Hostamontana and hrysanthemum sauce (鴨炙りとうるい菊菜のソース) 1000 yen
So juicy….. and the green is nice 🙂 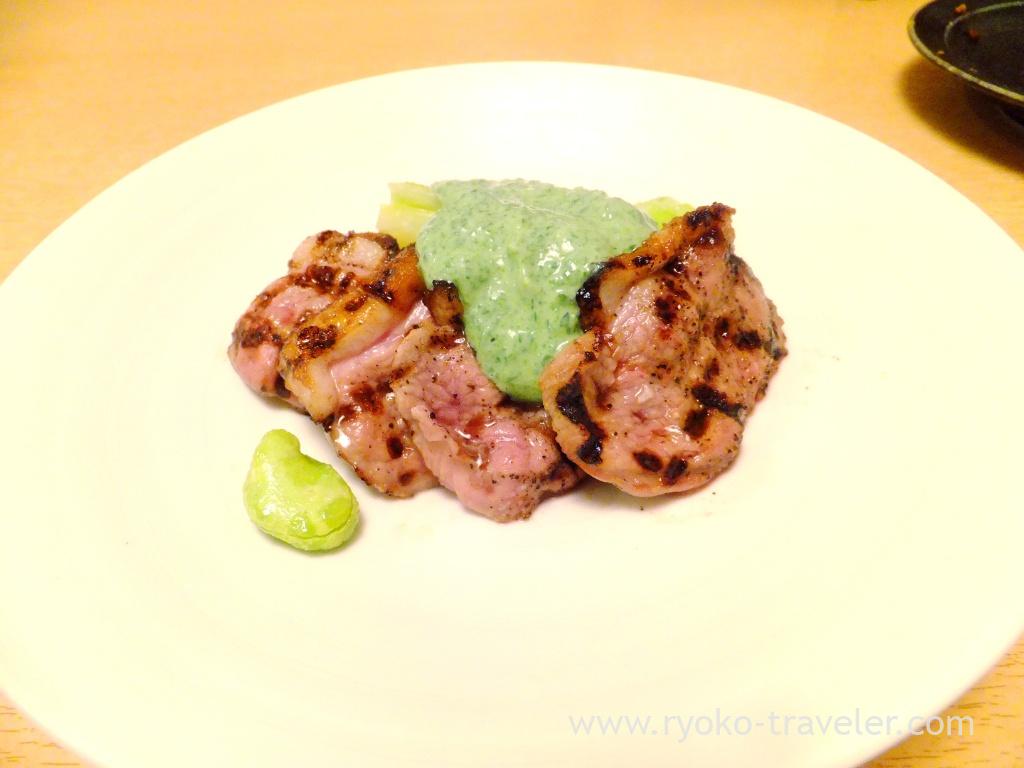 And the bast food that I had that day was it.
Bachiko (ばちこ) 2500 yen
Dried sea cucumber’s ovary. I didn’t know it at all.
It textured thick and sticky. It tasted very good. I’ll try to buy it on the internet soon. 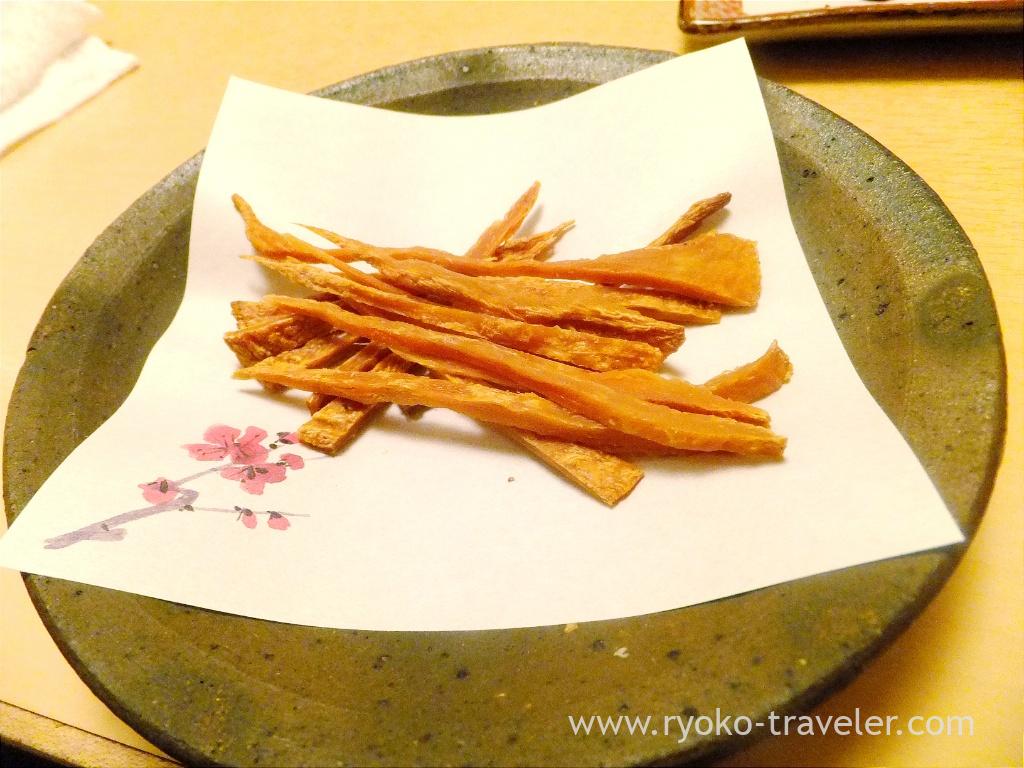 Tamagokake Gohan (卵かけご飯) 500 yen
Speaking of ingredients of tamagokake gohan, egg, rice and soy sauce. That’s all But this shop’s tamagokake gohan also have much shredded Parmigiano Reggiano on it !
It had a egg, but we can’t see on this phtoo ! So much cheese ! 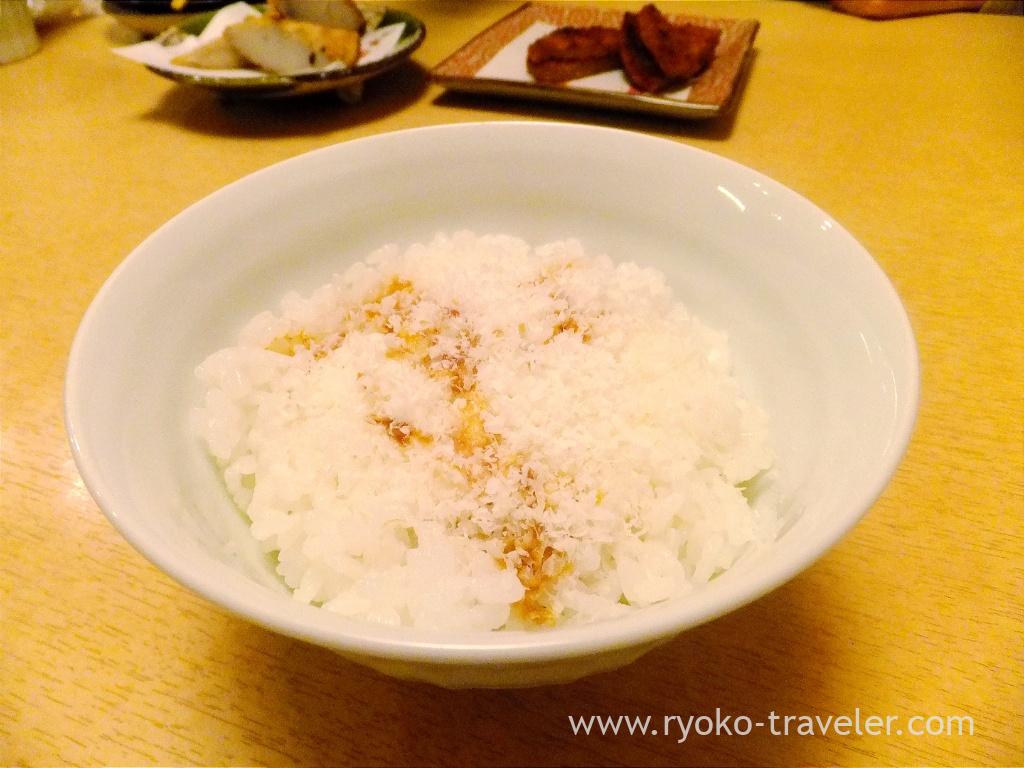 The photo was taken after mixed altogether well. It looks like ordinary tamagokake gohan, but because of Parmigiano reggiano, it had rich taste.

I want to try it at home, too. 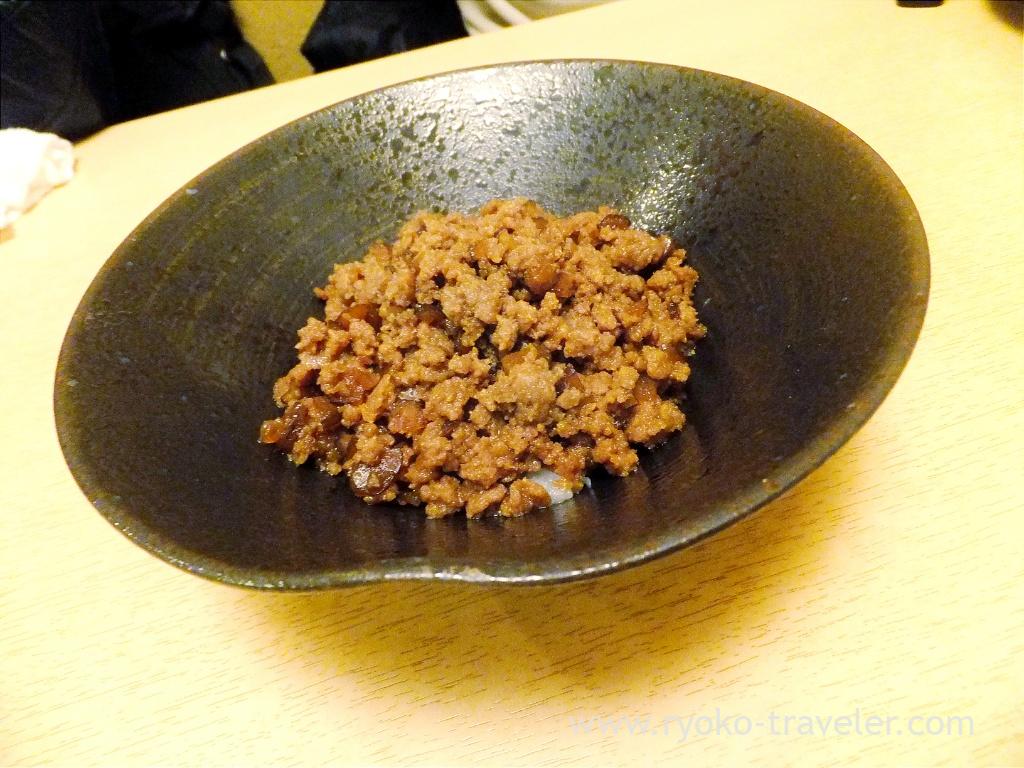 And last, we finished our dinner time with the advertising food of Shimada is it.
Soba with mullet roe (からすみ蕎麦) 1600 yen
So much shredded mullet roe on the soft soba.
We lightly mixed altogether and then ate.
The soba itself didn’t have strong taste. Mullet roe seems to be leading actor on the dish. Awesome.

Though they don’t hav e various foods to serve, they serve absolutely delicious dishes that have seasonal ingredients at lower price 🙂
I’ll go there again in a few days. So, I’m looking forward to eating the soba with mullet roe and beef cutlet again !

I went to Enji for lunch along Konparu street in Ginza area. I heard they serve smoked hamburger steak at lunchtime ! ...

Cold yellowtail season will be out soon This will be the last time to eat it on this season. Yonehana's Pickled cold y...

odayasu's continuous challenges attract us I heard that Odayasu started to serving deep fried kichiji rockfish, so I w...