Finally, I could eat at Segawa !

My friend and I had a tour to Tsukiji the other Saturday.
I can eat at some eateries on Saturdays that I can’t eat at on weekdays early mornings. So, Tsukiji on Saturdays attract me.

So,,, we went to the sashimi bowl shop that is named Segawa along Monzeki street that I can’t go on weekdays early mornings.
I have wish list about Tsukiji. One of my wish was going to Segawa.
I had wanted to visit there for more two years ! 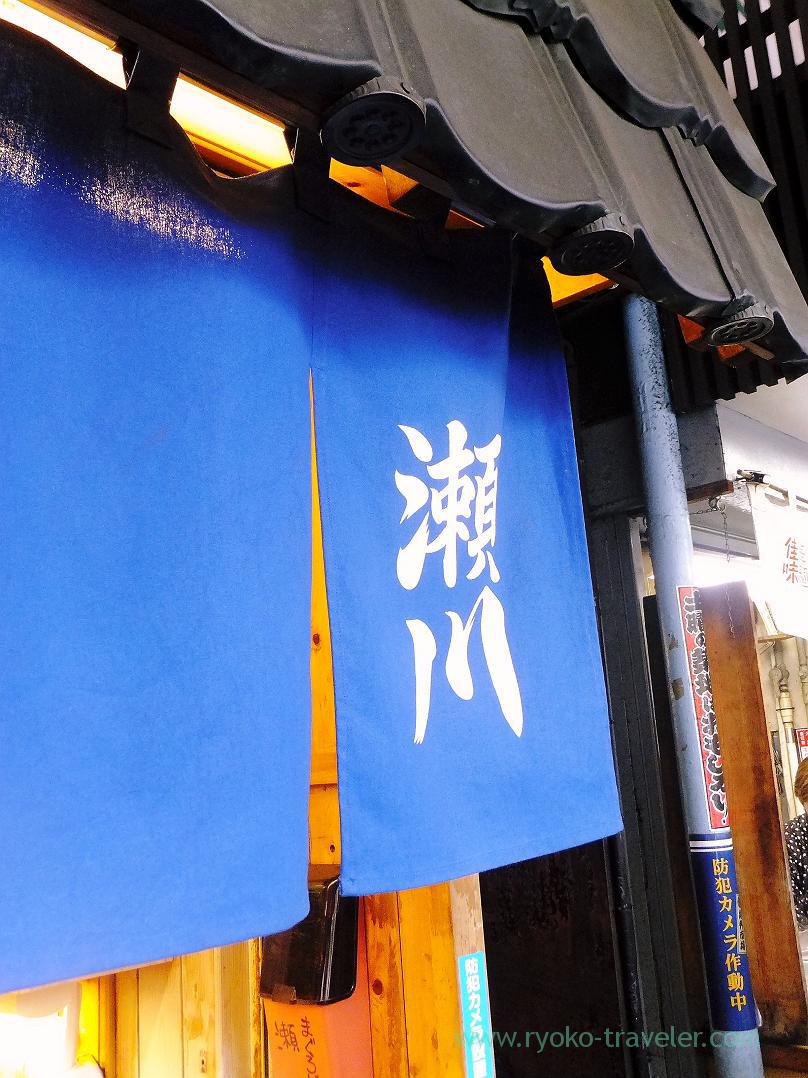 This shop opens from 8 a.m., and my office starts from 8:50 a.m., so it’s impossible for me to go there on weekdays.
AND, this shop had been closed for about two months because the mistress had been in ill.

But I heard that the mistress recovered and open her shop again finally. Finally, my wish came true.

I don’t like marinated chu-toro much, so I ordered a Maguro-Donburi. And my friend ordered Imadake-Donburi. 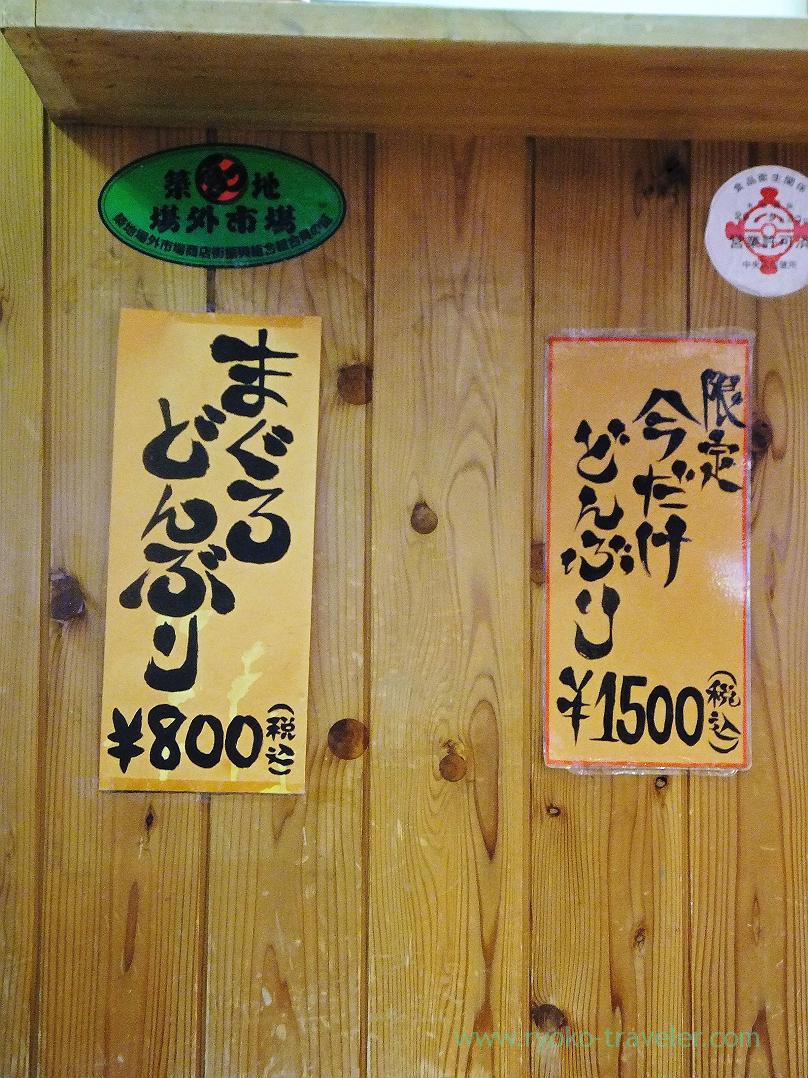 We have to pay the bill when ordering 🙂 After payment, our green tea and pickled vegetable came. 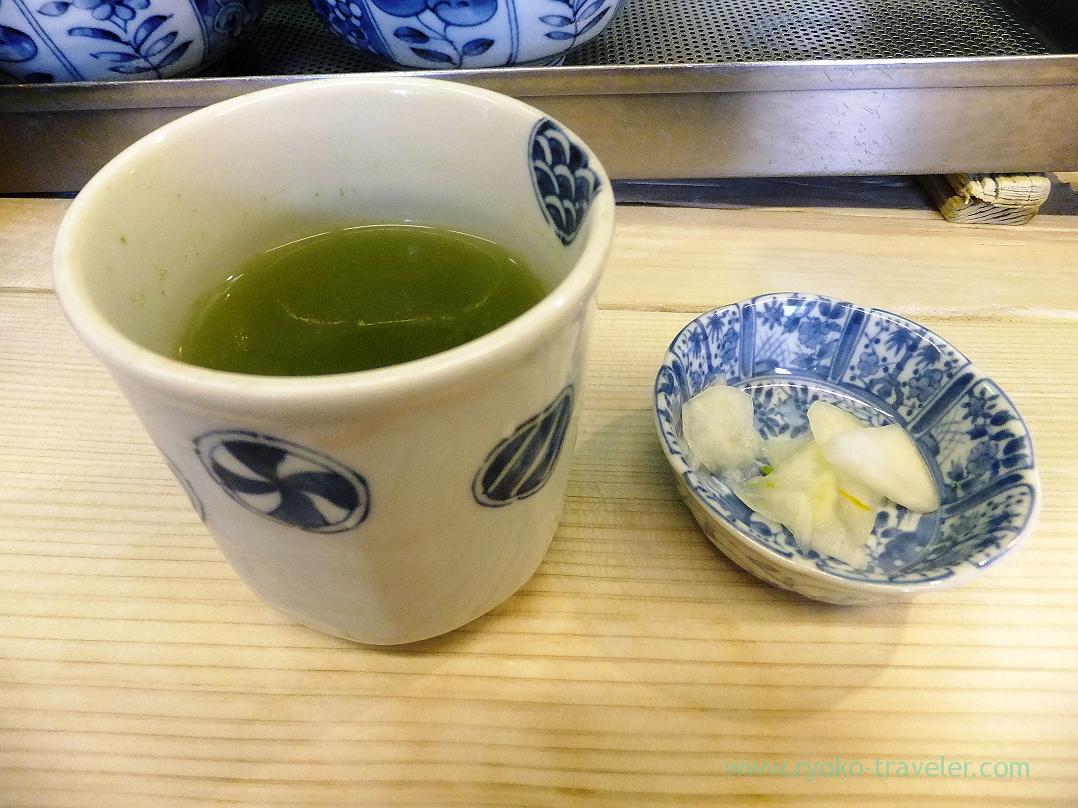 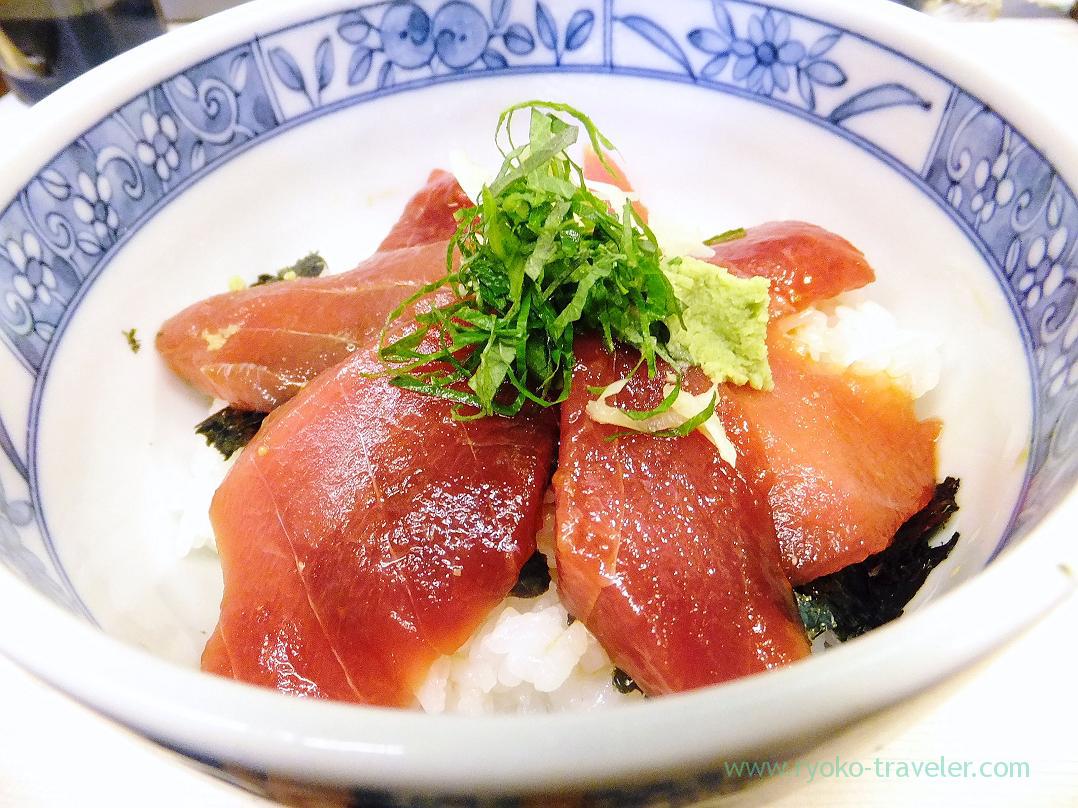 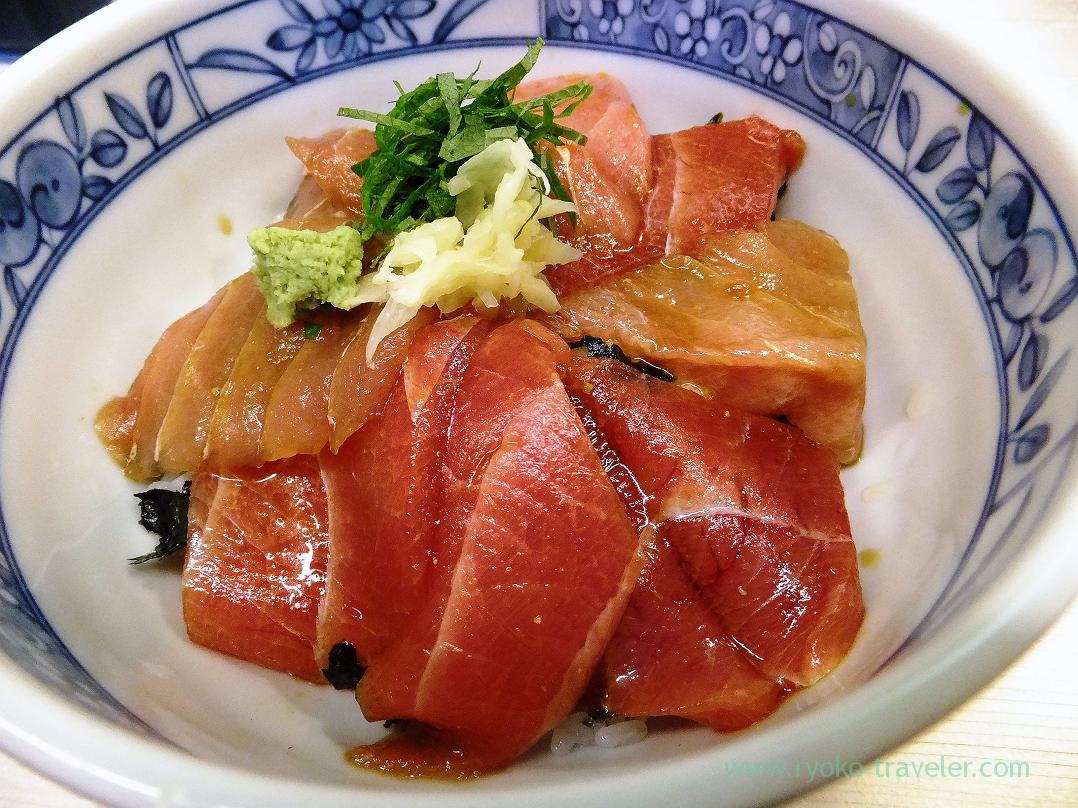 I didn’t notice it when eating, but Imadake-Donburi have much slices of tuna than “Maguro-Donburi” :O
Marinated chu-toro was tasty, but I don’t like the fat of chu-toro soaked into the rice…

After that we went into Tsukiji Market and we ate at Tenfusa. Truthfully speaking, I didn’t want to go to Tenfusa because I can go there weekdays early mornings 😛
But, well, my friend participated in my Segawa going, so, I also participated in his wish 😀
Assorted tempura (天ぷら盛り合わせ,1200 yen) and sweet potato tempura (さつまいも天, 200 yen) 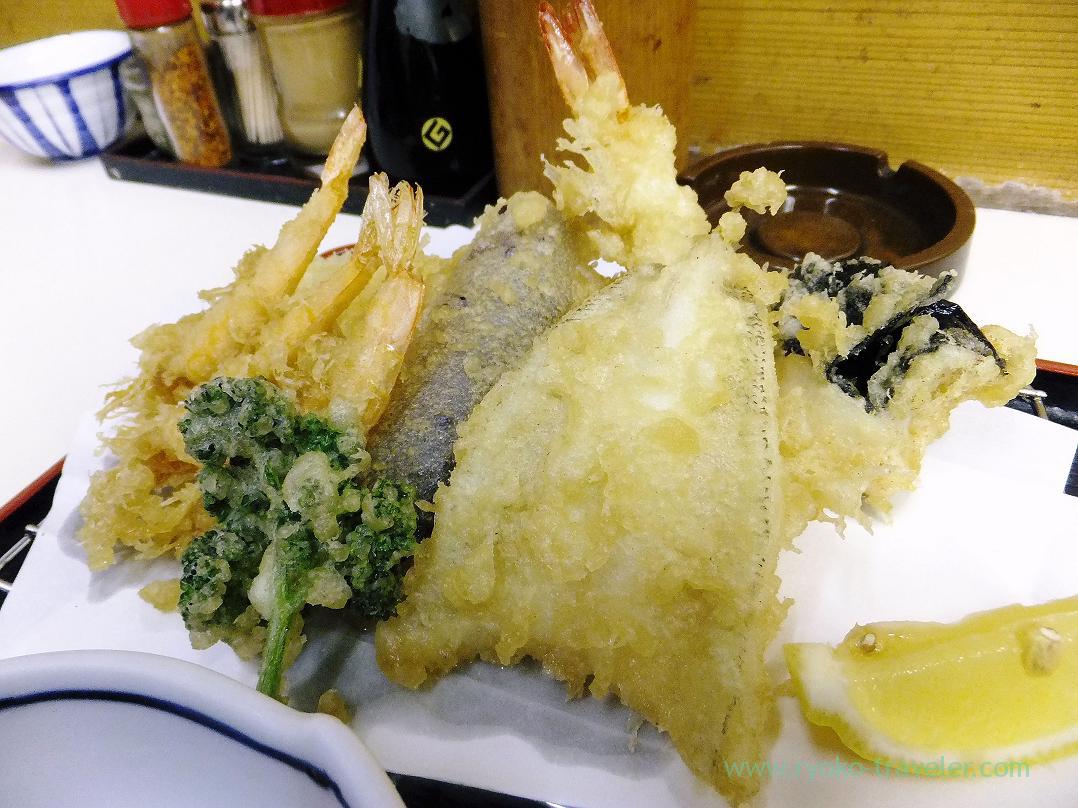 Tenfusa that day had only parsleys, eggplants and sweet potatoes. 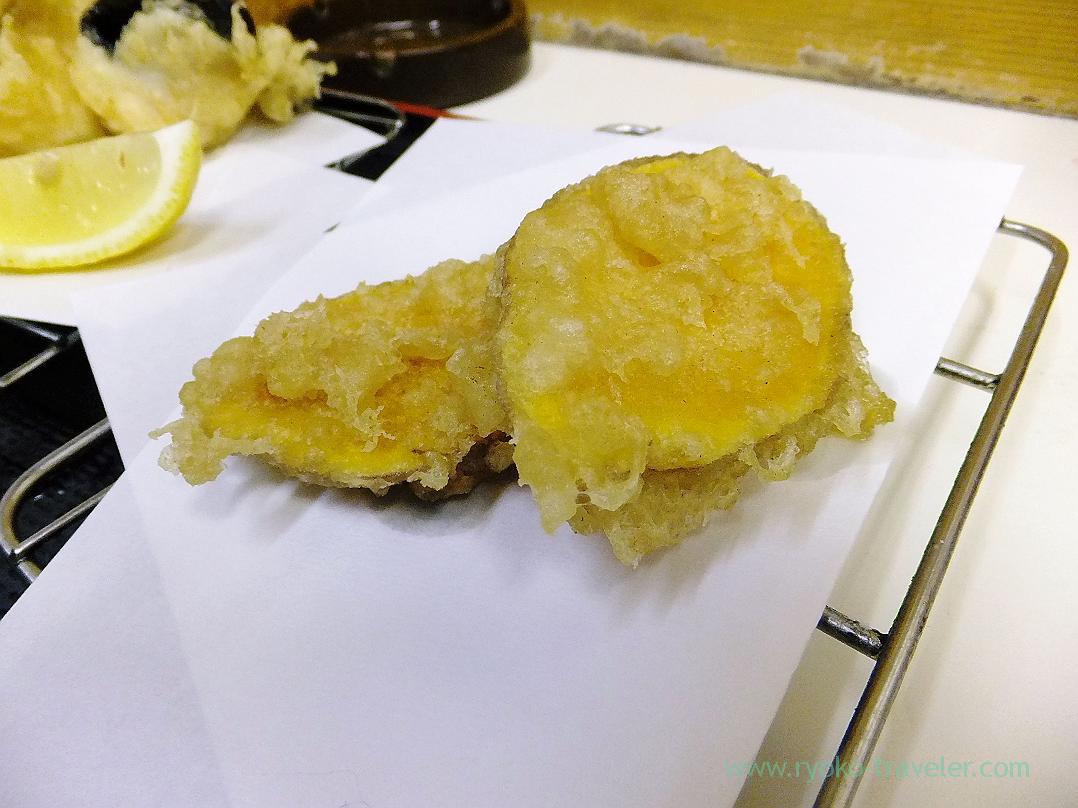 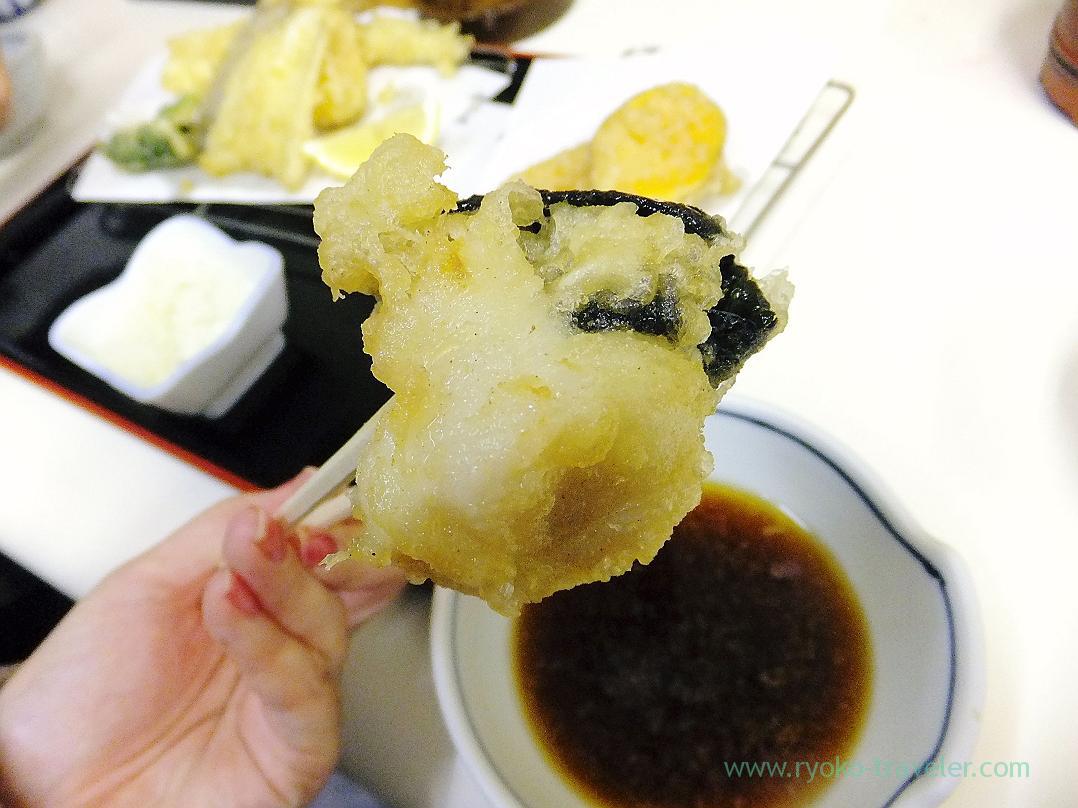 This post’s title is “Two in my wish list…”
That is not the end. But I’ll tell you the rest of the story next time 😉

(Notice) Kissa Mako already quit their business. (July 11st, 2018) Tsukiji have many cafes because there are so ...

Tsukiji Market : Liver yakitori bowl by myself at Yonehana

Yonehana's liver yakitori is No.1 ! I headed to Tsukiji the other day to eat oyakodon at Torito, but while I was in t...

Galette time ! I went to the cafe that have high reputation of galette ! This shop is close to Jinbosho that is a town...

I went to hamburger shop that named BROTHER'S , standing at Shintomicho near Ginza. It is in the front of Shintomicho m...

Asari clam noodles until this month ! Though recently I can't wake up early, but I managed to get up and went to Tsuk...
Iwamotocho : Soup curry with lamb at Kamui (スープカレーカムイ)
Funabashi : Hatsumode 2014