Well, I feel like eating spicy curry in hot days. Especially this year !
That’s why I went to popular Indian foods restaurant near Nishi-Ojima station that is named Maharani.

Kiba : Tandoor bar (カマルプール)
Tandoori foods with alcoholic drinks. My friend asked me to join dinner at Kamal Pool. It is tandoor bar. They serve Indian dishes. Stylish bar :) We toasted with drinks ! At f...
www.ryoko-traveler.com

Too hot for me ! (Ginza)
I ate curry and rice at Delhi, Ginza. Well,,,, its color doesn't seem foods :( It seems inferno. It seems really hot. Kashmir curry （950 yen） It was so hot that I thought I get out the restaurant ...
www.ryoko-traveler.com

Fukagawa Indian Lunch(Monzen-nakacho), and Pakistan Bazar (Ueno)
There is an izakaya that serves Indian lunch set on Sundays lunchtime only near Morishita subway station. It's ordinary an izakaya appearance. But some notices in front of the izakaya shows you that i...
www.ryoko-traveler.com “Today’s curry” was keema with eggplant. At lunchtime, we can select one from some sets. Those sets are different in accordance with its amounts.
And we can select our curries from “today’s curry” and some curries. We can also choice the degrees of spiceness. Such a system can be seen at many Indian restaurants 🙂

I choiced my curries “today’s curry” and mutton curry with very hot. Those are quitely different !
Umm.. Rhyno’s was not hot at all 😛

Springy, springy naan at "Rhino" (Monzen-nakacho)
There is a curry restaurant that is named "Rhino" within 15 minutes walk from Monzen-nakacho station. The restaurant started their business last year. My friend said that the naan was so tasty, So, ...
www.ryoko-traveler.com

I’m satisfied with the hotness this time ! But somehow the Indian waitress worried about me 😛
“Don’t you feel so hot ? Are you OK ?” 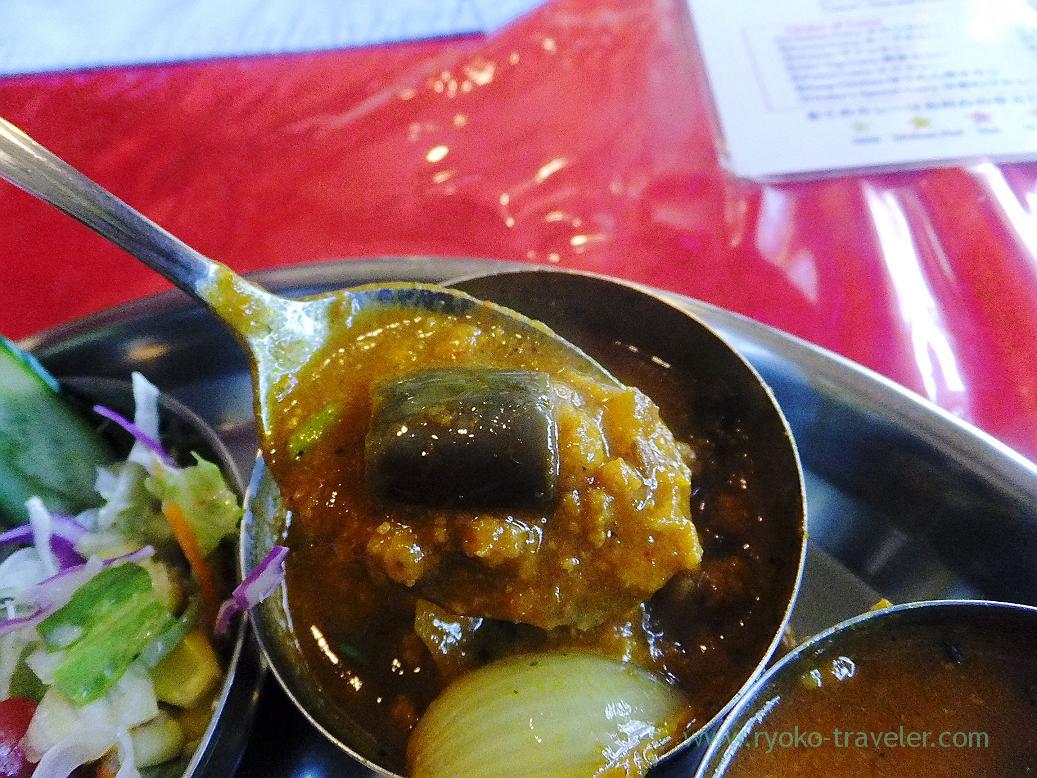 Chicken tikka. I thought it is very big, but it had a bone in it 😛 Still it was big and tasty. After finished eating, I felt like eating chai (チャイ, 200 yen), so I ordered it. After all I paid as same prices as Special set (1150 yen) that have dessert, drink and kebab 😛
But, my meal never finish without chai at Indian foods restaurant !