Nevertheless I have a commuter pass to Tsukiji Market subway station, recently I don’t go there for breakfast.
So, I managed to wake up early and went there.

I often go to Tsukiji at lunch break nowadays. But it don’t need my commuter pass because I walk to there from my office 😛
It’s difficult for me to wake up early in the morning because it’s getting colder.

I went to there two times recently.
Both I had breakfast at Yonehana.

Yonehana serves me chef’s choice, so I don’t need to decide my breakfast 🙂
It’s a little hard for me to decide what to eat because my brain doesn’t awake clearly yet in the early morning 😛

That day, at first, I thought to eat deep fried oysters and fried oyster set at Odayasu. But my stomach was still weak after my recent illness and I thought I should avoid oily deep fried foods.
So, I went into Yonehana.
On entering the shop, I found there was no guests.
Everytime I go to Yonehana, I find it is nearly full or few guests.
Jiro-san said it takes much time to prepare my breakfast. “What happen ?”, I said.

W,well,,,,it’s ok 😛
I waited for 10 minutes or so.it’s longer as Yonehana. This waiting time is as long as eel box serving. 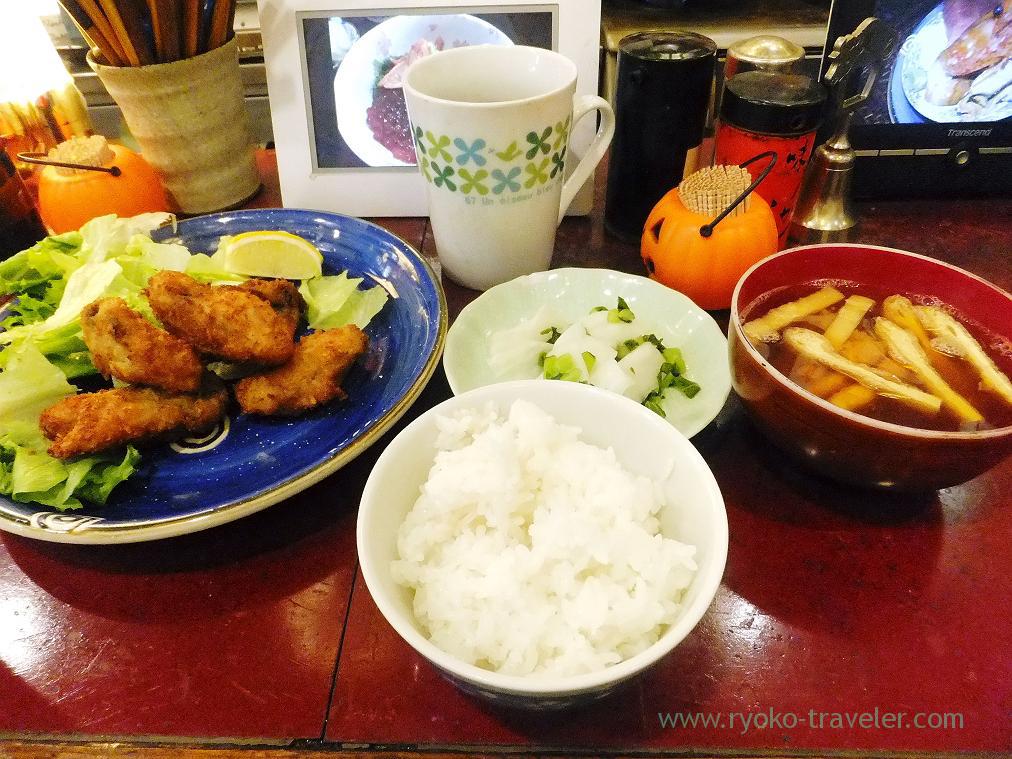 This was the first time to eat deep fried oysters at Yonehana !

I was anxious about my stomach… but those deep fried oysters were crisp and not oily. Those coatings were thin.
The best thing is …. those oysters were splendid !!! I wan’t satisfied with those smaller oysters at first looking.
But those oysters had rich taste of oysters !
I ate it up soon. 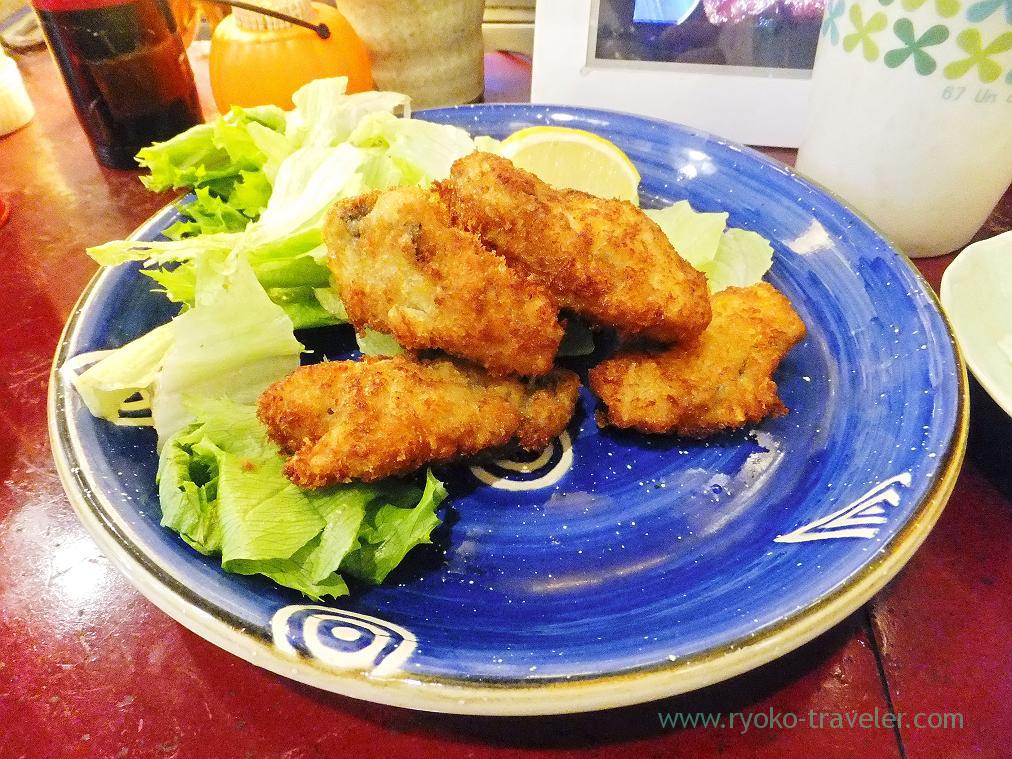 By the way, this is the Yonehana-style. Those leaves were served roughly.
There’s no problem. The mission of Yonehana is serving good foods, not beautiful foods 😉

And this is the chef’s choice of the other day’s breakfast. 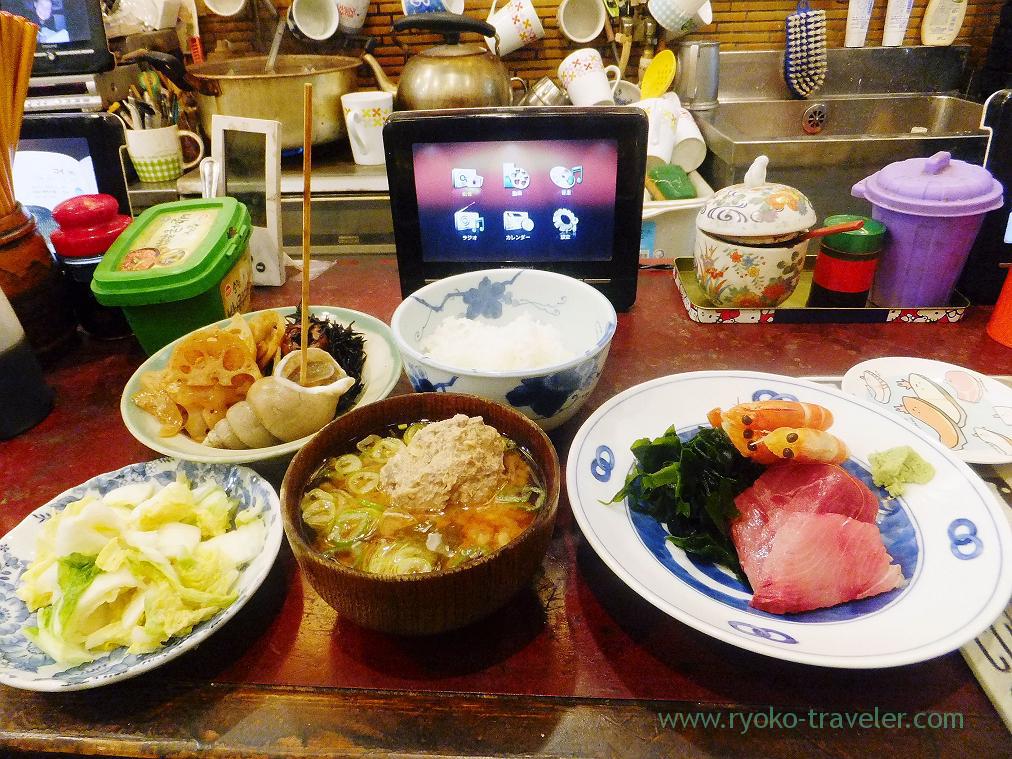 I knew that day’s chef’s choice by my friend’s twittering in advance.
Assorted sashimi. 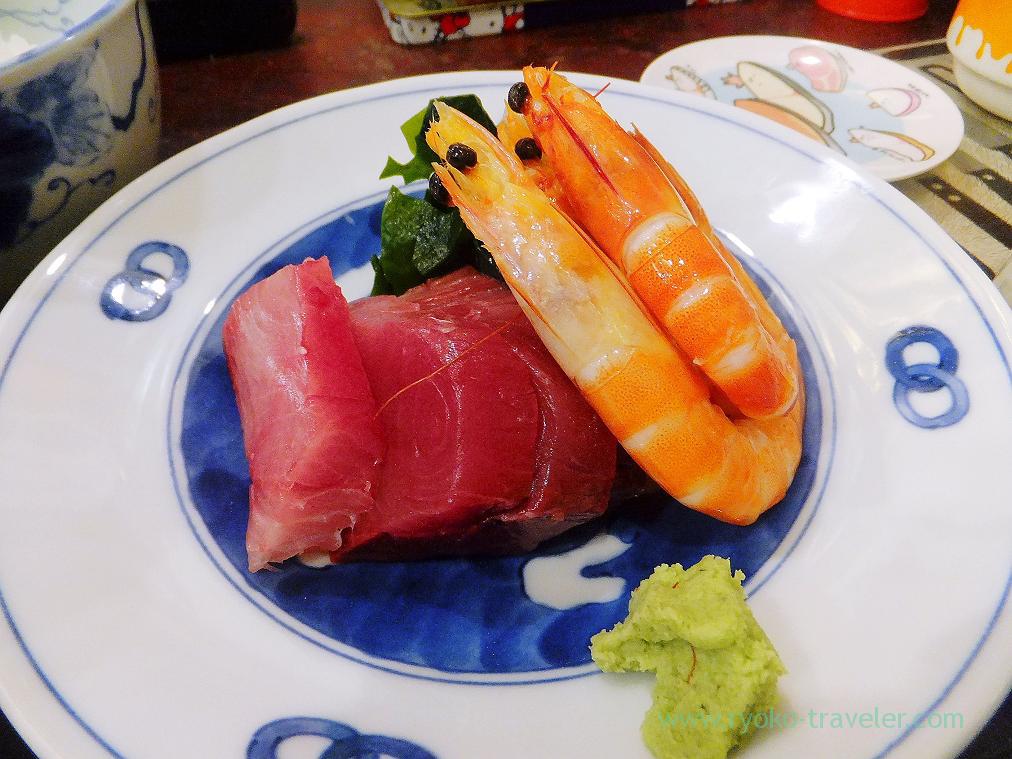 Jiro-san said, “Today we have awesome tuna ! Here, bluefin tuna !” and he placed my sashimi on the table….
It’s anything but tuna….. Yellow tail to all appearance ! Yummy yellowtail and shrimp !
Those slice of yellowtail were sliced thinner as Yonehana ! It’s comfortable !

The side dish was lotus root dressed with spicy sauce, big ivory shell and hijiki ! Fiber-rich ! 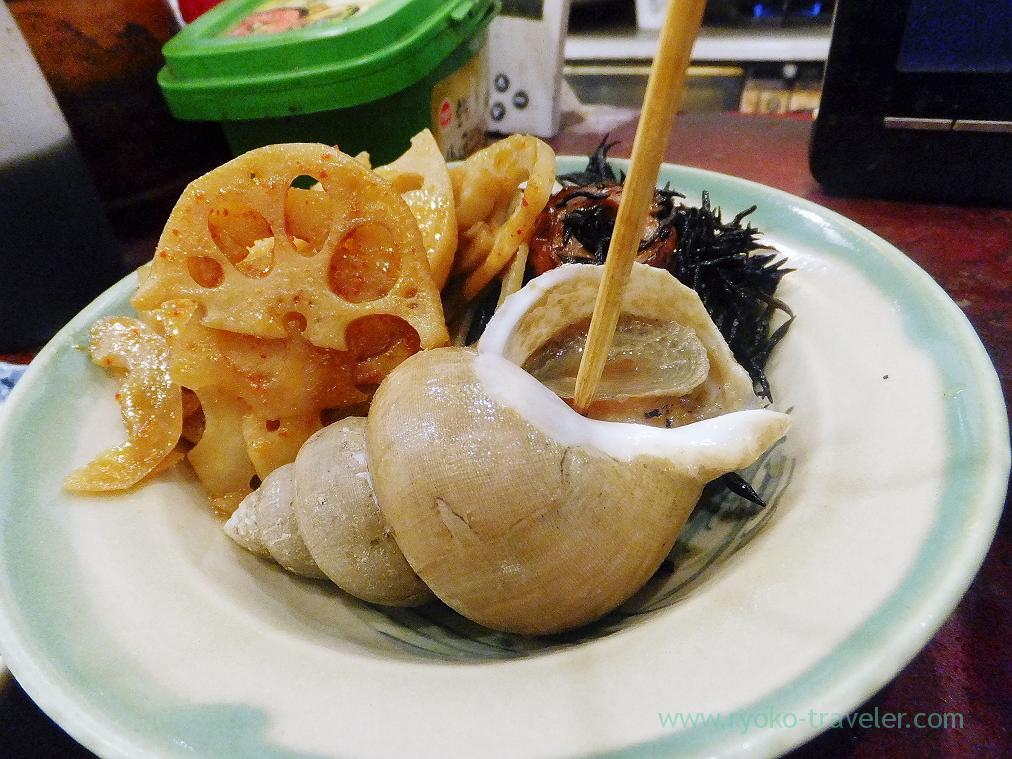 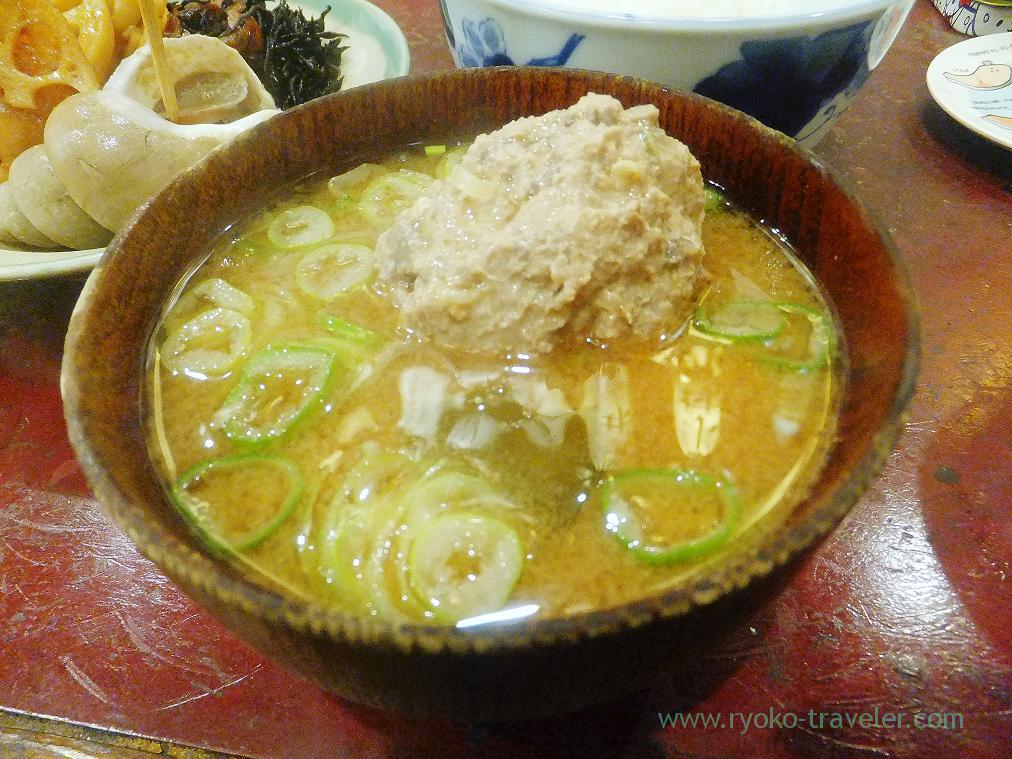 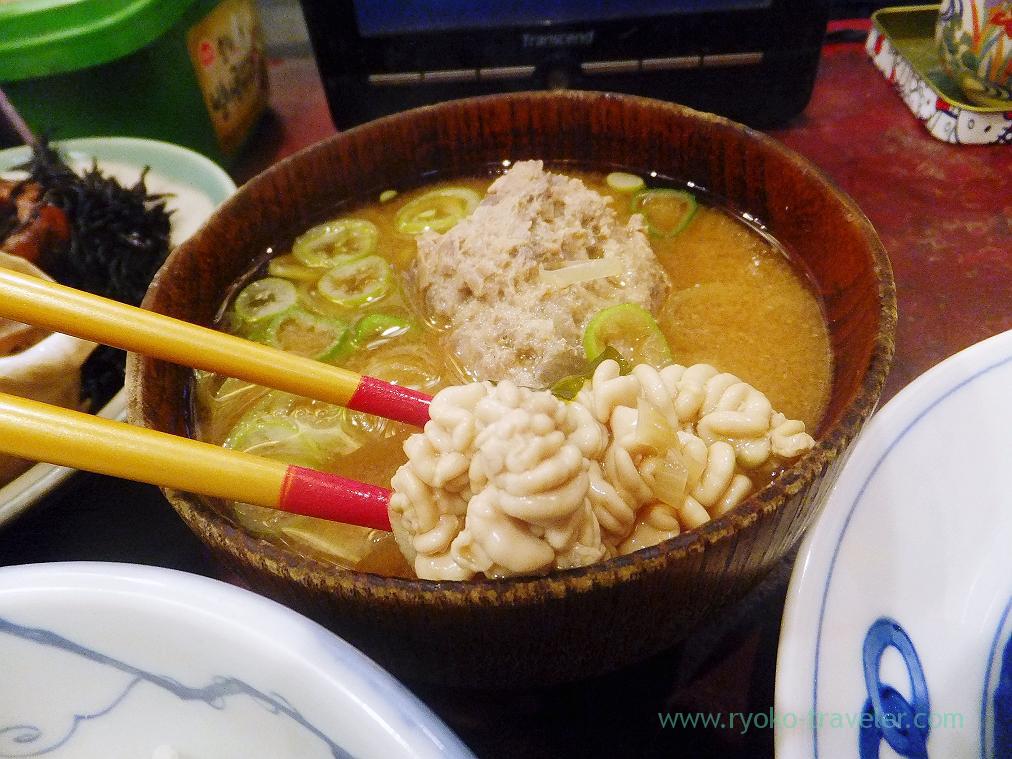 What a gorgeous miso soup that contains soft roe !
I couldn’t order yakitori that day, too. Just this chef’s choice made my stomach completely full !

Also, I became a smaller eater than ever since I had a severe stomachache by cheese. But why don’t I still lose my weight … ?

Precious Danish cafe ! Finally I went to the cafe that I had wanted to go for a long time. It is in the building nam...

Kaki dofu is Winter tastes eaten in Tsukiji Market ! I went to here the other day. Katou I wanted to eat tara ...

Summer tastes. I visited Fruits Parlor Goto again. I was satisfied with great mango parfait last time. And I ...

There is a curry restaurant that is named "Rhino" within 15 minutes walk from Monzen-nakacho station. The restaurant s...