New stand-up-drinking izakaya is open close to my home.
The shop’s name is Tachinomi Watarai. They are open from 2 p.m. So, we can drink in the daytime 😉
The interior can be seen well from outside, so, it’s easy to enter the shop ! 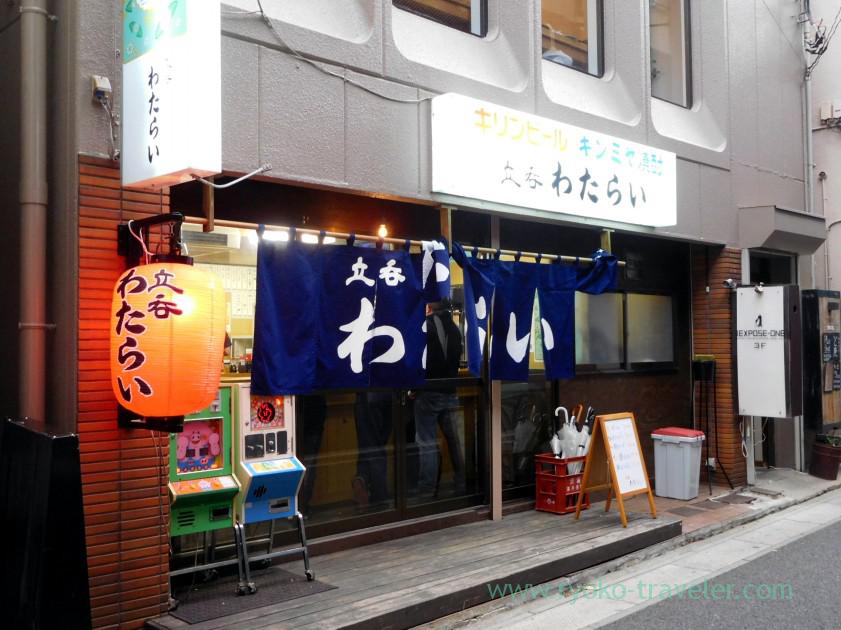 This is the first stand-up-drinking shop by him.
By the way there’s 2nd branch named “Magoshi” in Motoyawata and it’s close to Watarai.

It’s located along railway in front of JR Motoyawata station.
There used to be “Bar moto Sanpei”. But The manager quit their business because of ill. So, they could start their business soon. Watarai use former kitchen without change. 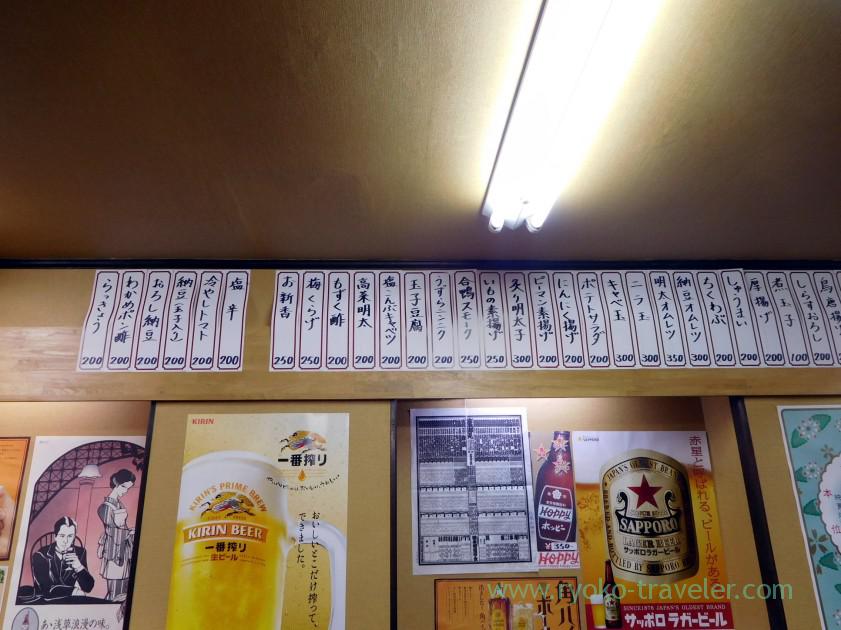 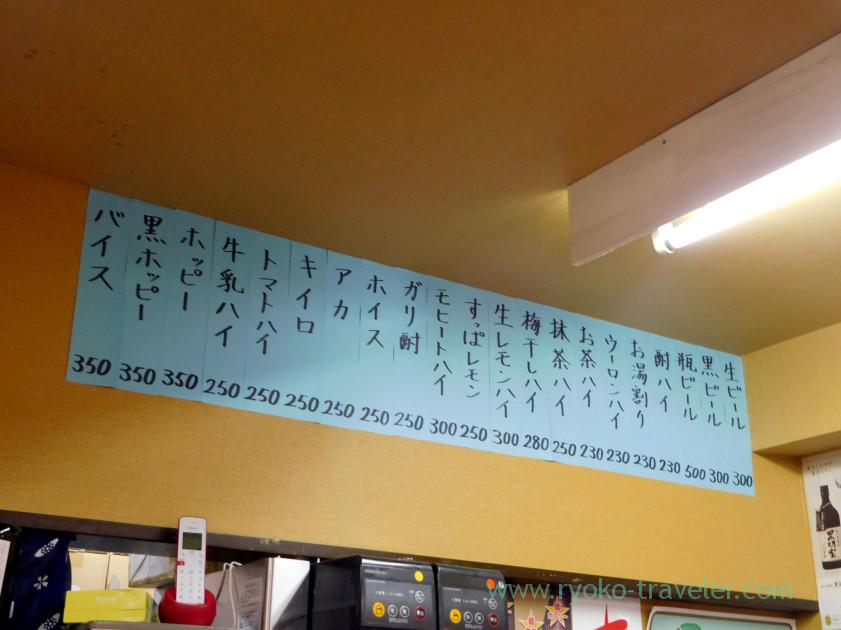 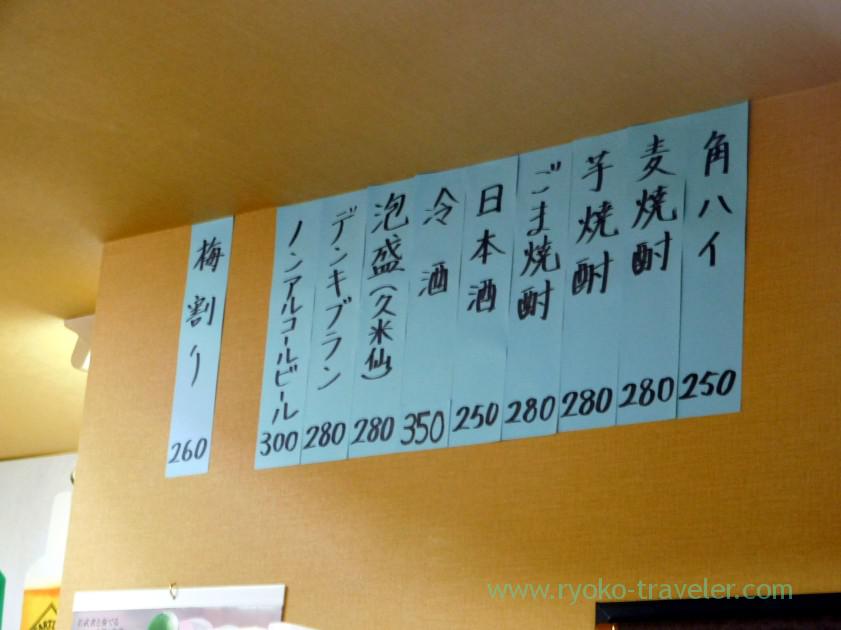 Another, there’s white board menu of the day. 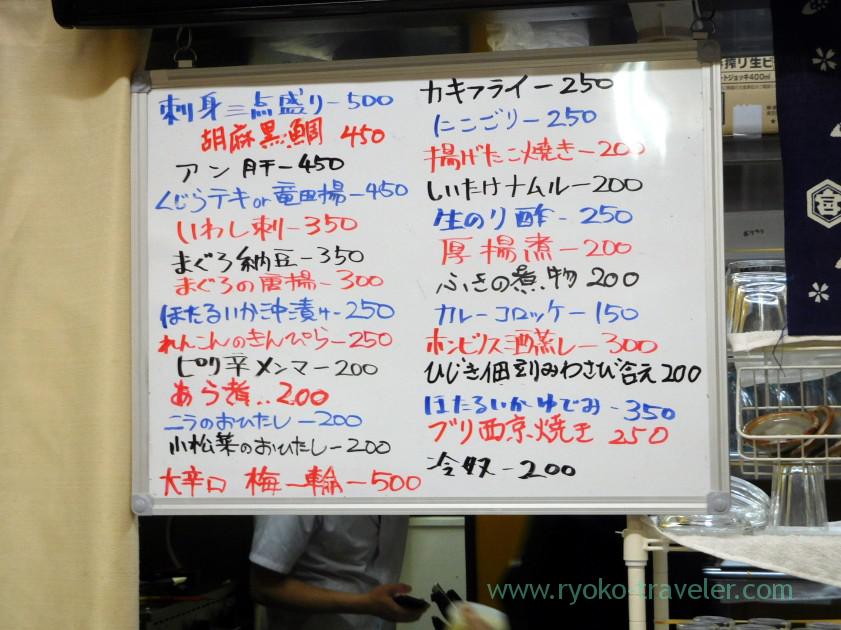 Because it is inexpensive stand-up-drinking shop, reservation is unavailable. And we don’t need to pay table charge.

There’s no chair. Also counter tables there. The interior is simple. Everything is tidy because it is still new. Many people visit there alone or with one friend.
Smoking is permitted. But there’re not many people smoking. I think many people want to eat and drink quickly. 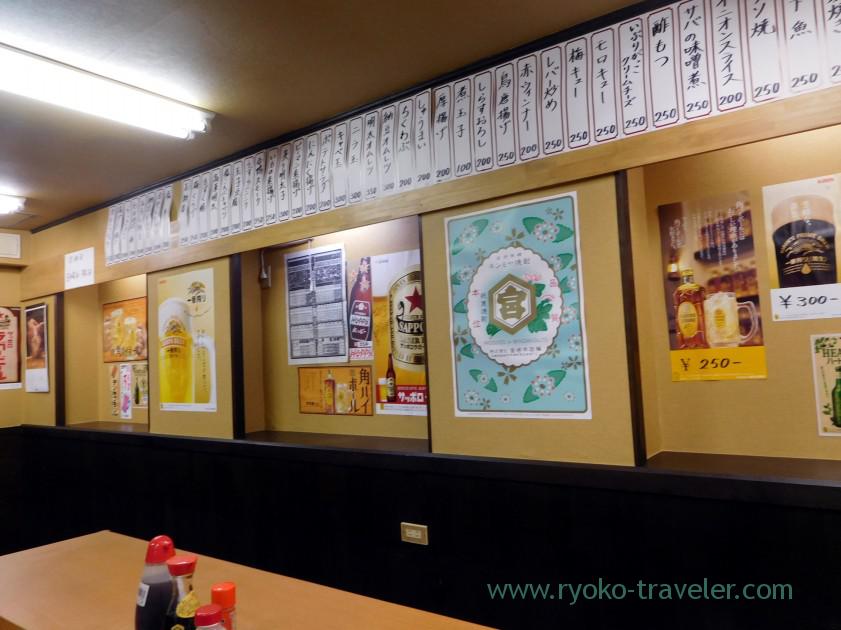 The most inexpensive drink. Chuhai (酎ハイ, 230 yen). Chuhai is Shochu and soda. Simple.So, it go with all foods. Not too strong. 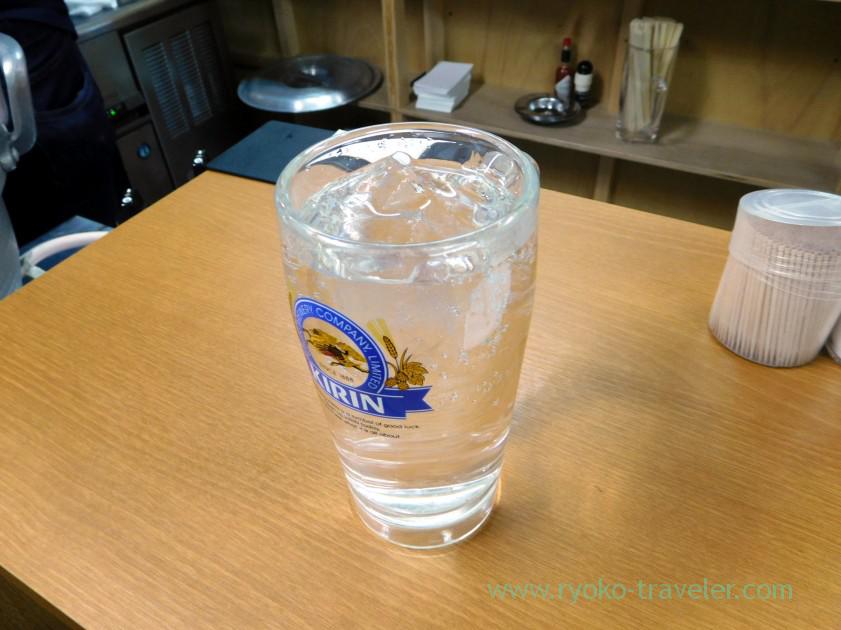 Suppa Lemon(すっぱレモン, 250 yen). “Suppa” means sour. Shochu and lemon extracts. Its name sounds so sour. But it’s not too sour. Don’t worry. Not too strong, too. Rather weak. Like juice :p 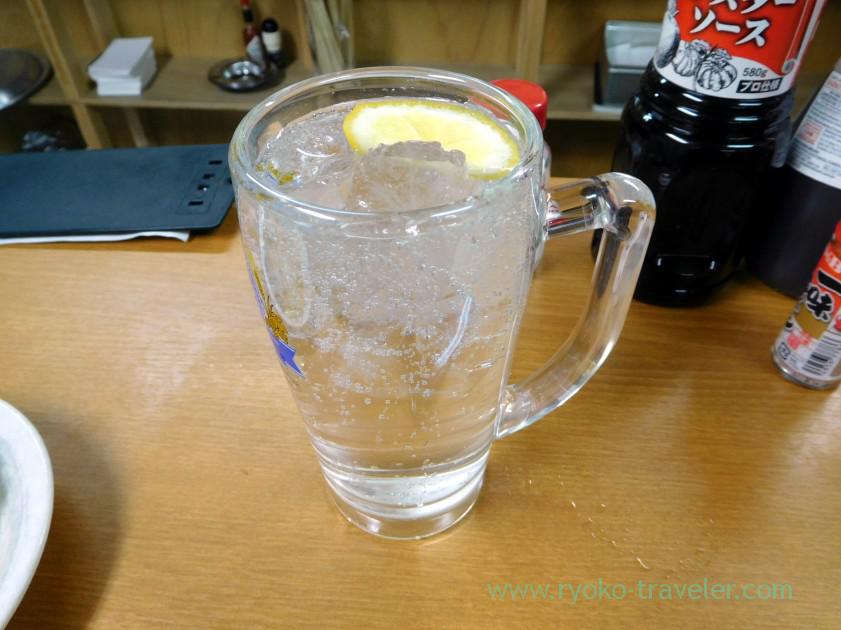 Kakuhai (角ハイ, 250 yen) is KAKU whiskey (角) produced by Suntry and soda. It’s stronger than expected. If you want to drink something strong alcoholic drinks at this shop, this Kakuhai is good. It went with grilled squid legs and deep fried foods well. 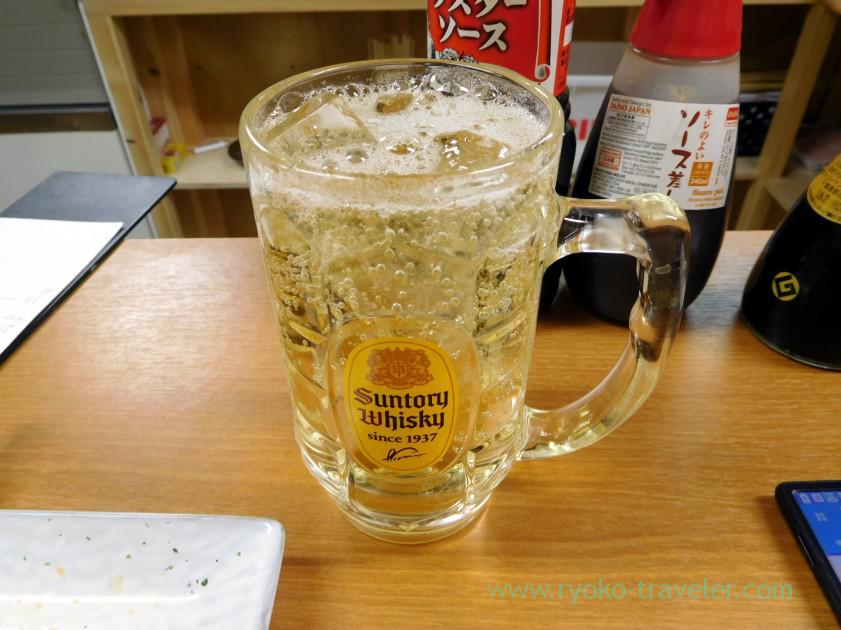 Matcha hai (抹茶ハイ, 250 yen) is, do you imagine ? Yes. Shochu and matcha juice 🙂
They have large bottled matcha juice in the refrigerator and mix it with shochu.
Contrary to its appearance, it’s not powdery and don’t have strong tastes of matcha.
Thanks to matcha juice, it’s easy to drink. Well, as well as suppa lemon, it’s like juice. I was brought to the place close to this large hotpot. Simmered tofu, simmered egg, Chikuwabu and so forth in it. So, I couldn’t avoid something.
So, I ordered Simmered tofu (肉豆腐, 200 yen). 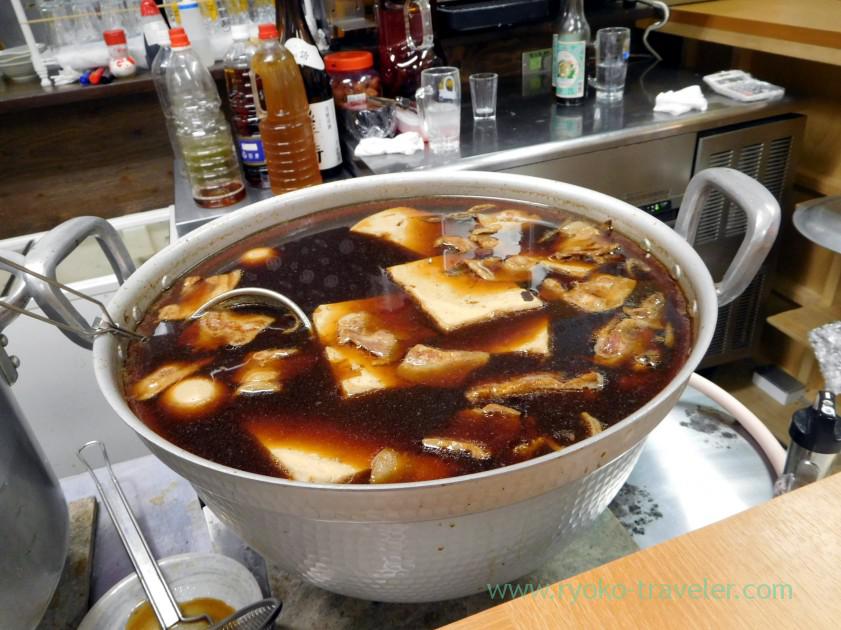 Unexpectedly large tofu was served. And small piece of pork meat was on it. Though the surface of the tofu was seasoned strongly, the inside was white. So, the degree of seasoning is best. 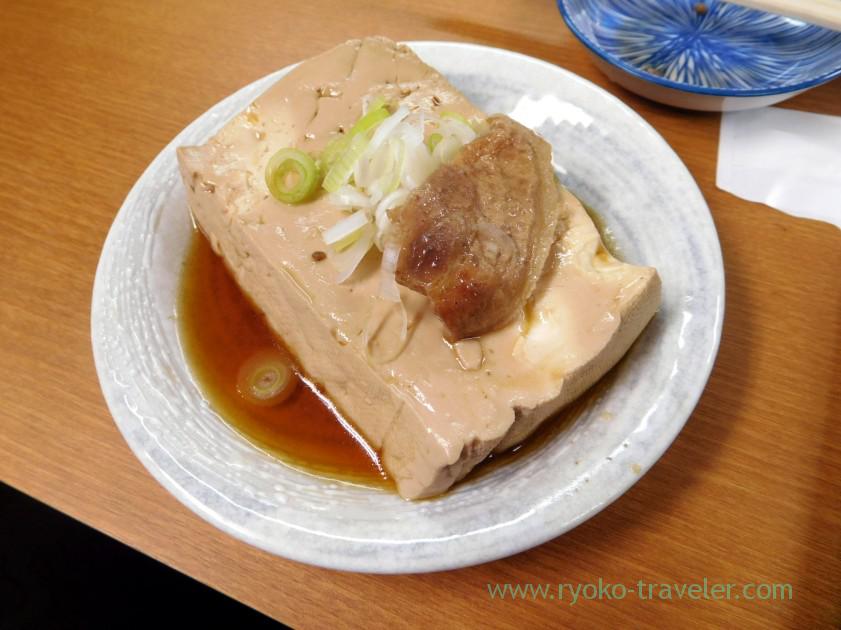 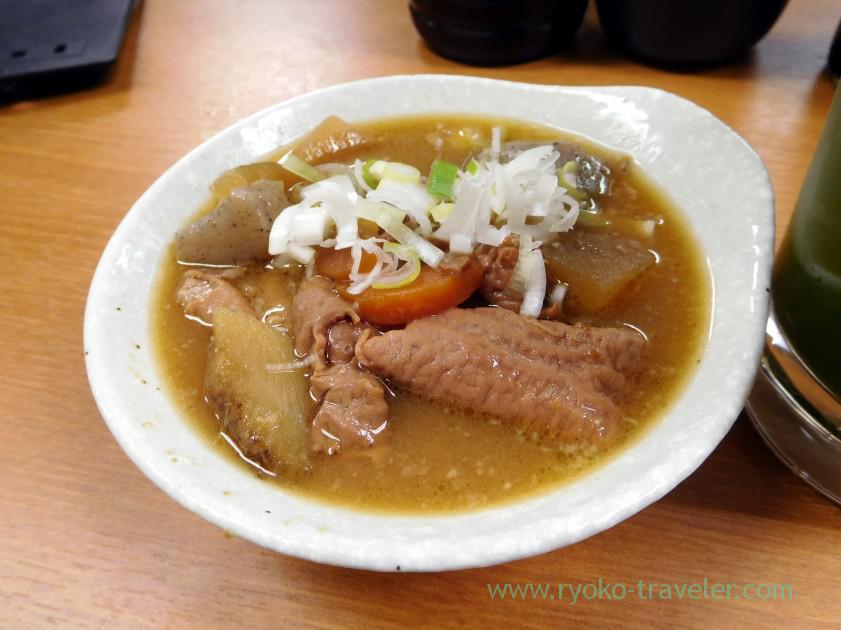 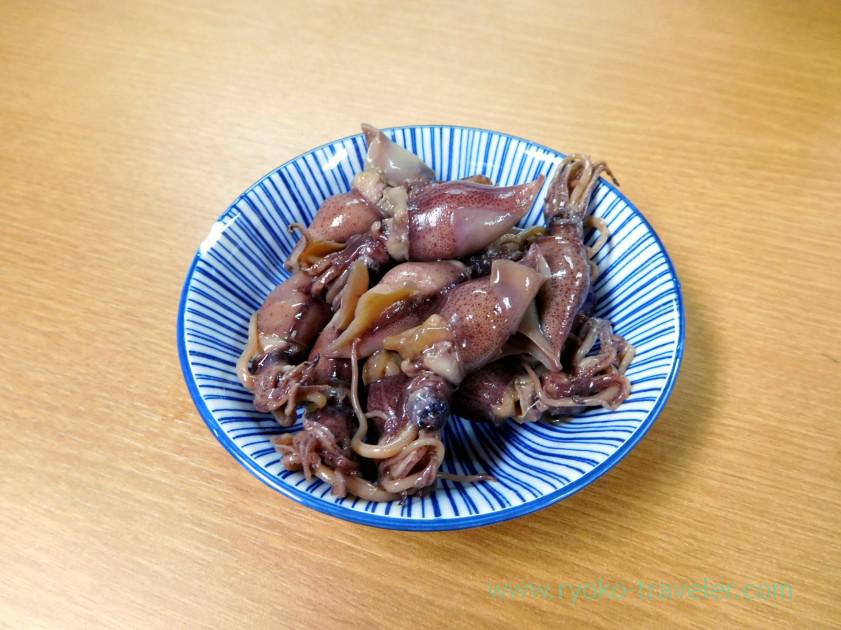 They have much species of deep fried foods. I chose Squid leg karaage (ゲソの唐揚げ, 250 yen) from them. It was crisp and good ! 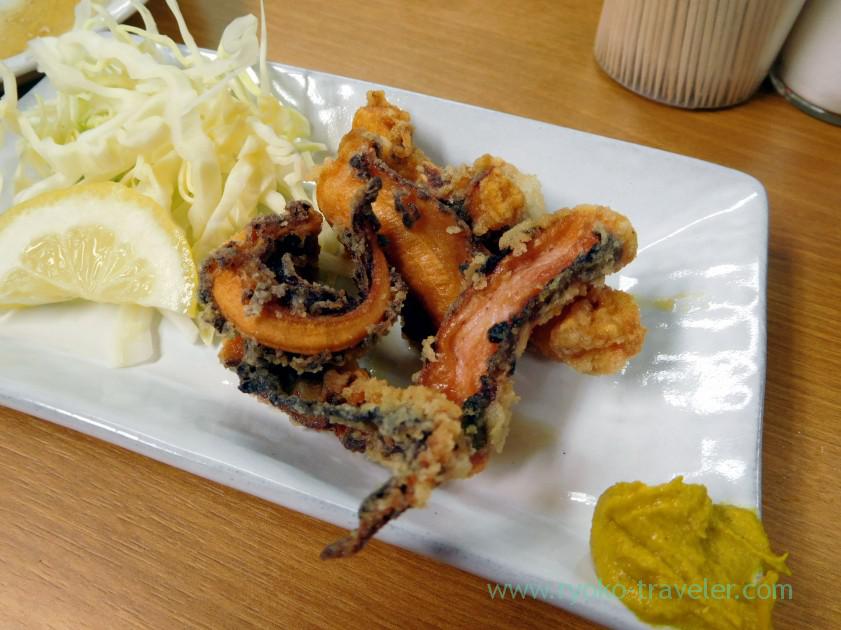 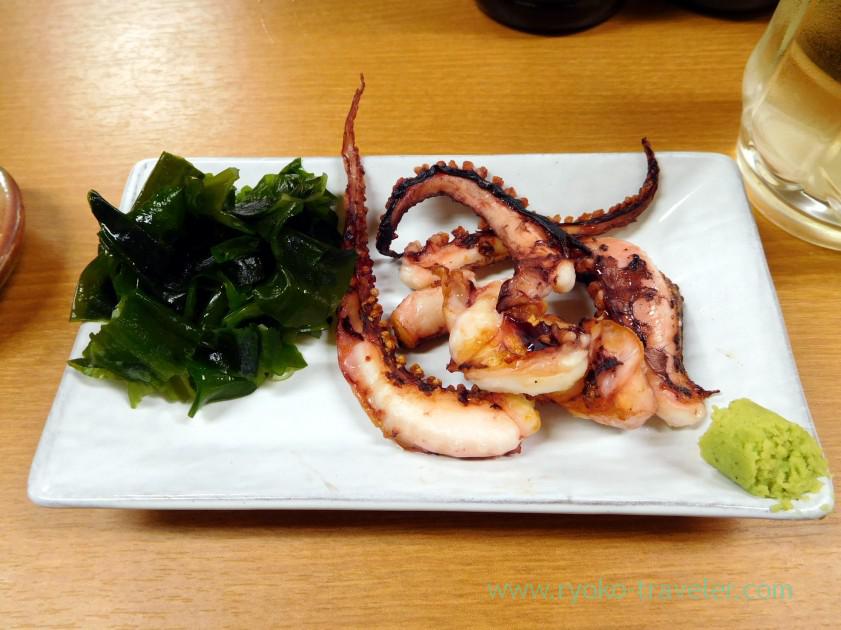 Last food. Mentai omelet (明太オムレツ, 350 yen). The most expensive food that I have eaten at this shop !
Mentai is mentaiko(marinated cod roe in spicy sauce). You can see small eggs of cod roe from the outside. 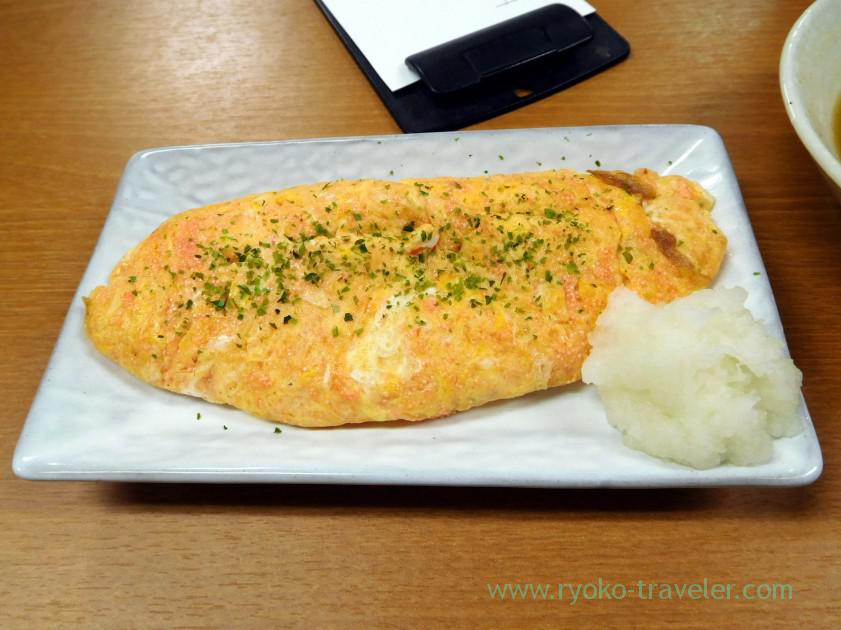 But there’s more mentaiko in it ! If you love mentaiko, this is must food !
And half-cooked egg was good, too ! Eating it without anything is of course, good. But eating it with grated daikon radish on the dish and with shichimi pepper is good, too. 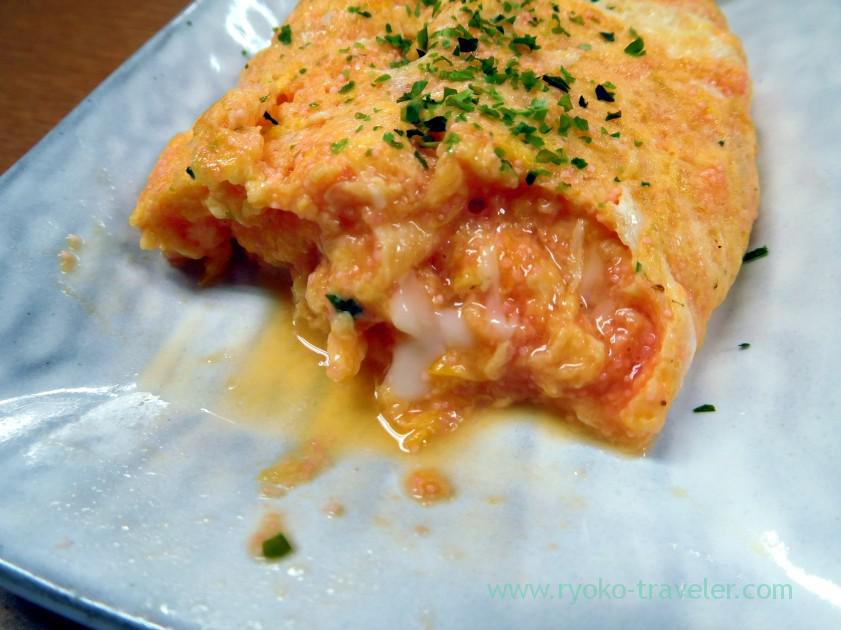 I like this mentai omelet very much. And also simmered tofu, grilled squid legs. I want to eat this three foods everytime I visit there !

I went to grilled meat restaurant for the first time in a while. With my mother. Although I say, the restaurant is clos...

Now is best season for sardines. Sardines caught in Chiba area have high reputation. And such a high-level sardine dis...

I told befoe, I ate soba that didn't have my taste. But the soba restaurant served my delight soba. That restaurant is...