We visited the ramen shop located in Nakatsu area of Osaka. I heard here’s always a long line before the opening time.
Actually, when we got to there one hour before the opening time on weekday, there were already some people waiting in front of the shop and when the shop was open, there were about 40 people waiting. Their name is Mugi to Mensuke.

They are located at the under of National highway Route 423. You pass through in front of Yashichi that is also popular ramen shop if you go to Mugi to Mensuke from Nakatsu station.

There’s a L-shaped long table having 13 seats in the shop.
It looks like fancy Japanese foods restaurant because of vermilion-colored tray and plain-wooden counter. Interval of each seats is wide, so I felt comfortable. I’m left hander 🙂 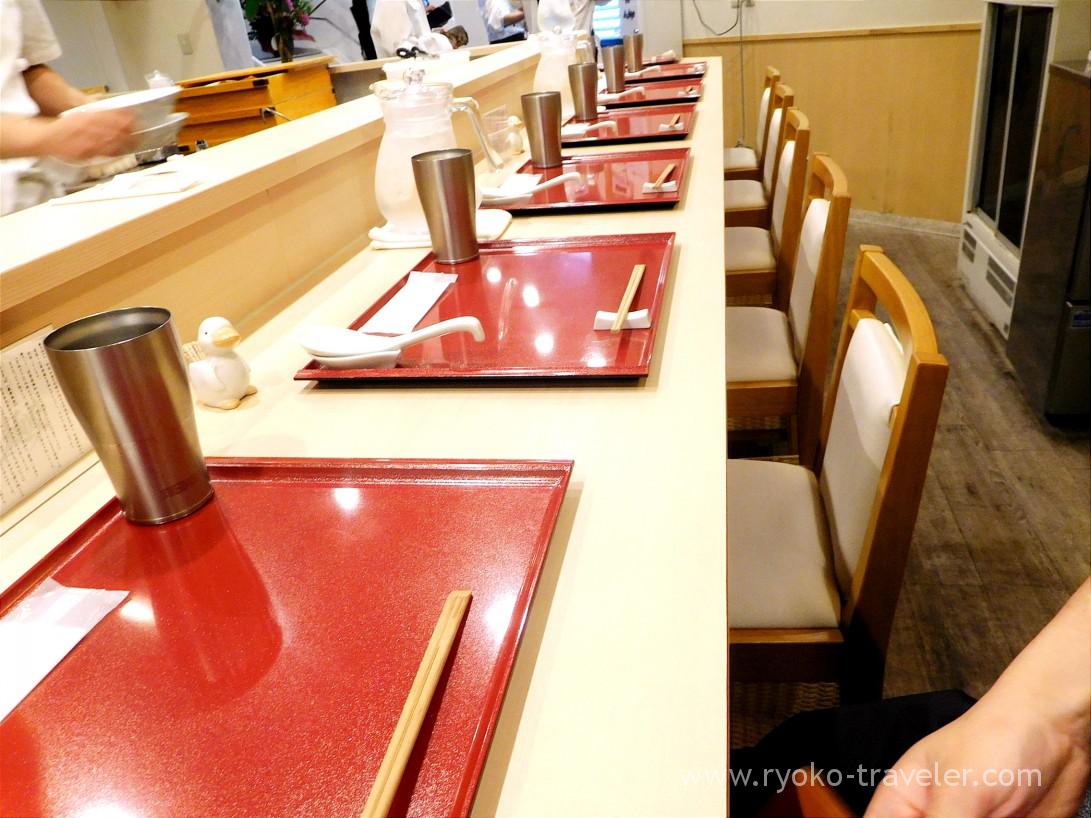 They have two types of ramen. Shoyu ramen having Kyo-Jidori chicken broth (京地どりのまろやか醤油) and Iriko ramen (イリコそば). Iriko means sardine. And they serve duck ramen on Saturdays dinner time only.

Shoyu ramen based on Kyo-jidori chicken

Kyo-jidori chicken based shoyu ramen with ajitama (旨み厳選-京地どりのまろやか醤油 味玉中華そば, 950 yen) have roast pork with medium rare, menma, meat balls and boiled egg. Beautiful. Noodles are made of flour from Hokkaido. I felt the flavor of flour. Its soup have soup stock of Kyo-jidori chicken and Nagoya cochin. Much fats of chicken was floating on the surface of the soup, but it wasn’t greasy at all. It had sweetness of chicken’s fat and sharp tastes of soy sauce.

The roast pork was so soft. I wanted more 10 slices of it :p

There was yuzu (a kind of citrus) on it. Its flaver added refreshing tastes. Menma was soft. And half-boiled egg was delicious.

Shoyu ramen based on Ibuki iriko

This is Iriko ramen (銀付き伊吹いりこのすっきり醤油 イリコそば, 850 yen). Its transparent soup have soup stock of Ibuki Iriko. Iriko means dried sardine. And Ibuki iriko is one kind of precious iriko. You think it’s shio ramen ? No. It have soy sauce. So, it’s shoyu ramen, too. The flavor of iriko was mild and good. It have three slices of roast pork and meat ball. 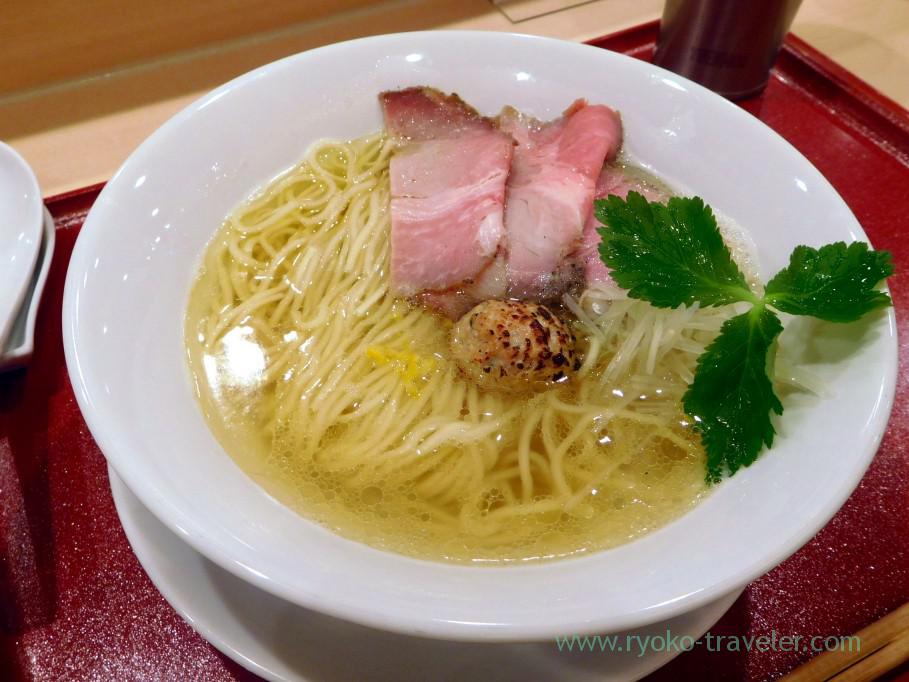 If you have enough space to eat rice, grilled roast pork bowl (炙りチャーシュー丼, 350 yen) is good choice. The amount of rice is not large. So, I would be able to eat ramen and rice up if I visit there with empty stomach. 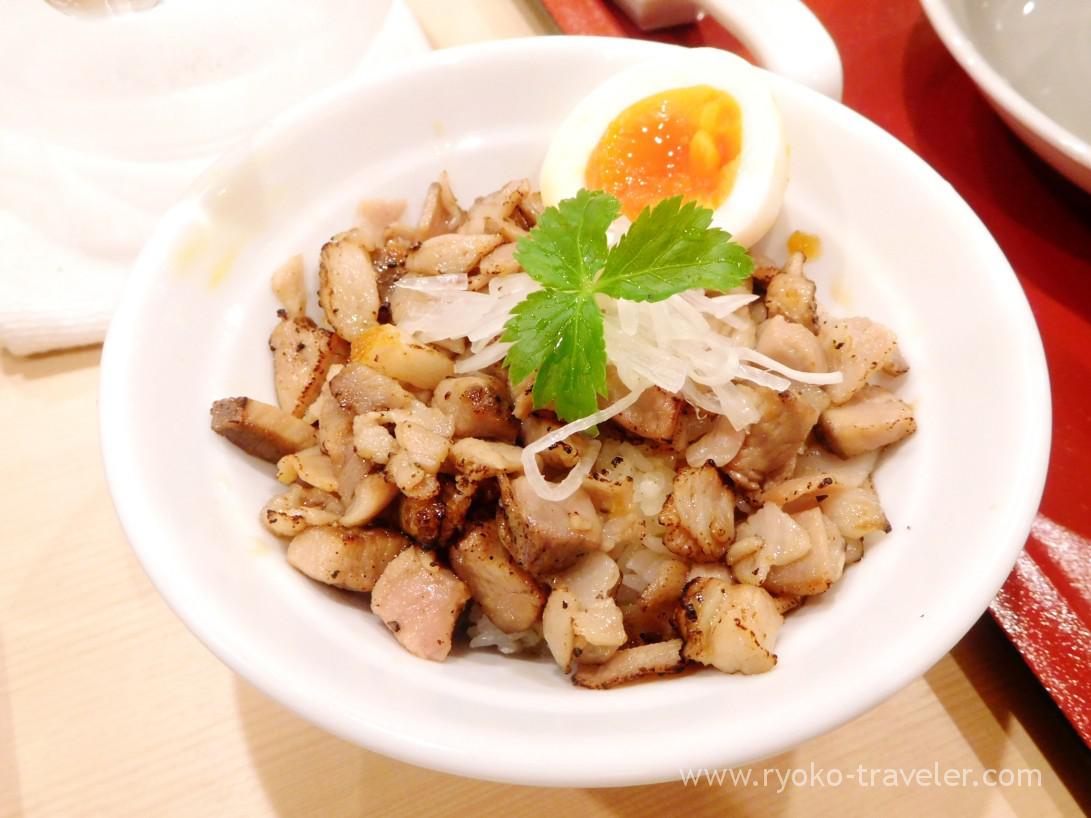 When we goto out of the shop, there were still about 30 people waiting. It’s really popular restaurant. You’d be better there with parasol and drinks in hot season.