After we got out of Ryu-zushi, we had dessert at Mosuke Dango next to Ryu-zushi.
Mosuke Dango put their dango and wagashi (Japanese confectionery) outside for sell, so I always stop in front of the shop. Their dango attract many people and they buy something 🙂

Also they have eating space inside and we can eat anmitsu, zenzai and so on.
Mosuke Dango is born in 1898. Their dango is said to be the origin of “Dango 3 Kyodai”. (their dango is 4 kyodai(brothers) though…) 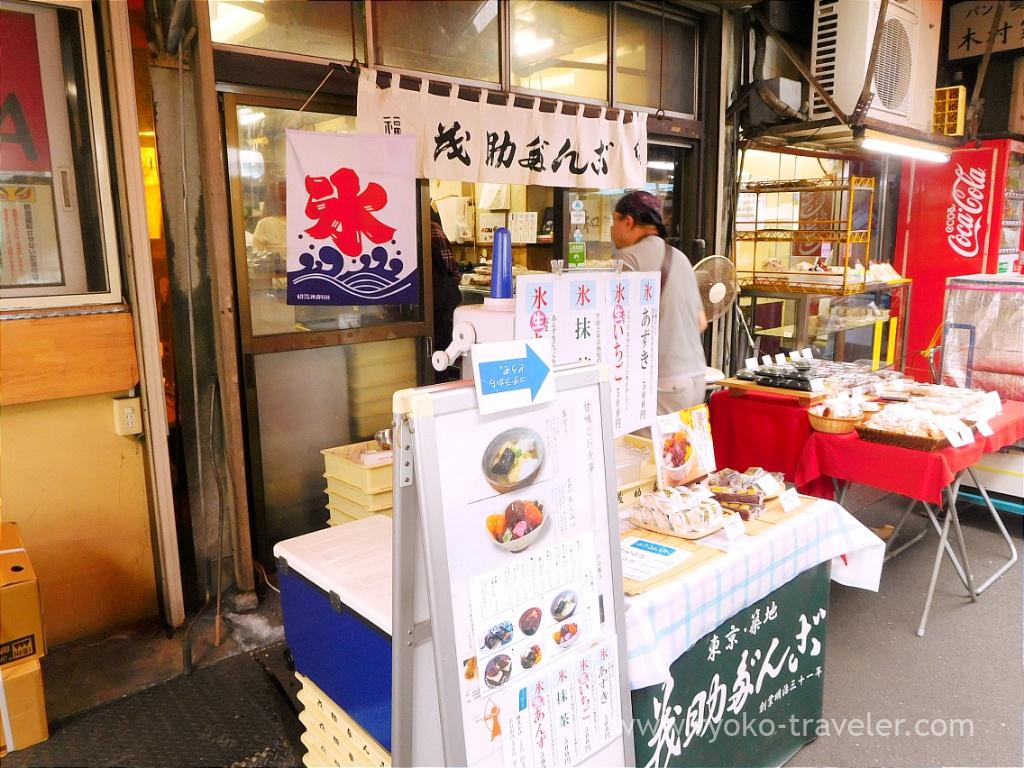 (Moved) Tsukiji Market : Kiku course at Ryu-zushi (龍寿司)
Still there're some shops that I haven't visited yet in Tsukiji Market. Ryu-zushi is one of the shop and finally I vis...

Mosuke Dango is located in the Building No.1. They are sandwiched with Ryu-zushi and Kimuraya.

There are only three tables having four chairs each.
So many plastic and paper boxes are piled up. 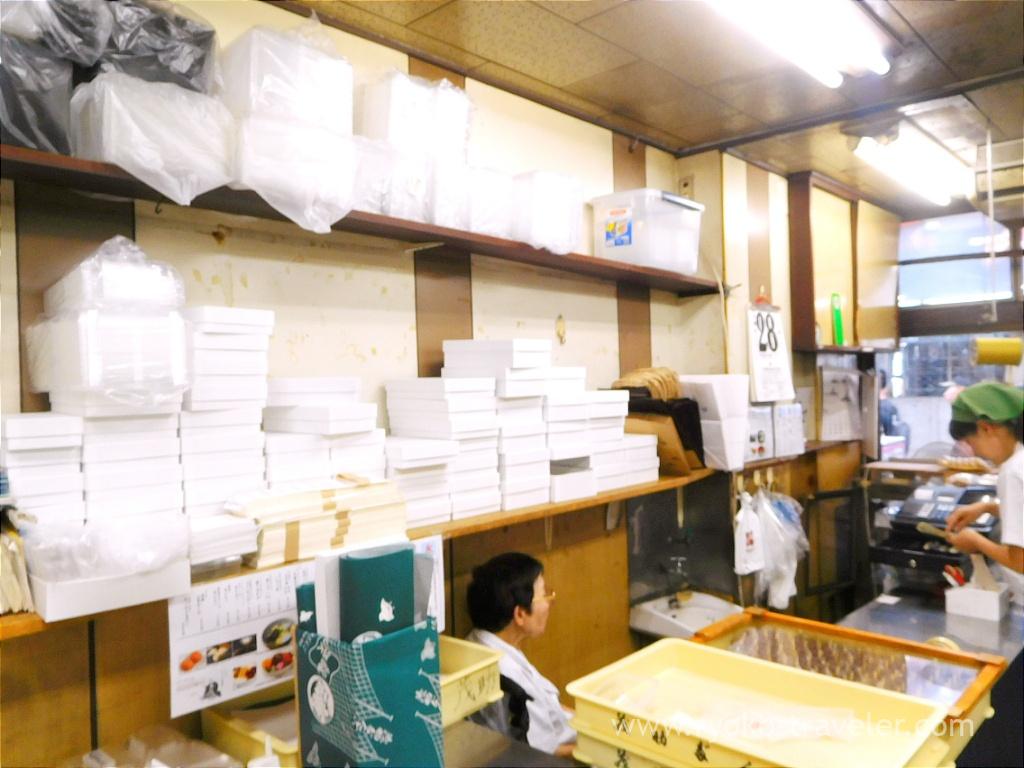 Though it’s long-established shop, the interior is clean and tidy. 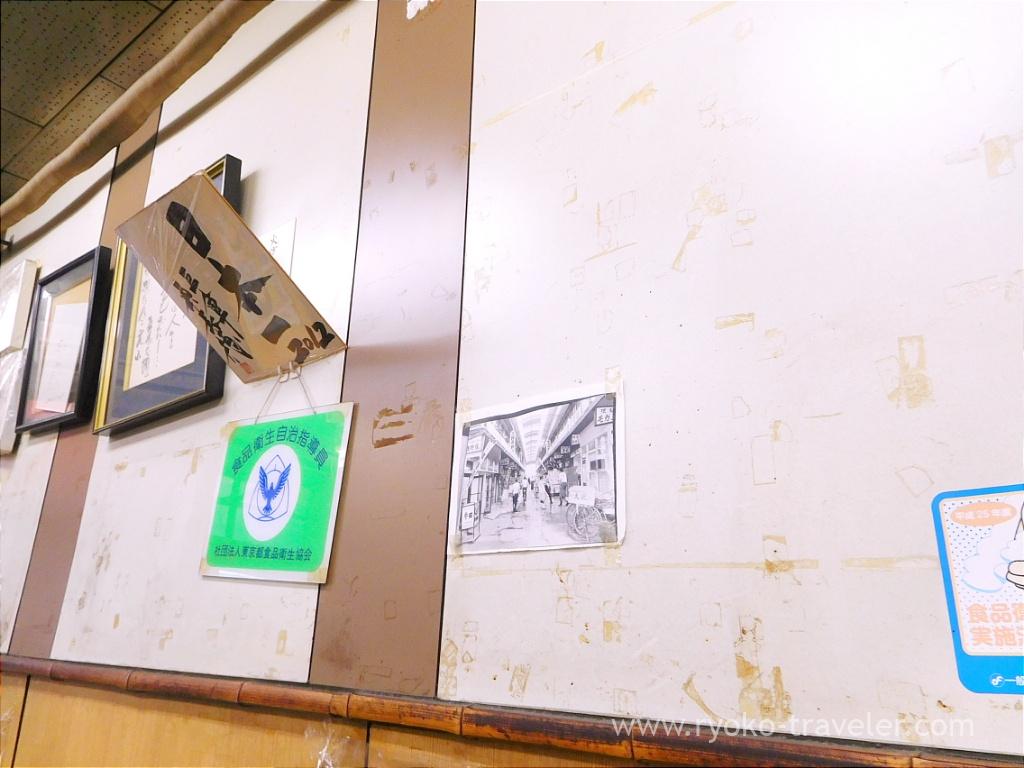 This is the menu “for here”. Tax included. You can order at the table and pay before get out of the shop. There’s no English menus, but the menu have photos that are popular foods. 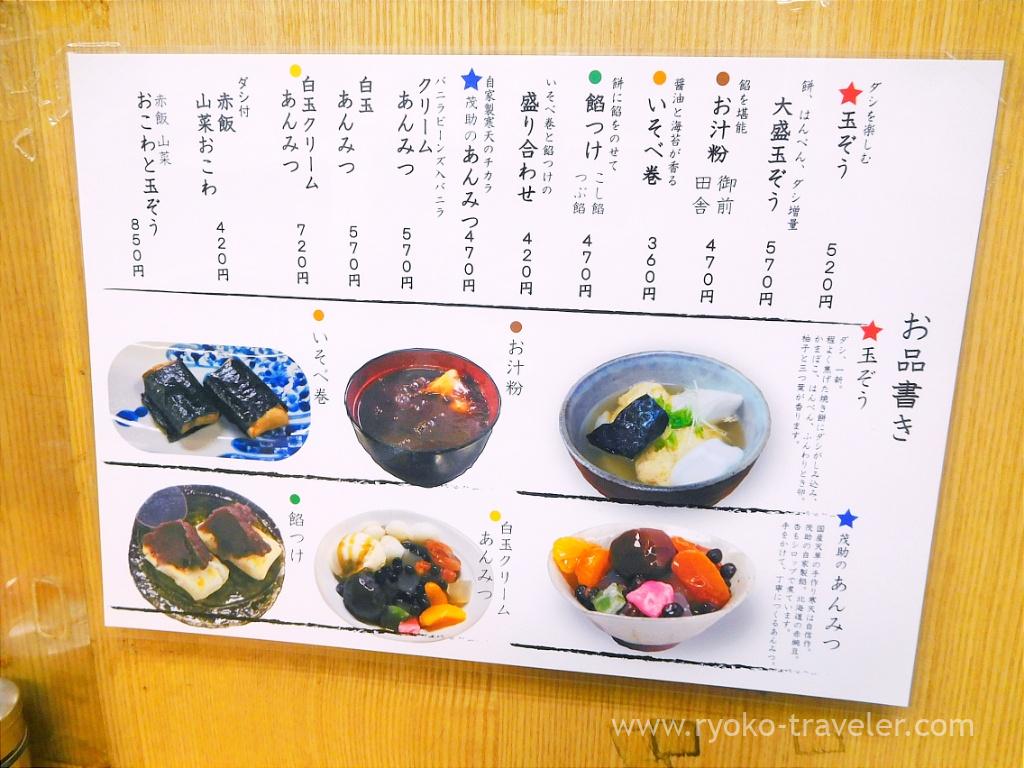 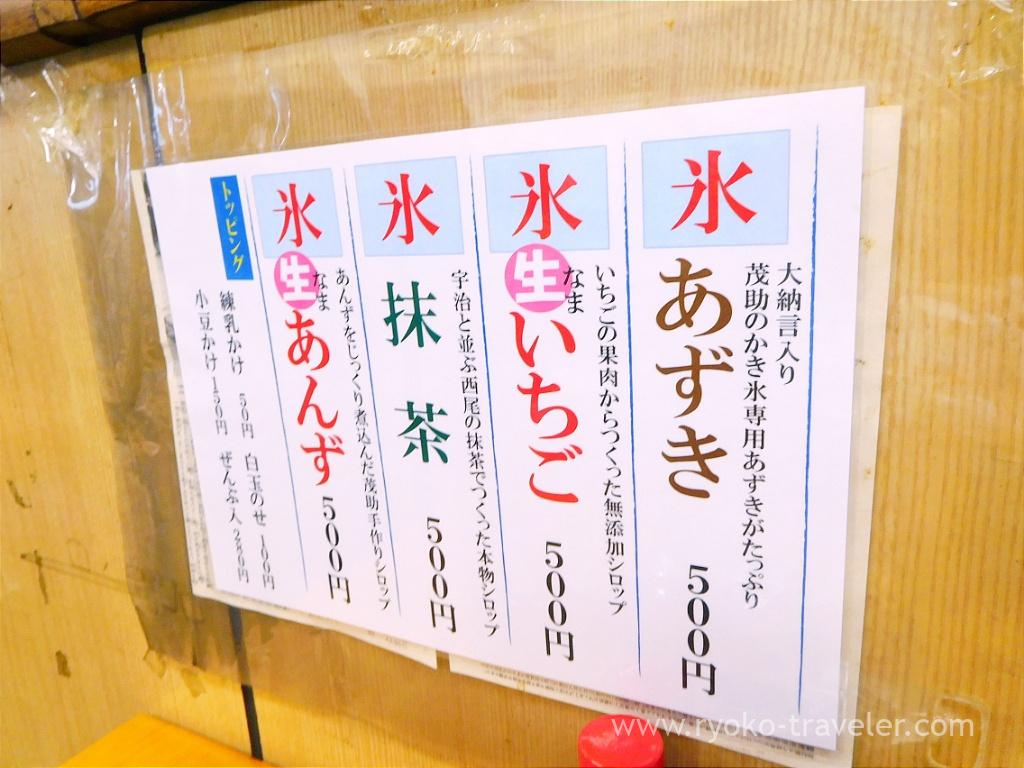 I ordered cream anmitsu (クリームあんみつ / 570 yen).
After we ordered, the man make our anmitsu at the back of the room.
So cute ! It isn’t too large, so it’s good for dessert after hearty meal at Tsukiji. 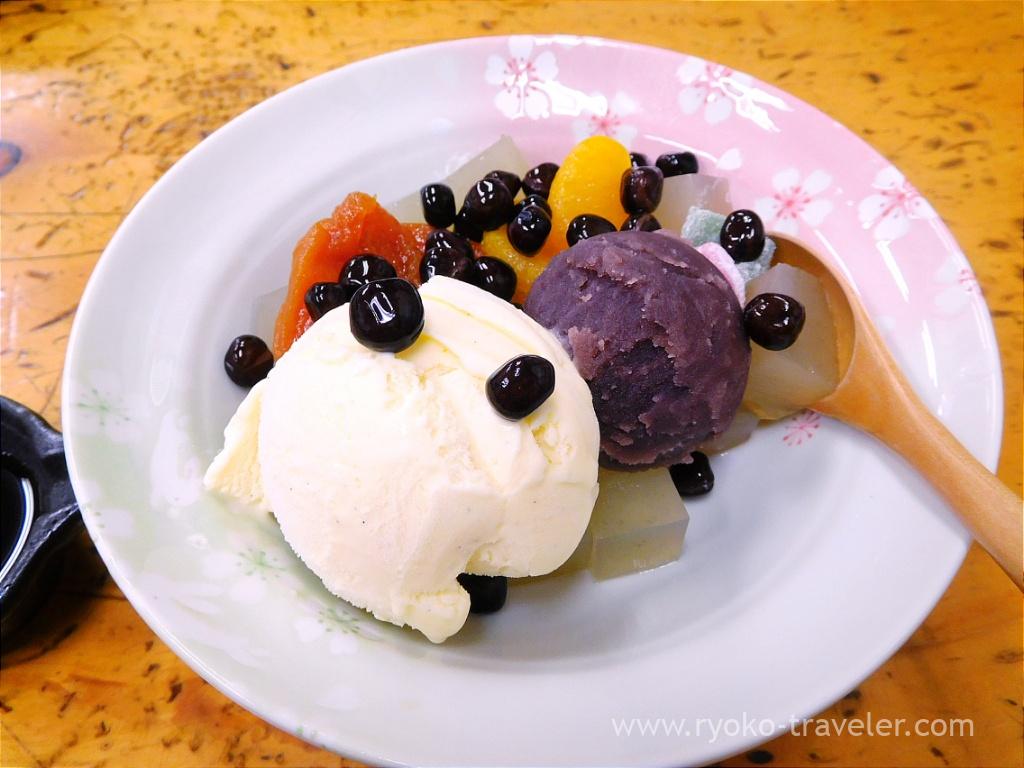 Brown sugar syrup is served separately. So, we put onto our anmitsu.
Their homemade Agar-agar have springy texture. Awesome.
And another, it have mikan (kind of citrus), apricot, gyuhi, smashed anko (tsubu-an) and vanila ice cream.
Their anko isn’t too sweet but tasty. Mixed tastes of vanilla ice cream, anko and brown sugar syrup is great. 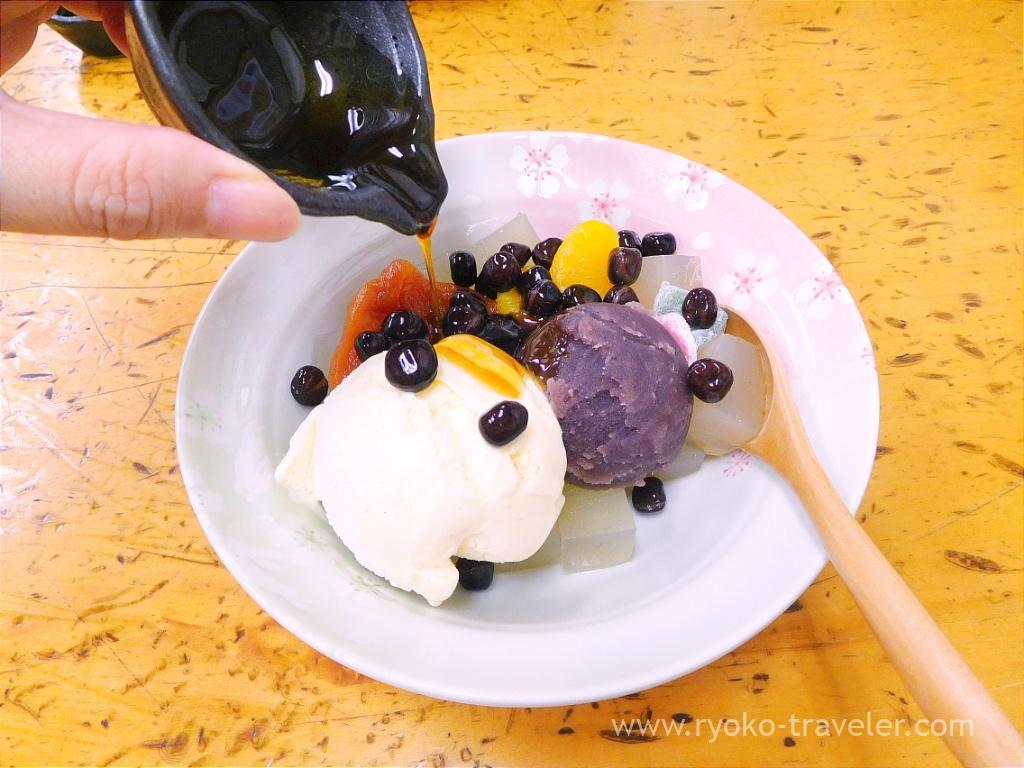 If you need shiratama, they have Shiratama cream anmitsu (白玉クリームあんみつ / 720  yen).

Though there’re some branches of Mosuke Dango, this Tsukiji market branch is only the branch that have eating space. Only there !

Popular ramen shop named Inoue along Monzeki street quit their business because of fire, but there's another ramen sho...

I headed to the roasting place that I posted about it yesterday. Arise Coffee Roasters Blue Bottle Coffee...

This would be the last visit to Yonehana this year. It was before Christmas. Though I intended to go to another shop, ...

Charcoal grilling can't be eaten after moving ! I got up early for having breakfast at Odayasu, but I found "Today's ch...

I heard there's a ramen shop who serve ramen in collagen-rich soup with shark's fin. I found they are located on the 4t...
(Moved) Tsukiji Market : Kiku course at Ryu-zushi (龍寿司)
Chii ran (芝蘭) in Toyosu