Still there’re some shops that I haven’t visited yet in Tsukiji Market.
Ryu-zushi is one of the shop and finally I visited there this time.
one of the shop that I had wanted to visit for a long time. 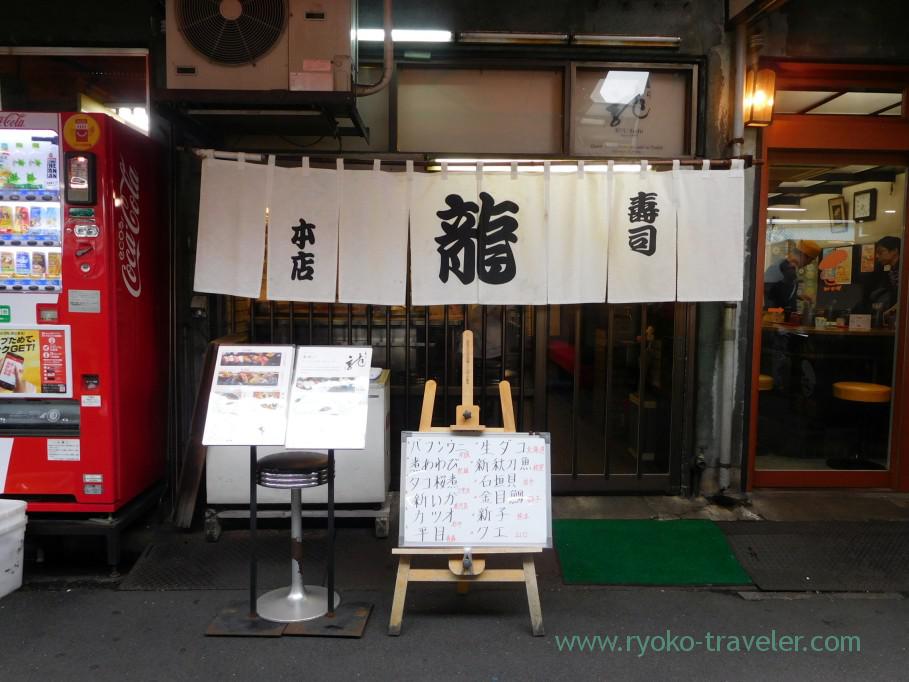 It is located in building No.1 in Tsukiji Market.
Building No.1 have three sushi shops. Iwasa zushi, this Ryu-zushi and Sushidokoro Sei. 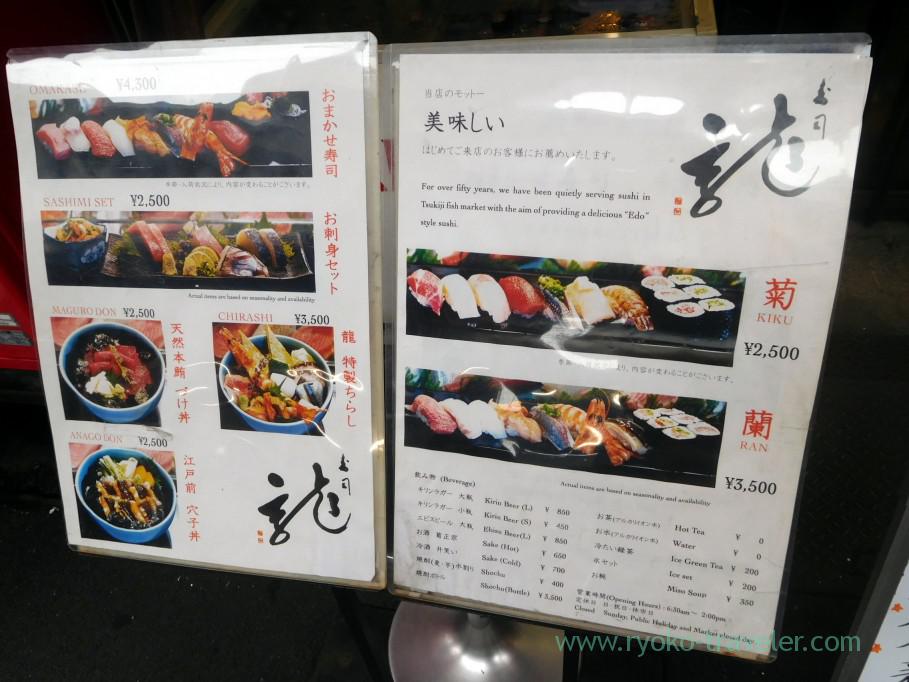 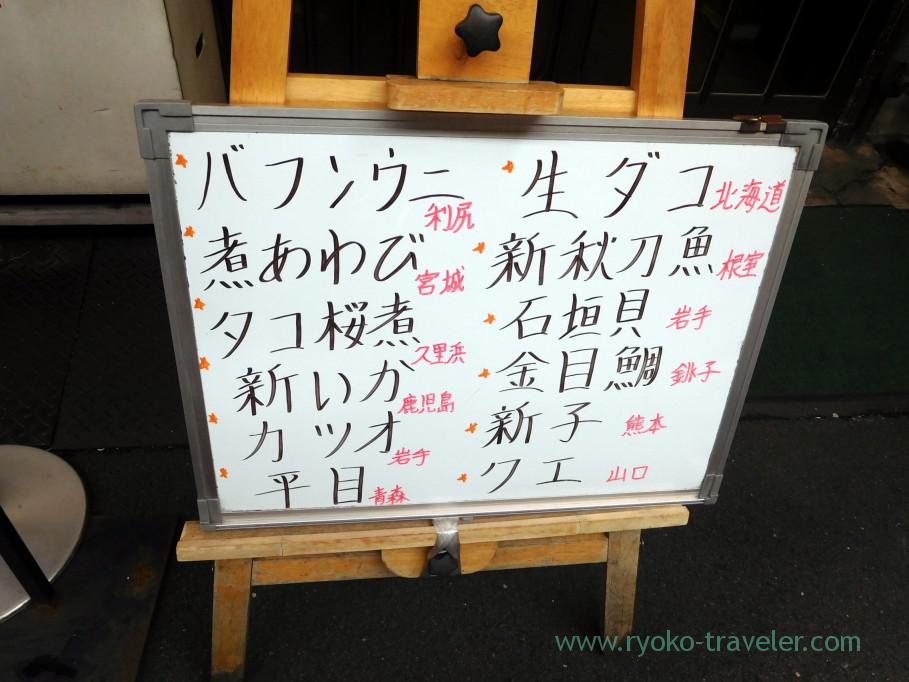 There are counter seats only in the shop. The interior is really simple. calm.

I visited there for the first time, so I ordered the most inexpensive sushi set. Kiku set (菊 / 2,500 yen).
It have 7 sushi and sushi roll.

If you order sushi only, they don’t serve chopsticks.
Most of their sushi isn’t seasoned. So, if you need, there’s soy sauce on the table. So, you can use it. We used it, too. But the vinegared rice is flavory, so I think it’s good to eat without soy sauce.
They say “Without soy sauce” when they serve sushi that is seasoned.

First sushi was tuna. The vinegared rice was rather light and soft. Those rice fell to pieces in my mouth. That’s good texture. 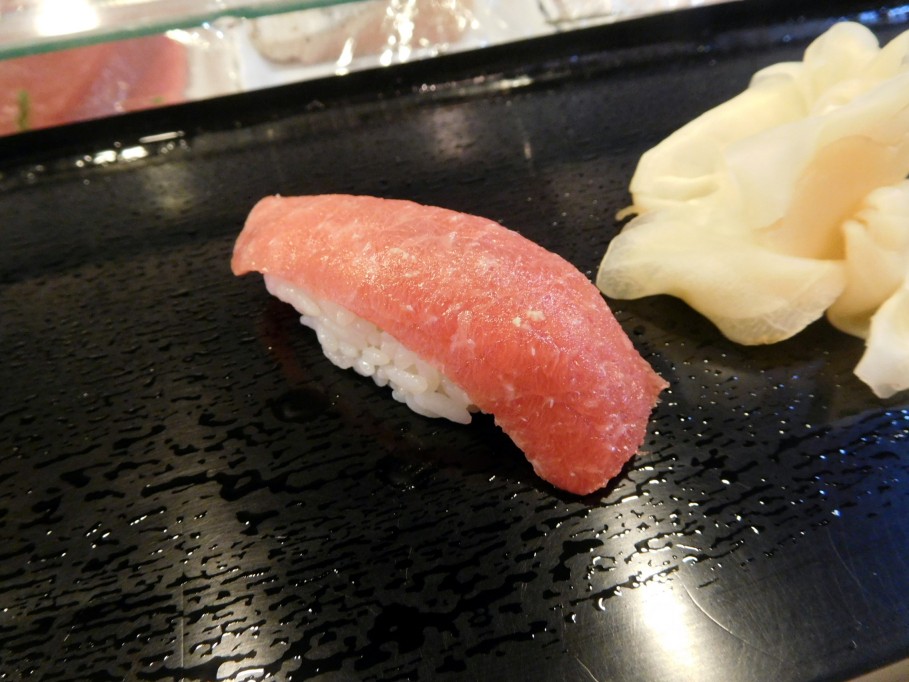 Squid. It had sticky texture. 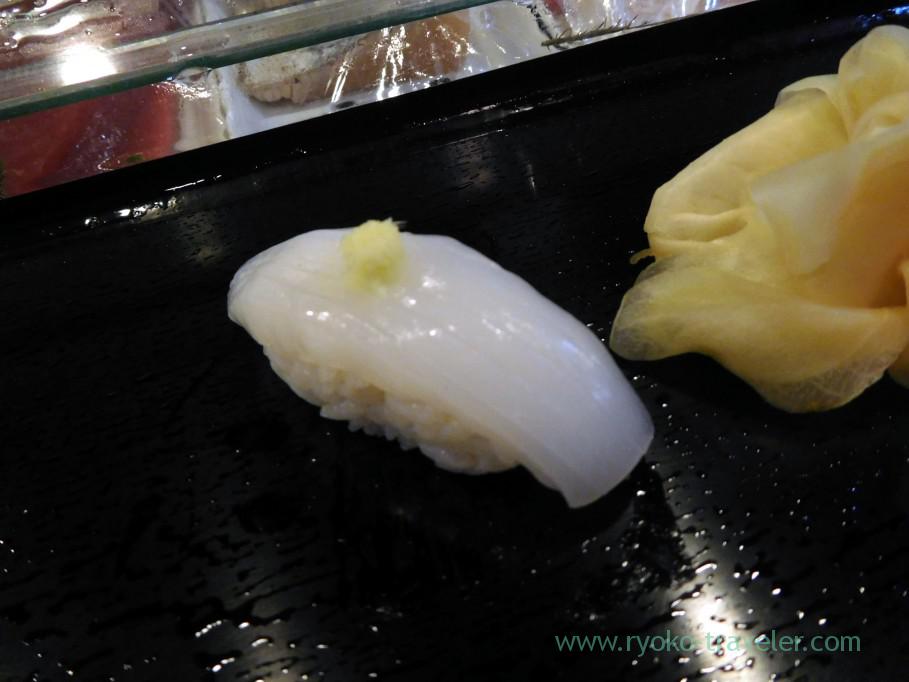 Red sea bream. It was marinated with konbu seaweed. So, we ate it without soy sauce. 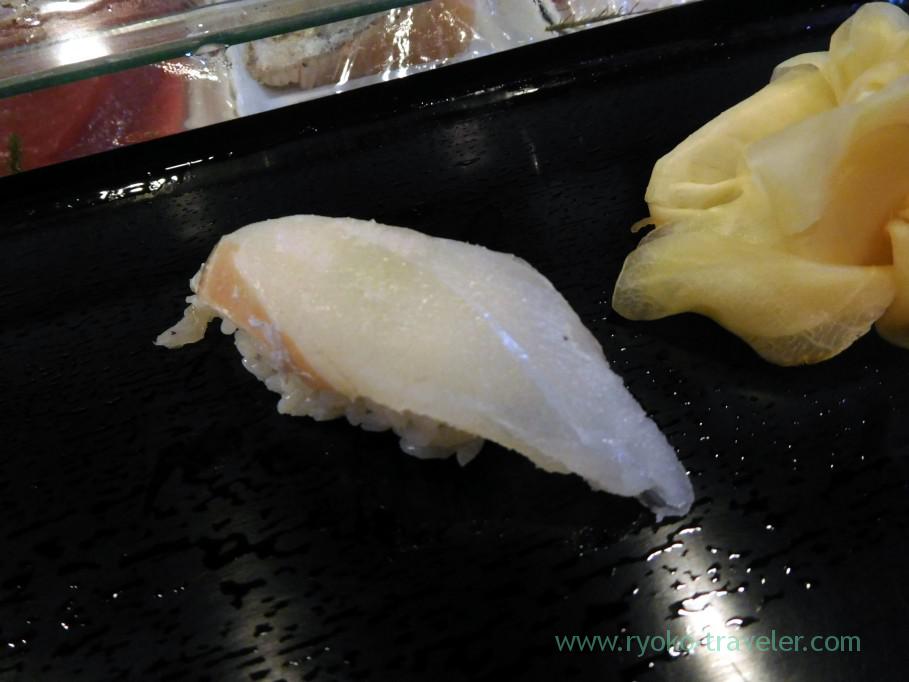 Mackerel. It was marinated with vinegar lightly. 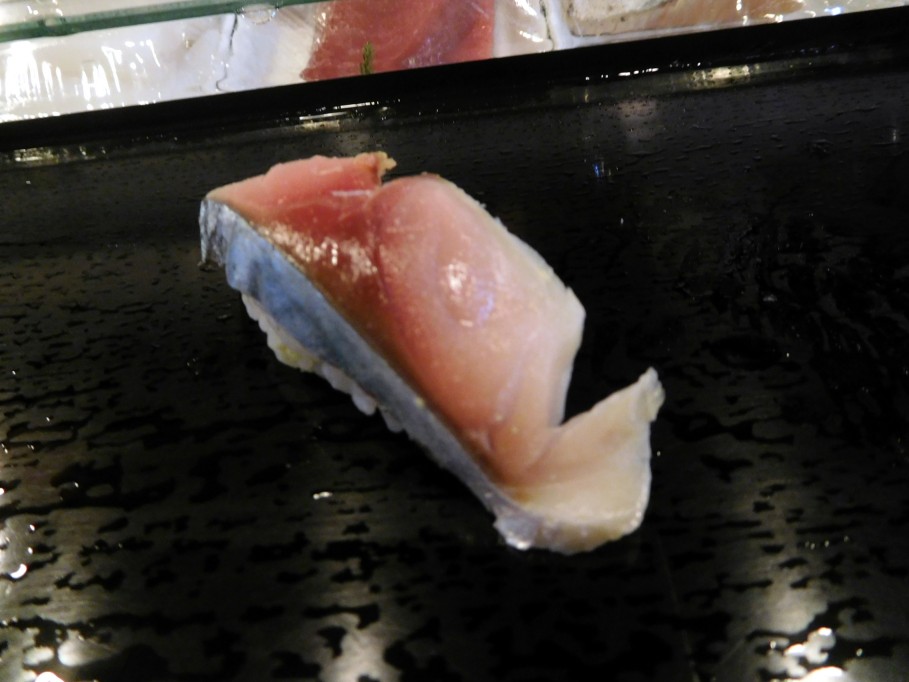 Spanish mackerel and scallop. I like the sweetness of the scallop. 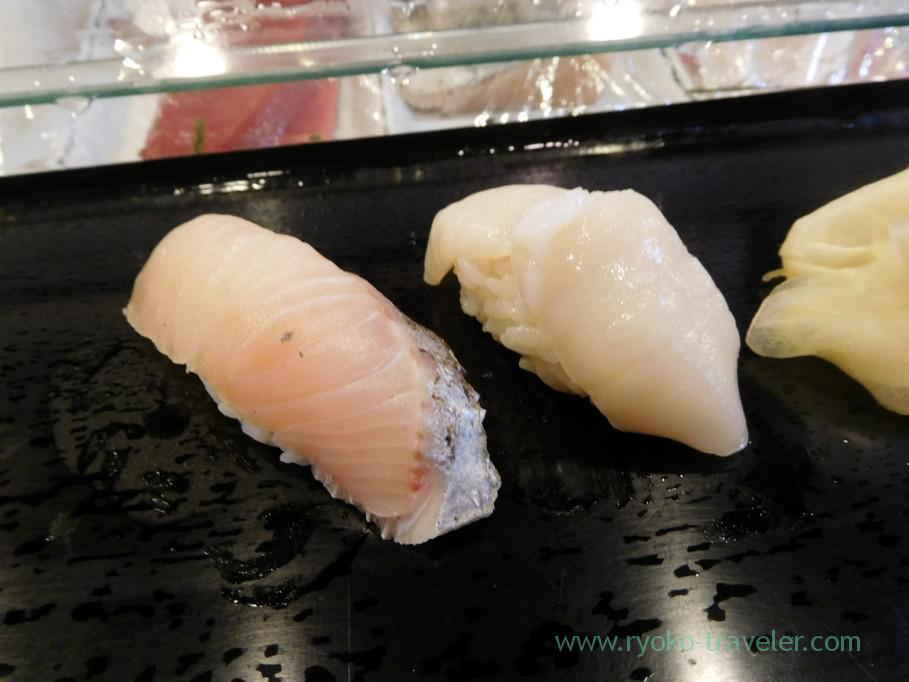 Squilla. It was thick and good. 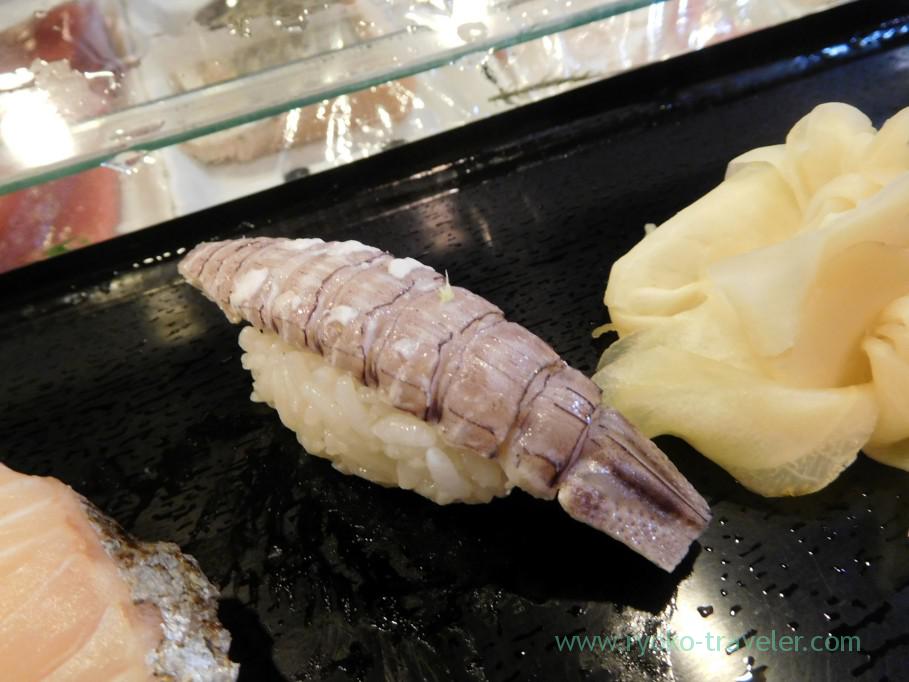 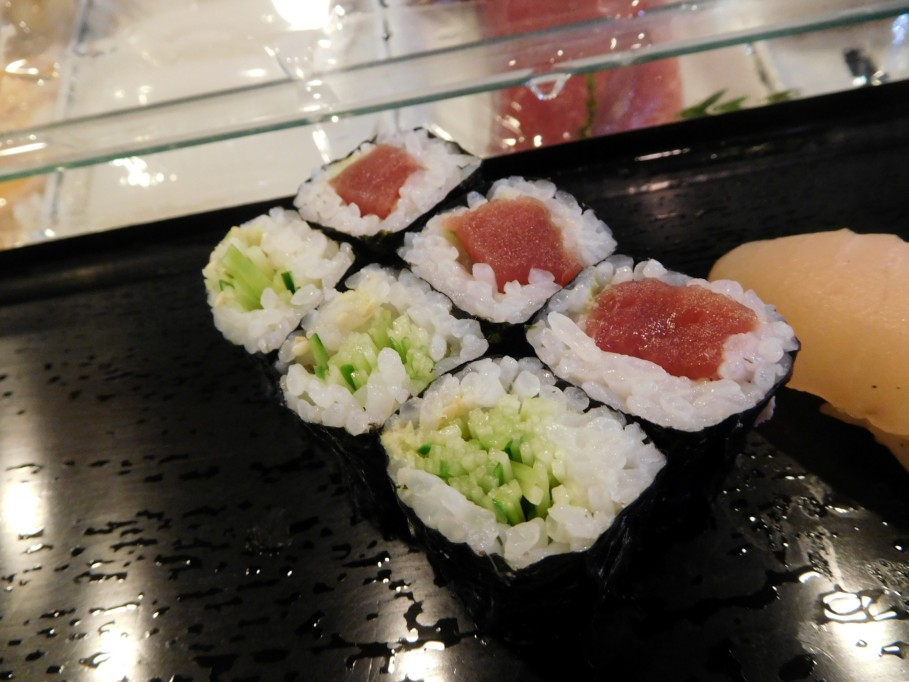 They serve each one rather quickly. I think later, it’s not necessary to eat quickly. But I eat quickly after they serve sushi :p

No.1 sushi that time was red sea bream.
Kiku set is rather inexpensive and you can eat it with easily like snacks. Not too much.
If you want to eat at some shops in Tsukiji, it’s good amount;)

Finally, I visited Ginza Hachigou (Ginza Hachigo) that I had wanted to visit for a long time.They were open in December...

Udon in Spring. You might feel strange about the title of this post :p I went to Gotanda to eat special curry that ...

One of the few restaurant serving Goto-style udon in Tokyo. I heard that there's a shop that is a specialty shop of "Go...

When I have lunch in Yotsuya-Sanchome area on weekdays (Mostly at Sushi Sho), I mostly go to Taiyaki Wakaba for dessert ...