Kato is reopen by another management office.

Last week I visited “Kato Shokudou” that is open from Feb. 16th.
“Kato Shokudou” is located where “Washoku Kato” that quit their business at the end of 2016.
Now it is managed by “Kaisendon O-edo (海鮮丼 大江戸)”

“Kato Shokudou”
Nothing has been changed about its looking. The shop curtain and the signboard. 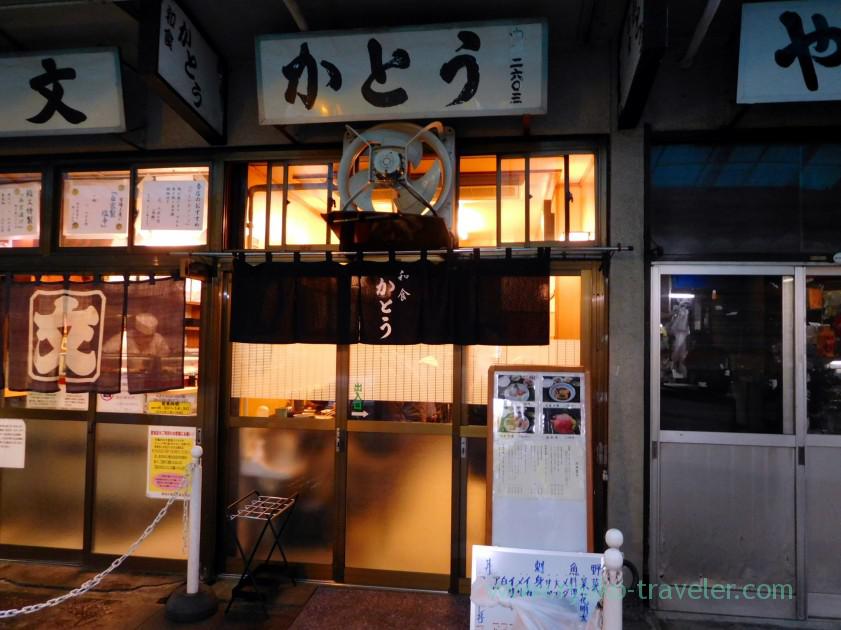 The menu has been changed a bit. But Kato’s specialty is on the menu as former. Sashimi, boiled fish, grilled fish and sashimi bowl ! 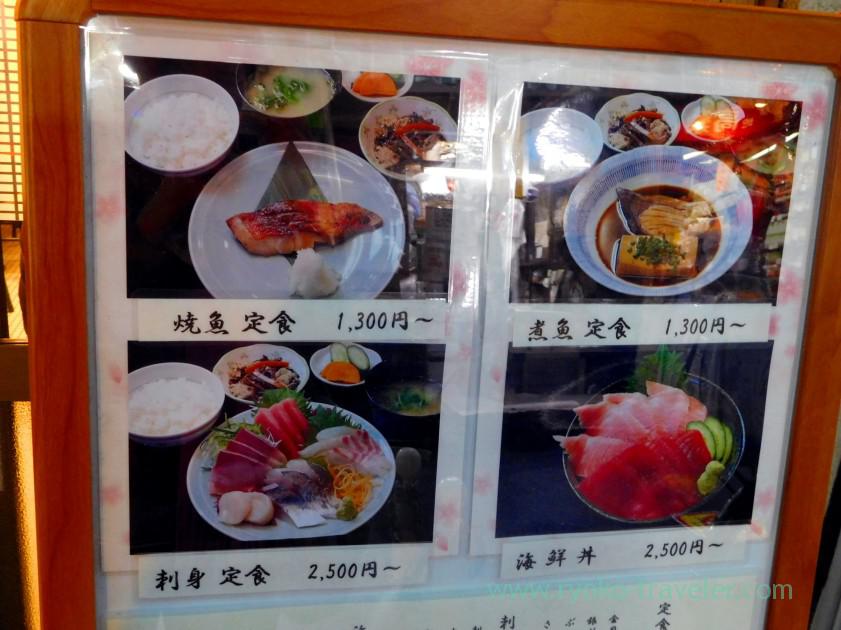 Prices are higher than former.

Another, there’s special menu of the day. (maybe rice and miso soup excluded) 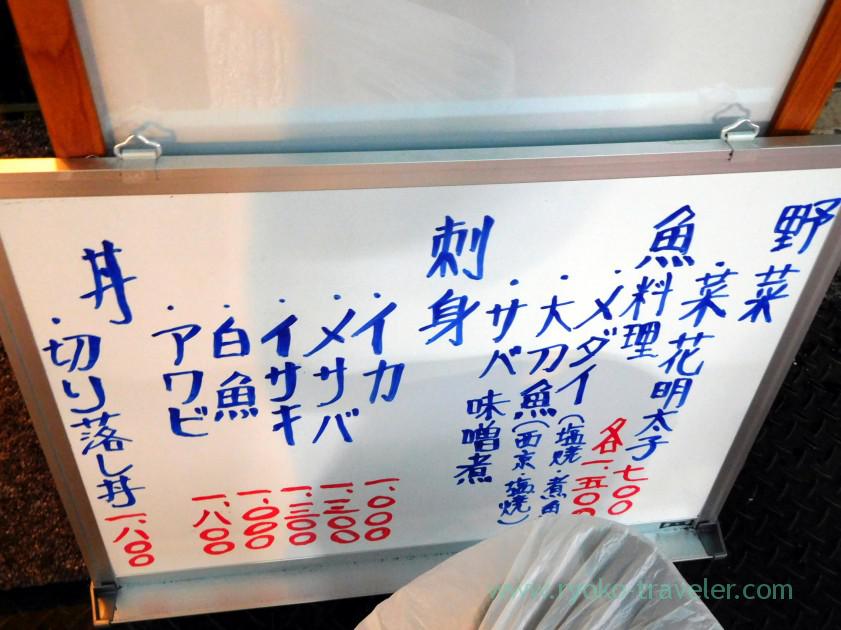 There’s a menu on each vacant seats. 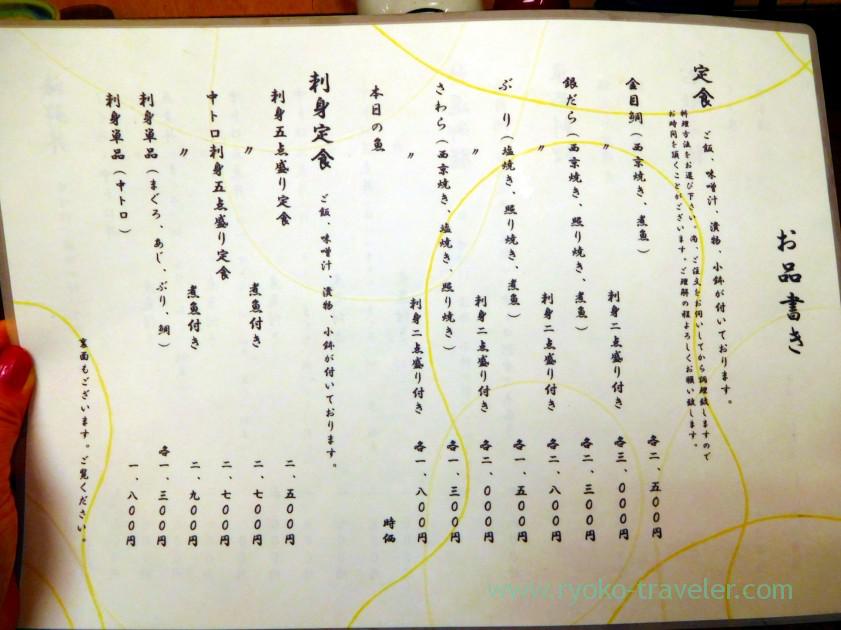 Plates hanging on the wall were removed. 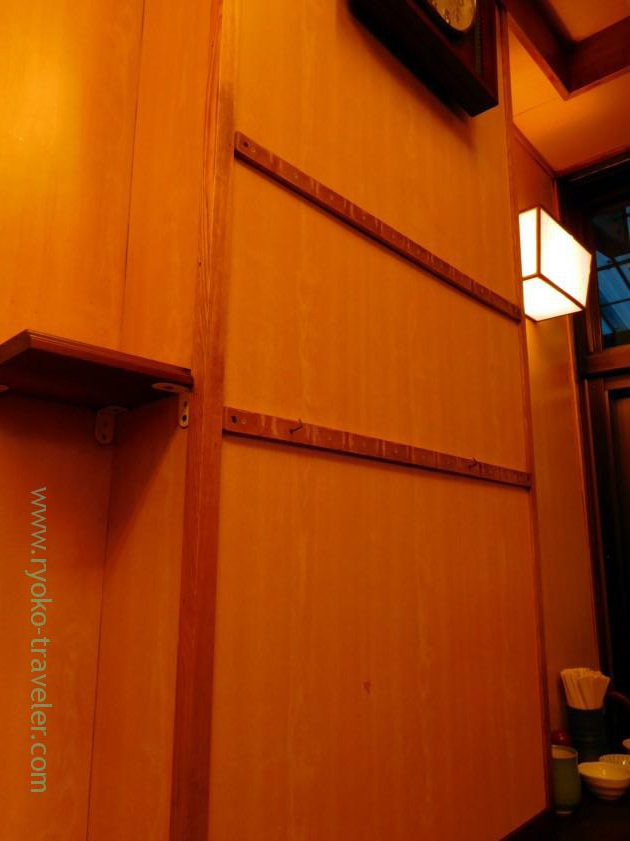 Instead of that, there’re paper manus on the wall, 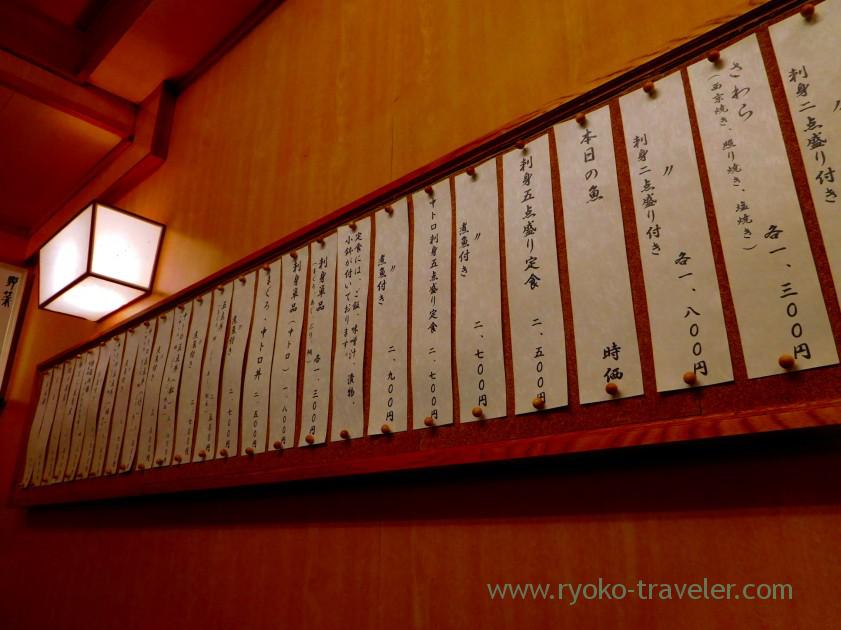 Of course, there’s menu of the day in the shop, too. 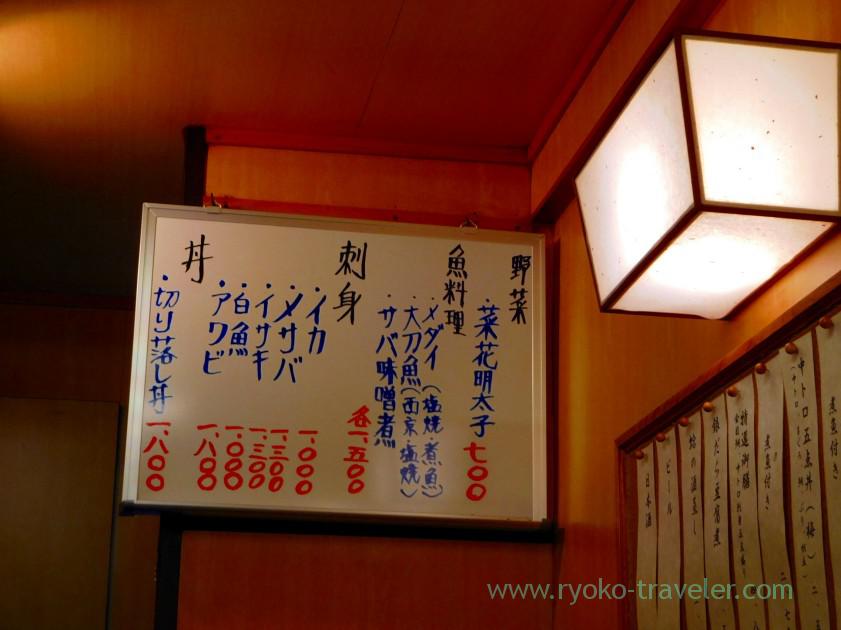 I ordered Spanish mackerel Saikyo-yaki set and assorted sashimi having two species of seafood (鰆の西京焼き定食、刺身２点盛りつき, 1800 yen).
Because this was the first time to visit there, I chose inexpensive one.
(I don’t like “Kaisendon O-edo”, so I needed courage :p)

At first, two dishes were served. Pickled vegetables and simmered burdock and carrots in soy sauce. 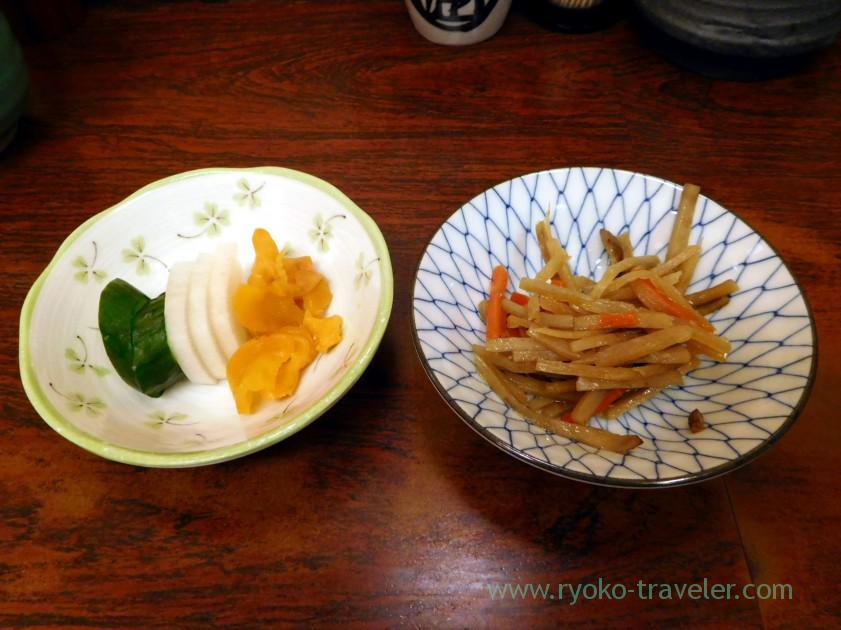 And then sashimi was served. The menu says it have two species of seafood, but as you see, it had three species ! Squid, scallop and yellowtail !
I didn’t know its reason. Because just after they are open ? or it was in the early morning of weekday ? or just leftover ? Anyway, I was happy 🙂 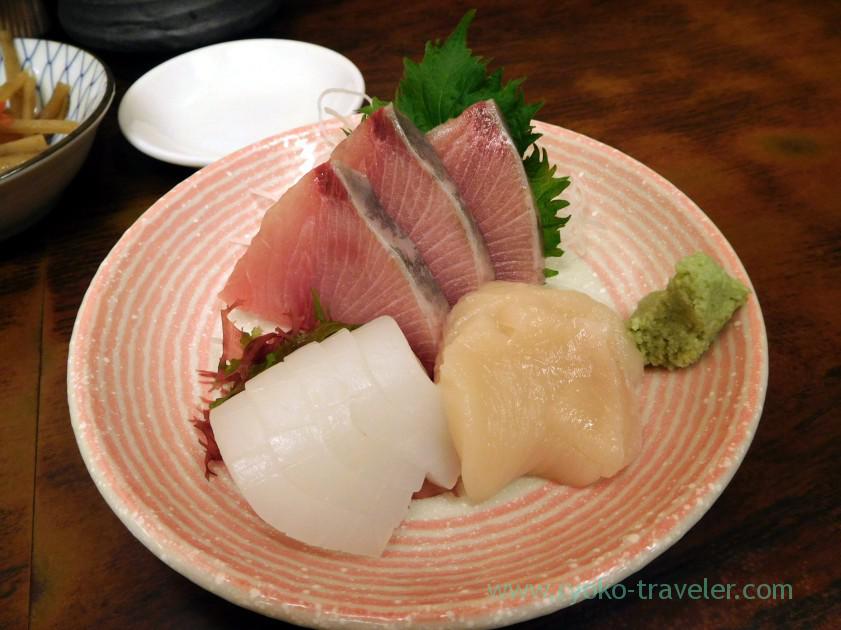 Everything was fresh and tasty. 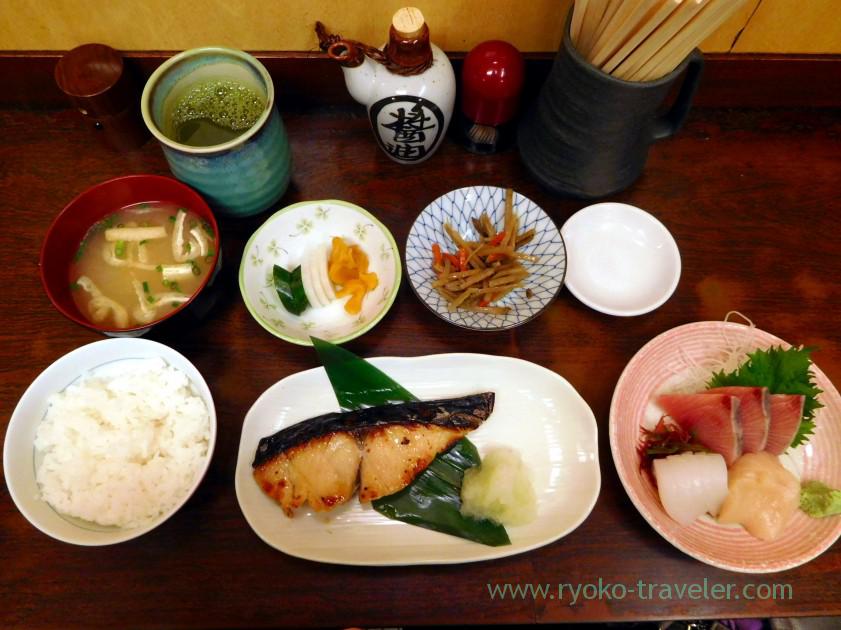 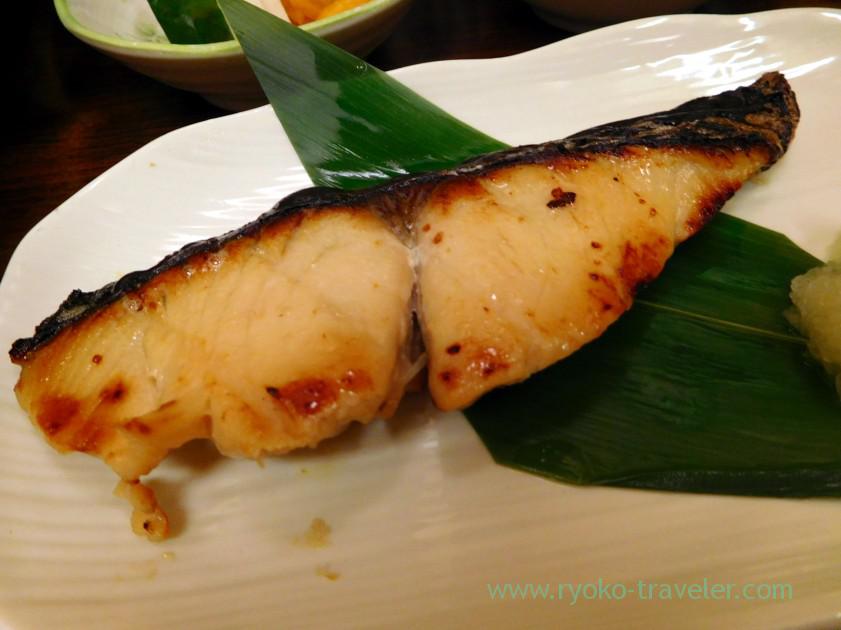 I was satisfied with their foods as same as before. But some said who love Washoku Kato’s tastes that their foods quite differ from before.

I visited Canton cuisine Keiraku in Yurakucho that is so popular as fried rice in soup. There are always much people i...

Strawberry season has finished ? Now is the best season for strawberry. But, Here Fruits cafe FRUTAS, They...

Sequel Tsukiji visiting before mid-summer coming ! I go to Tsukiji for breakfast so frequently nowadays before summer ...

Yamagata local foods restaurant have various lunch sets having Yamagata beef. Lately I was so busy studying for TOEIC...

When I was exploring good deep fried oysters on the internet, I found a deep fried foods restaurant that serve huge deep...
Qing Guang Tofu Pudding (晴光豆花) in Taipei
How to get Osaka Metro 1day Pass (Enjoy Eco Card)