When I visited Hakodate, I had dinner at Kaisen-dokoro Hakodateyama that is popular because they serve good alive squid.
But because of consecutive bad weather, I gave up eating alive squid before visiting there :p
The restaurant is located walking distance from JR Hakodate station.

I heard there’re always many guests throughout their business hour, but when I got to there 30 minutes after their opening time, there was a few guests there.
I think it’s because of bad weather. Unusually cold weather.

It takes about 2 minutes walk from Matsukazecho station (Hakodate streetcar).

Their appearance is outstanding. So, you won’t miss out. Yes, their specialty is alive squid :p 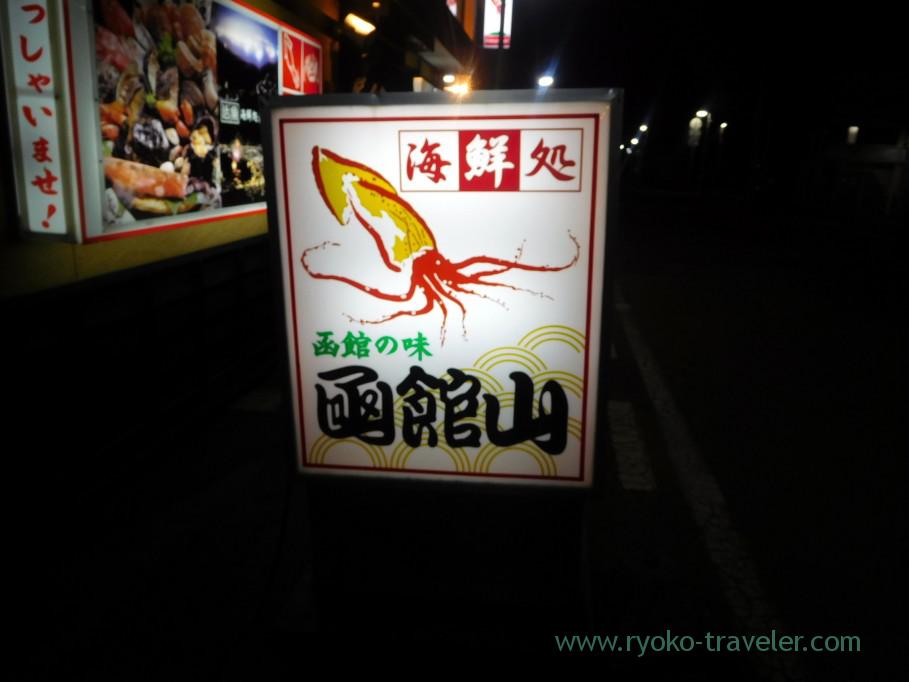 As soon as you enter the shop, you can find kitchen surrounded by counter seats. And there’re tables on the right. And there are many tables at the back of the restaurant. Rather large restaurant.

There’re buttons for calling staff on each tables. 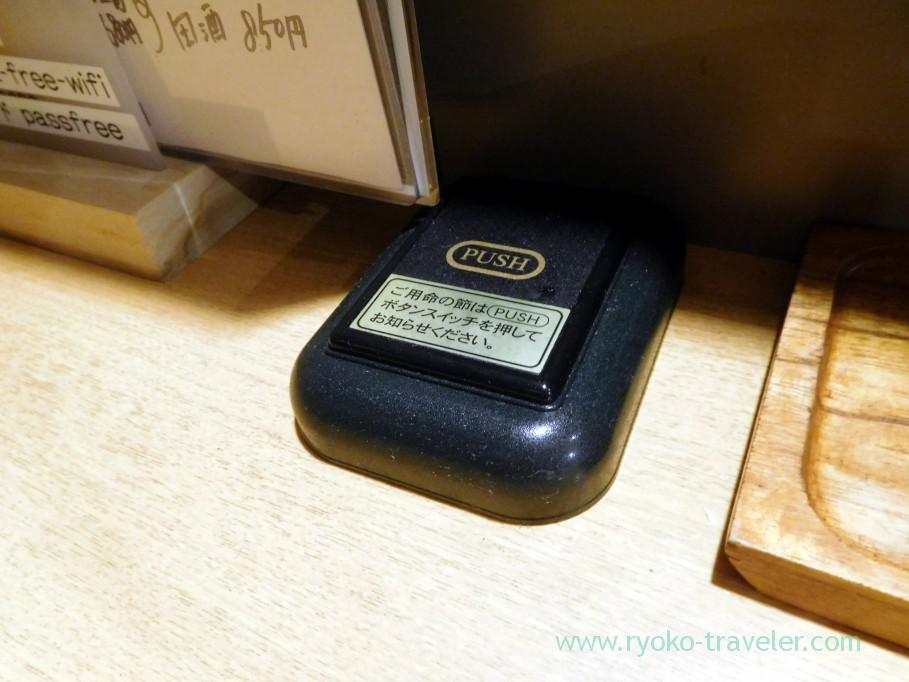 Not only regular menus but also they have today’s special menu, too.
There was alive squid (生やりいか刺し) on the menu, so I tried to order. But they didn’t have in stock all the same 🙁
Tax included.

Part of drink menus. And they offered all-you-can-drink that time. But I didn’t order it because I had schedule to go to genuine Hakodate-yama after the dinner :p

Otoshi (table fee and one small dish) is 300 yen. It looked like Nanban-duke (pickled deep fried fish). I don’t like nanban-duke, so, I ate it up quickly without thinking. Their draft beer is Sapporo Classic. This is medium beer mug (中ジョッキ, 480 yen).

They have various of Japanese sake. Of course, made in Hokkaido, too ! I ordered Taisetsu-no-Kura Kinuyuki (純米吟醸 大雪の蔵 絹雪, 600yen). It tasted light. It have rice produced in Hokkaido only !

Grilled squid with its innards on the shell

I wanted to eat squid all the same. And I thought they might have squid for grilling.
So, I tried to order grilled squid with its innards on the shell (いかゴロ貝焼き, 500 yen). They accepted my order ! Its sauce having squids’ innards were awesome. Also squid’s springy texture was good, too. It went with Japanese sake very well. I drunk the sauce up :p

Fresh herring sashimi (生にしん刺身, 680 yen) caught in southeastern area of Hokkaido.  As you see, so fresh ! I hadn’t eaten such a fresh herring ! All bones were removed !

I wanted to eat something warm food. So, I ordered it. Steamed shirogai clam with Japanese sake (白貝酒蒸し, 680 yen).
There was also normal clam on the menu, but we can’t eat shirogai with easily in Tokyo area. So, I ordered this.
Its shell is large and it looks like dish. So, it is also called “Saragai”. “Sara” means dish in Japanese.
But I think it looks like animal’s ears :p
Of course, its meat had much extracts and was delicious. But this soup also had much extracts of the clams. I drunk it up 🙂

Another, many foods on the menu attracted me ! I want to visit Hakodate again ! Of course, this restaurant, too !