Both South and north Indian foods for vegetarian.

I took a day off the other day, and had lunch at popular Indian foods restaurant in Mizue.

This restaurant serves vegetable dishes only.
I don’t know whether they don’t use something animal foods at all or not, but they don’t serve meats dishes and alcoholic drinks.

There is a table for buffet on weekends in front of the kitchen.

Dosa.
I didn’t know what to do first because this was second time to see dosa and my dosa last time was much smaller than it.

Anyway, I cut its center with a knife.

Those potatoes were spicy and non-sogginess taste. So tasty. Also its crepe around potatoes was crispy.
In addition, my set have…. 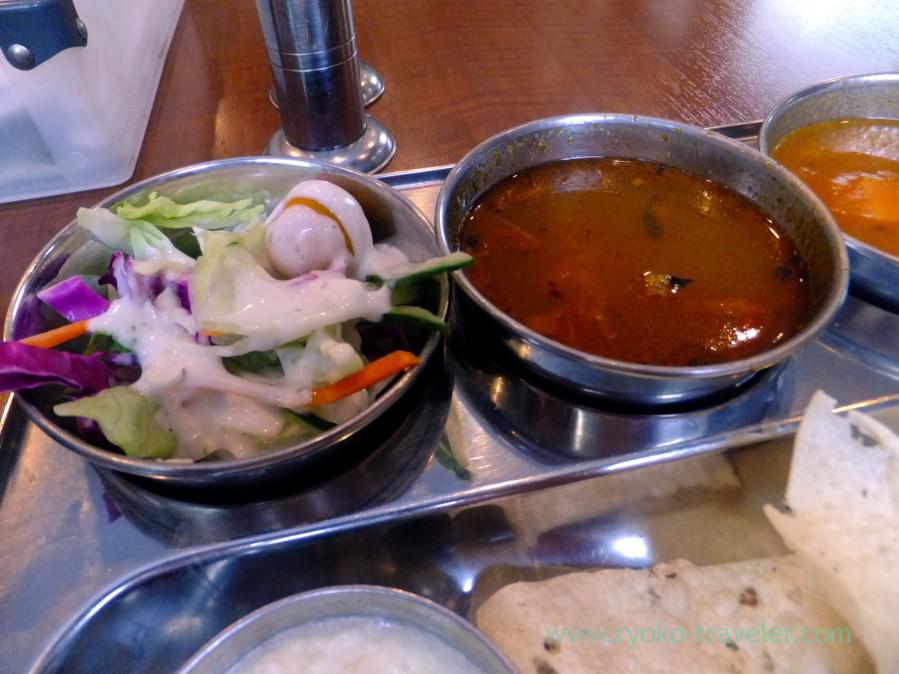 Rasam was sour and spicy. I like this taste 😀

The sambal had lots of vegetables and beans melted in it and slight viscosity.

And the set have one drink.

I choiced a herbal chai. It had plenty of milk.

I never though that I could eat such an  inexpensive and tasty Indian foods lunch within Tokyo.

Caretta Shiodome have a branch of Saryo Tsujiri that is so popular kanmidokoro in Kyoto. And there are always many peop...

Precious ramen could be eaten once in each month. Though I visited Torito in Tsukiji market several times, this was the...
Cafe at night (Funabashi)
Takoyaki (Kounodai)