Goryokaku was one of my longing sightseeing spot. Finally, I visited there !

I thought Hakodate isn’t so cold because it’s located closest to main island. But actually, it’s too cold even near April. And, there was snowstorm 🙁
Well, this is the north island. 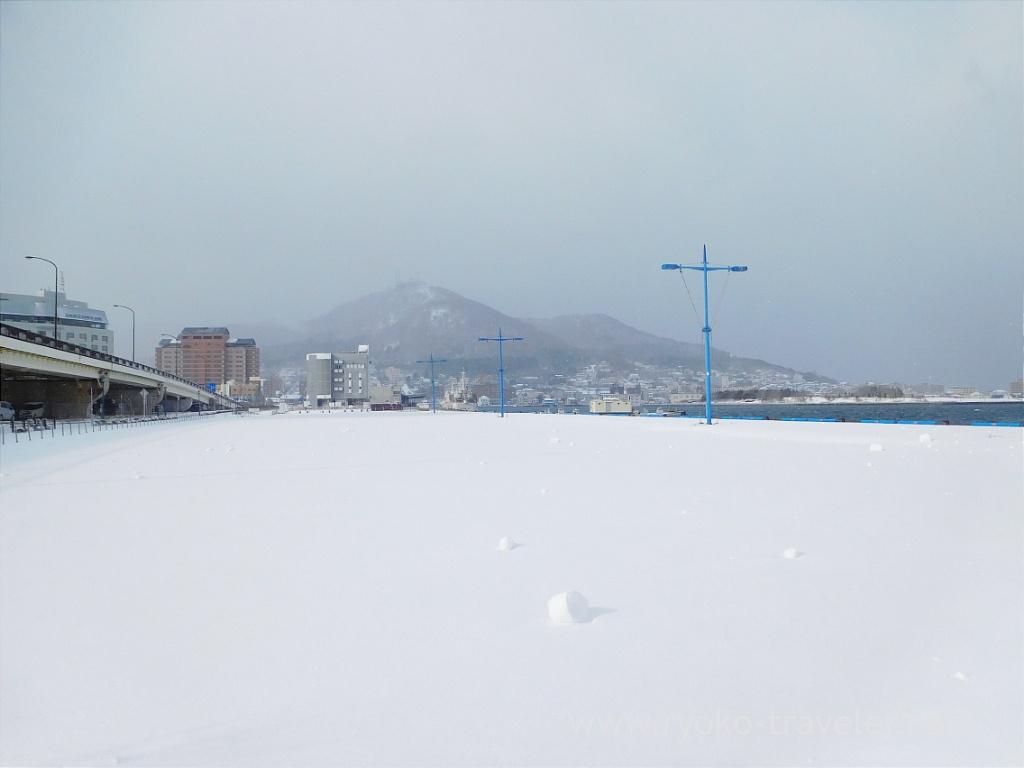 Pentagon tower from the bottom, too

Goryokaku Tower is not so tall and large tower. But it’s nice pentagon tower. Top of the pentagon is observatory. There’s a souvenir shop and ticket office of observatory on the 1st floor. And cafe and Gotoken EXPRESS is on the 2nd floor.
Though fee is required for observatory, but another is free of admission charge. So, I intended to go to there again the next day for buying souvenir. There’s a ticket office on the 1st floor, so at first, I bought a ticket at there and the lady in the office said to me “Go up with the elevator over there”.
The elevator was close to the ticket office. Admission fee of the observatory is 900 yen for one adult (Official website).

Goryokaku is one of the great spot because you can enjoy four season. Cherry blossoms in Spring, forest green in Summer, maple leaves in Autumn and snow in Winter.
But I visited there this time on another season. So, but because of unusually snowstorm the previous night, I could see such a beautiful snow view !
Blue cover disappointed me a bit. But still it’s beautiful ! I heard it’s more white in the middle of the winter. The contrast of the moat and snow is nice. Goryokaku is huger than expected.
Because the observatory isn’t tall, the view is gigantic. So, this garden can’t fit in a photo :p I stood by the wall. Impossible to fit all the same. They offered me to join History guide tour at observatory with 200 yen. But I didn’t join because I didn’t have much time to stay there this time and I wanted to see freely.
Goryokaku was built as Bugyosho (one of the official of Tokugawa shogunate) by Edo Bakufu (Tent government). And this was the first Western-style castle in Japan.
I wanted to ask about the history if I had much time.

I want to see it every season.

When I said to my friends, "I'll visit Onuma Park", almost all of them recommended "Onuma Dango". So, I intended to buy...

When I visited Sapporo, I felt like eating Sapporo miso ramen all the same. So, I searched for good miso ramen around Sa...

I reserved Tsukasa that is sushi restaurant for 1st dinner at Hakodate. I telephoned them at the previous day and I cou...

I was in Hokkaido. Of course seafood is awesome, but I wanted to eat jingisukan, too. So, I went to Genghis Khan Meimei...

As soon as I got to Hakodate airport before 9 a.m., I hurried to Hakodate morning market with empty stomach. Of course,...

Speaking of Hakodate, I know View from Mt. Hakodate (函館山) is one of the best sightseeing spot as well as Goryokaku. Esp...
Comfort Hotel Hakodate (コンフォートホテル函館) in Hakodate
[Tokyo] Zeitakudon at Tsujihan Nihonbashi (日本橋海鮮丼 つじ半 日本橋本店)