My friend said to me, “There’s interesting Chinese foods restaurant in Makuhari area”.
So, I decided to follow him 🙂 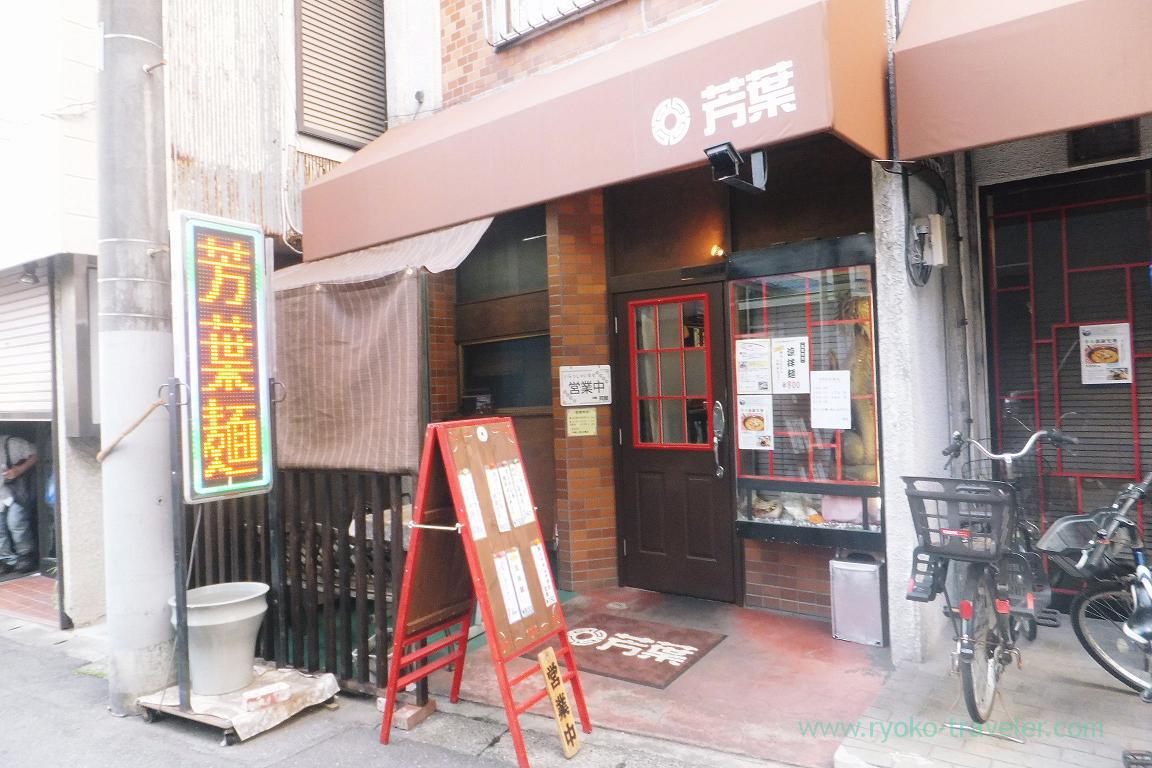 I had never heard that name. I questioned him how to know the restaurant and he said that this restaurant was featured on a TV show.

The restaurant is along the Ginza shopping street in front of Makuhari station.
Nevertheless it is called Shopping street, as you see, almost every stores and shops are already closed and now it is almost a residential area. 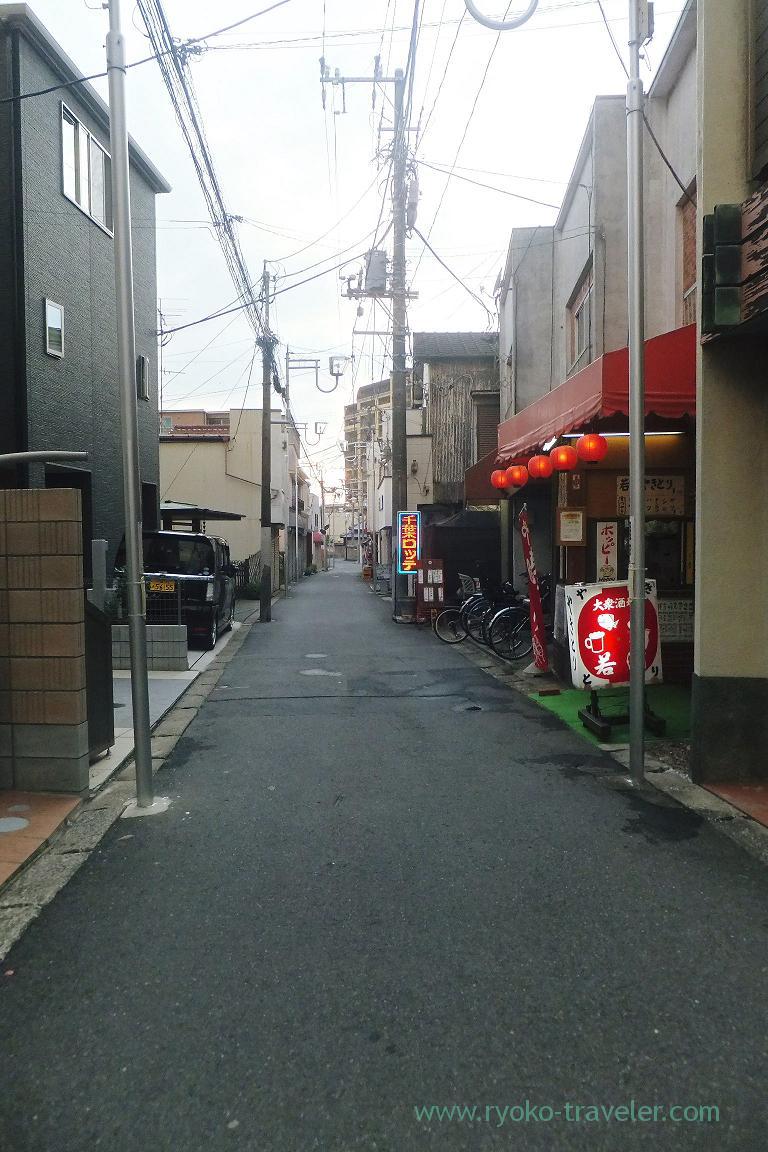 The restaurant seemed to be renovated recently. The extended space is like stylish bar. 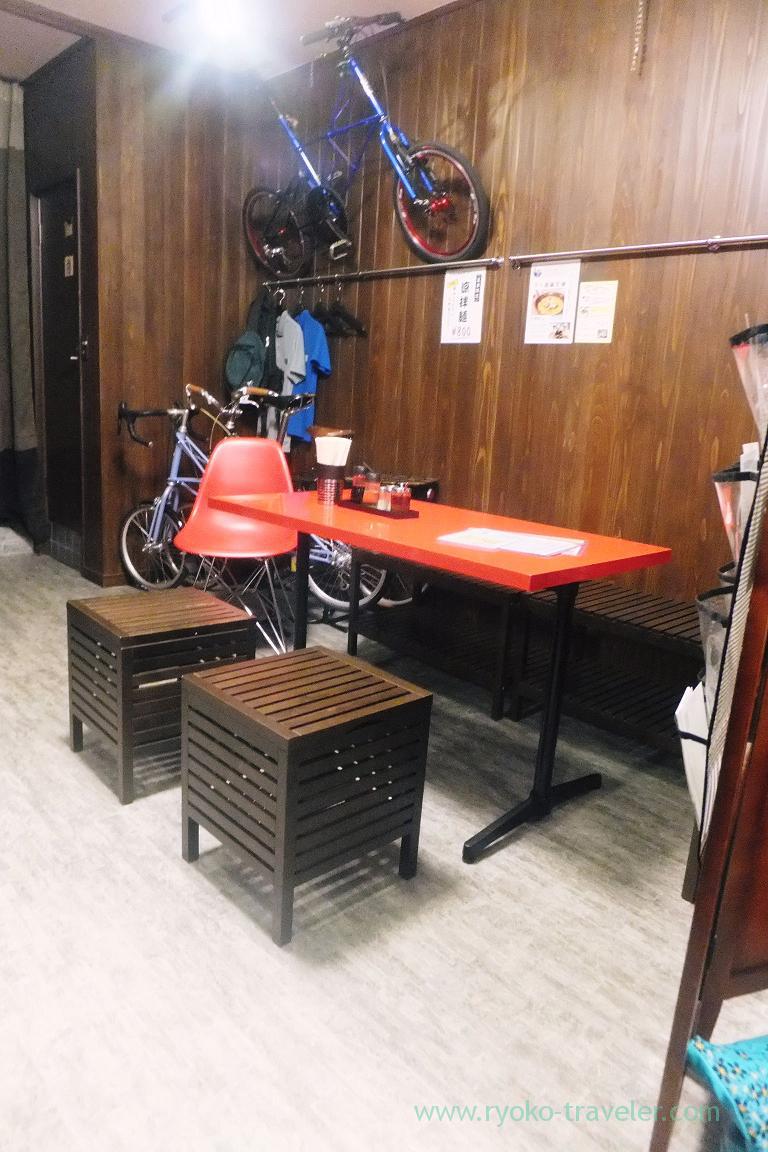 Well, I intended to eat Mt.Fuji-like fried rice that was featured on the TV show, but it attracted me.
Tantanmen noodles named “Karakara Guranji men”. It was invented by this restaurant with the younger comedian group named “Guranji”. It looked very spicy. 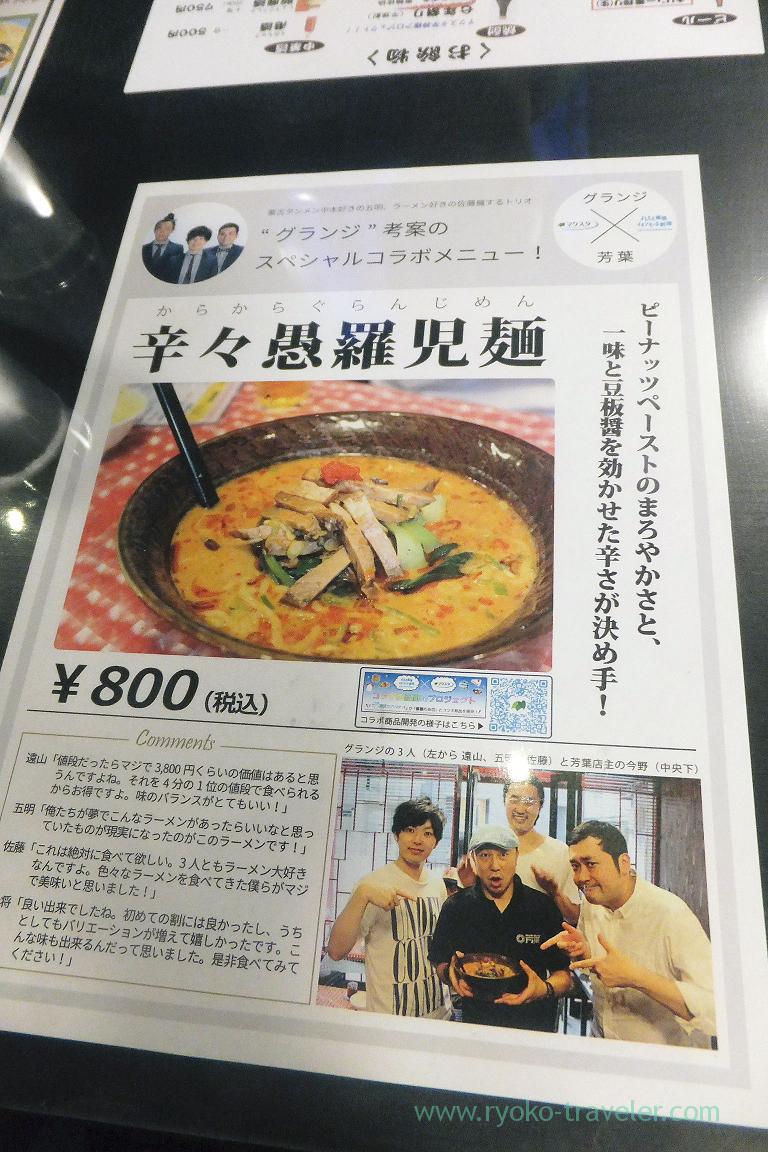 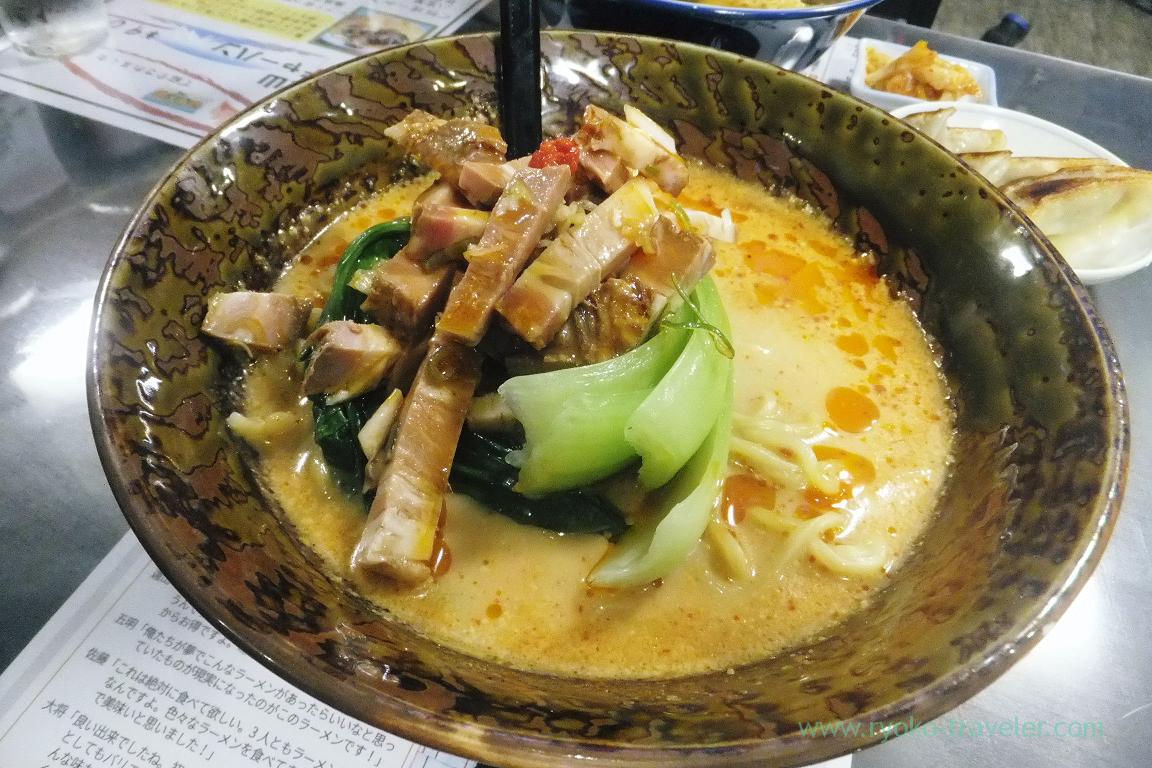 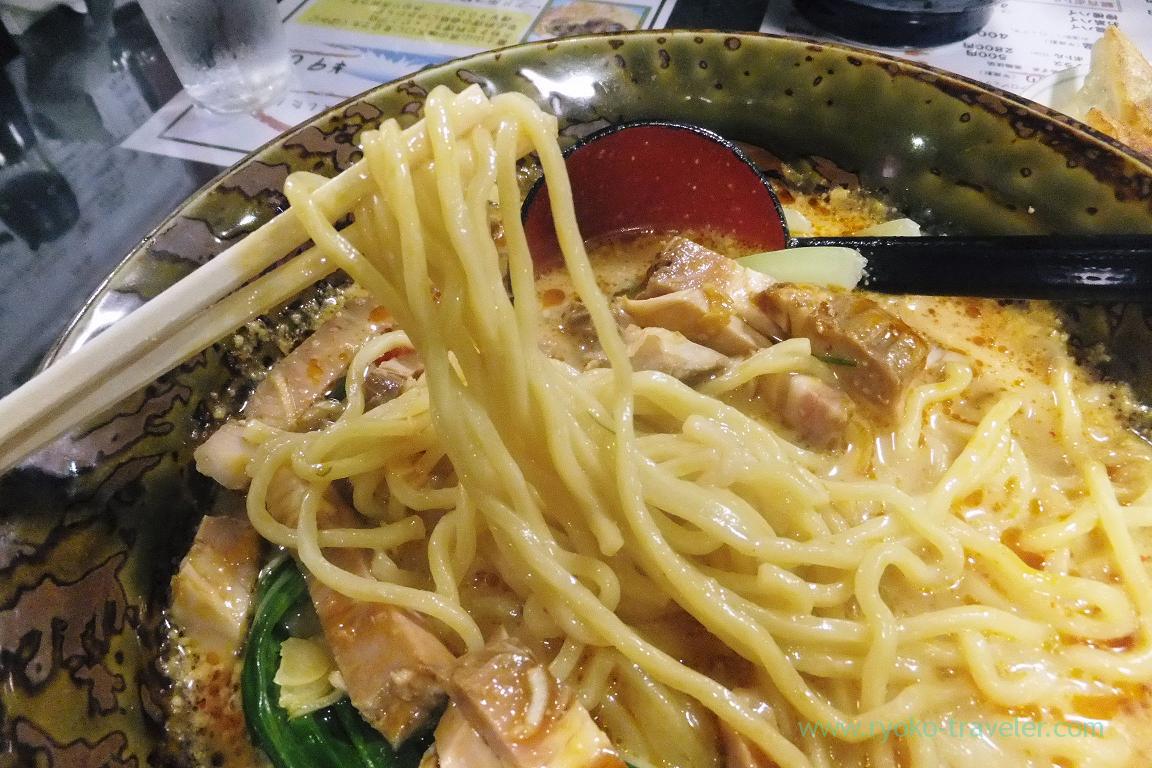 Much slices of chili pepper was floating. It was rather spicy. The soup itself was mild based on peanuts paste.
I liked it.

It was dressed with a thick starchy sauce having wakame seaweed and beaten eggs, and hard to get cold. It was still hot until finished eating.
He ordered it With gyoza (餃子セット, 200 yen) and I tasted it, too. This gyoza was very tasty.
Its surface was crisp and the inside was juicy. 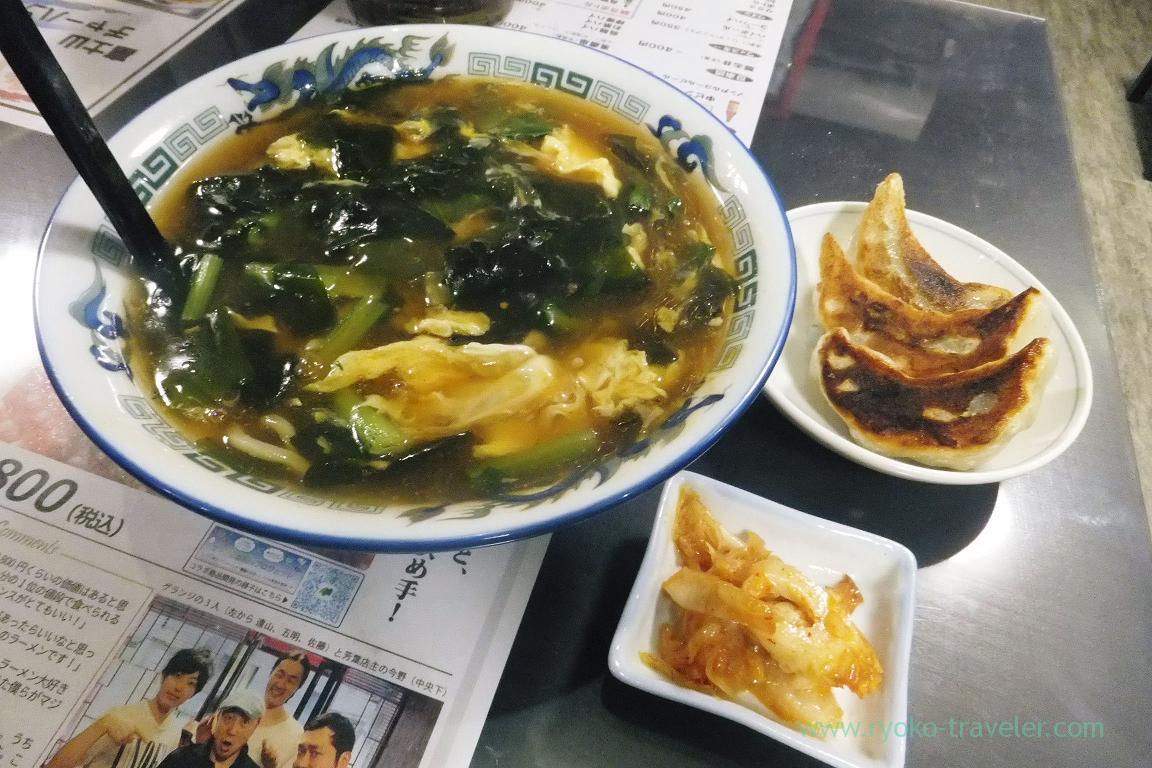 I want to try Mt.Fuji-like fried rice and eat gyoza again next time !

5th temple is home of God of wealth named Ebisu. The fifth temple is Tofukuji temple.It was getting darker when I got ...

Menya Chojiro (麺屋 長次郎) was open in Motoyawata last year. They serve Jiro-style ramen. I like their ramen. Chojiro is ma...

Precious delicious udon shop in Chiba I got off at Kamagaya-Daibutsu station for the first time. Why ? It is becaus...
Shintomicho : Early summer and Autumn in a course at Sushi Hashimoto (鮨はしもと)
Yotsuya-Sanchome : Long-awated fig parfait (フクナガフルーツパーラー)