Notice:
Tsukiji Market closed in 2018.
Yonehana moved to Toyosu Market as well as another shops.

www.ryoko-traveler.com
Unagi Yonehana (うなぎ米花) in Toyosu Market
Toyosu Market has started from October 11. Many shops are open inside the market, too. At first, I visited Yonehana on ...

As I said now, there’re English and Chinese menu.
But sometimes those are already sold out even in the early morning.

But at least, sashimi bowl, yakitori bowl and eel bowl is in stock.
If you can’t decide your order, I recommend sashimi bowl.

Record of my breakfast in 2011

Sorry, I don’t have the picture. When I visited there Yonehana for the first time, I ordered sashimi bowl (海鮮丼, 1500 yen). I decided to order it before visiting.
Their sashimi bowl is highly recommended by Tsukiji bloggers.

I visited there again after a week that I visited Yonehana for the first time for eating yakitori bowl (1000 yen). I was surprised with the Mt. Yakitori (and laver) ! The charcoal-grilled yakitori is so soft and delicious ! This was the third time. And the Jiro-san asked me if I want to try omakase. I said YES ! I became regular customer of Yonehana !
Boiled foods were served and I ate it up before taking this photo :p
A slice of sashimi at Yonehana is large. It’s said to be Yonehana Standard ! This was the first time to eat out after I injured my stomach in Uzbekistan. Healthy body is wonderful !

When I entered the shop,  the waiter said to the kitchen,  “One omakase !!!”
Finally my foods came automatically ! That day’s omakase was vegetables tempura ! Its coating was crisp. I thought I can’t eat tempura up in the morning, but it wasn’t heavy. So, I could eat it up ! At first, I thought I couldn’t eat up tempura in the early morning, but it wasn’t oily, so I could eat it up easily.
The lotus root’s texture was good ! That day’s omakase was… Look at it ! The tastes of Winter ! Yellowtail sashimi !
Though I hate cold Winter, we have much “delicious” in winter. One of the thing is it. Yellowtail. Yonehana’s sashimi is so thick. 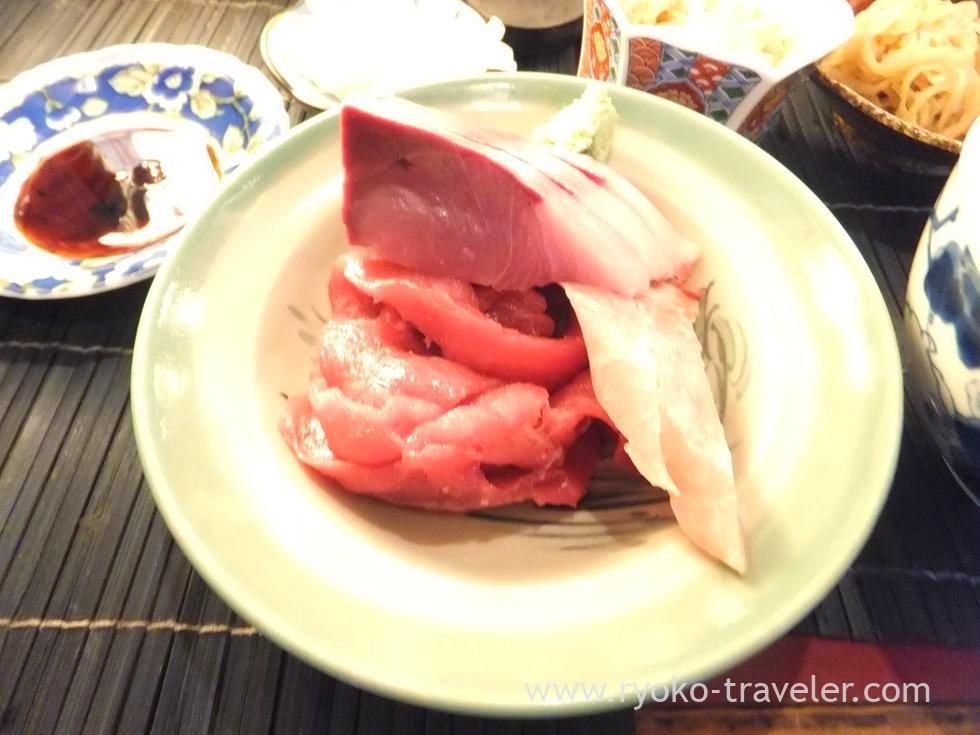 And another boiled foods and sprouts. 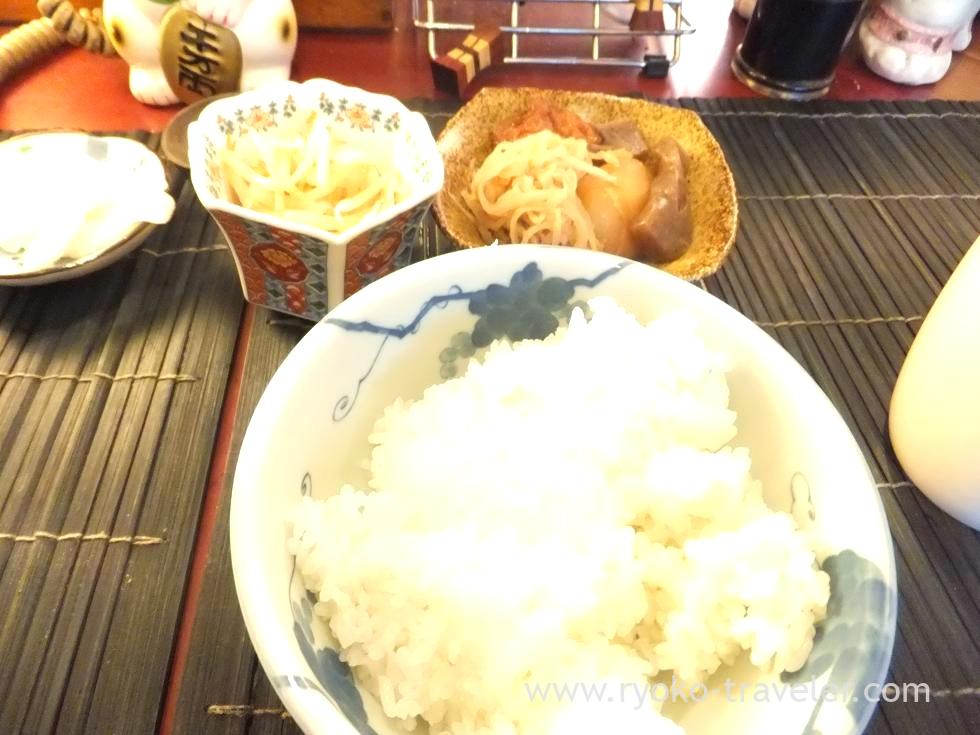 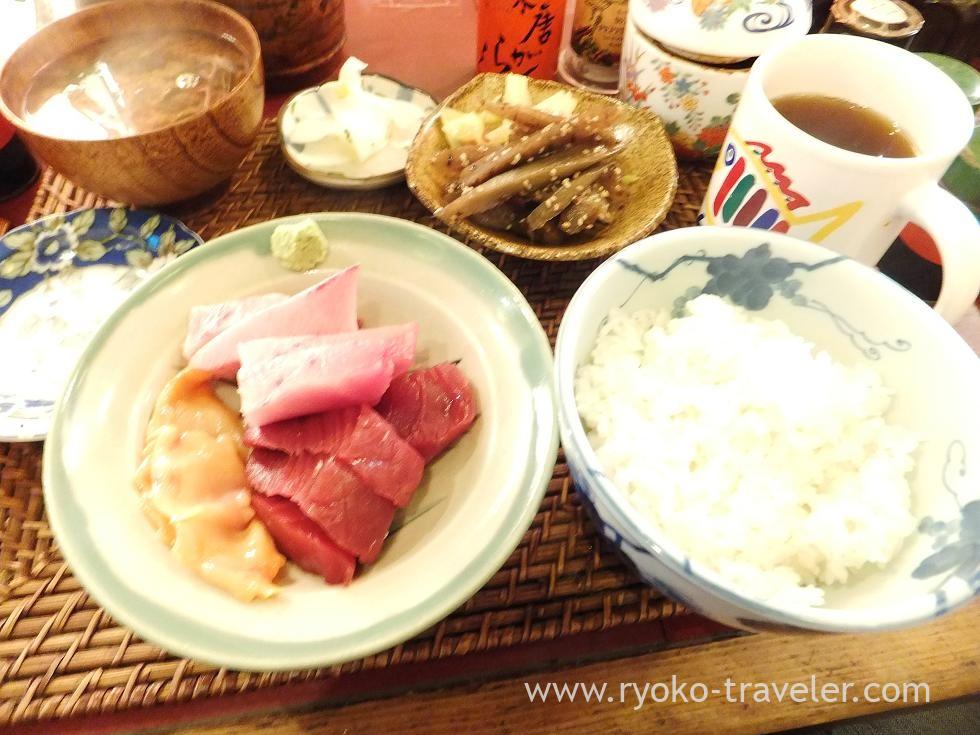 Collar of middle-sized yellowtail called WARASA in Japanese and fried vegetable, miso soup.
Grilled fish and boiled fish…Double entree. Too much for me… But delicious. Boiled spear squid with soy sauce. There’re squid’s leg inside the body. I love squid. So I was really happy to eat it as breakfast. 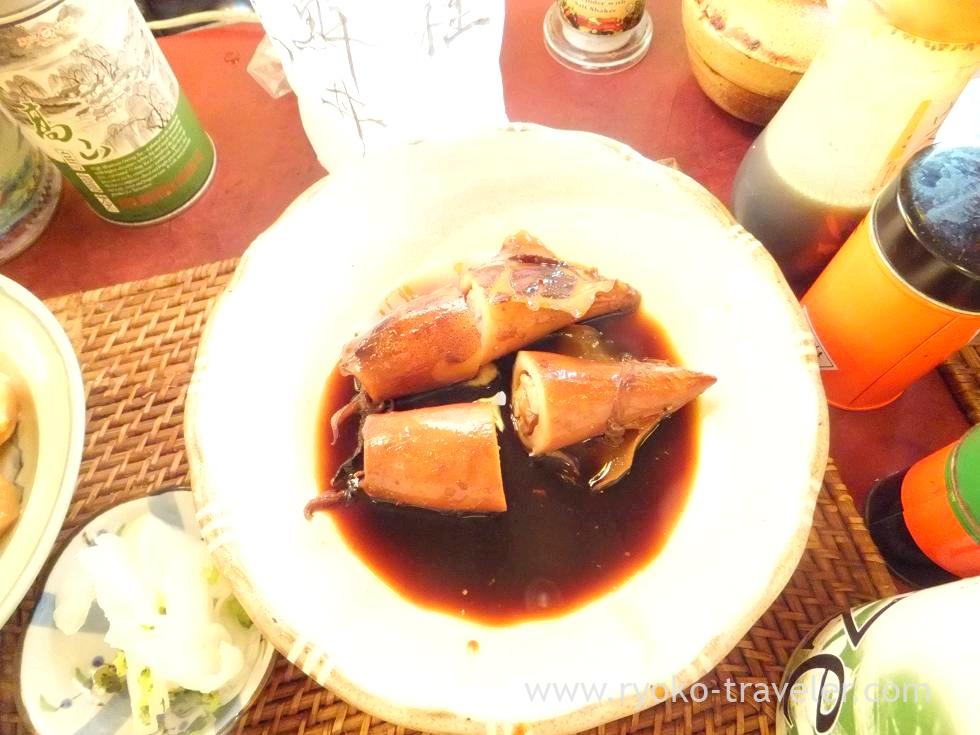 But. Double entree again 🙁
Consisting of bony fish parts and big potatos boiled in soy sauce. Umm. I have to bring plastic container when I visit there. 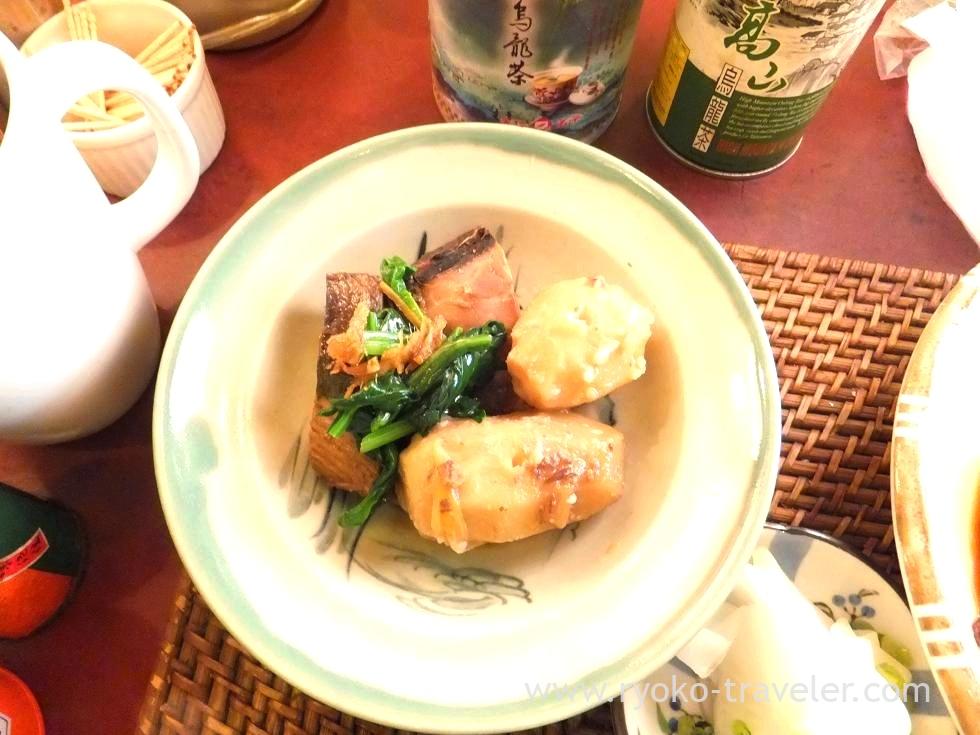 Young tuna called “MEJI MAGURO” in Japanese.
The person who was sitting next to me made seasoned tuna bowl with it and soy sauce. It looked delicious. Yonehana’s sashimi is cut so thick, so even if you put it into soy sauce for a while, it don’t become too salty. 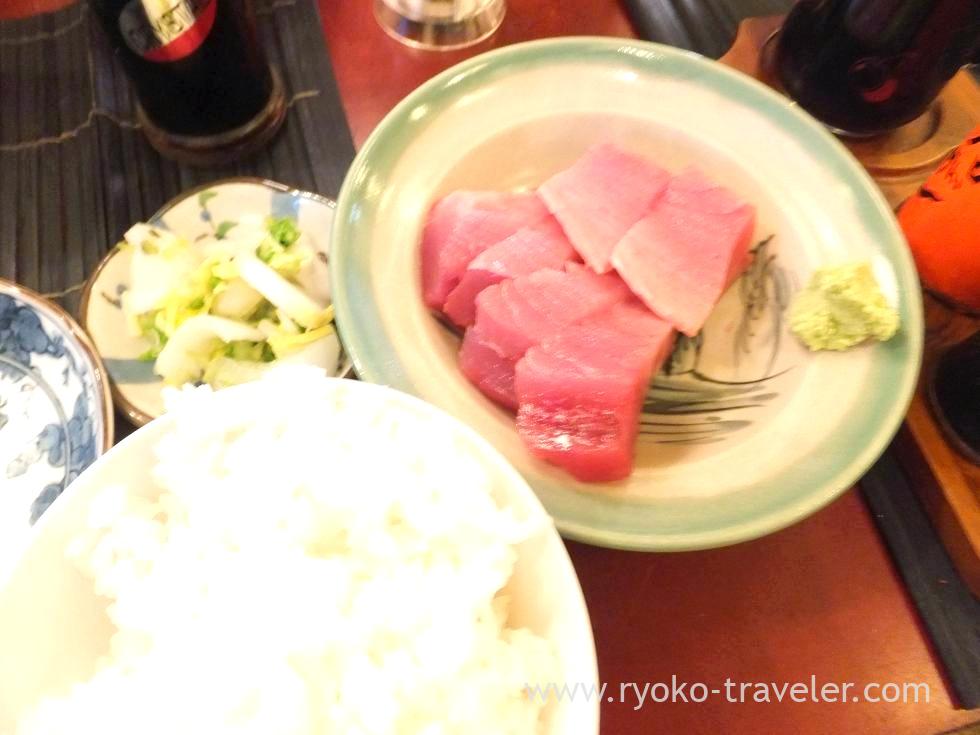 That day’s omakase was flat fish. I hear there are some kinds of flatfish.
To tell the truth, I didn’t like flatfish very much.
Because it doesn’t good looking. Don’t you think so ? Also flatfish have sometimes fishy smells. But this flatfish had no bad smell. And the roe was delicious. And the meat was fatty and sweet. 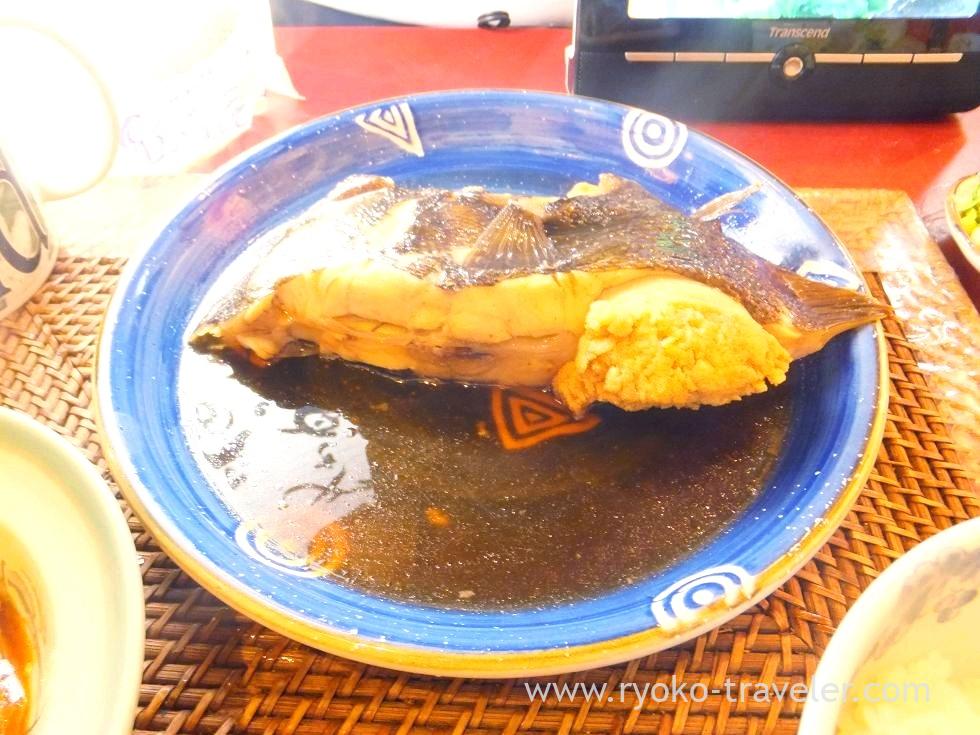 And simmered tofu and beef meat with soy sauce. The tofu was smooth tofu. 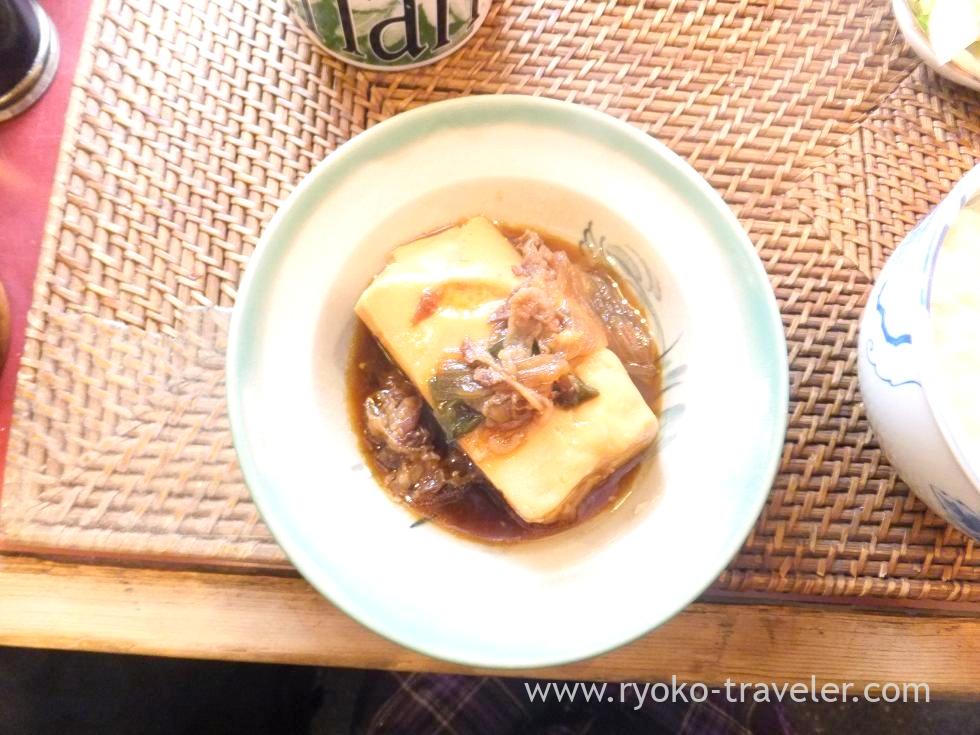 When I visited there, I thought this would be the last time to visit Yonehana in 2011. Actually, it was. This was the first time to eat whale meat. Umm. It’s tough. But the seasoning was good. 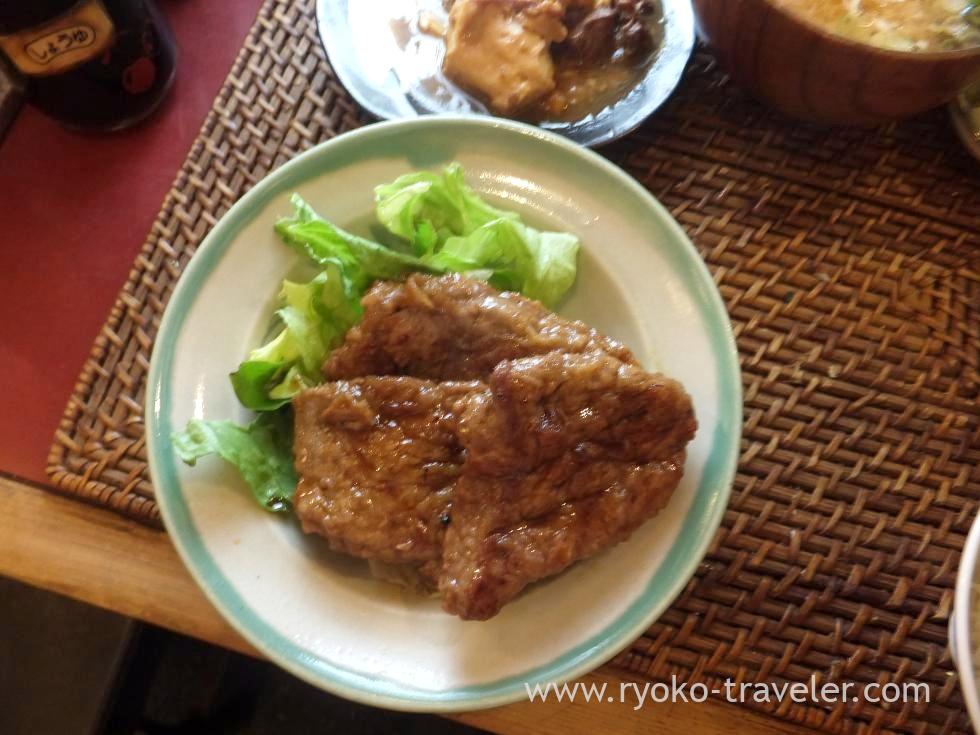 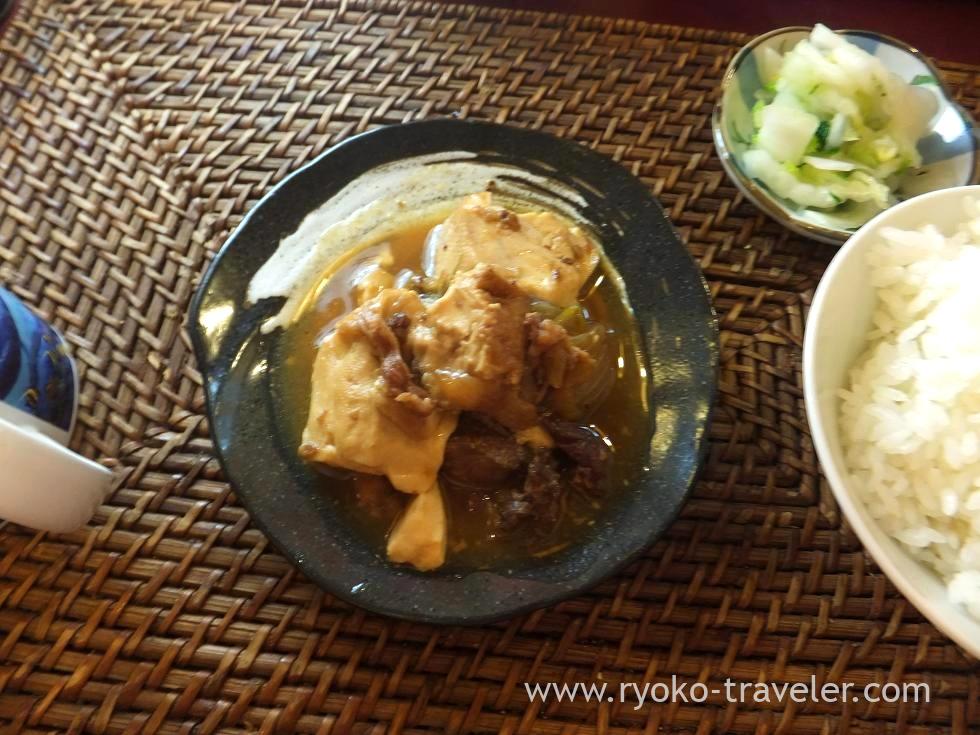 Follow the line 30 minutes before the opening time ! I took a day off for just going to Toyotaya the other day :P Bu...

I headed to the roasting place that I posted about it yesterday. Arise Coffee Roasters Blue Bottle Coffee...

New year is drawing near, so I thought how is Tsukiji, and I went to see, But Tsukiji Market opened as usual unexpected...