Tsukiji market serve my delight from the morning !

I had breakfast at Tsukiji after half a month absence 🙂
It is the day before yesterday.

I was dying for deep fried foods, so I entered the shop without hesitation. 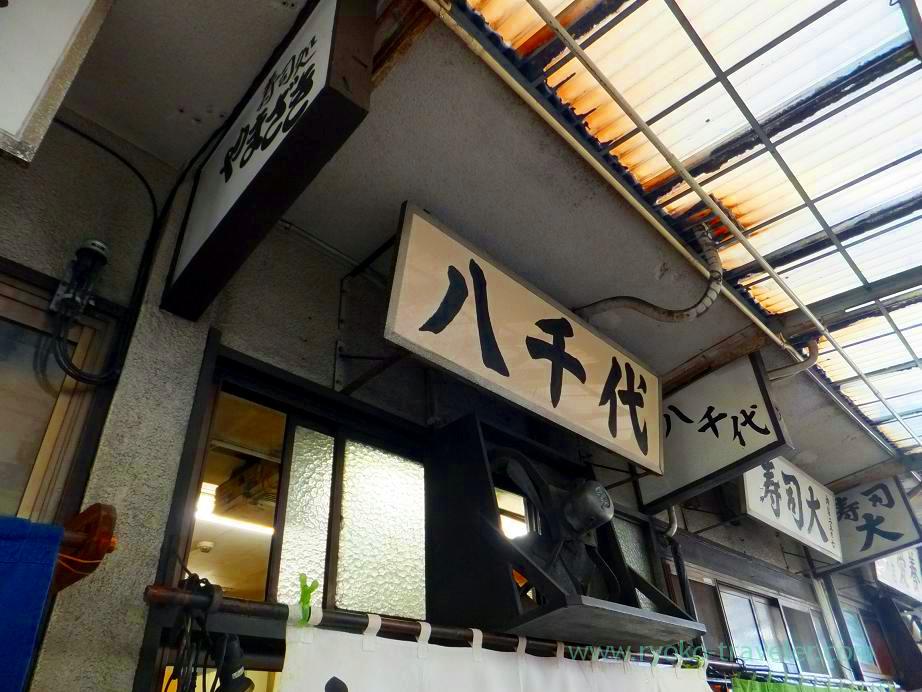 Tsukiji Market : Two days breakfast at Tsukiji
Deep fried oysters set (カキフライ定食, 1400 yen) Though I also wanted to eat scallop, I ordered oysters only. Well, this is already February! I must eat oysters to the full before it is too lat...
www.ryoko-traveler.com

I knew the eatery serve ayu karaage in this season by another blog and I wanted to eat it.
So, I confirmed that there was the word “Sweetfish karaage” on the menus, and entered the eatery.
Then, I said to the waitress, “One ayu karaage dish and rice, please ”

The waitress said, “The dish have two ayu. Is that OK ?”.
I thought her saying means “Can you eat as many as two ayu ?”

So, I said “OK. No problem” with a light heart.

While waiting, I checked the menus on the walls and variety of teishoku sets. 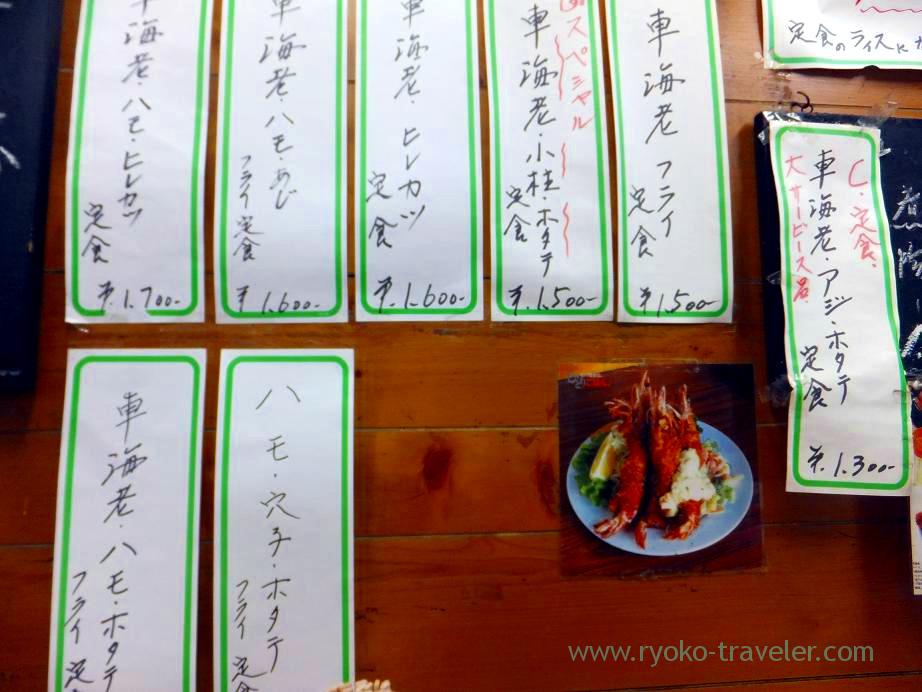 Pike conger has taken place of oyster because it getting warmer.

I thought simmered beef and tofu is not good for main dish. I also thought no one ordered the set.

But the instand a man came in, he said “A” and sat down on my opposite side.

Just after them, a pair who was back of me said “What is A ? (Looked at the menu, then) Umm…Sounds yummy.”
And they ordered it.

In high demand 🙁 Sorry.
Especially men like the dish, I think.

After a while, my sweetfish set came. 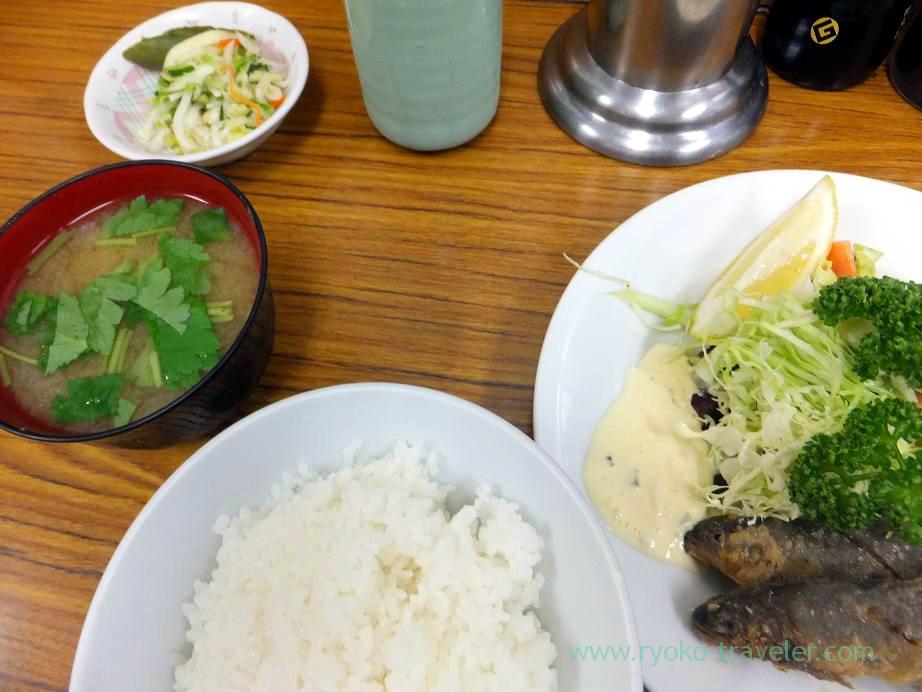 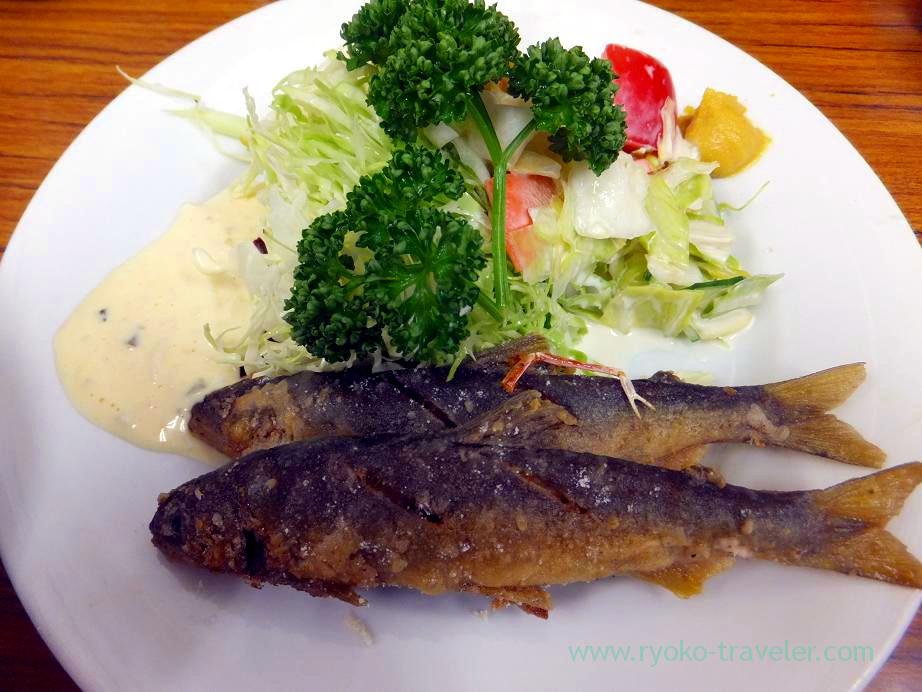 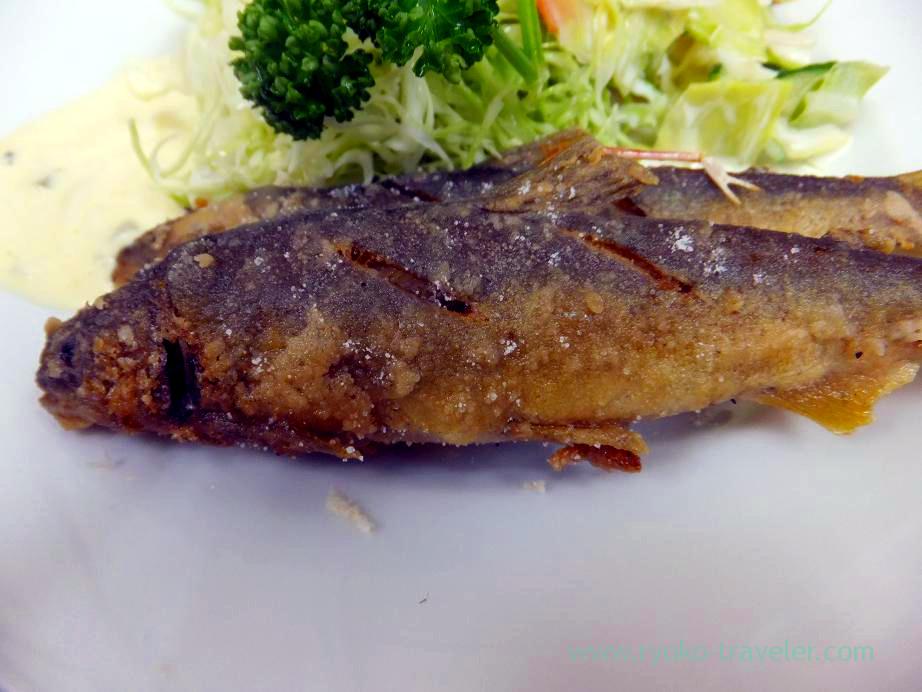 Her saying “Is that OK ?” means “Is that enough ?”
I understood.

Well, it couldnt be helped.

The ayu was entirely fried. I could eat everything. The instant I baited from the head, I felt fresh bitterness in my mouth.
It was tasty. Good! I love ayu.

Lots of vegetables were on the plate.
I usually leave shredded cabbage on my dish at restaurants.
Well, Tsukiji also serve good vegetables. I could eat up.
And I also could eat parsley. Though I never eat parsley another restaurant.

Coleslaw was good, too.
I’ll visit the eatery soon again. I want to eat pike conger next time.