My hotel was 5 minutes walk to Registan.

I woke up early in the morning, and loitered around.

It was very cool in the morning.

At first, I walked in Asia Samarquand Hotel. I went to courtyard.

Restaurant in the daytime ?

Of course, there weren’t anyone around there yet.

A policeman asked to me on my way to Registan.
(Whoops! I don’t have a passport :()

I saw which he pointed.
Distant …… 🙁
I wanted to go up a minaret,but I didn’t have breakfast yet.
Furthermore, I couldn’t trust him.
Why a policeman ask me to go to minaret such a early morning ?
So, I rejected.
He went off with his sad 🙁

(I heard later, policemen want to let tourists go up a minaret to pick up a bit of money)

The later, I reached to Registan. 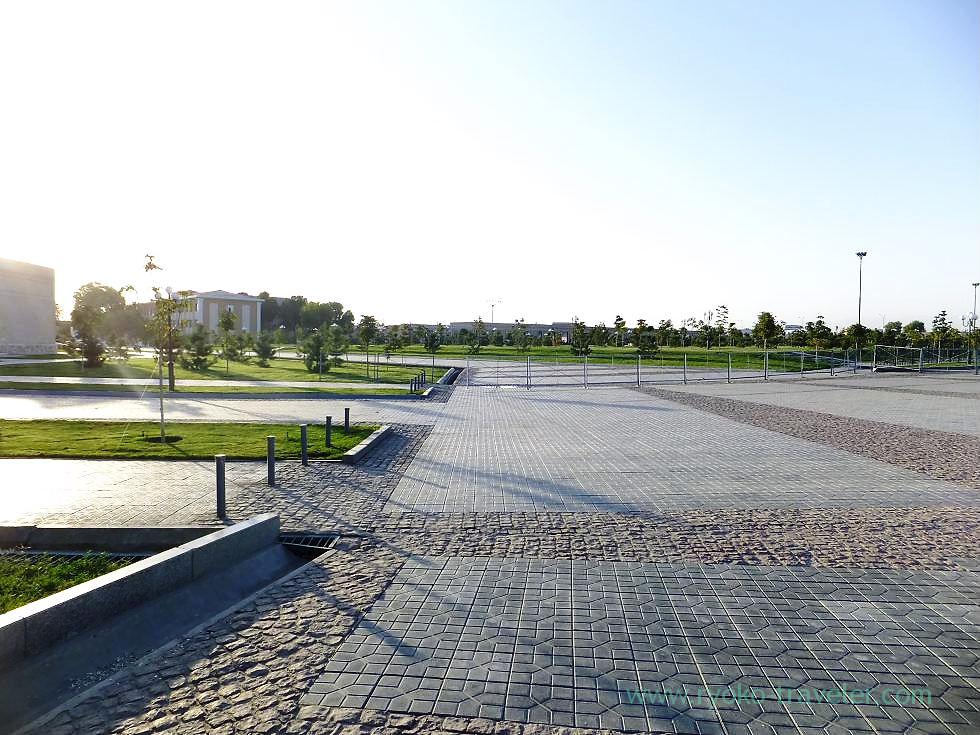 Cleaning. I heard they live neighbourhood and they clean the road independently.

Later , I tried to go into alley, and came out on to the main street.
I walked around. Again, a man asked me.

(I thought, he want to ask me whether I have been to Shahrisabz :()

He backoned me to a side road.

I recognized he is a taxi driver. He tried to get a passenger such early.

I said, ‘I went to Shahrisabz yesterday. So, I don’t do today.’

He doesn’t understand Endlish well, (well, also my English is broken 🙁 )
so, I said ‘No’ continuously.

Then he gave up and went off.

I heard some Uzbekistan people doesn’t understand past tense. Maybe he doesn’t, too.

I found actual Uzbekistan is different from the information on the Internet and books like ‘Chikyu no arukikata’.
But it is truth that ‘unable to communicat in English in Uzbekistan’.
But they try to communicate in English continuously for their business.
I got courage from them 😀

Trip to Uzbekistan 2011 Summer – the 2nd day, Sightseeing in Bukhara

Moving to Bukhara from Tashkent by air early in the morning. I had a breakfast about 6 a.m. Hard bread, it was not good,...

Blue sky without clouds, blue architectures... blue world is there ! (I want to finish uploading articles about travel ...

Trip to Uzbekistan 2011 Summer – the 3rd day ,Going toward Shahrisabz.

I ate at buffet as breakfast at hotel. A lot of French tourists were there, so there are foods like galette. I ate it,b...

Uzbek folk dance dinner at madrasa before getting dark. We took dinner seeing uzbek traditional folk dance at the squar...

From Samarkand to Tashkent by SHARQ I got up early in the morning, and I got out of our muggy room and went out to take...