Coffee Shopin always attracted me when I visited Tokyo Mamehana Kobo nearby.
THey have such an great atmosphere.
But this is not simple cafe that have good atmosphere.

Tokyo Mamehana Kobo (東京豆花工房) in Awajicho
Recently Taiwan is one of the hottest place to visit for Japanese. So, many shops and restaurant that serve Taiwanese sw...

But still this appearance is great. By the way, they are called “jun-kissa” in Japanese. Jun-kissa means a cafe that don’t serve alcoholic drinks. So… Starbucks is Jun-kissa, too ? OK ?

“ANPRESS” is their specialty.
I haven’t heard such a word. They made this word. Only one in the world.

They are close to Awajicho station (subway) and next to Tokyo Mamehana Kobo. Diagonal from Kanda Yabusoba.

This cafe has been there since from 1933. Long-established cafe.
Smoking is permitted in the cafe. All area. There’s such an outstanding ashtray on each table. Ashtray is large or owl is large… :p

There’re tables having four chairs or two chairs. The interior is based on brown and red chairs are attracting.

This is menus. Drink, foood, fresh juice and so on.

And also they have dessert set, too.

What did you imagine about Ampress ? This is answer.
Anpress (アンプレス, 450 yen). Anpress is baked sandwich with mashed anko (tsubu-an). Butter is put on the bread, so, I felt strong salt. And sweet anko. “Salty” and “Sweet” went into my mouth together. Delicious.
It was baked over an open fire. So its outside was crisp, but the inside was soft. 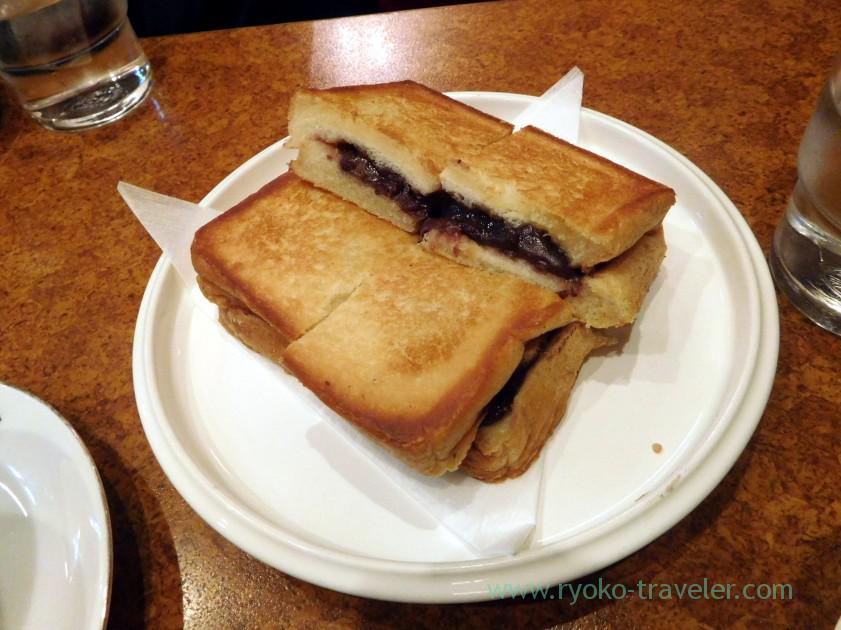 We were three and shared one anpress. It was best for us because we had already lunch. Though the lady next to us ate one anpress by herself, but I think Whole one is too much for me. If I’m hungry, still I want to share it with someone.

By the way, they require us to order one group one anpress.
I think it takes much time and effort.

Soda (ソーダ水, 500 yen) have such an mysterious green.
Though I rarely have soda, when I visit kissaten or old cafe, I feel like having soda.

Their blended coffee (ブレンド珈琲, 500 yen) is,,, I have to say, it is too strong and sour because they use twice as many coffee beans than normal. I don’t like it, but it have high reputation among people who like strong coffee. Umm. My tongue is still child… :p

A branch of Ikaruga (斑鳩) is in Tokyo station and they serve gyokai tonkotsu ramen. They serve three levels of ramen. Normal, rich and greasy with wide noodles.

Hirai : With hot cake and coffee float at Coffee One More… (珈琲ワンモア)

Nostalgic atmosphere remain. I had wanted to go to the kissaten in Hirai for a long time because I heard they serve del...

Spring has come along with lamb ? My friend invited me to Persil to have dinner with lamb the other day. Of course, I ...

Fancy stand-up-eating izakaya ! My friends and I visited Ginza Shimada the other day. As its name, Ginza Shimada is l...
[Toyosu] Ajidokoro Ichimura (味処いちむら)
Enji (煙事) in Ginza