Asakusa Underground Street, it was so a nostalgic atmosphere 🙂 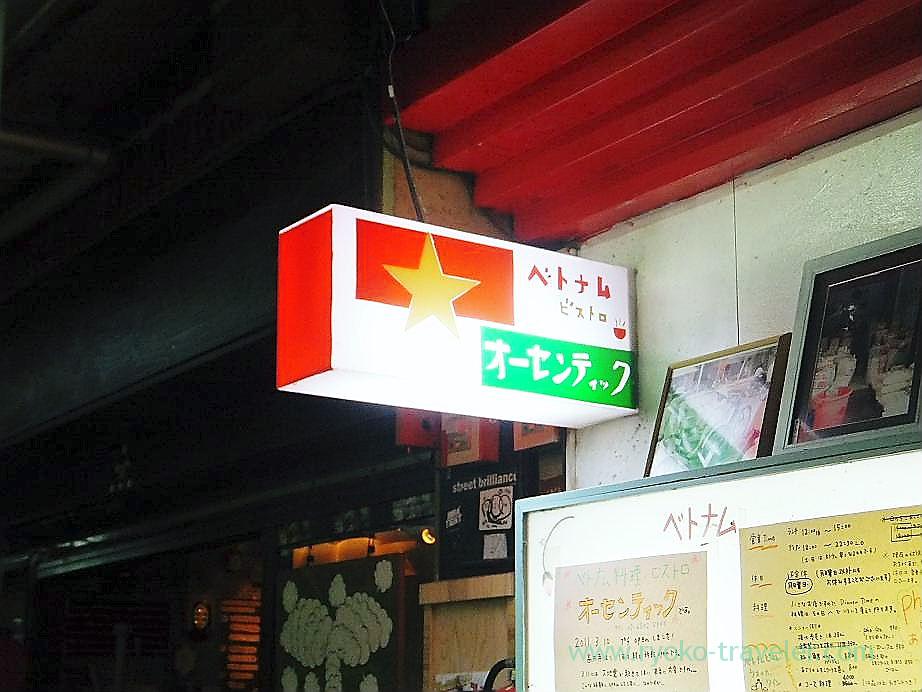 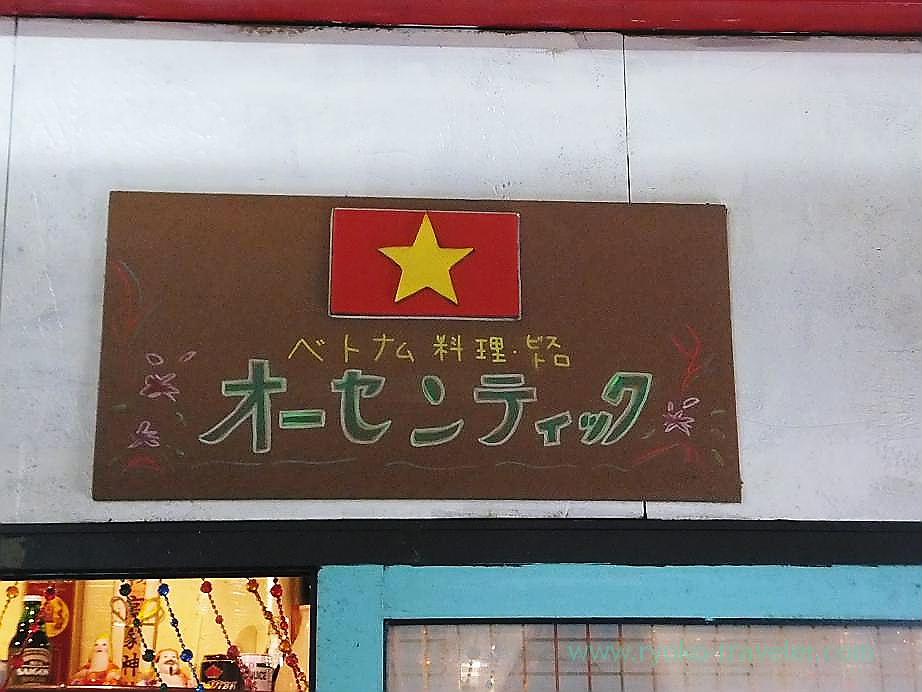 There were about only 10 chairs. Only counter table in the restaurant and there
were a plastic table and some chair in front of the restaurant.
It looked like street stall 😀

We ordered “Today’s special course”. 13 dishes came one after another timely. 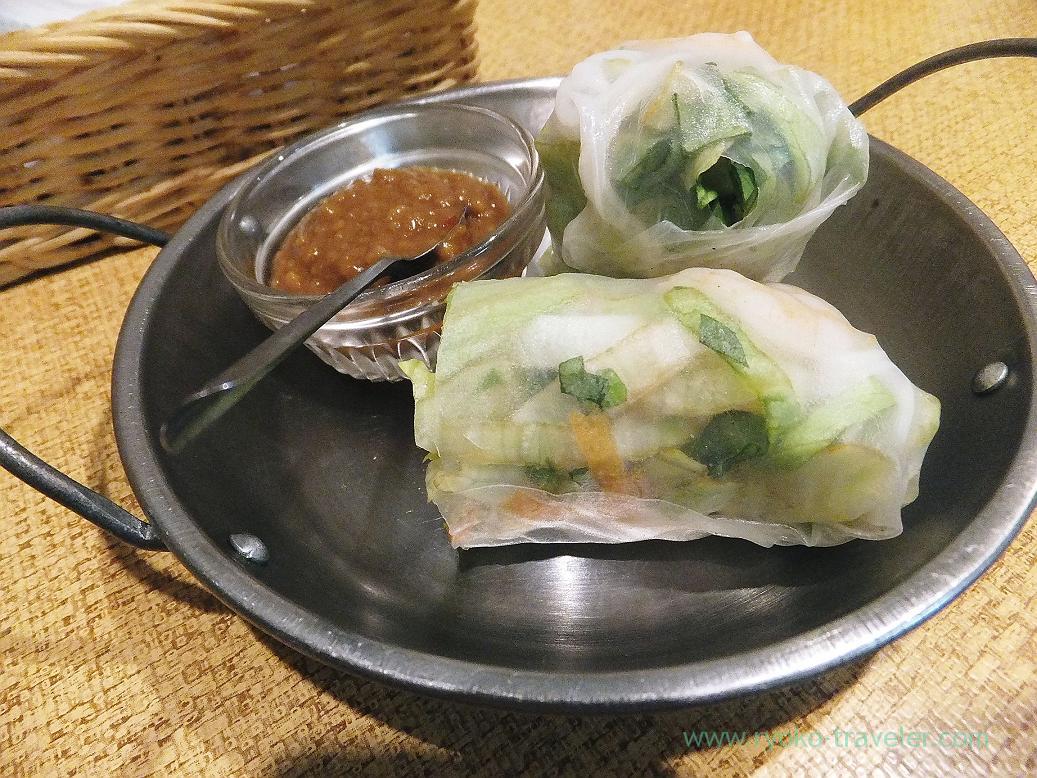 There were vegetables fully in it. Shrimps, too. Peanuts and miso sauce was not too sweet and it went with summer rolls well. 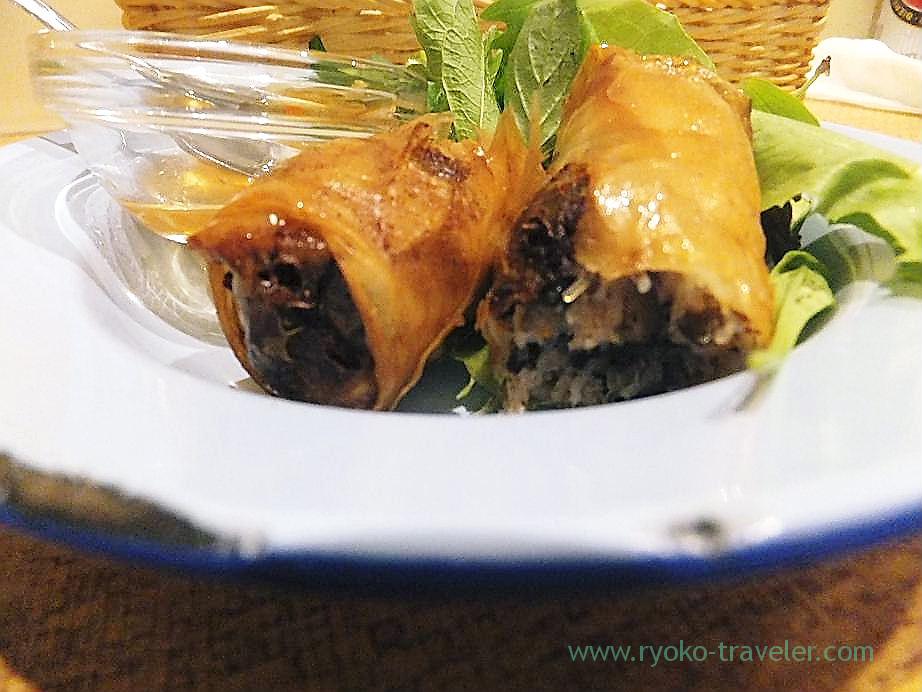 It had a crisp skin. Vegetables had strong smell 😛 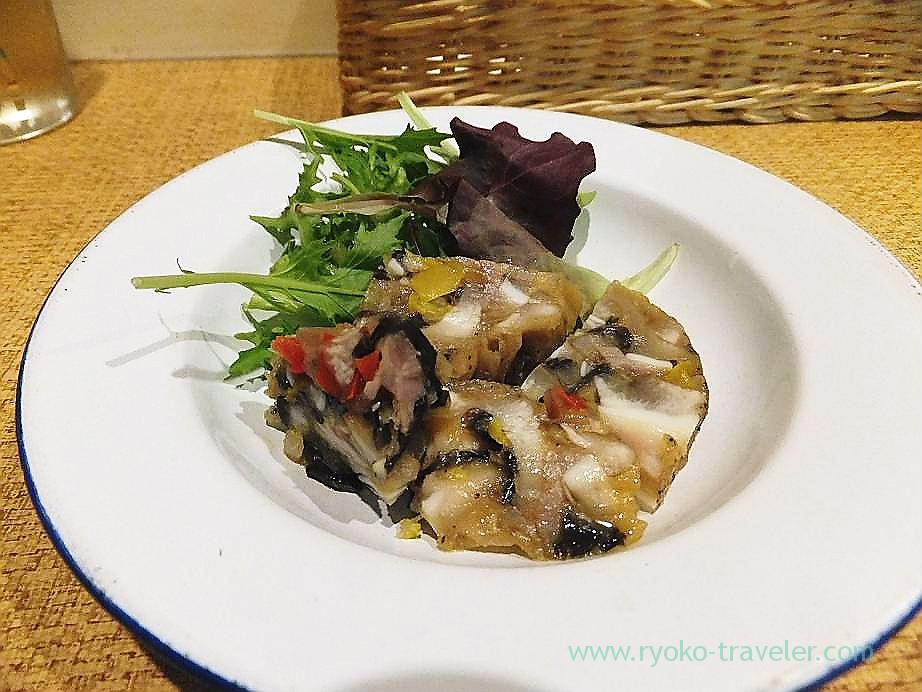 Pig’s ear had crunchy texture and good. But pig’s ear is associated with Okinawa cuisine. 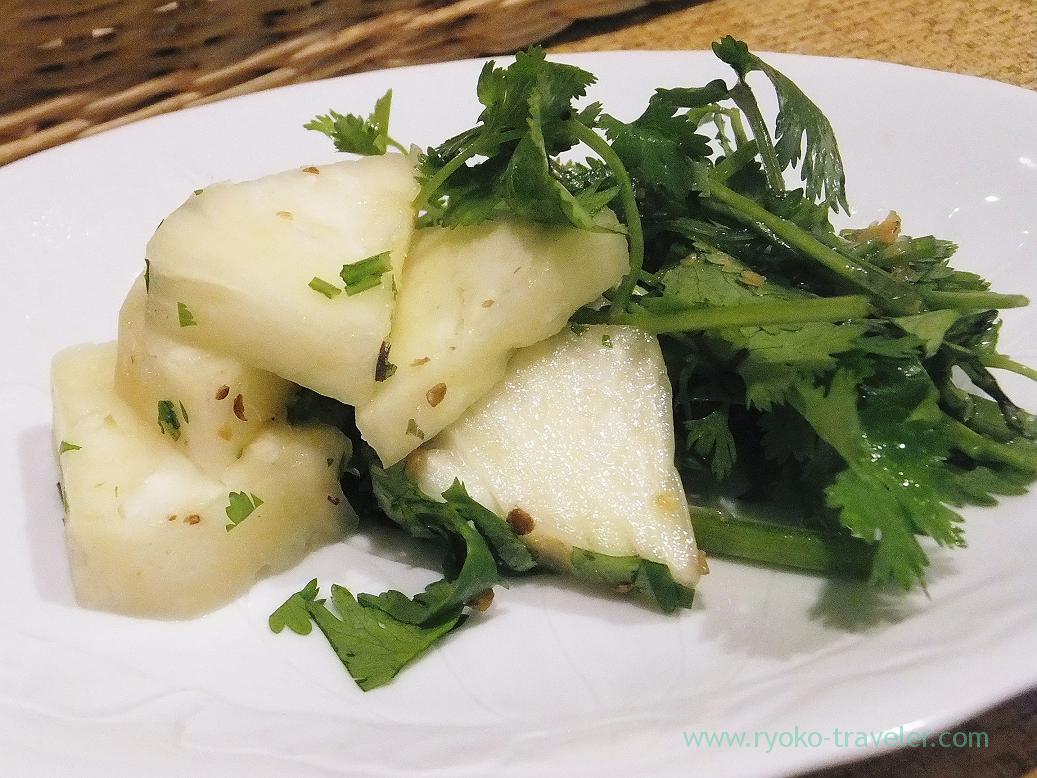 This was simple:D Pineapple was sweet 🙂 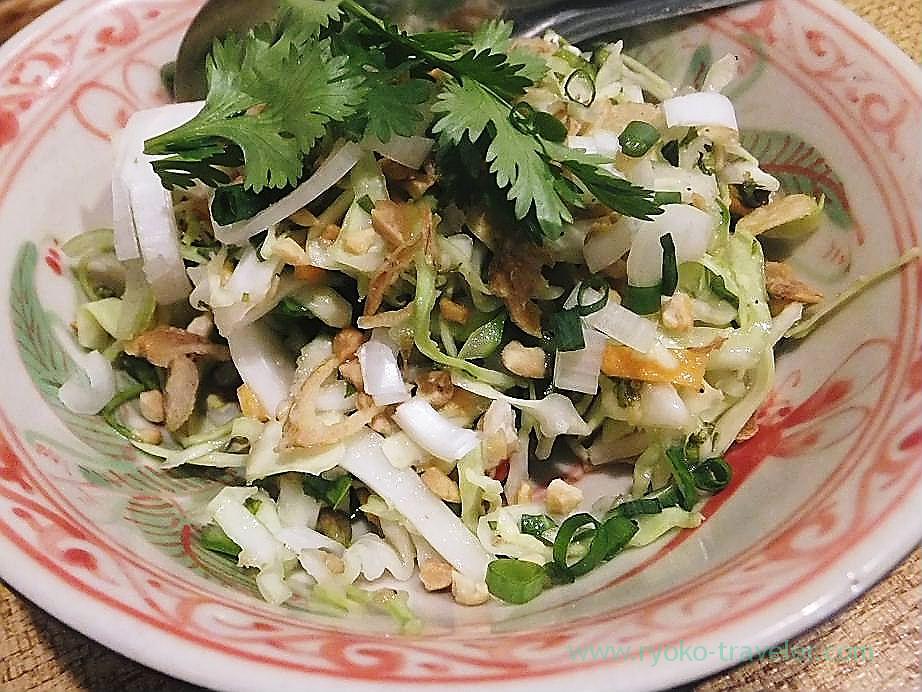 It looked like coleslaw 🙂 It was hot just a bit. 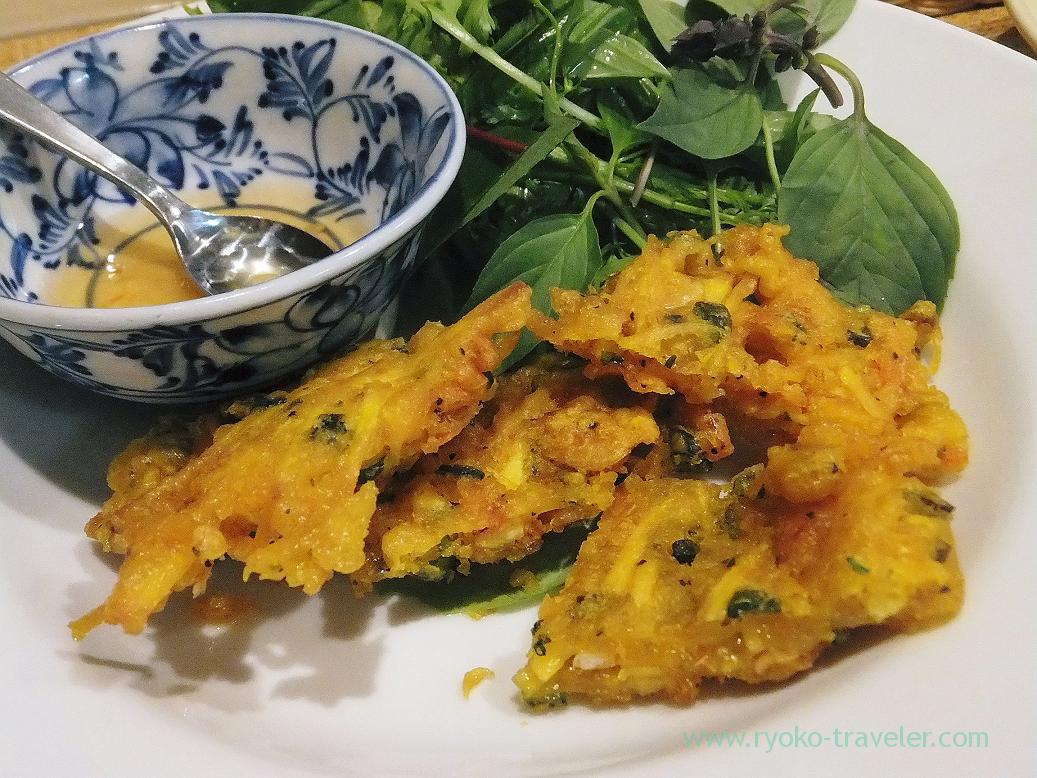 It was mild, but also it was spicy because of coriander. 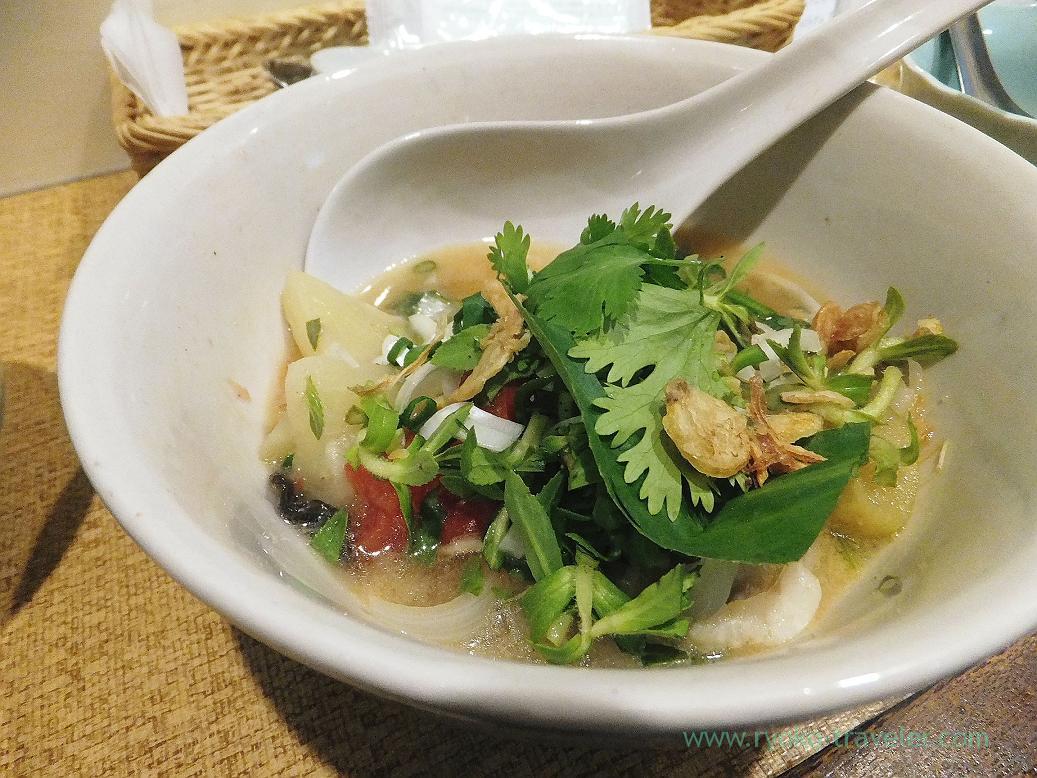 It had pineapple in it. It was sweet, but its sweetness was good in terms of the balance with coriandar. 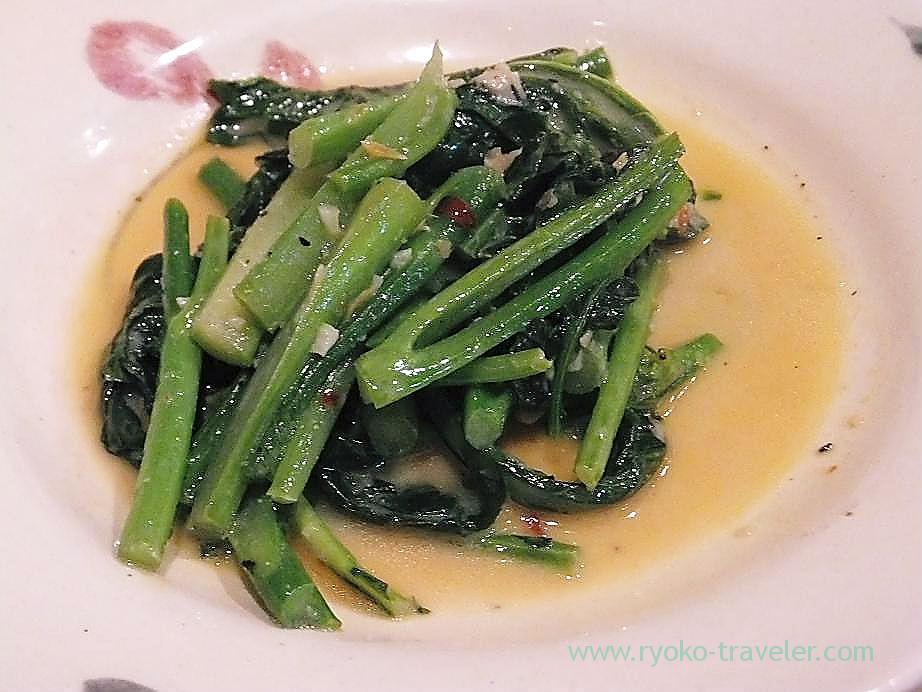 It choked me a bit. It was hot just a little. My throat was irritated by it.
But it was tasty none the less for its irritation.

Cha Ca (Catfish which is marinated, grilled on charcoal, and then fried in oil from Hanoi, チャー・カー)
Noodles. 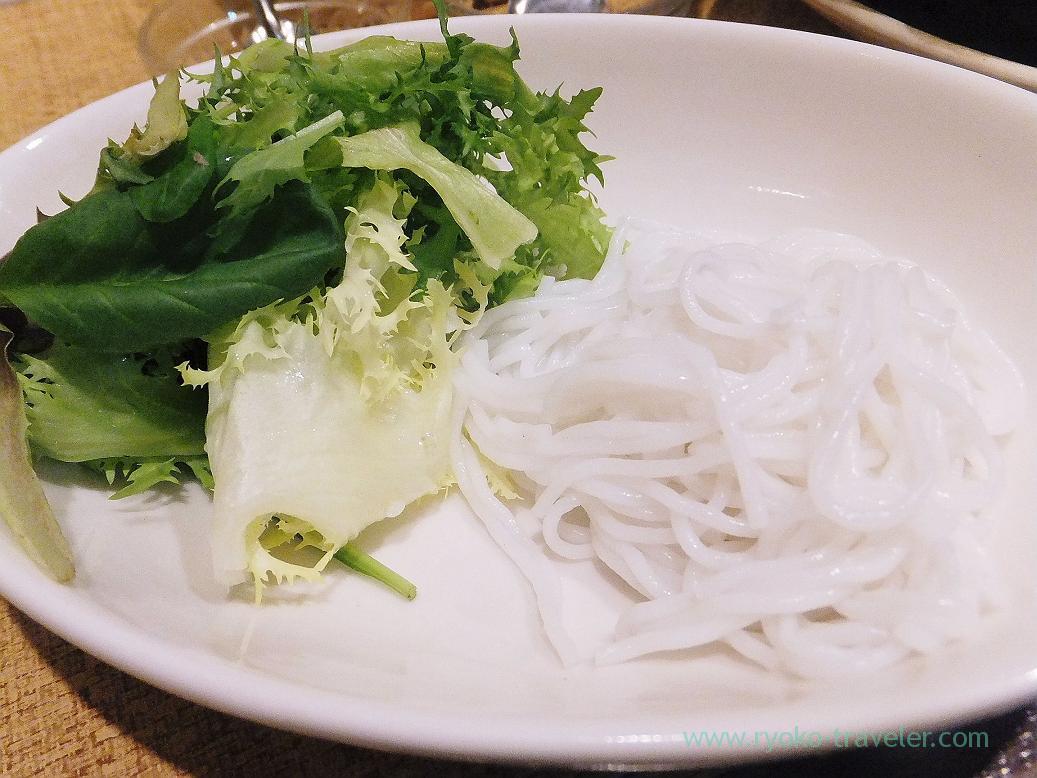 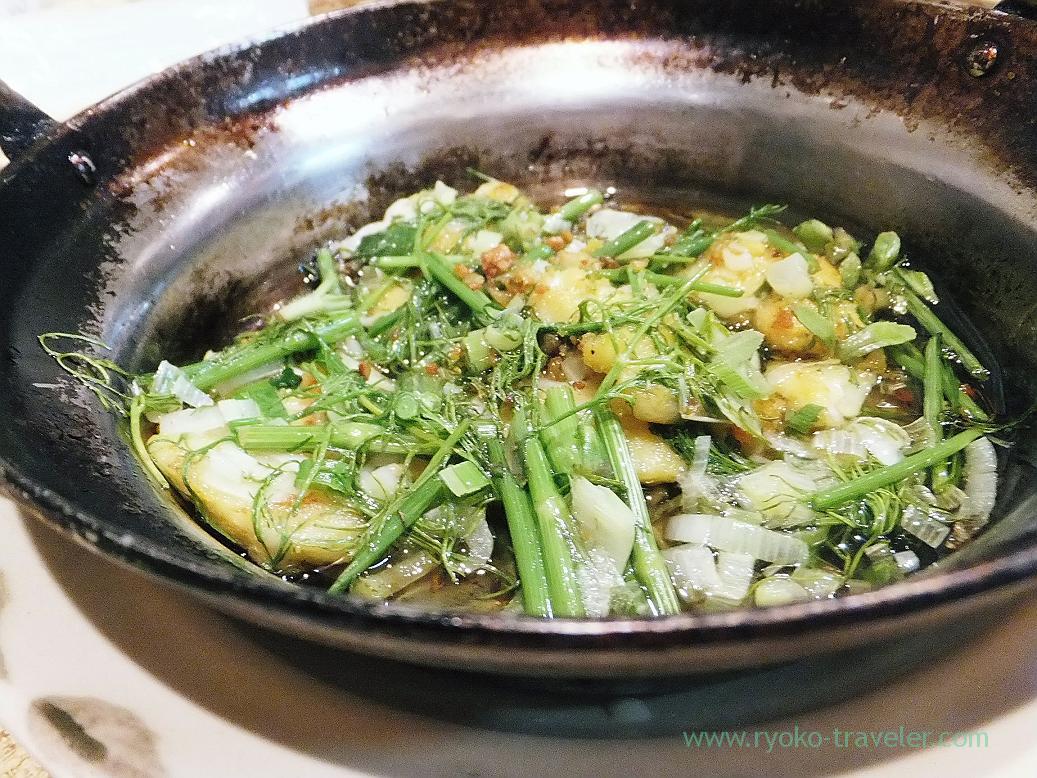 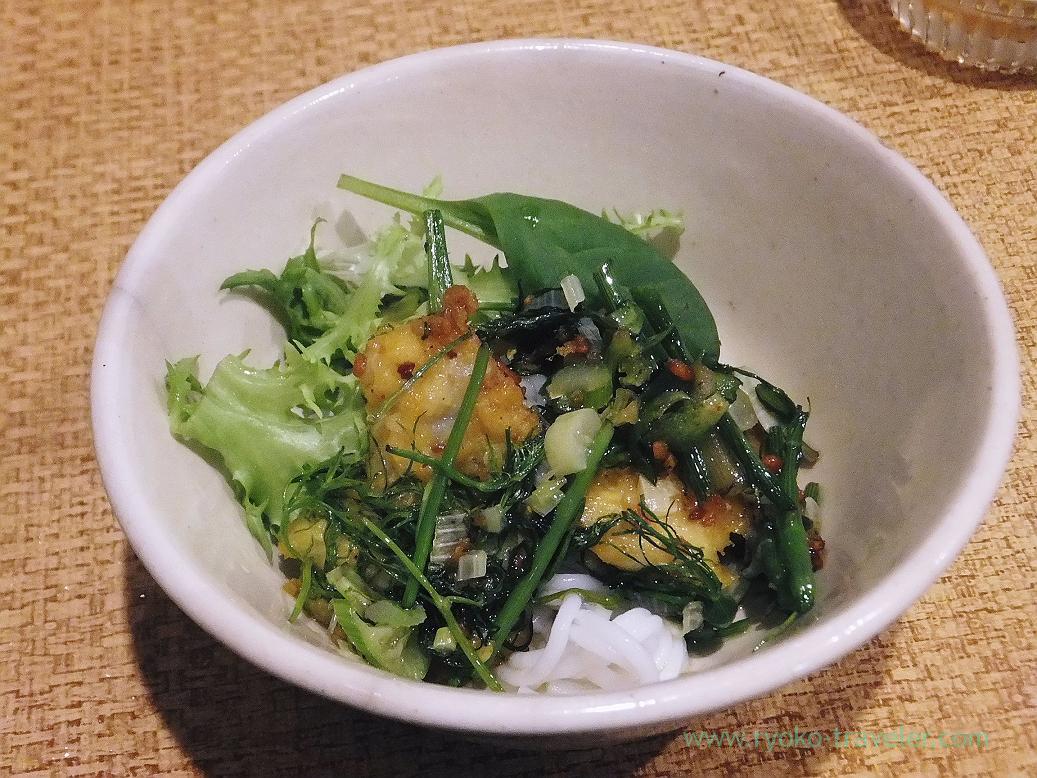 It had much oil, but noodles was light, so it was good 😀
I didn’t know what is catfish. But it was soft and thick.
I searched on the internet later and I found that catfish is “Namazu” in Japanese.
It is more pleasing to the ear than “Catfish” 🙁
I had eaten Namazu before I noticed it :O Of course, this was the first time to eat Namazu!
Still it was good 🙂 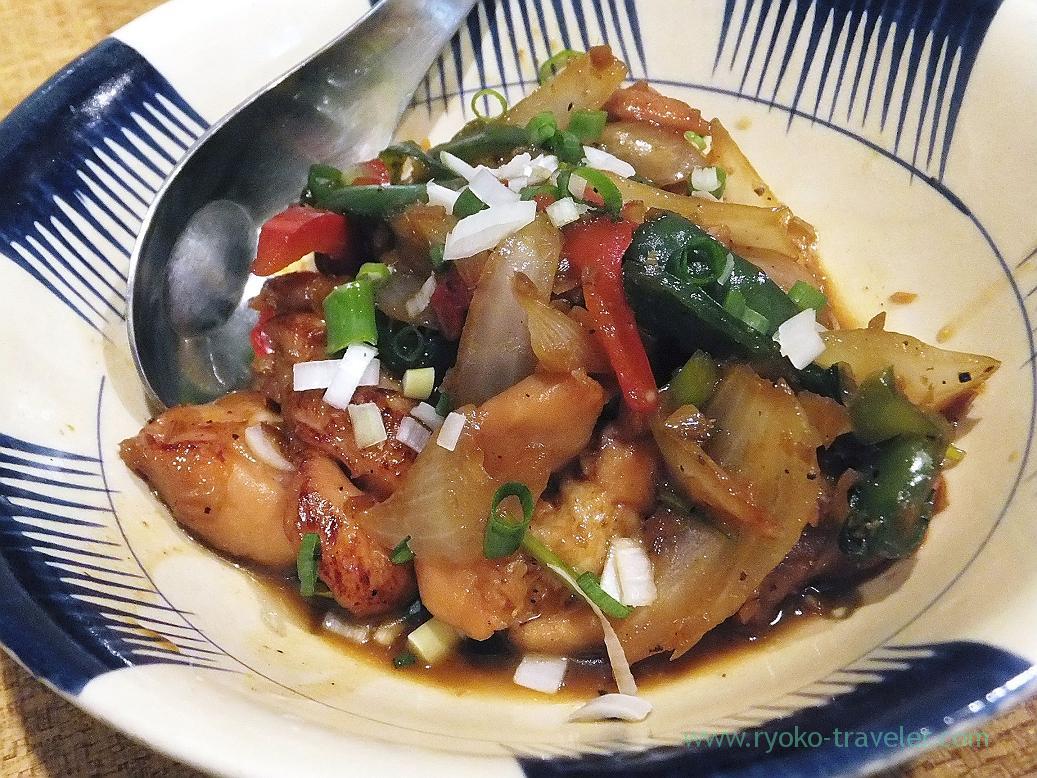 Chickens had springly texture 😀
I imagined it was spicy because of its name, but I didn’t feel spicy at all. 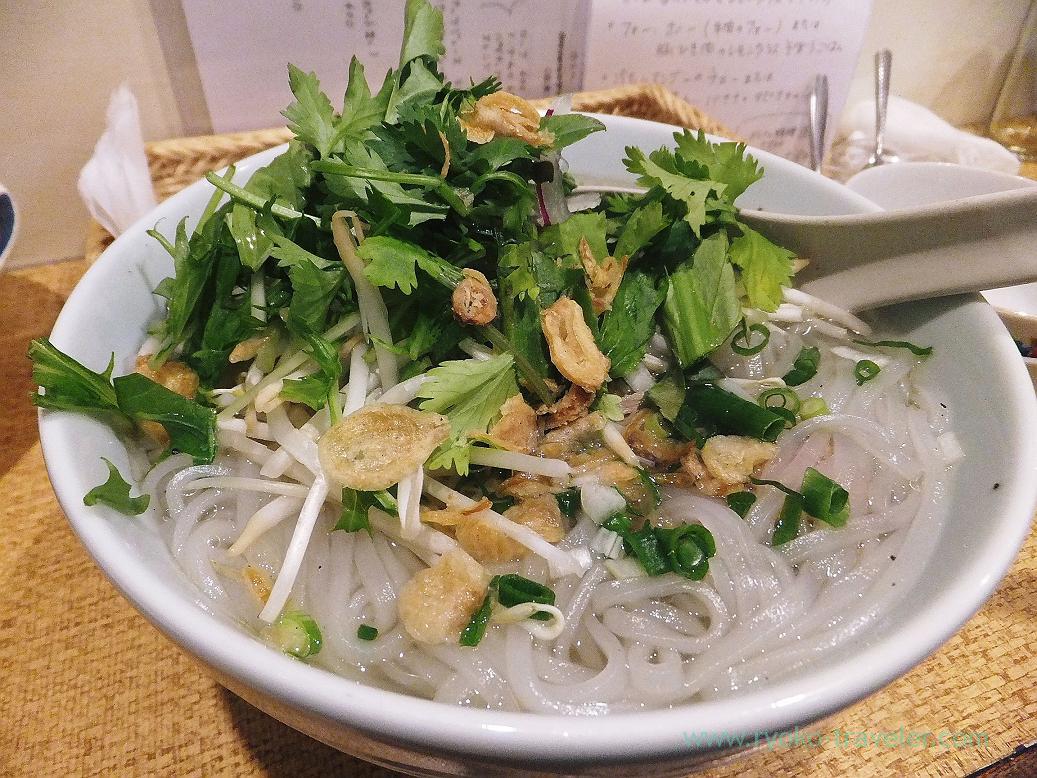 Why pho has such a attractive taste ? 😀
But it had little soup left 🙁
Probably pho noodles absorbed almost all soup 🙁

Minced meat with lemongrass on the rice (豚ひき肉のレモングラスそぼろごはん) 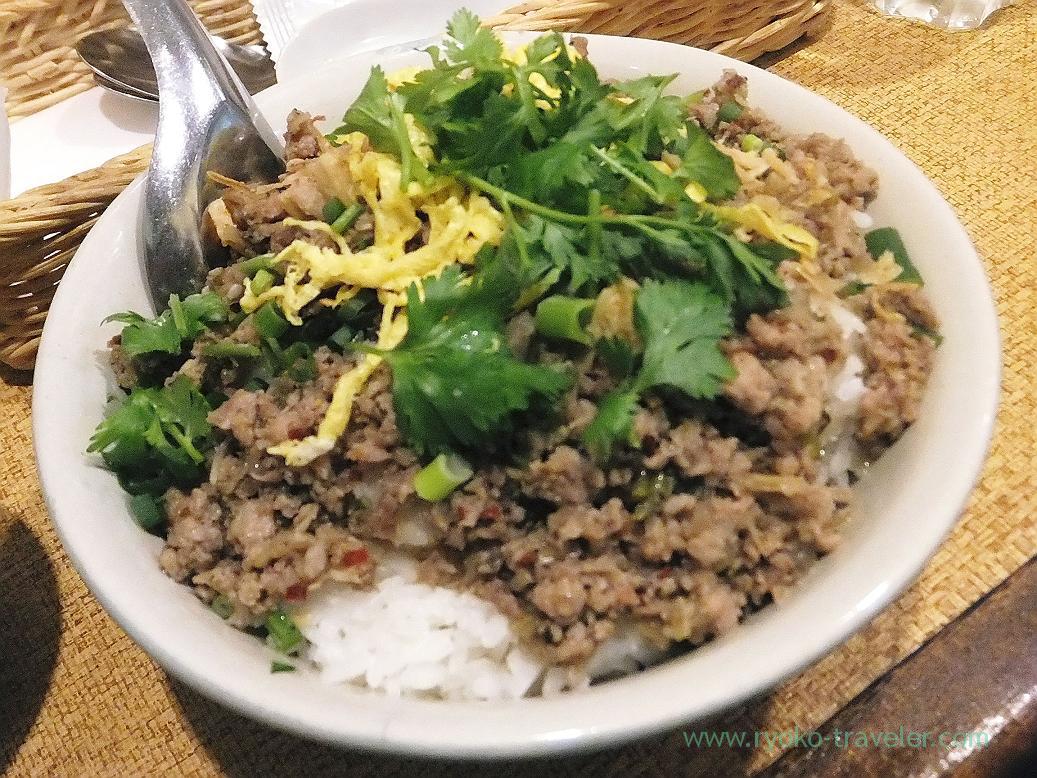 This was really good.
It was spicy and sour and smell of lemongrass.
Eating rice make me feel relax 🙂 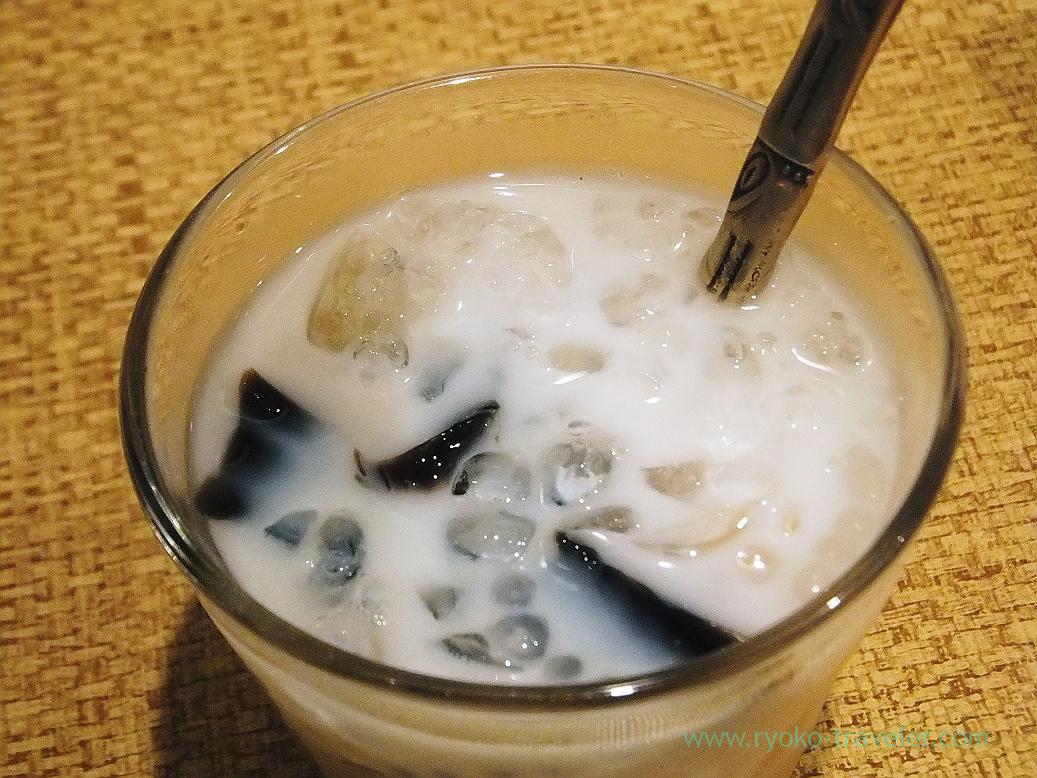 As dessert. I wanted to eat warm banana with tapioca pearls Che,too.
But everyone except me selected this cold one, so I decided to select it, too.
Mango was really good and after eating it, I felt very cool.

Asakusa underground street is really hot in this season. And the restaurant doesn’t have air-conditioner. Only an electric fan!

Suddenly I have felt good at my throat and nose. Thanks to typhoon !?
I had sufferd from pollen of dactylis glomerata very badly this year 🙁

Tsukiji Market is already closed. But you remember ? Tsukiji Outer Market is still alive. I recommend you visit there i...

The smell of tilefish and butter woke me up ! I woke up early in the morning for having breakfast at Yonehana, but my f...

My precious, delicious dinner and staffs of Spice cafe celebrated my birthday ! Yesterday was my birthday. So, but unf...

Breakfast at Yonehana keep my good health. Recently I visit Tsukiji for breakfast so frequently, and mostly I entered i...

At first, check the whiteboard hanging on the wall ! Recently I don't go Odayasu for breakfast frequently because I di...