Speaking of flowers in spring, I thought it is plum blossom and cherry blossom.
But I found that yellow flowers that is called wintersweet or Japanese allspice (ROUBAI in Japanese) is so pretty and popular flower on TV a few years ago.
The best time to see the flowers is before plum blossom start blooming. That is to say, from the beginning of January to early February. It seems winter, but those season is spring, of a calendar.

I had been wanting to see the flower since then, and my wish came true at last.
The flower that blooms so later than its normal flowering season.
I took a day off and went to Nagatoro all the way from Chiba. Of course, it’s one day trip.
There is a so famous winter sweet park on the top of Mt.Hodo, Nagatoro.

Mt.Hodo(san) is 497m tall in Nagatoro area of Chichibu in Saitama prefecture that is neighborhood of Chiba.
There’s a 15000 square meter wintersweet park at the top of Mt.Hodo. There’re about 3000 wintersweet trees within the park.
Also the view from the top is fine ! We can see lots of mountains and cities from there.

From Nagatoro Station, you get to the foot of the mountain for about one hour.
The station is small station. Cute 🙂 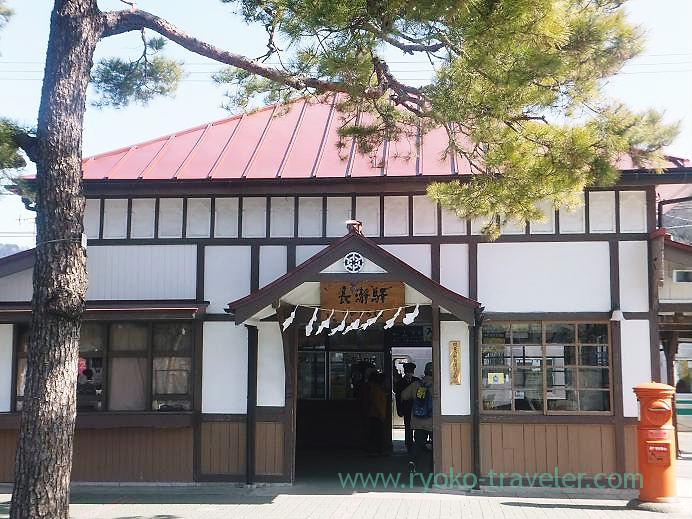 You can enjoy many activities and fun things like onsen, flowers, climbing mountains, river boating and so on. So, it’s one of the best place for day trip around Kanto region like Tokyo and Chiba.

Almost all mountains in Japan have shrines around the top because of mountain worship. Mt.Hodo have Hodo-san Jinja shrine.
It’s the Torii (outer gate) of the shrine. 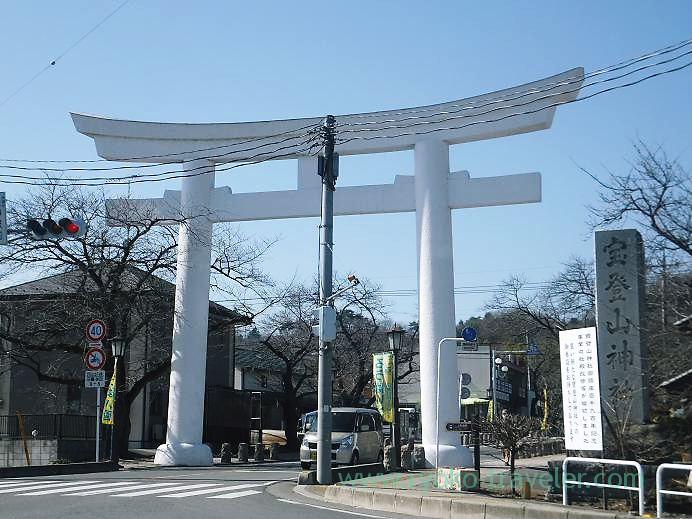 Though we can get to the top of the mountain on foot, we went to the top of Mt.Hodo by cable car. We didn’t have such a time. One day trip ! Fine view! 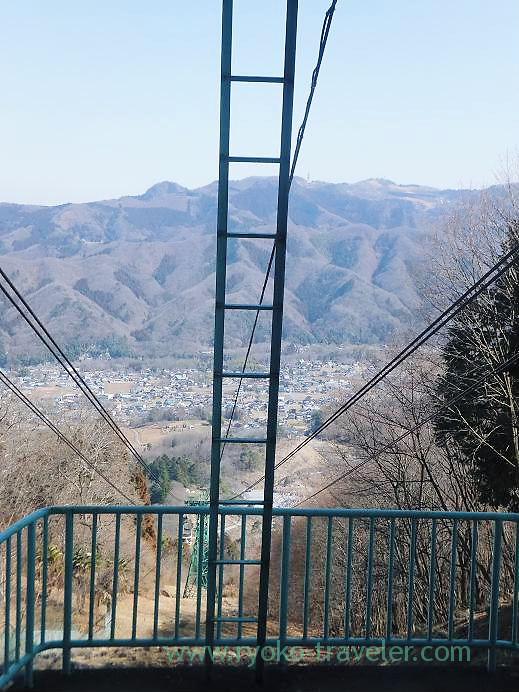 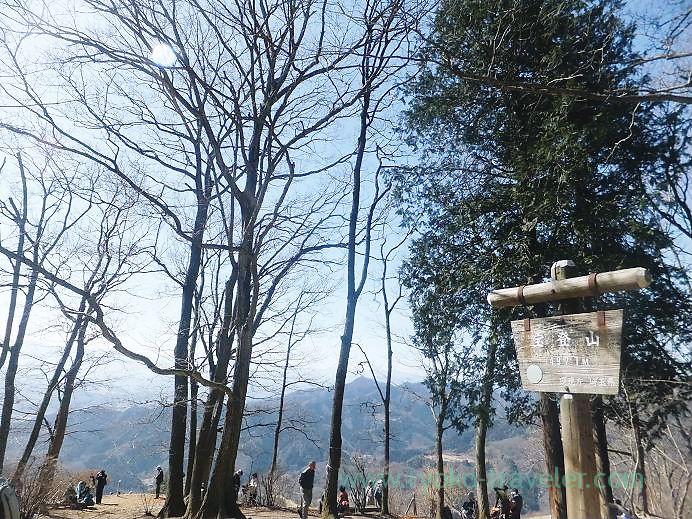 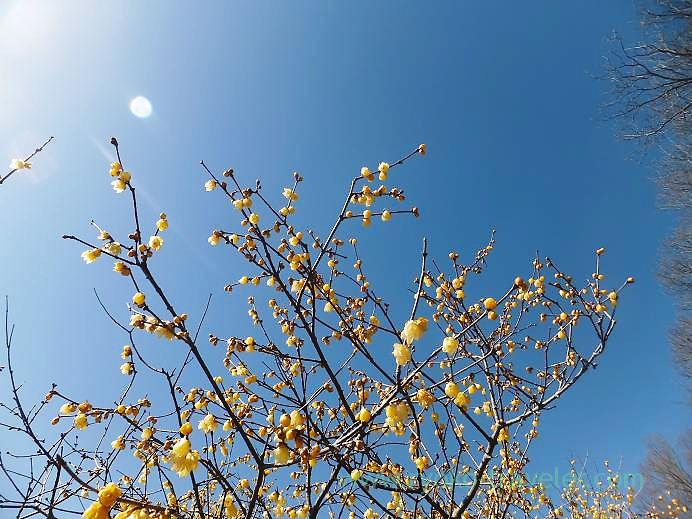 There were lots of people for seeing those flowers. Some people drew picture 🙂 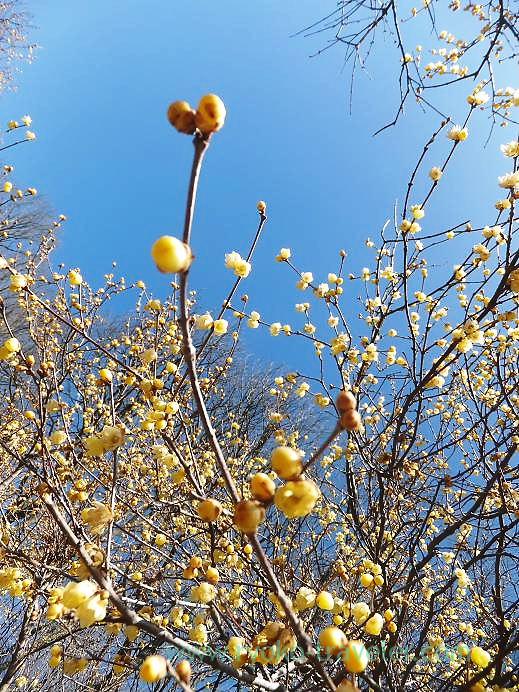 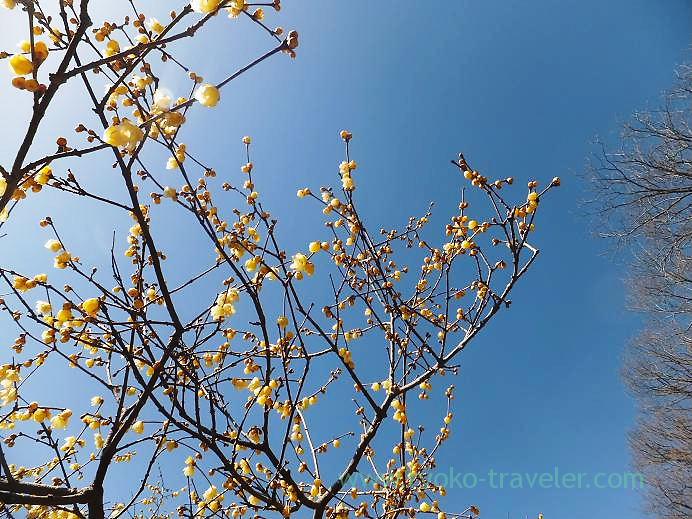 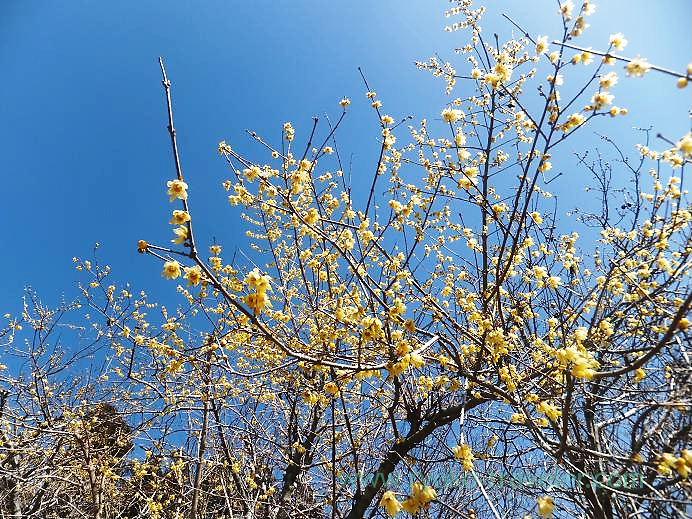 Because few flowers are in bloom in winter, this yellow flowers are the sign of the end of cold winter and spring coming.
Well, actually, cold weather still continue for a while :p

There was remaining snow yet. 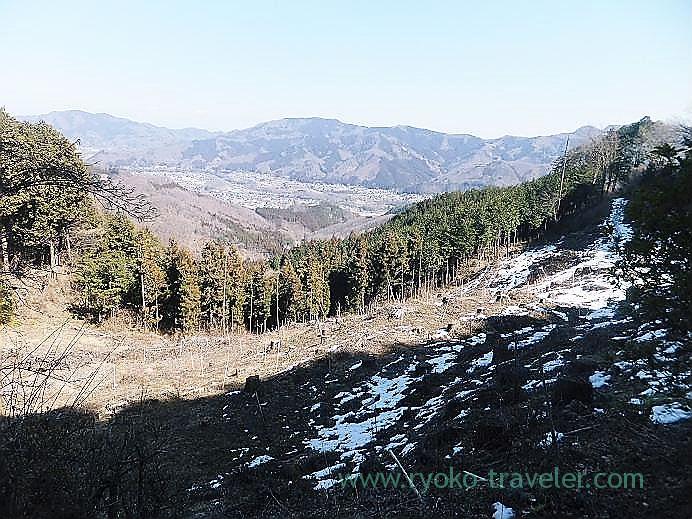 There’s a little zoo on the way to the top from the cable car stop, too. The zoo don’t have big animals. Lots of rabbits and monkeys are there.
Entering the mountain and flowers park is free of charge, but this zoo need admission fee.

There are rabbits, monkeys, deer, miniature pigs, raccoon dogs, goats and so on.
I like rabbits ! Every rabbit ran around the park so quickly except her. She never move. She looked happy under the sun 🙂 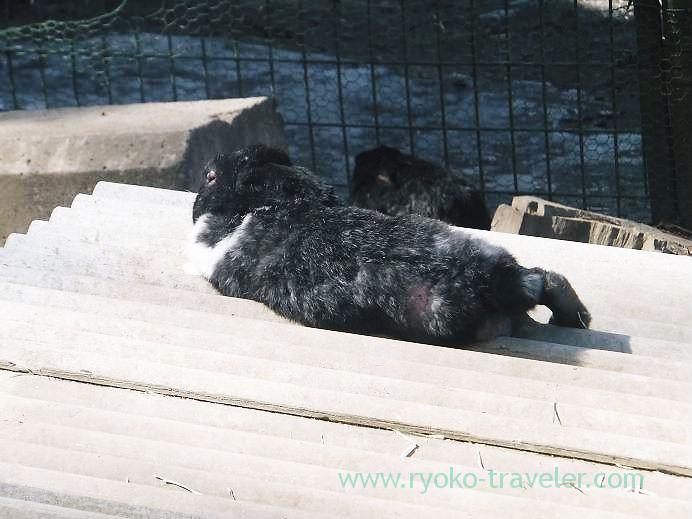 She is the cutest in the rabbit park 🙂 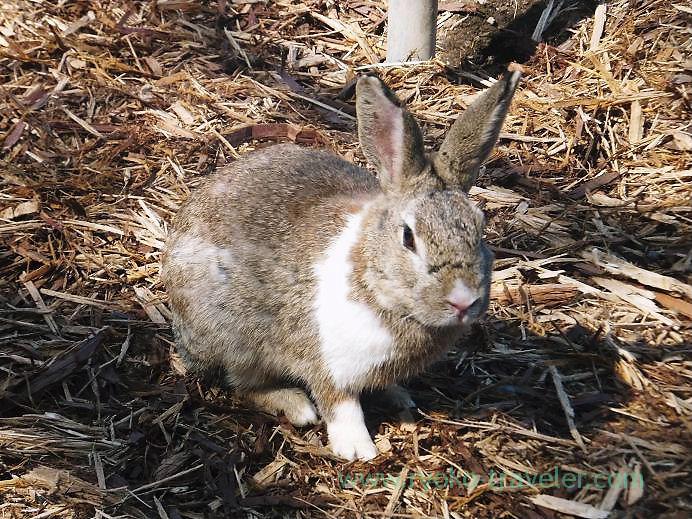 Her profile is cute, too. I was surprised that rabbits move so quickly. 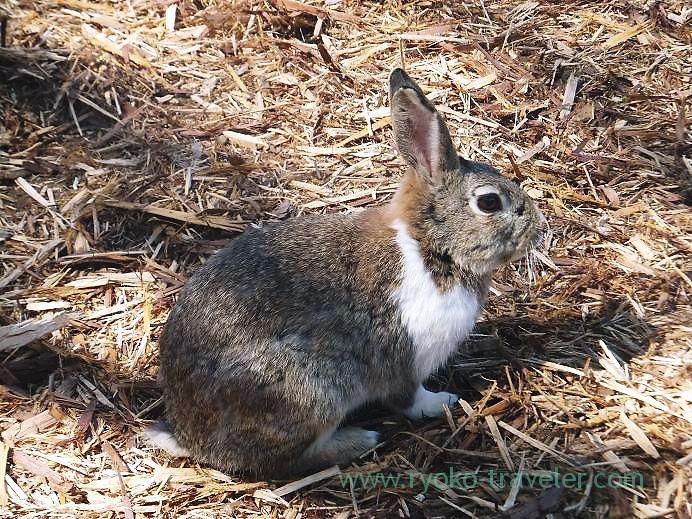 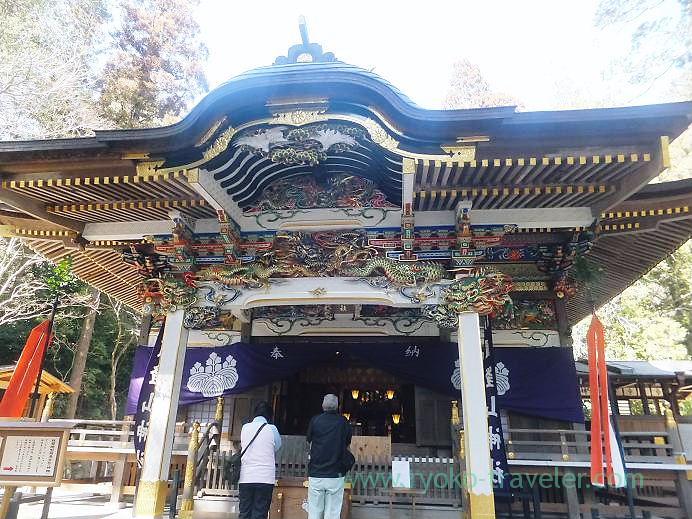 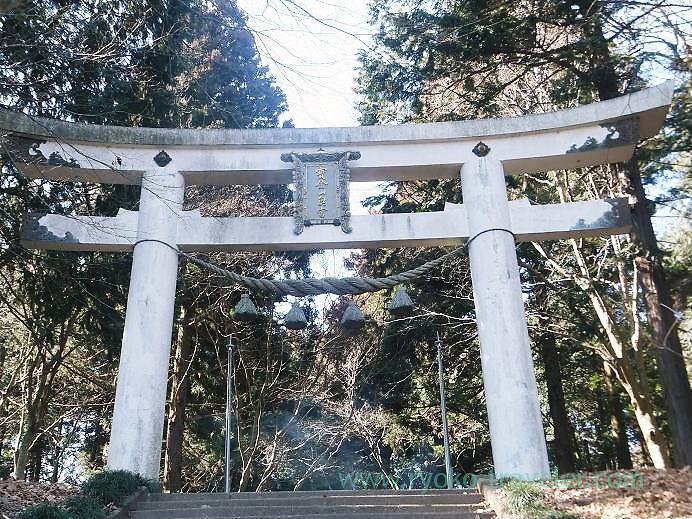 Not only wintersweets but also plum blossoms and cherry blossoms are bloom around this Mt.Hodo area.
So, lots of people visit Mt.Hodo to see beautiful flowers from the middle of January to April.

Plum blossoms are going to bloom, too. 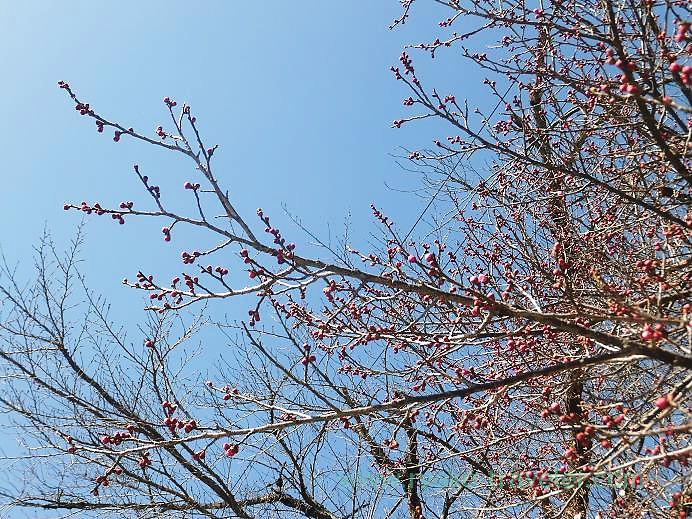 Here, some blossoms were in bloom 🙂 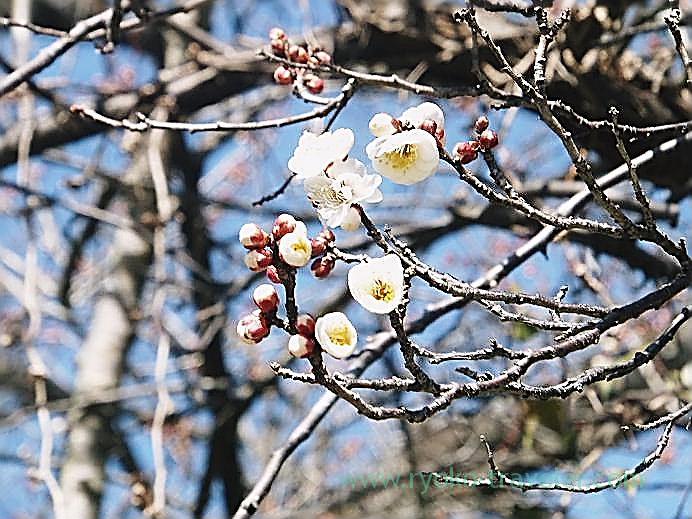 By the way, wintersweet is called “蝋梅 (Roubai)” in Japanese, it have the word “梅” that means plum, so lots of people think winter sweet is one kind of plum. I thought, too. But it isn’t true.

There’s a very popular kakigori shop that is named “Asami Reizo (阿佐美冷蔵)”on the way to the foot of Mt.Hodo from Nagatoro station. But to our disappointed, it was closed during winter until end of March !

But there’s a shop that serves kakigori that is used ice from Asami Reizo close to the station. Asami Reizo is famous as natural ice.
But I think it was not natural ice.The ice wasn’t tasty and it was hard. And there was no words “natural ice” on the menu.  Natural ice melt in mouth quickly. 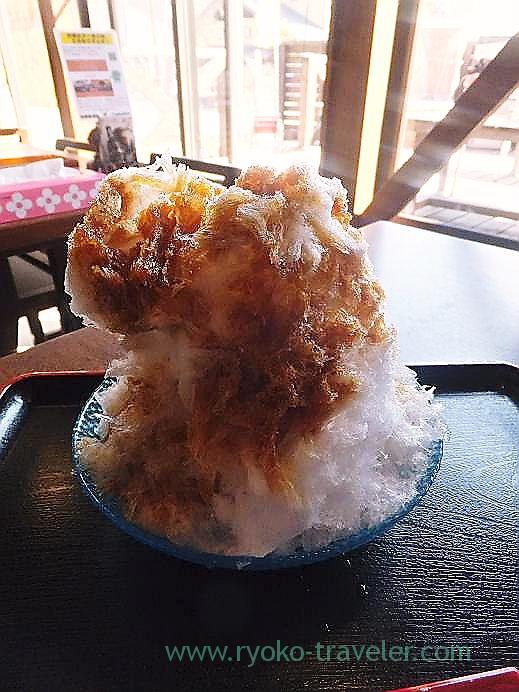 Of course I was satisfied with the flowers, but I think I shouldn’t go and return in the day.
I want to Nagatoro by one-night trip next time.

Over two hours trip (one way) for Indian dinner. I told that there is a fish that named cherry anthias. It is caught in...

Beautifully colored temple by hydrangeas. I took my mother to Kamakura for viewing hydrangeas last week. We visited t...

Though their name have "Misaki harbor", they have nothing to do with Misaki harbor. We dropped in at Kaisen Misakiko fo...

Gelato shop in sea town This is a continuation of an article about Kanagawa eating tour. After finished eating k...

Last, we went to there. Anki is very popular as rice gruel. Entrails (モツ皿). I hadn't eaten honeycomb tripe b...

When I visited Kamakura, I had lunch at OXYMORON located within 10 minutes walk from Kamakura station. When we got to t...
Inner Beauty : SINOADORE, Shiseido
Hongo-Sanchome : Miso-nikomi udon at Misonikomin