龍袍湯包 means “Dumpling as same quality as dumpling that is served for emperor”.

Though yellow and big signboard outside was outstanding, but its inside is not large. But it’s clean and nice.

The pleasant lady speak Japanese a bit.
And also the menus have Japanese words !
There’s a paper cup and tea pot on each table.

Foods are rather expensive. As you see, the soup dumplings have expensive ingredients !
And another they have many foods on the menus !

This is Steamed mullet roe and pork dumplings (魚子湯包, 5pcs 250 TWD)
You can find something yellow thing on the top of the dumpling ? Yes. It’s mullet roe.

Much mullet roe in it. Delicious. Because Kaohsiung is port town, they are proud of seafood. Mullet roe is one of their specialty. 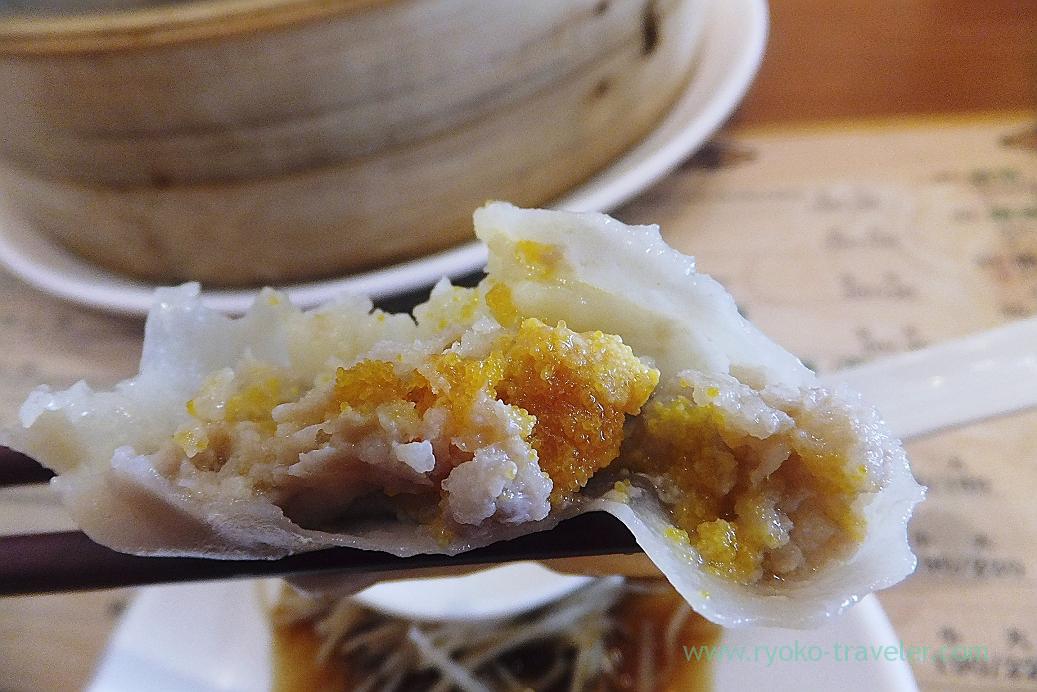 Hot and sour soup (酸辣湯, 90 TWD) had much ingredients. For example, bamboo shoot, carrot, mushrooms, tofu and so on. Nutritious. It had mild sourness and not too spicy. I felt full with the soup dumpling and soup. Also they have hot and sour soup noodles.

Certainly, they are rather expensive compared with another restaurant in Kaohsiung. But I think it’s worth to visit and eat.

[Taipei] Pinapple cake at THE NINE in The Okura Prestige (大倉久和大飯店)

Pineapple cake is the most popular souvenir of Taiwan. So many shops in Taiwan sell pineapple cake. The Okura Prestige ...

New bus terminal in front of east gate of Taipei station. I visited Taipei from November 12 to 14. I knew that the p...

Bingzan (冰讃) is awesome. Their mango xue hua bing is far the best shaved ice with mango in Taiwan for me. They are loca...

Venice in Taipei. Thanks to delicious shaved ice, I recovered from the pain of my foot. So I decided to go to Tamsui...

Taipei is a heaven of fruits. They have delicious fresh fruits and everything is inexpensive.There's a good fresh juice...
Funabashi : Spicy sesami ramen at Asyura (拉麺 阿修羅)
Kaohsiung 2015 : Tuntex Sky Tower 85 ! (高雄85大樓)