Komeda coffee that have cafes chains and head office in Nagoya got so popular before I knew. And there’re already lots of branches here in Japan. Finally, my neighboring station, Tsudanuma, too !

The parking lot is wide, and it looks like rest area on highway.

For getting the size of the parking lot, it is a little far from the station. Well, from 10 to 15 minutes walk.

This horizontally-long signboard in the parking lot is guide 🙂

Its apperance seems to be hut.

Especially, the parking lot is full on weekends, and also so large number of bicyces are parked. We have to wait more 20 minutes to take our seats.
And so many families are there.  It looks like an amusument area.

Why this cafe so popular is because their foods are large.

Drink have one snack of beans. This snack can be bought at the cashier. They sells coffee beans, too.

Apart from cafe au lait, there is “iced milk and coffee (アイスミルクコーヒー, 440 yen)” on the menu, so I ordered it.
It didn’t have much coffee taste. Its taste was like “milmake” (I’m afraid you don’t know its name. It is seasoning for milk. I used to be served it at school lunch in my school days)

Large soft ice cream is on the hot big danish. Though it was tasty, but it was too large for me. It is for two person. There is half size of shiro-noir for one person 🙂
Ah, my friend said that she and her friends ate it one each by theirselves after the banquet… Incredible…. I never can eat it up by myself.

The origin of the name “Shiro-noir” is the Japanese word ‘Shiro’ that means “White” in English plus “noir” that means “Black” in French.
So it means “White soft ice cream and black danish” though the denish isn’t black, strictly speaking … 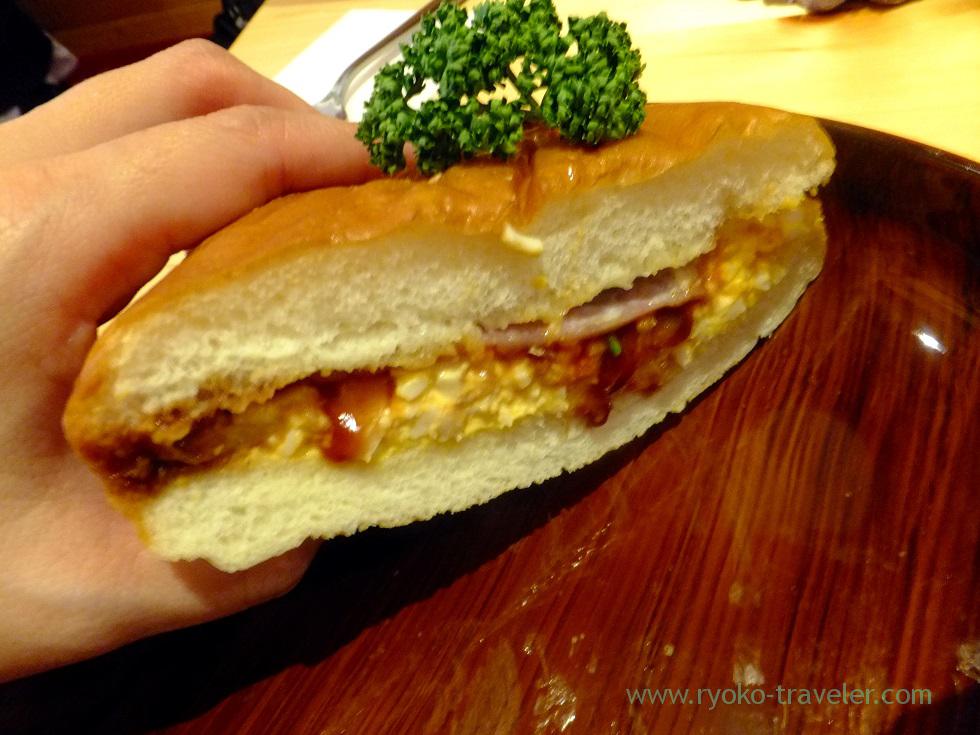 This sauce have strong taste and have plenty of eggs. This food is cut in half.
So, one more this was on the tray. (We already ate that before taking this picture)

Those foods are not bad in the taste, but those large portion and the feeling of satisfaction is the reason of their popularity.

After a couple of days later, we visited there again at night. There were much vacant tables than I had thought.
So you’d be better to go at night if you want to have time in the cafe comfortably. At daytime, it is very noisy.

Awesome ramen shop came back ! Finally, Tomo-no-moto near Higashi-Nakayama station is reopen :) The manager (chef) re...

Cafe like jewerly box Strawberry season will be end soon. Now we can get strawberries at the lowest price throughout...

I told befoe, I ate soba that didn't have my taste. But the soba restaurant served my delight soba. That restaurant is...
Tsukiji : Four season have new menus (フォーシーズン)
Tsukiji : First bonito at Hajime Sengyo-ten (はじめ鮮魚店)