We heard that there is a restaurant that serving branded meats tonkatsu like black Iberian pig near Kanamachi station 🙂
Kanamachi is in the area of height above the sea level zero. I can’t swim at all, so everytime I went to Kanamachi, I get antsy…

The restaurant name is Katsu (喝) The character looks cool on the woody plate.

Why the they such a thing is because The word “Job hunting” in Japanese contains the word “katsu”
But I’m afraid persons who don’t get their job until the summer will be angry at the notice…. 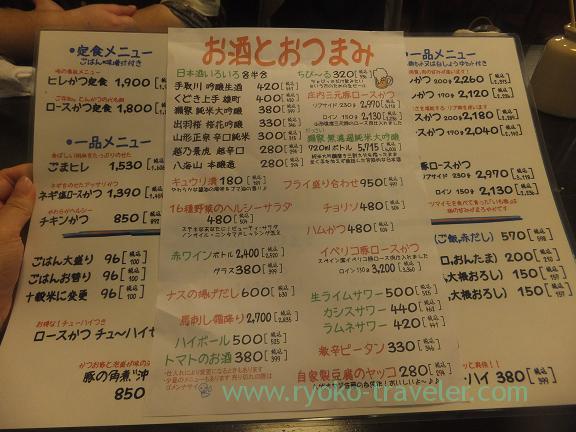 But to our great, great regret, they didn’t have black Iberian pig !
And another, the restaurant serve some branded pork meats, but almost all branded pork meats wasn’t there. (>_<)
There was only one portion of loin of Sangenton pork tonkatsu. Of course, we got it.

We disappointed, but we pulled ourself together and the tonkatsu party started.

The vegetables weren’t fresh. But the dressing was good 🙂

Well, the same food was on the appetizer plate. But we needed such a refreshing taste for much tonkatsu.

As its name, it was so hot. But why century egg at tonkatsu restaurant ? 😛

*White soy sauce set (白醤油セット) 157 yen.
It is for tonkatsu. Dipping tonkatsu into the sauce. But I felt this restaurant’s tonkatsu go rather with worcester sauce 😀 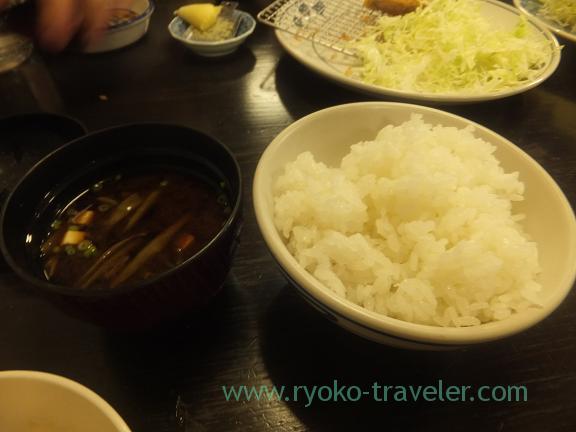 Too much rice for me ! Everyone except me ate up with easily,,, oh, great.

But I like Special fillet tonkatsu best. Next, Sangenton pork tonkatsu.

I took all kinds of tonkatsu picture, but every pictures looked same, so I uploaded only this picture.

Instead of that, here’s section of tonkatsu 🙂

Misokatsu is one of specialty of Nagoya. Mitokatsu is tonkatsu with red miso sauce. Yabaton have a head shop in Nagoya and we can have real tastes of misokatsu at the center of Ginza.

May 11th at Tenfusa My friend asked me to go Tenfusa with them the other day :) They were fine nevertheless it was sti...

I felt value of Ginza at Tsukiji I feel like eating cold soba because it's still hot in the daytime. Especially, concr...

Cold as it is, going out for lunch Usually I take a homemade lunch to my office on workday. There are no good restau...