First dinner of my Hawaiian time at  3660 on the rise in Kaimuki.
I asked the restaurant if I could have reservation by mail by myself, they readity accepted.
Many people say on the internet that guest can go there with casual wear. But it is said that guest should be there in semi-formal wear on the guidebook.
I had no idea what I should wear, so, I decided to go there in a muumuu that is formal wear in Hawaii. 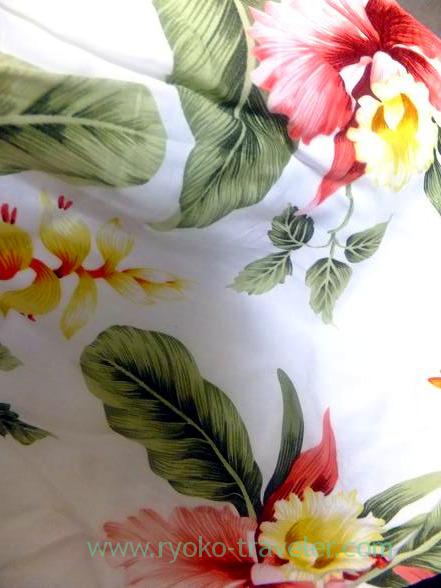 It looks like an exclusive restaurant… I was a little nervous before getting into the restaurant. At first, Hawaiian beer. Longboard beer. It was light taste beer. Even I rarely drink beer, the beer was easy to drink 😉 I expected that every dishes in the course is smaller than regular menus and I ordered a course ($54).

Bread. Taro bread. The red color was good. Because of taro or not, the bread was springy and springy. At first, Ahi katsu was served X(
It seemed it was regular size…

But I was glad at that time. Why I wanted to go to the restaurant was because I wanted to eat it !!!! I could eat much slices of ahi katsu  !!! It was really good as I expected !

However, I already felt almost full when I finished eating ahi katsu… Still my entree came soon. My entree was… When I saw it first, I regretted so much. Toooooo big for me X( !!!
And plenty of slices of onions being fried deeply on the meat !!!Ahhh…
I should order fish….

Most beefmeats eaten in Japan are fatty and soft, but the beefmeat was chewy and it had strong taste of meat. it was beef meat among beef meats 🙂 It tasted really good.
But…. I said now it was chewy. So, I had to chew very well. I felt full earlier than usual.
Sorry, I left about 2/3 amounts of it. Well, I hated to leave it and went back, I took it to my hotel with me. The leftover became my breakfast next morning.
Though there was no microwave oven in my hotel, I enjoyed eating them next morning. It didn’t become hard. Truthfully speaking, the ice cream and cake is originally together on the dish. The cook had good sense to dish them up separately for taking them out.
The chocolate cake had so rich taste of chocolate !!! Alas ! I wish I had bigger stomach !!!!!
I managed to eat up the ice cream, and ate the cake just a bit. Also I took the leftover cake to my hotel.

I saw the elderly couple next to me shared two dishes happily, I regretted from my heart that I ordered such an amount of foods !

The waiters could speak Japanese a bit, and the best thing was they were very comfortable and friendly 🙂
I had very happy time at there except mistook the amount of my foods … 😛

After that I went back to my hotel by trolley bus. It was windy and I was anxious about the strong wind.
Because I sometimes have trouble breathing because of strong wind.
When I traveled to Uzbekistan, my medicine caused my difficulty in breathing in high wind.Since then I felt anxious about the strong wind.
How do I overcome it ? Anyway, because of that, my trip to Hawaii was sometime hard for me to move.
If I used THE BUS, there was no need to worry about that, though.