Notice : They moved. They are back to Setagaya area and now reservation is required at all time.

Shop information at the bottom is current information.
(July 16, 2018)

Recently, I’m starving for spicy foods because it is so muggy everyday.
I always say “I need spice !!!” So, my friend took me to Kanda to eat mapo tofu 🙂

The restaurant’s name is “Goshizan”.
I know Goshizan (Mt.Goshi) is a name of well-known mountain in China.

This signboard is really outstanding. No one must have missed this signboard.
They moved from Setagaya area in Tokyo that is so popular as high class residential area. Goshizan is not large restaurant. They have counter seats and some tables only. You’d better reserve in advance if you visit there. But they don’t accept reservation at lunchtime.

Goshizan is located in kanda area and very close from Kanda station.

In addition to paper menus, they have blackboard menu. Each name is written in Chinese, and explanation is besides in Japanese. 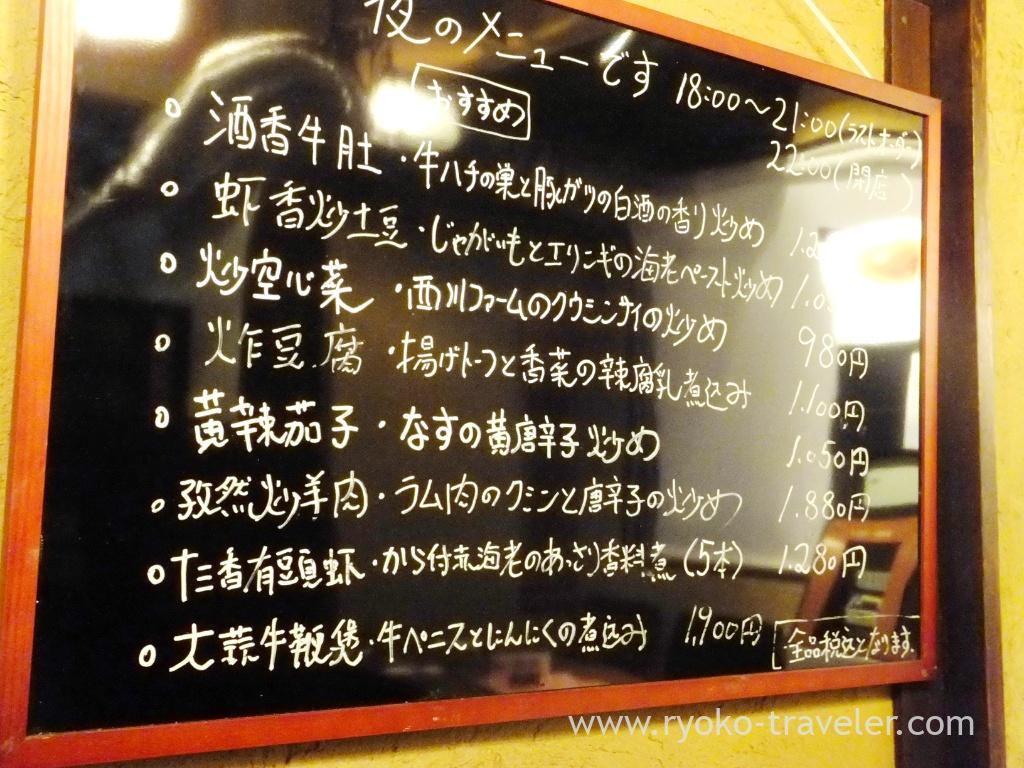 And some staff is Chinese. So, Chinese people will enjoy at this shop without Japanese language.

We were two and thought that about 3 dishes are good for two person. So, we chose three dishes.
They serve more original dishes based on Chinese foods and another Asian elements than ordinary Chinese foods. But the pigs’ guts was soft and tasty. We enjoyed it. So… We got drink :p Mapo tofu and rice in an earthenware pot (麻婆土鍋ごはん, 1080 yen)
This is MUST food when you visit there.
So much sichuan pepper on it !!! It was really tasty.
Though I had lost appetite, I voracity ate it. My appetite completely recovered. Some people came here alone and order one this mapo tofu bowl only. But one portion seems to be much for one person.

We managed to eat them up. Amount of each dishes are large. So, we decided to visit there again with friends.

So… we visited there again a few weeks later. We were four that day. When we two visited there previous time, we thought each dishes are good for four person 🙂

At first, we need something to drink for hydration before the fight 😛
My drink was litchi liqueur with soda (ライチ酒のソーダ割り, 600 yen). 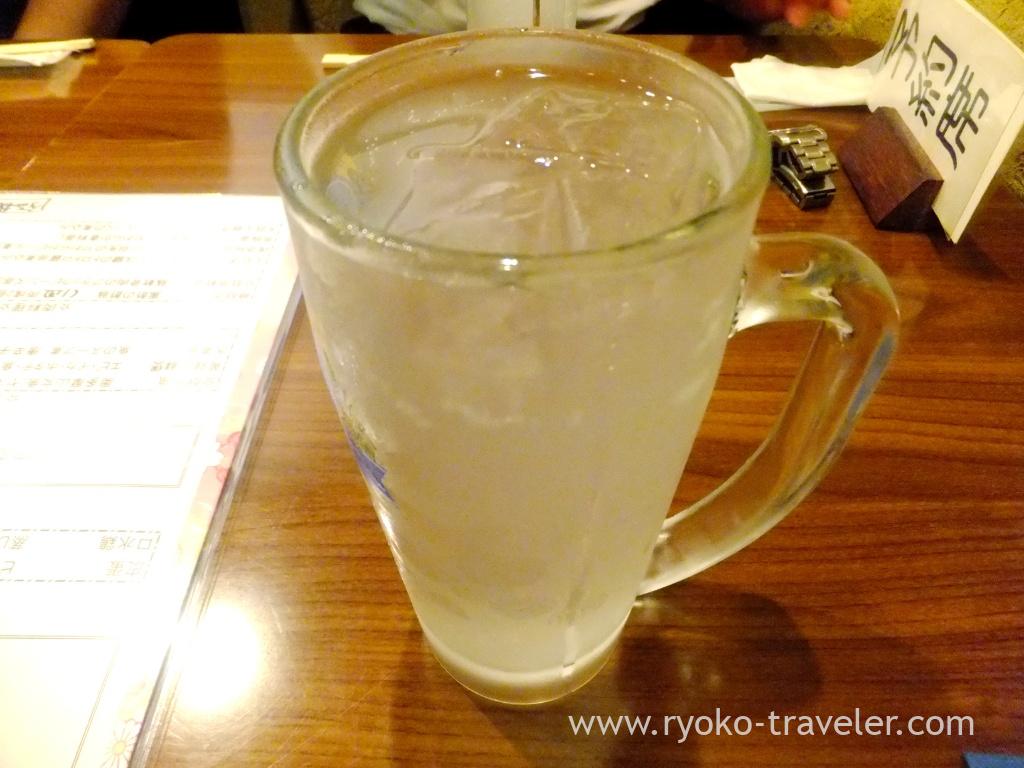 steamed chicken with spicy sesame sauce (蒸し鶏のピリ辛ごまだれ, 980 yen)
It was served as cold. It looks very spicy, but it wasn’t so spicy because of much sesame. And red oil is not too spicy.
Still, so much amount …. Even four of us was overwhelmed…. 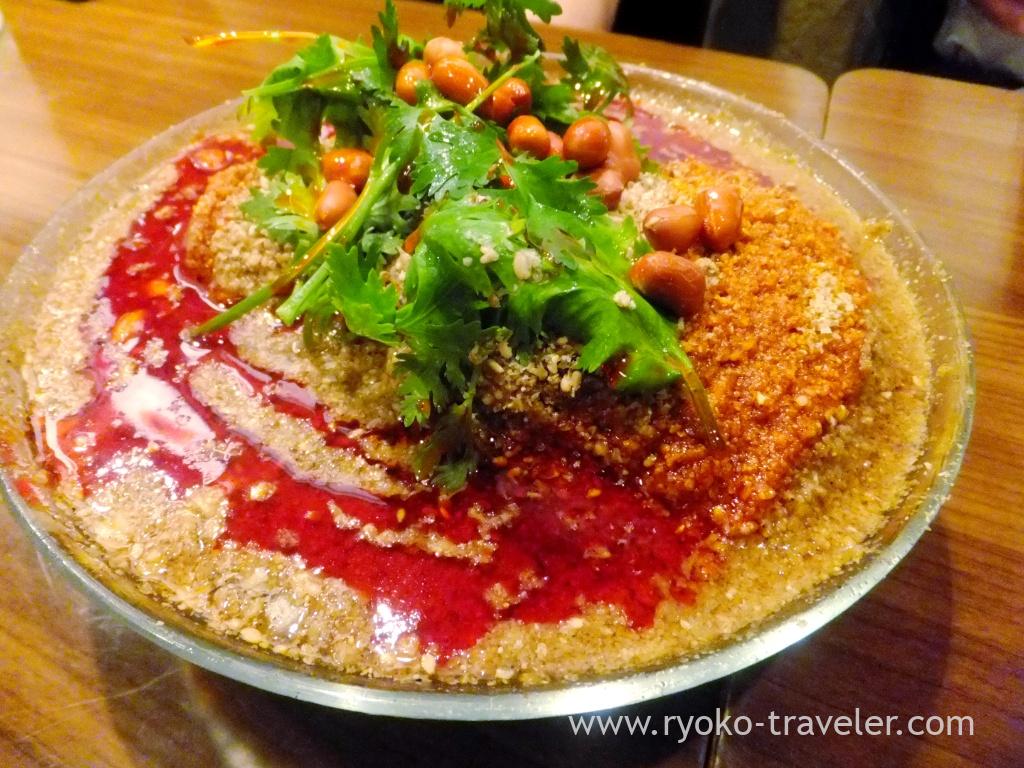 Fried potato and Pleurotus eryngii with shrimp paste (じゃがいもとエリンギの海老ペースト炒め, 1050 yen)
It looks like french fry 😛 Potato and eryngii mushroom had much taste of shrimps and it was tasty. As you see, from those looking, we couldn’t find which was which until we bit them :p 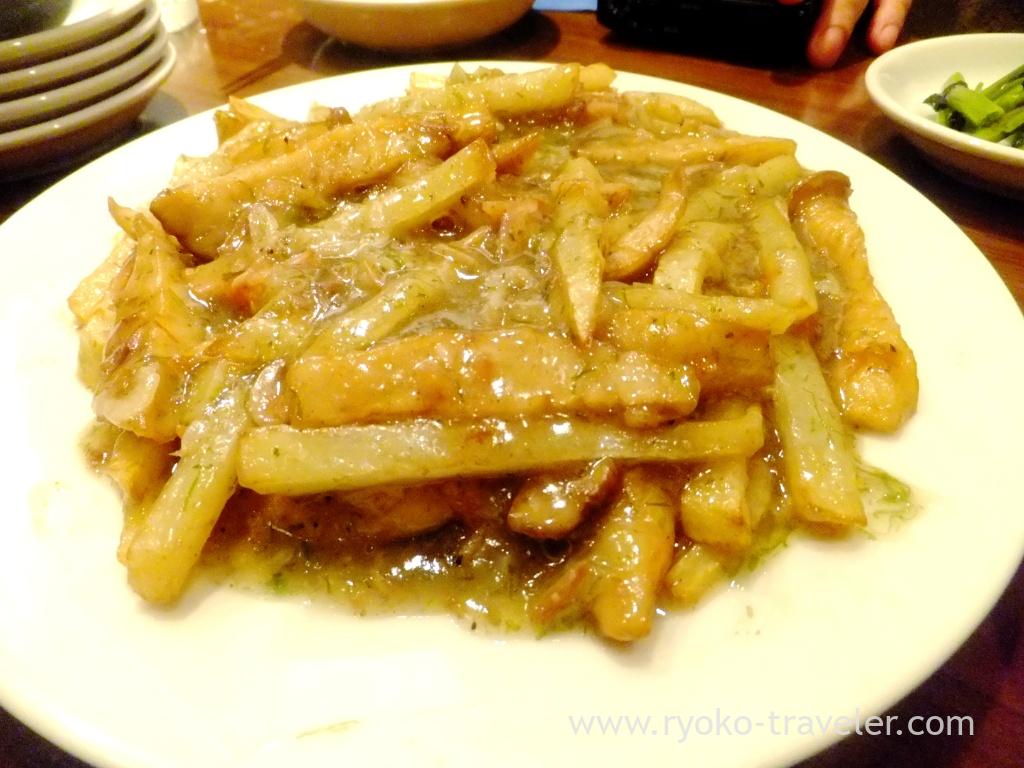 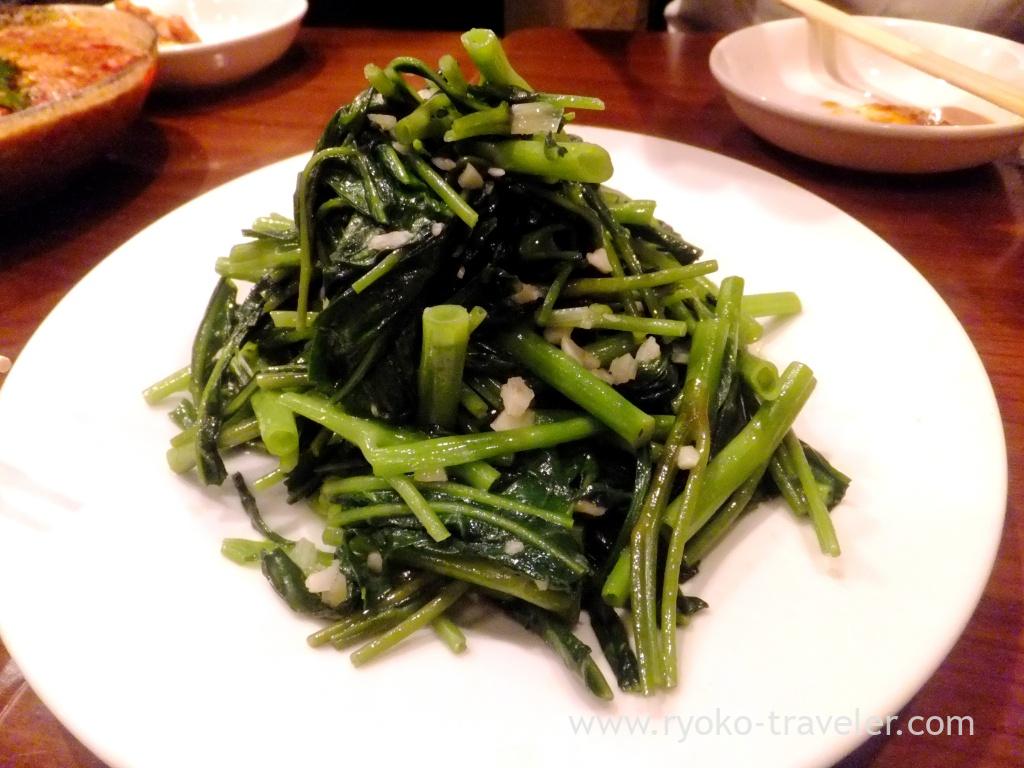 Fragrant deep fried quail (うずら丸ごと香り揚げ, 2560 yen)
Two whole quails appeared ! Wow ! And much coriander under the meat !
Quails were hard to separate ! It was muscularity quail 🙂 Its outside was crisp and the inside was juicy. it was seasoned with salt simply. Steamed pig’s shank with its bone (豚すね肉の骨つきまるごと1本蒸し, 3150 yen)
Chinese meat dishes are dynamic ! Though its large, we could cut it easily by our chopsticks. It was so soft and it was like the mass of collagen ! 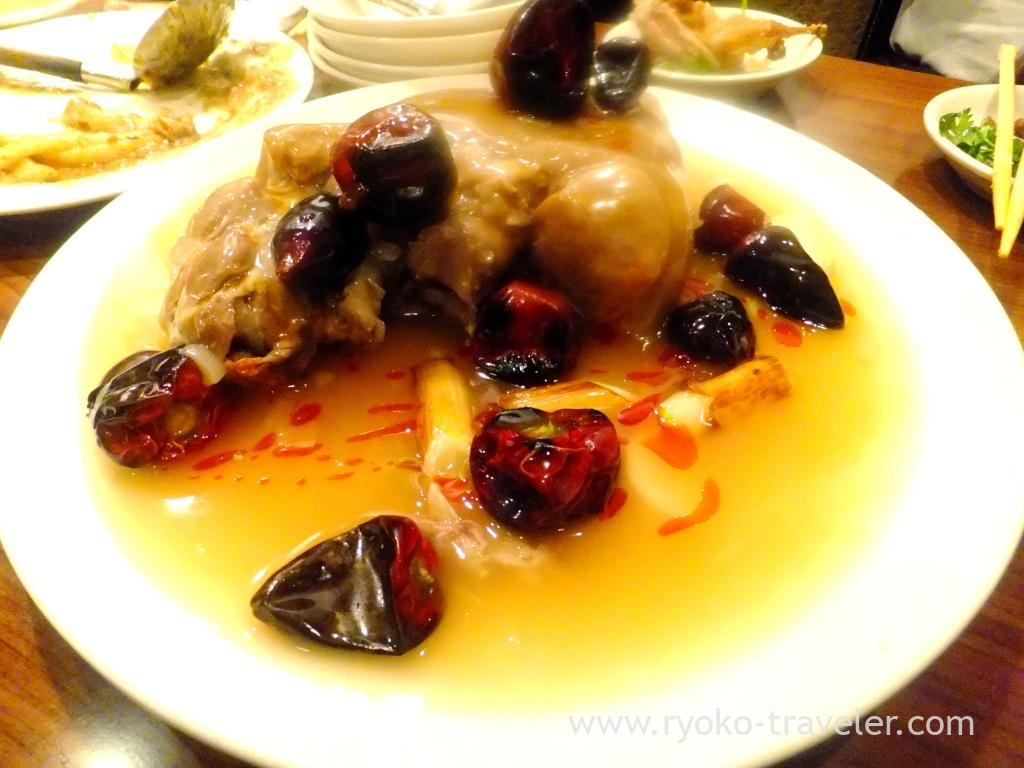 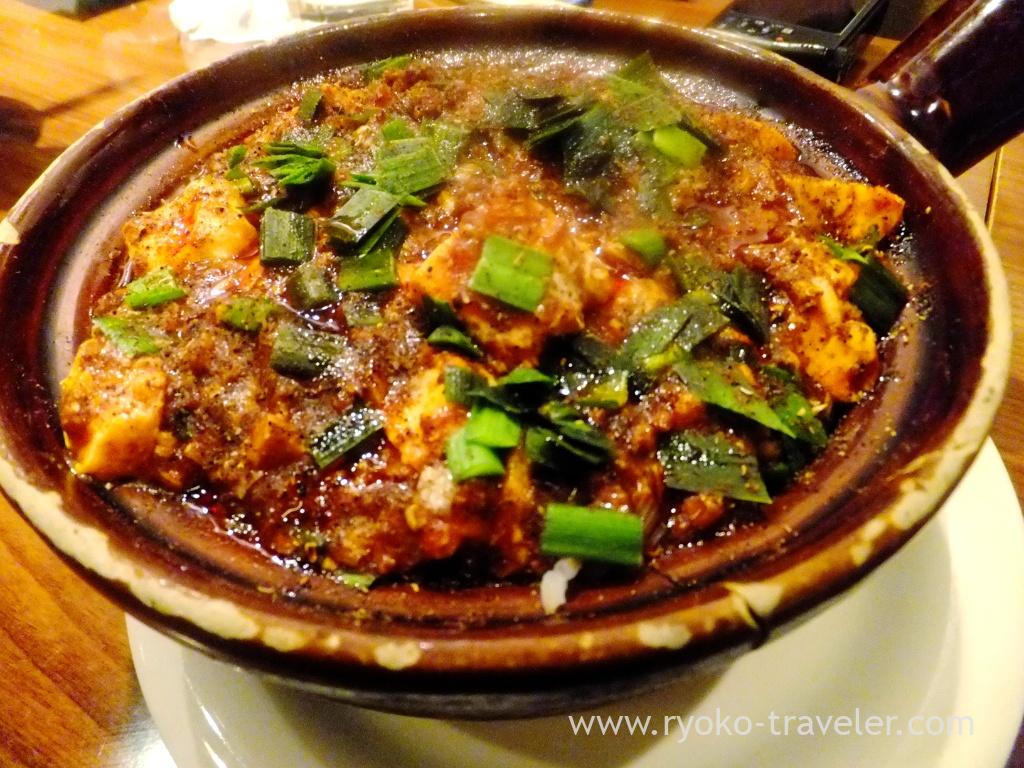 It was terrific food all the same…. Great amount of sichuan pepper on it. I can’t forget the taste !

Though we felt enough full, someone wanted to eat Spring roll with yum, dried shrimps and shiitake mushroom (山いも・干しエビ・しいたけ入り春巻, 550 yen per three).
And he ordered soon. Its outside was crisp and the inside was sticky.I ate it so carefully, but its inside was extremely hot all the same. As we thought, four person is good when we visit there.

I think this's the first time to visit Kita-Senjyu. There's a busy shopping street. After a few minutes walk from the s...

Celebrating myself with salmon roe I intended to post about the sequel of Tankiyo, but I completely recovered from poor...

Midtown Hibiya was open in March, 2018. There was packed with people after a few month and I couldn't go there with eas...
Tsukiji Market : Hearty breakfast at Yonehana (米花)
Higashi-Funabashi : Unajyu and real hitsumabushi at Hannari-tei (はんなり亭)