Mingled with local people and and had noodle.

The last morning of my staying in Taipei. I got up early and checked out from my hotel and left my baggage at the hotel.
And I went toward Ningxia night market (寧夏夜市) that I visited the previous night.

I had breakfast at this shop named “阿川蚵仔麺線”.
They cook in front of the shop and serve.
They are rice-flour noodles shop (Taiwanese narrow noodles named “麺線” like vermicelli) having oysters and pork giblets.
They are open until 5 p.m. So, I couldn’t visit there at the previous night. I conveyed “I want to eat flour-rice noodles having oysters and pork giglets in the shop !”  with gesture. And the lady led me into the shop 🙂 My breakfast was served a few minutes later.
There’s grated ginger, spicy miso and spicy vinegar on each table.
Small bowl was filled with the narrow noodles, smaller size of oysters, pork giblet and coriander.
Flour-rice noodles having both oysters and pork giblets (総合麺線, $NT60) This bonito-based soup was mild and it tasted like Japanese soup.

I put some grated ginger and spicy miso after a while. 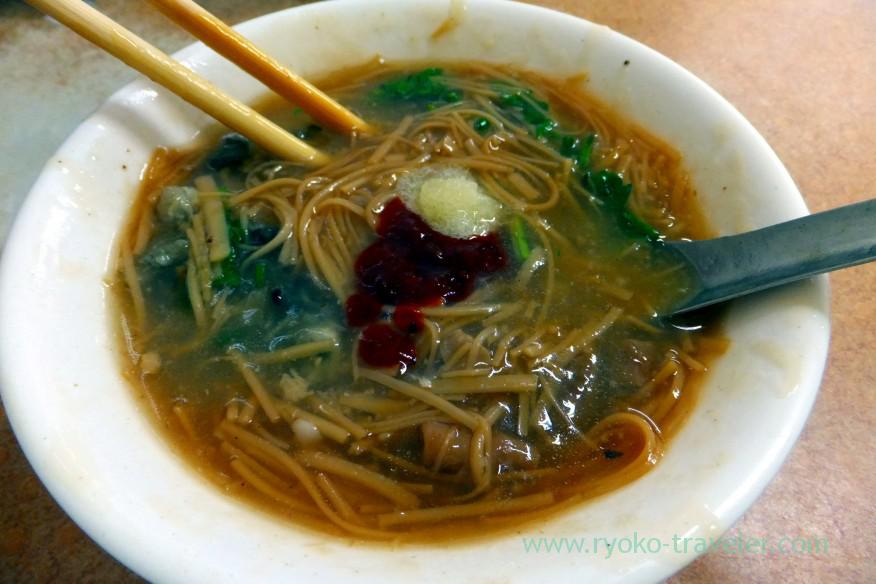 I wanted to have second helping of it :p

After that I went toward Difua street (迪化街) for getting mullet roe and dried fruits.

I dropped in at two dessert shops on my way to Difua street.

Taipei 2016 Spring : Ningxia Night market (寧夏夜市)
I met my friends' longing shop by chance. I dropped in at Ningxia Night Market on my way to my hotel. When I got to there around 8 p.m., there were many people. The market is open from 6 p.m....
www.ryoko-traveler.com

Taipei 2016 Spring : Awesome Mango Xue Hua Bing at Pinsan (冰讃)
The most impressive food at this trip ! As soon as I got to Shuanglian station, I went straight to this shop having blue signboard. As far as I know, everyone who visited Taipei enjoyed this shop wi...
www.ryoko-traveler.com

And fortunately I found my longing watermelon juice (西瓜汁) that I had wanted to try for a long time and it can be gotten at Family Mart only 🙂
It was delicious.