Tamagoyu in mid-summer is a little bit dangerous

My mother won the lottery and she said to me, “I want to go Tamagoyu !”, so I took a reservation and went to there with her.
We had been to Tamagoyu in Winter only and this was the first time to visit there in summer !

(She didn’t get so much money. She only got money as same as the fee of this trip :P)

On arriving at Fukushima station, we found it was too hot as same as in Chiba.
The pickup bus to Tamagoyu welcomed me as usual. 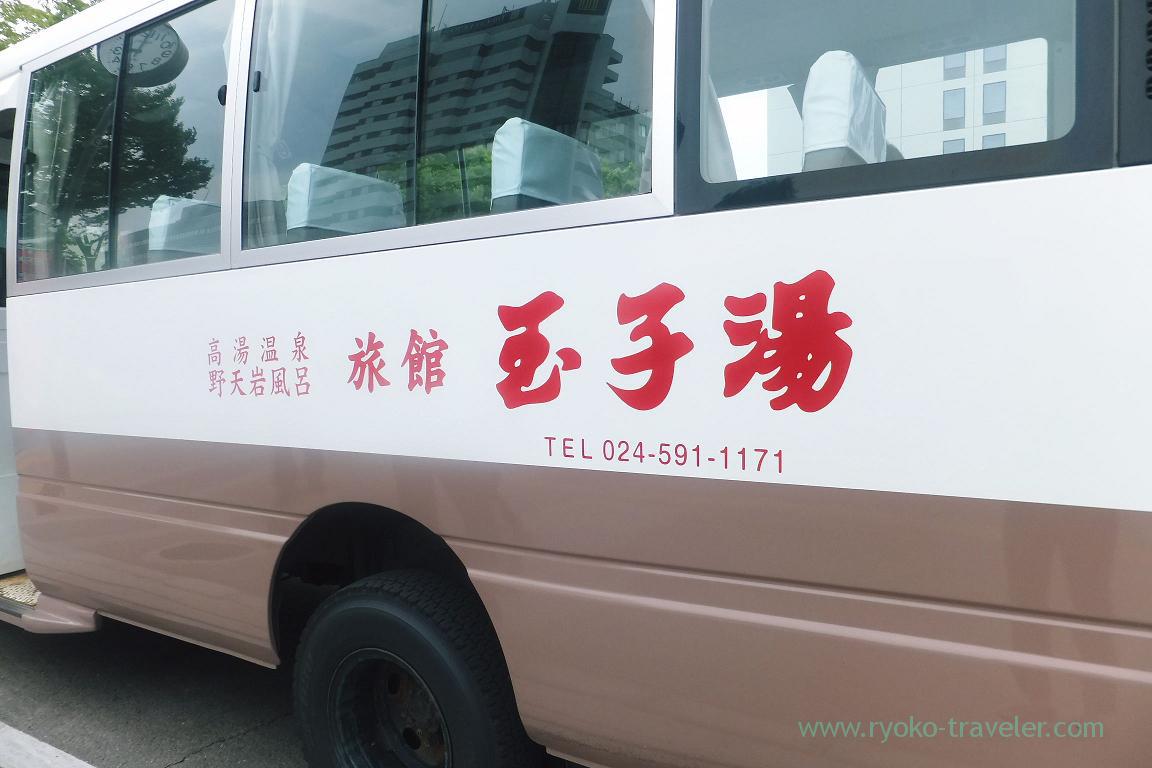 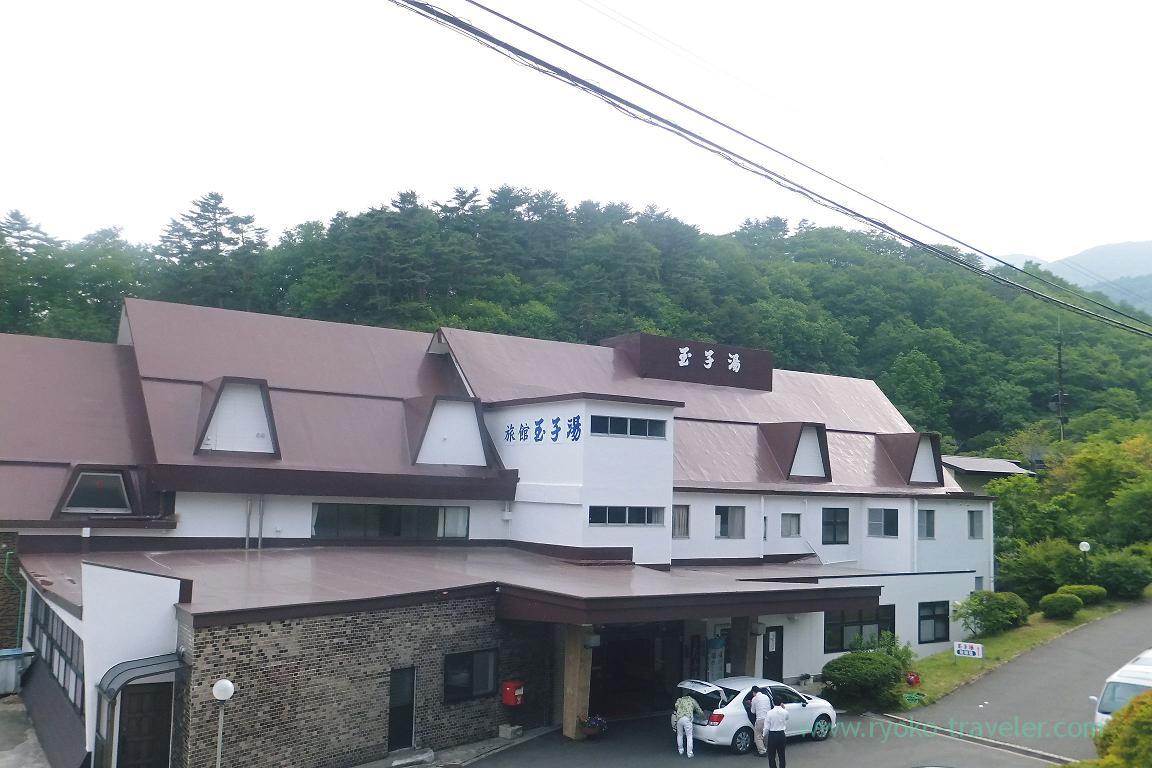 This thatched roof is too famous ! There’s bathroom in the small house. 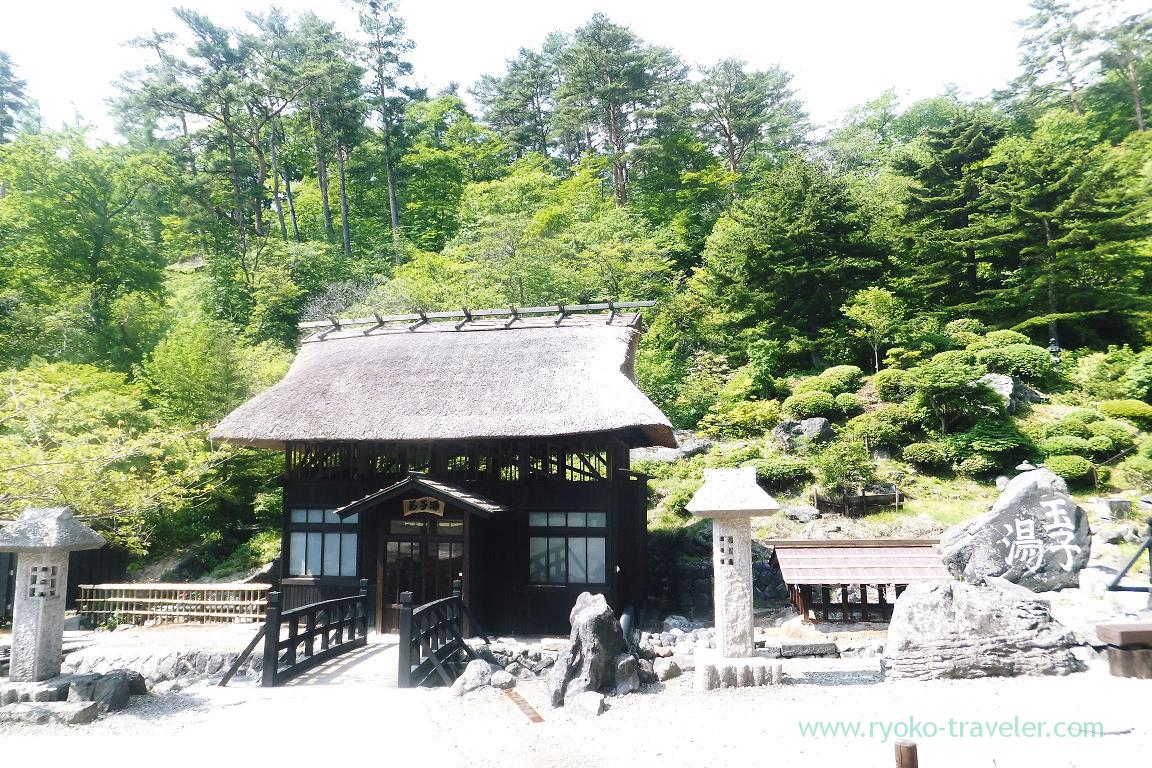 At first, we took a rest for a while. Shiitake mushroom tea, plum, mochi… and coffee ticket. 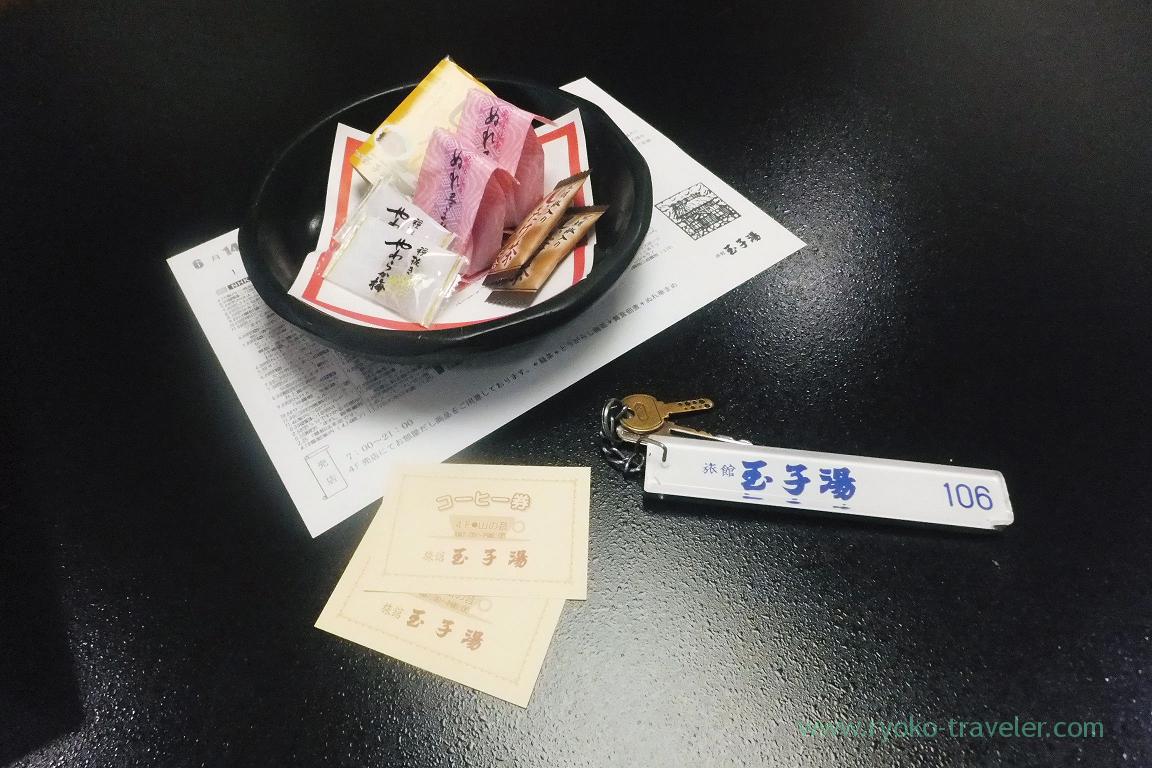 When in winter, some roads are closed. So, we don’t go out of the accommodation basically.
I knew there’s “Fudo-taki falls” in Takayu onsen area, but, the road on the way to the fall is closed in winter, too.

So I left my mother in the room and got out of the hotel. (My mother hate walking …) 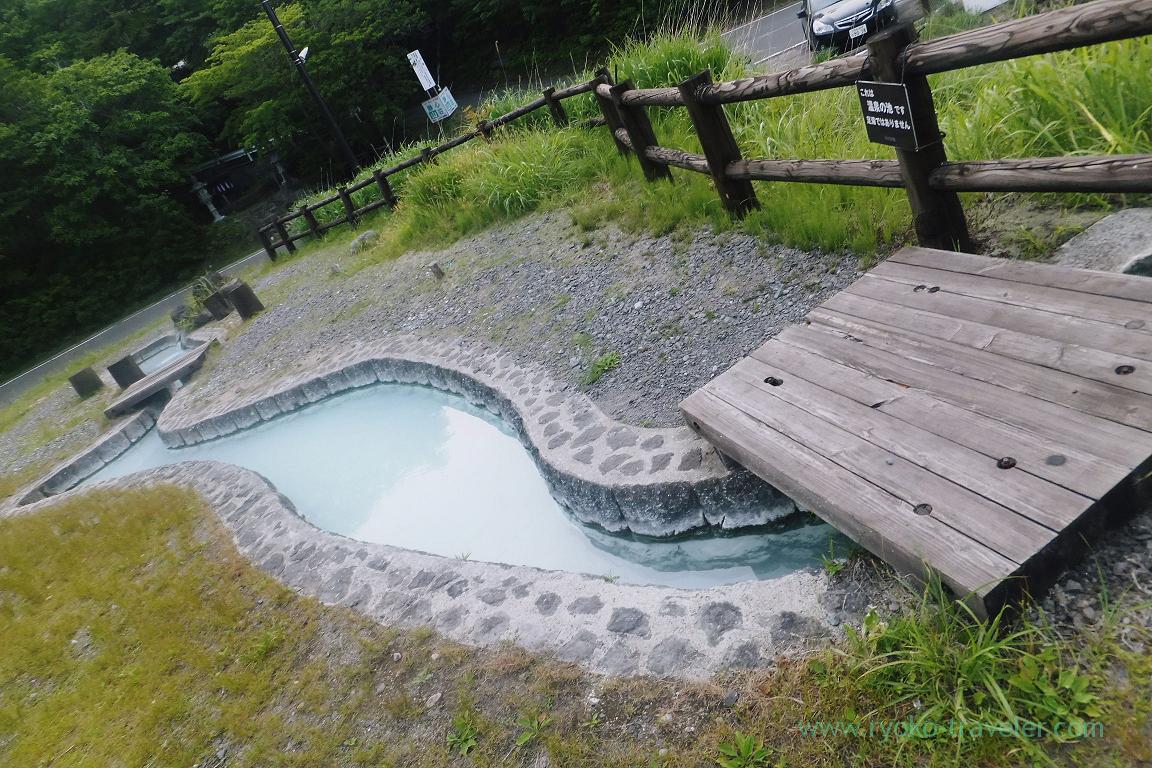 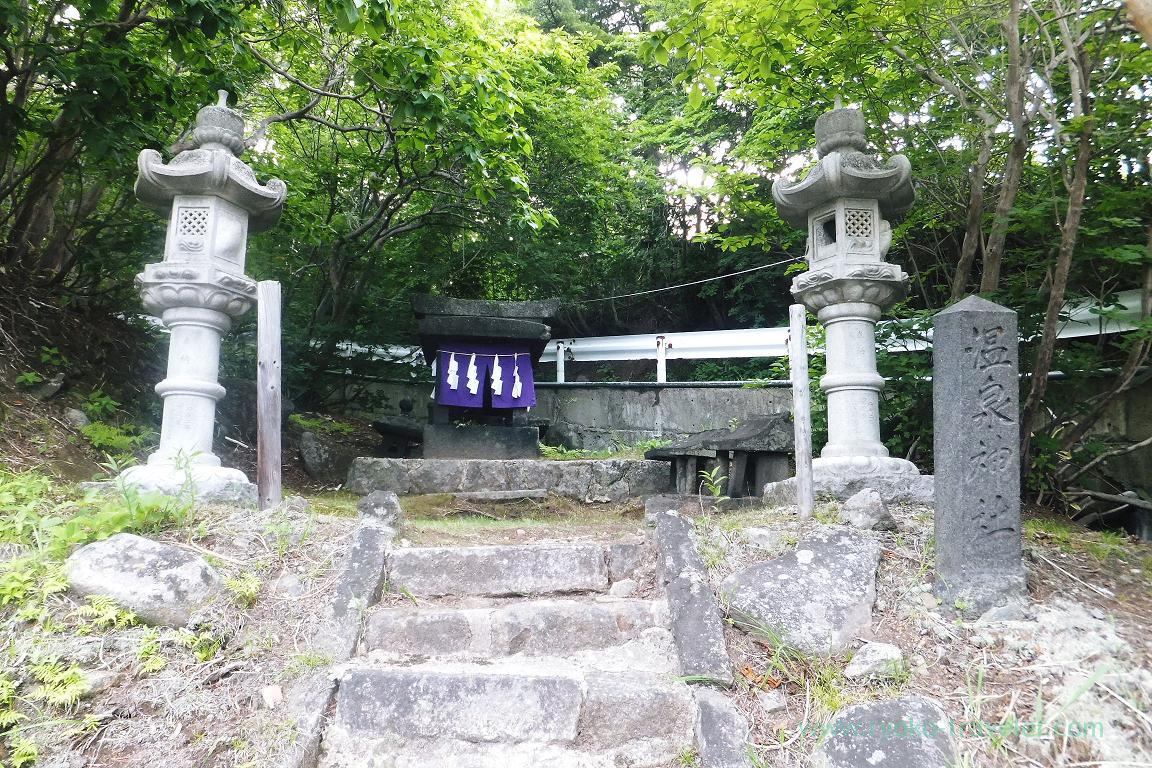 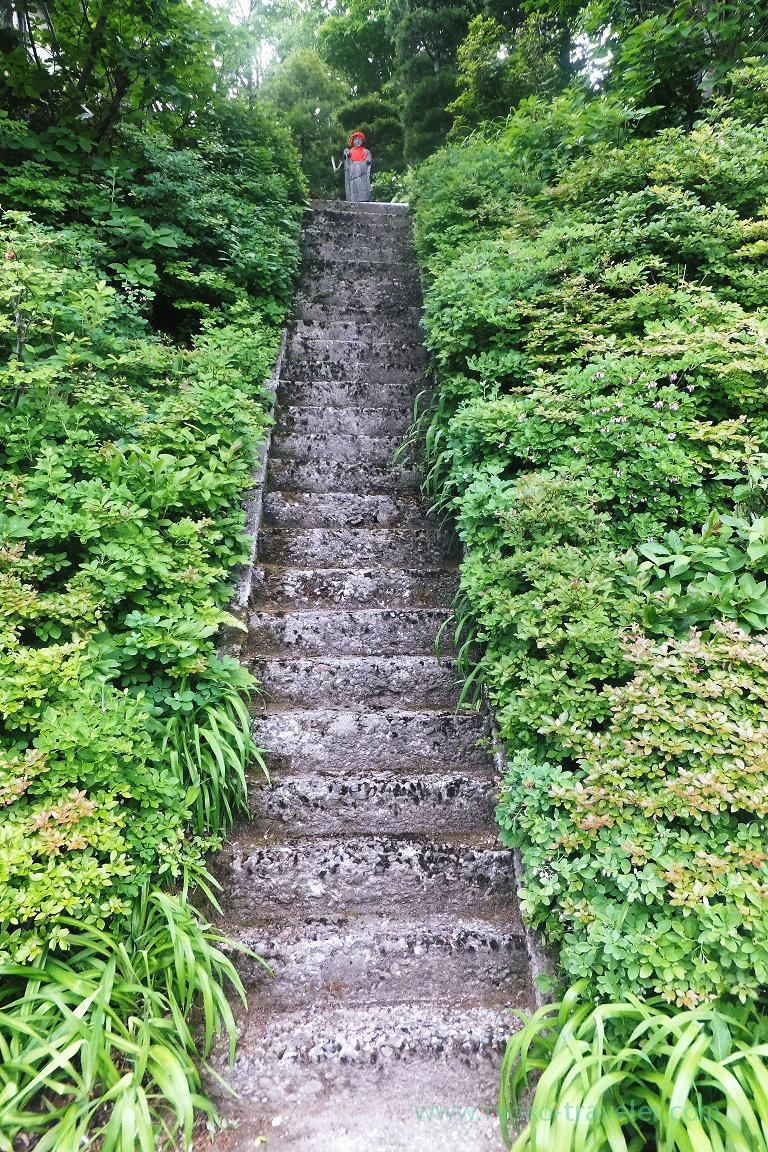 About 20 minutes walk from Tamagoyu, I met this sign.
The entrance of the road to Fudo-taki falls.

This parking lot and building is Kagetsu High Land Hotel’s. 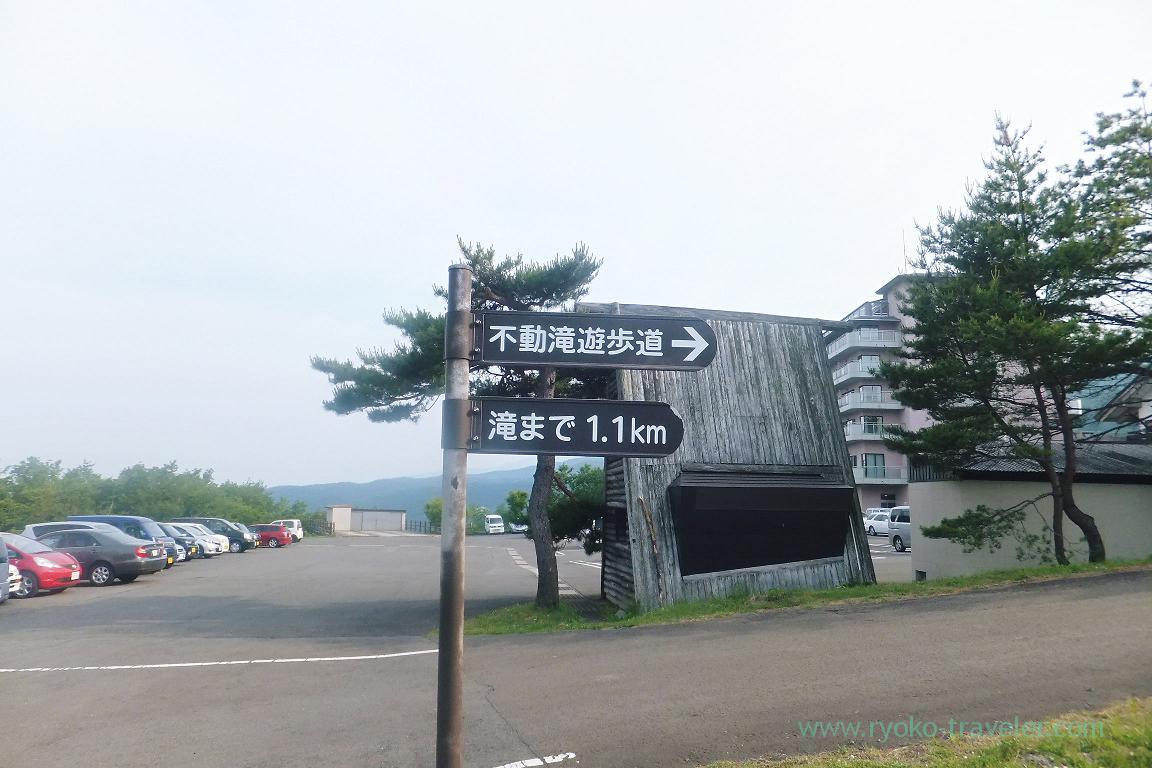 By the way, I didn’t met someone from here to Fudo-taki falls. 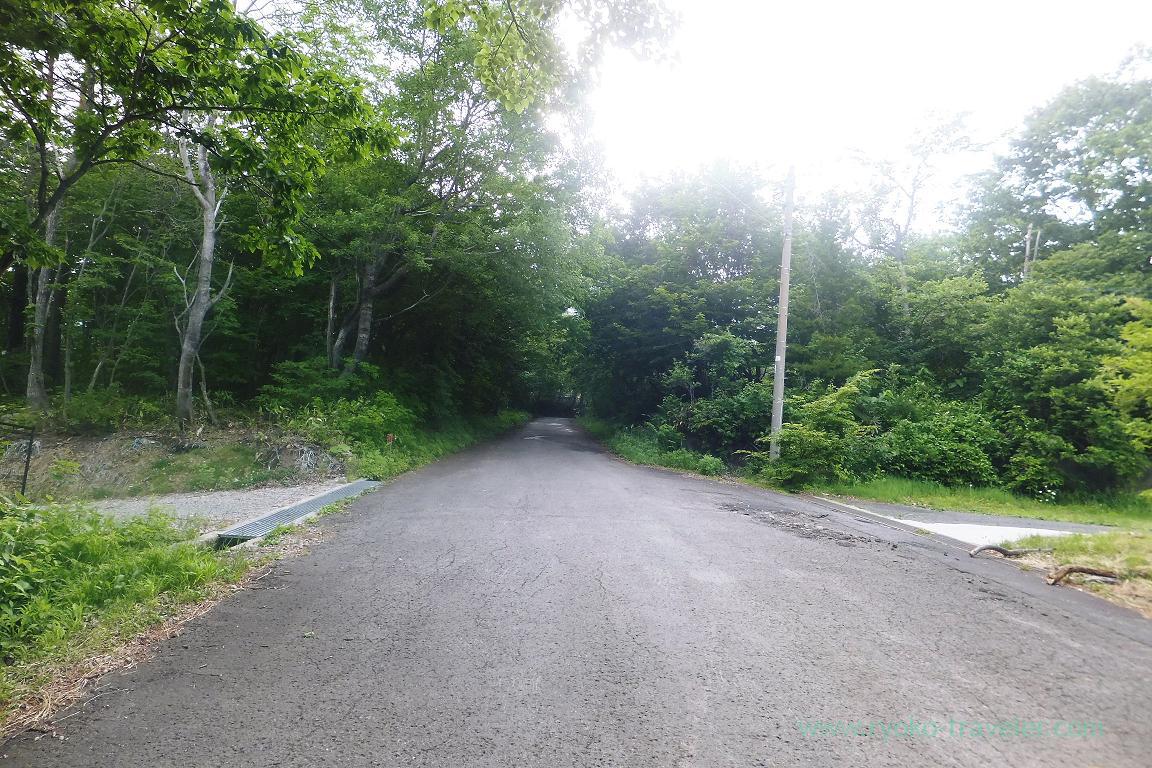 Though it is not big falls, its sounds, view was good. 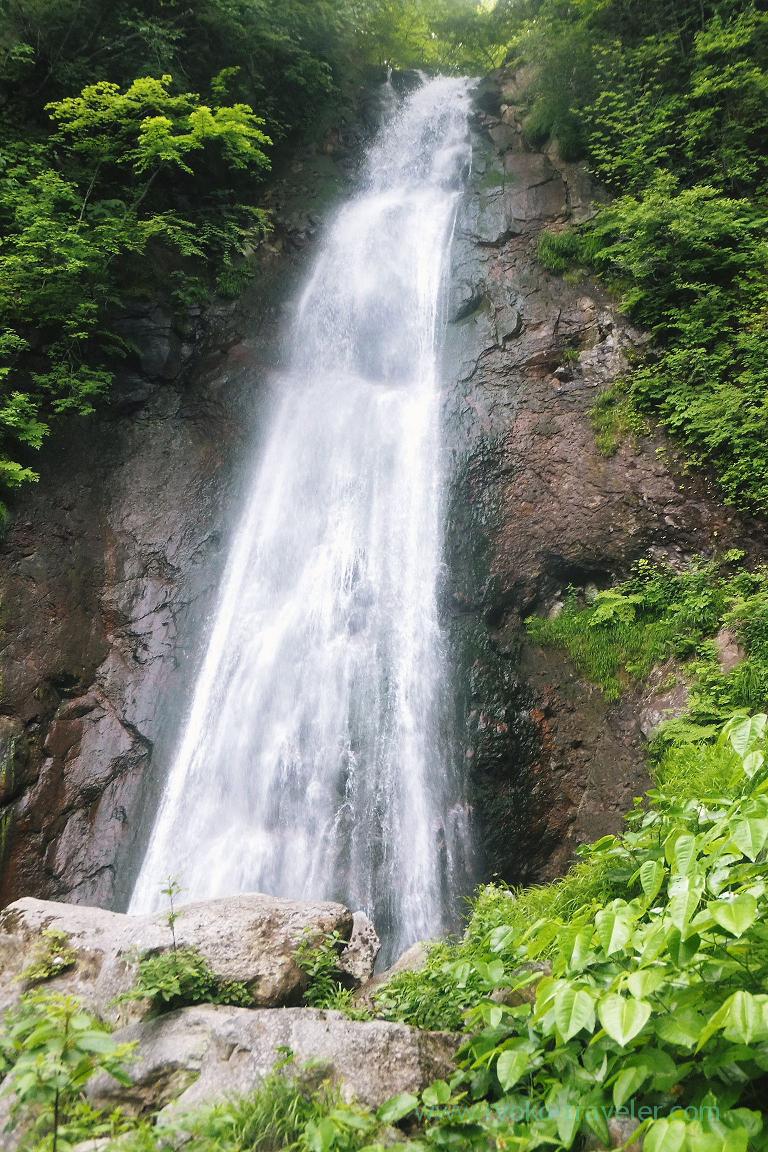 And then I went back to Tamagoyu. It was already past 5:30 p.m. I had no time to take a bath before dinner because dinner time was 6 p.m. We had dinner at our room. Truthfully speaking, their foods are not delicious. But not bad.
Tamagoyu’s specialty is onsen, not foods. 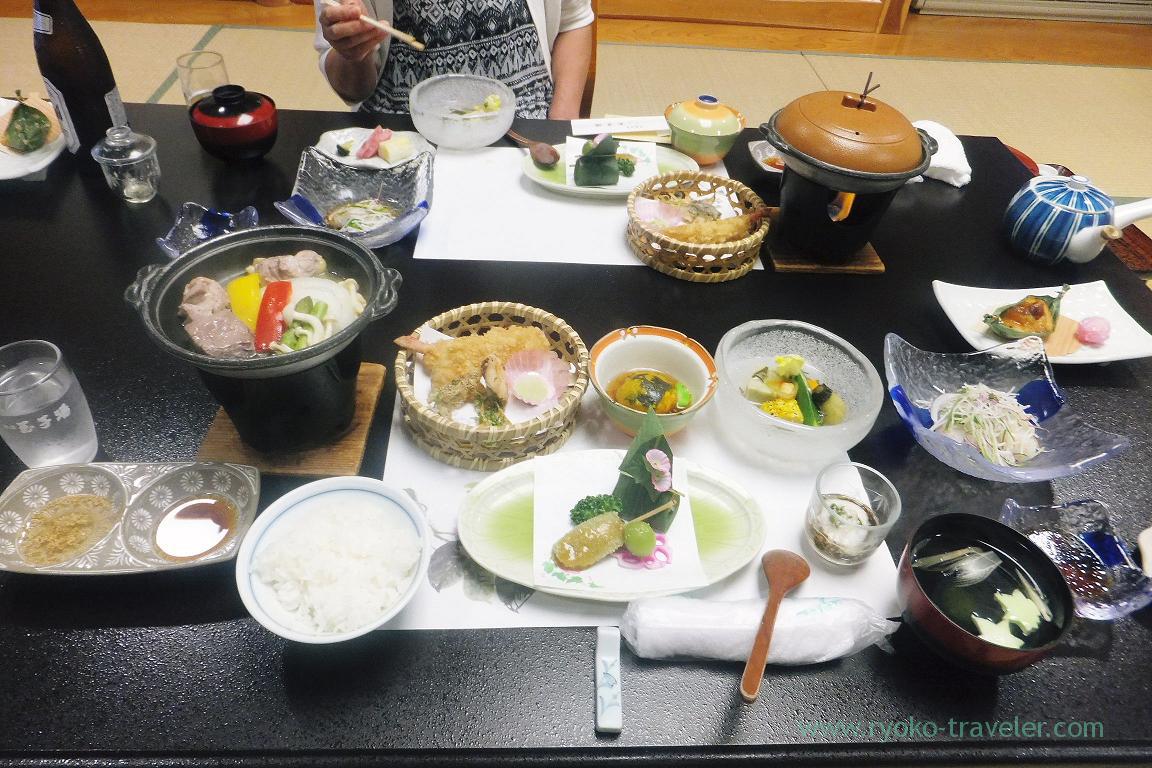 After that I took a bath.
Tamagoyu have some bathes inside and outside of the house. I enjoyed the sulfur spring to the full.
But I deleted my photos about bathes by mistake. So, please visit my posts about Tamagoyu last time.
http://www.ryoko-traveler.com/tamagoyu2013-1/

The next day, I got up early and took a bath again.
But an awful accident occurred to me at the bath.

I had heavy dizzy just after getting out of the bath.
The temperature of the hot spring was too hot for me just after waking up.

Tamagoyu’s onsen resource is around 43 Celsius. But in winter, it get easily lukewarm.
But in summer, it remains hot. So, putting body into the onsen water as long as in winter is very dangerous.

I couldn’t move for a while.Waterfall of sweat began to pour down my body.

But, breakfast time didn’t wait for my recovery…
I ate some. But I didn’t have appetite. I gave my onsen tamago that is my delight to my mother… X( 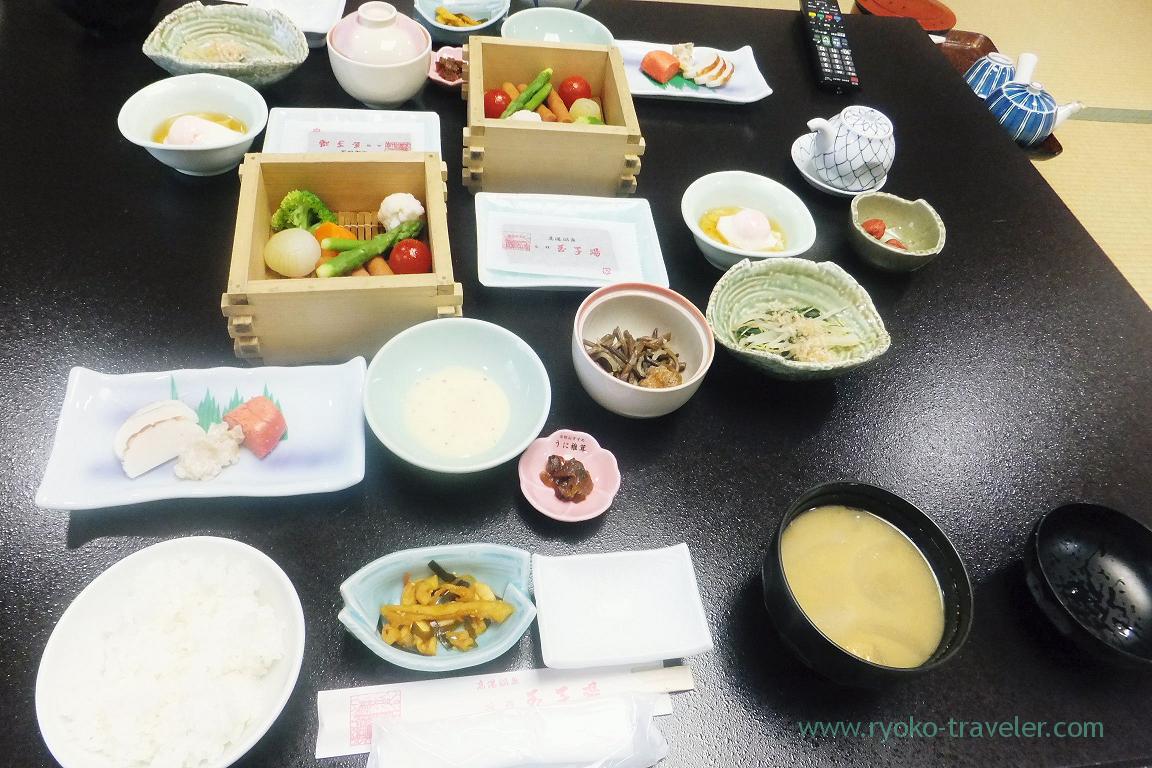 After a while, I felt I’m recover from the dizziness.
So, I went to the open-air bath again… Yes, I know I’m crazy…. But I wanted to wash away swet.

And then we checked out and waited the bus to Fukushima station.
Of course, with a cup of coffee ! (We had coffee tickets !)

After we got to the station, we had tea at the department store named Nakago. 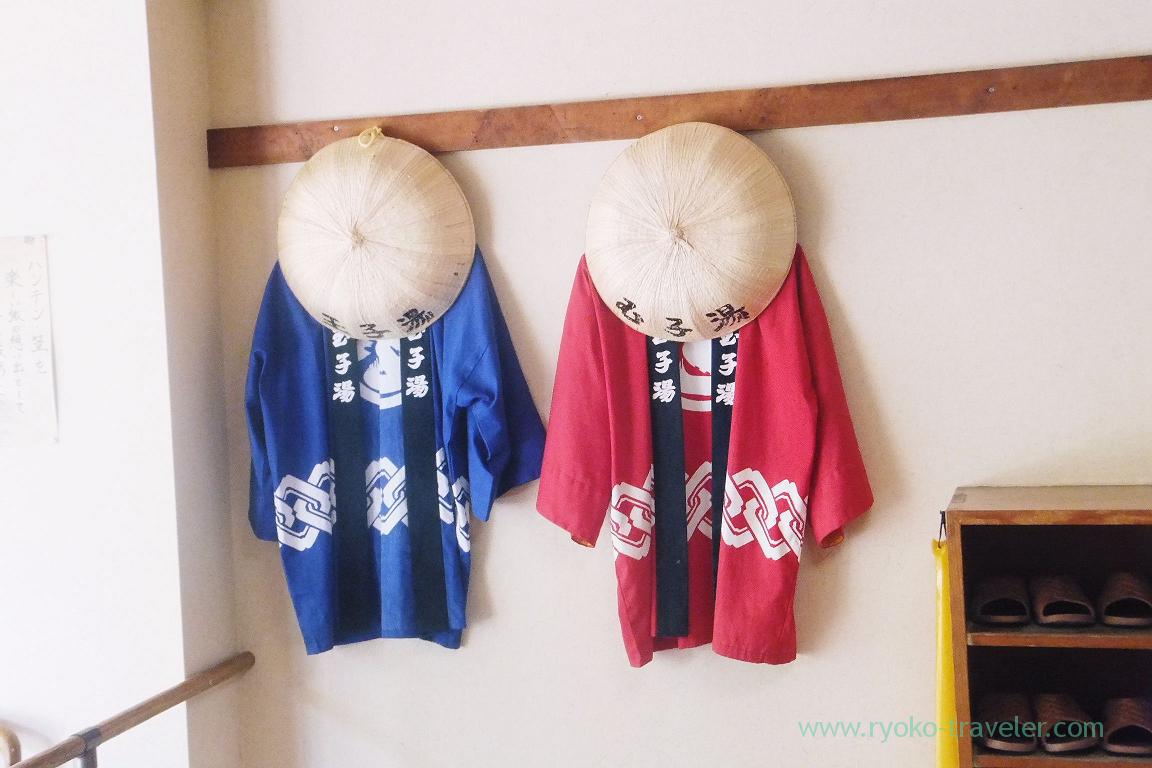 After arriving Fukushima station, we went to ramen shop and then we took a rest at a cafe. Both of shops are popular aro...

White world and White bath. I took my mother to Noji onsen in Fukushima last month. I wanted to post about the trip af...
Chocolista – Tully’s limited drink of this summer
Fukushima : At fruits kingdom (after Tamagoyu)