t was really crowded. Well, it was in mid summer vacation.
I tried not going to Monzeki street, that is beyond the Shin-Ohashi street. But I went to there at last.

” I want to eat conger at Yoshino, I want to eat spaghetti and I also want to eat kakigori. 😀 ”
I asked my friend who knows Saturdays’ Tsukiji well so, and he showed me the way 🙂

First of all, we went to Tsukiji Yoshino. The shop stands a maze of streets, so it is hard to arrive at the shop without asking anybody on the way.

Because it was new shop, so its signboard was glossy and the lights were bright 🙂 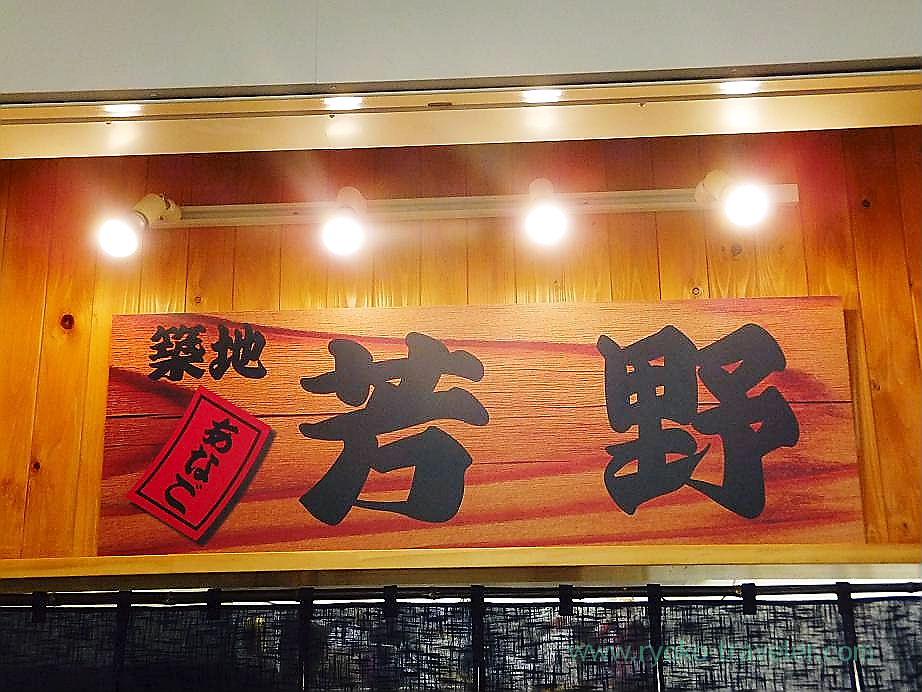 This shop was so small. One counter for 3 persons, one table for 4 persons(but it was so small for 4 persons, it was good  for 2 persons).
I sat down at the counter, I saw conger being grilled, grilled conger dipped into sauce close to. It was fun !

This chopstick rest was cute 🙂 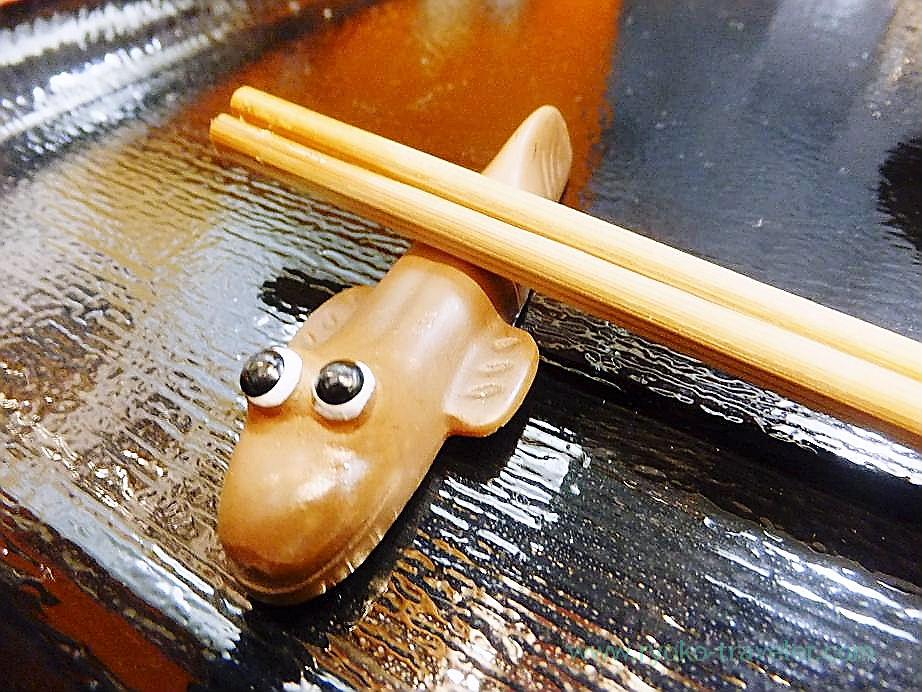 Well, I ordered an Anago-no-bakashi (穴子のばかし, 1500 yen).
About this dish :Steamed conger (anago) with soy sauce on a bed of rice in the box.
It looks like unajyu. There were much slices of conger on rice. Its texture was soft 🙂 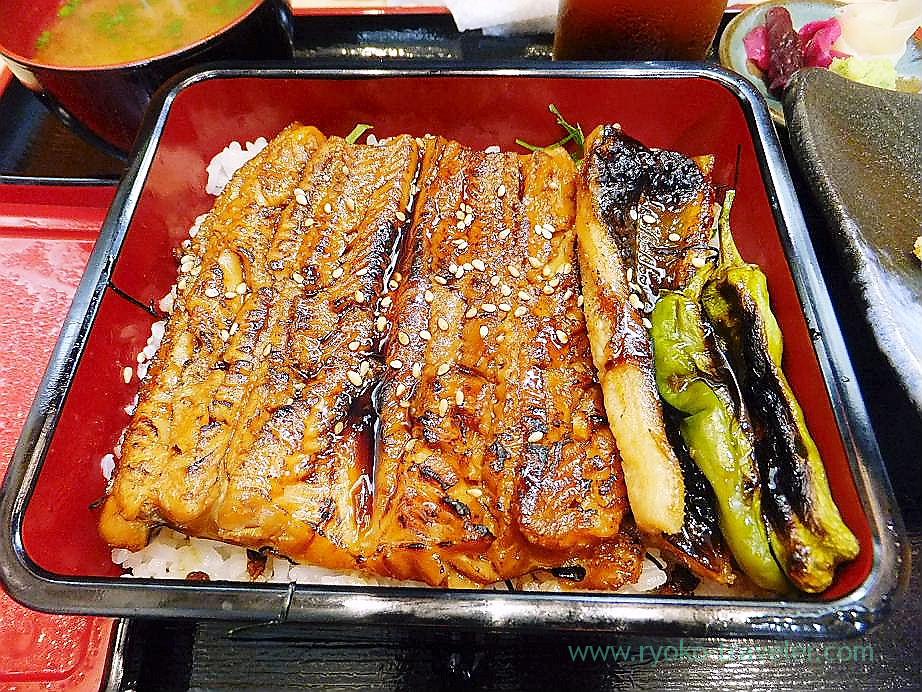 That’s shirayaki (白焼き, 2000 yen). My friend ordered it. shirayaki is way of cooking that grill with salt only.
I ate it a little. Its smell of grilled conger was really good. And it tasted nice, too 🙂 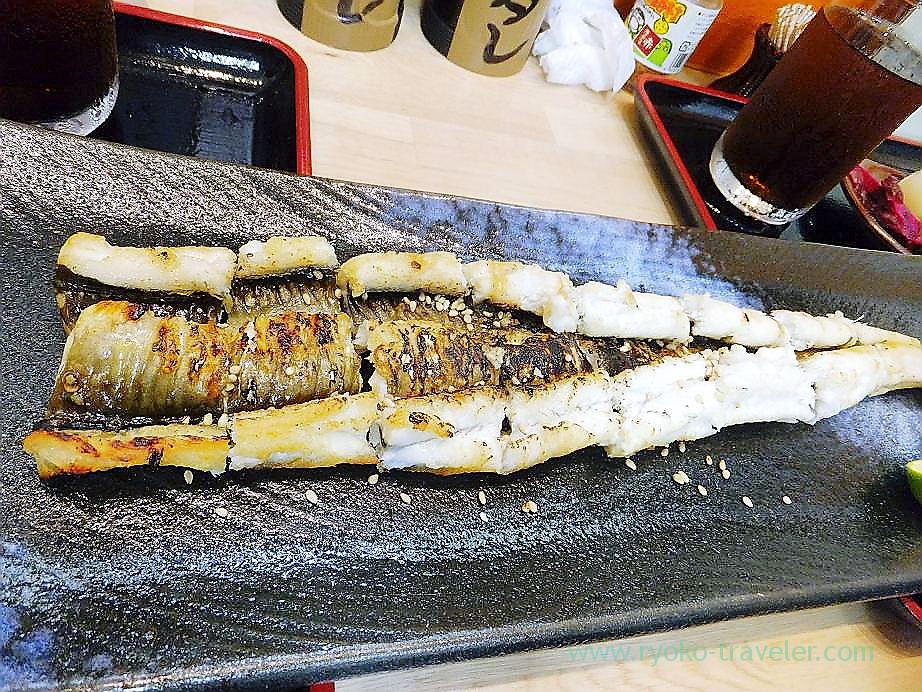 I didn’t know how to take the picture! It was too long :O

Next, we went to eat kakigori at Ginza.

It is Chinese tea shop that named Santokudo.
Teahouse is upstairs. They sell Chinese tea on the ground floor. 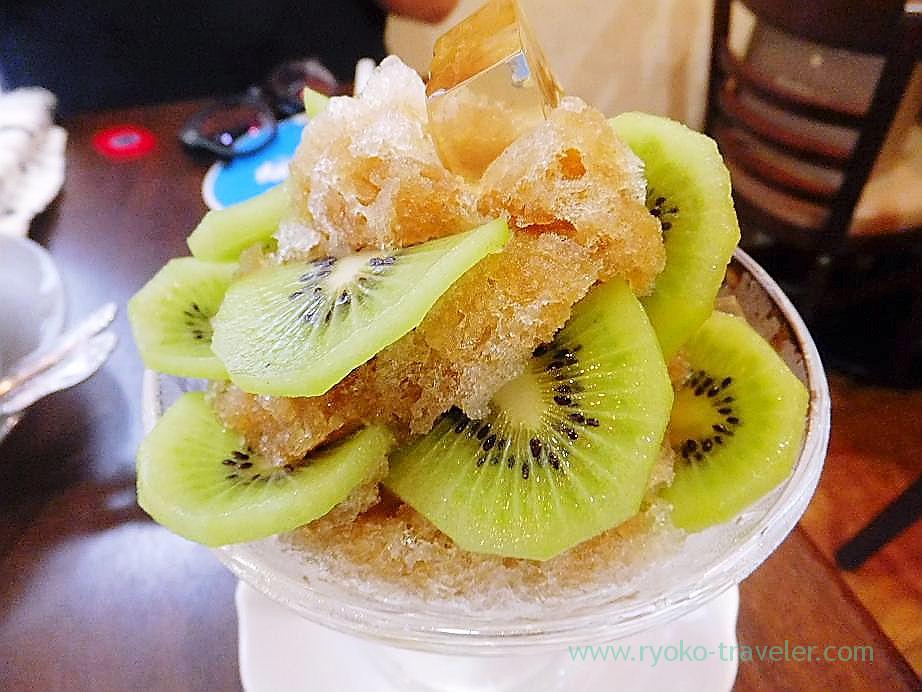 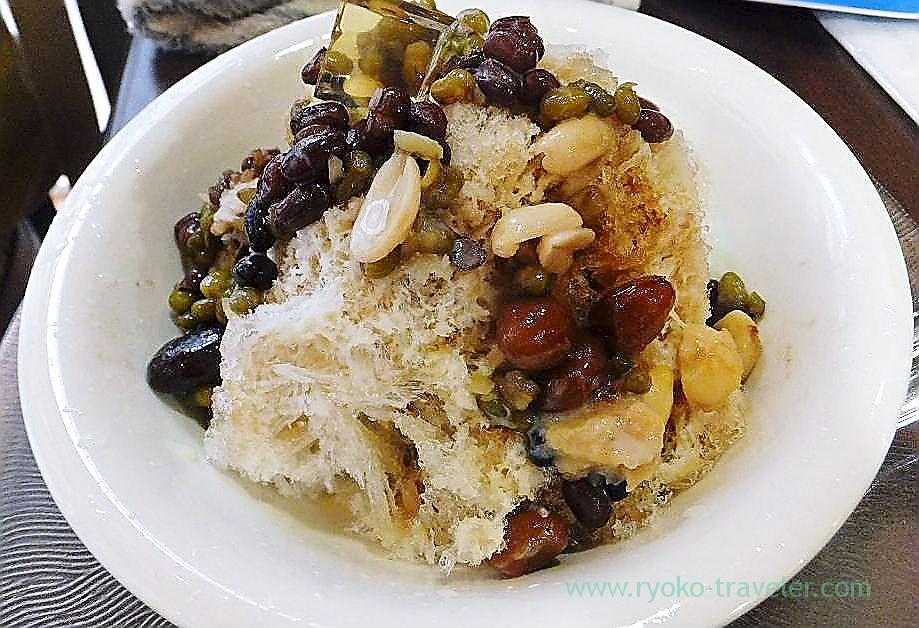 It rained heavily in this day morning, and suddenly it began to clear and raised the temperature.
So, it got steamed. I felt I was in sauna 🙁

But it was good day for eating kakigori 😛

By the end of eating kakigori, I felt a little hungry. I felt like eating spaghetti 🙂

So, we went to Four season.

My longing spaghetti at Four Seasons.

At first, I intended to order Neapolitan, but I tasted curry spaghetti. So, I felt like eating other type of sauce. And I ordered a Wafu spaghetti (和風スパゲティ, 820 yen). 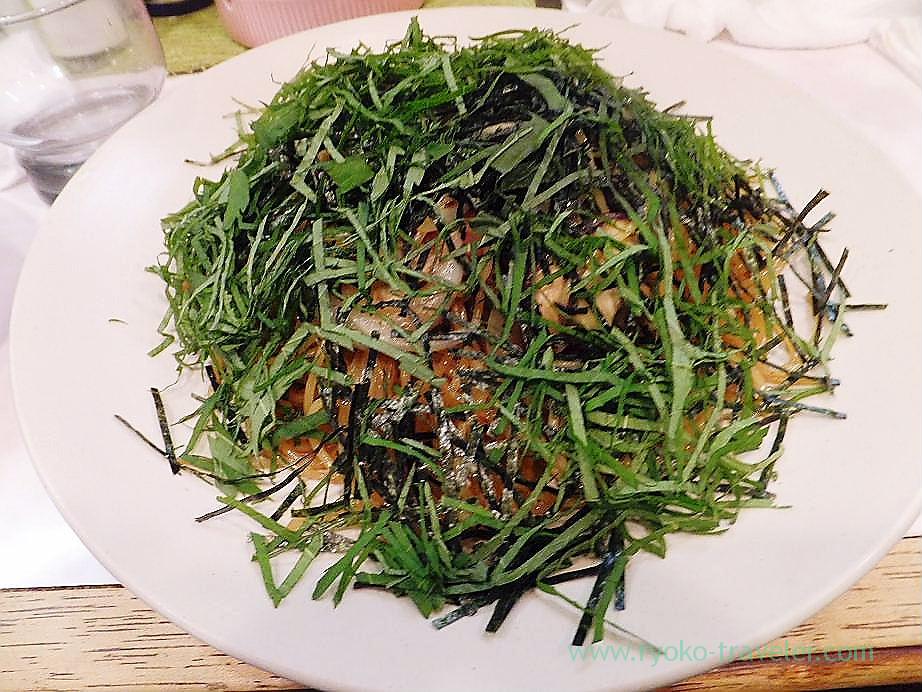 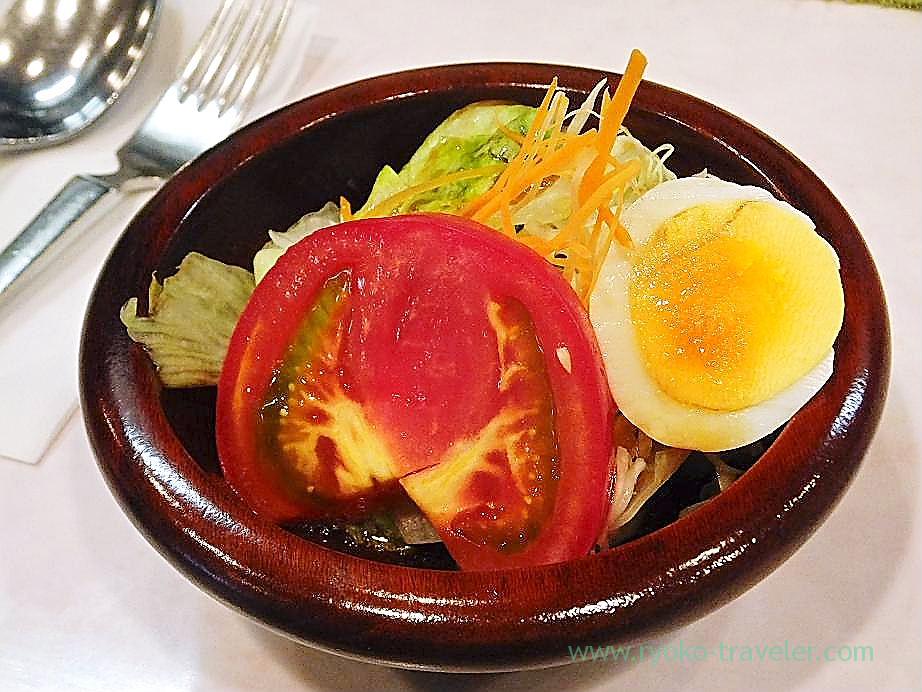 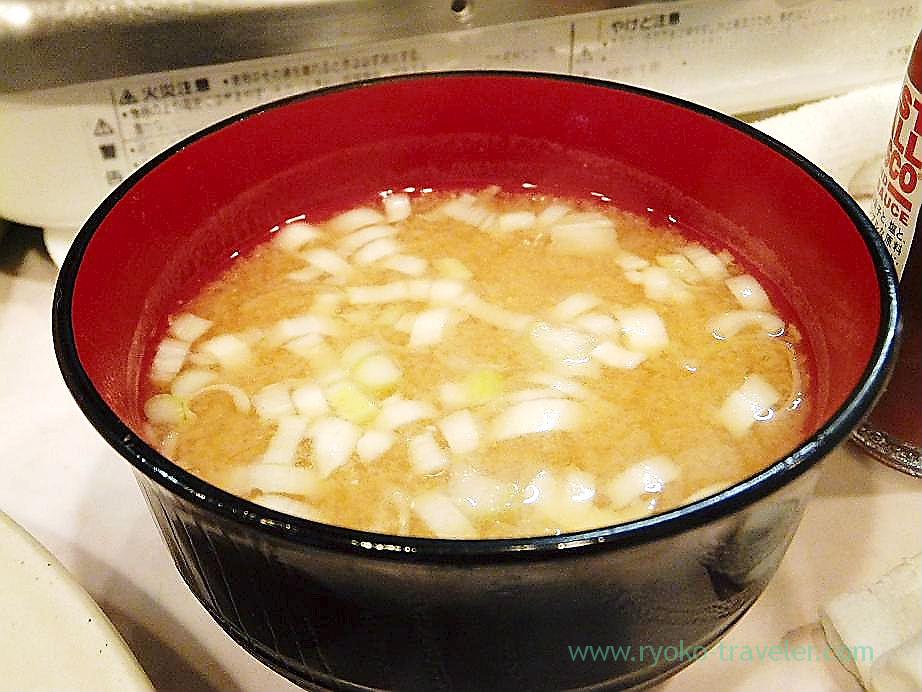 Spaghetti with squid, shrimp and tarako (いかとえびとたらこ, 870 yen). My friend gave me a little, it tasted good, too. 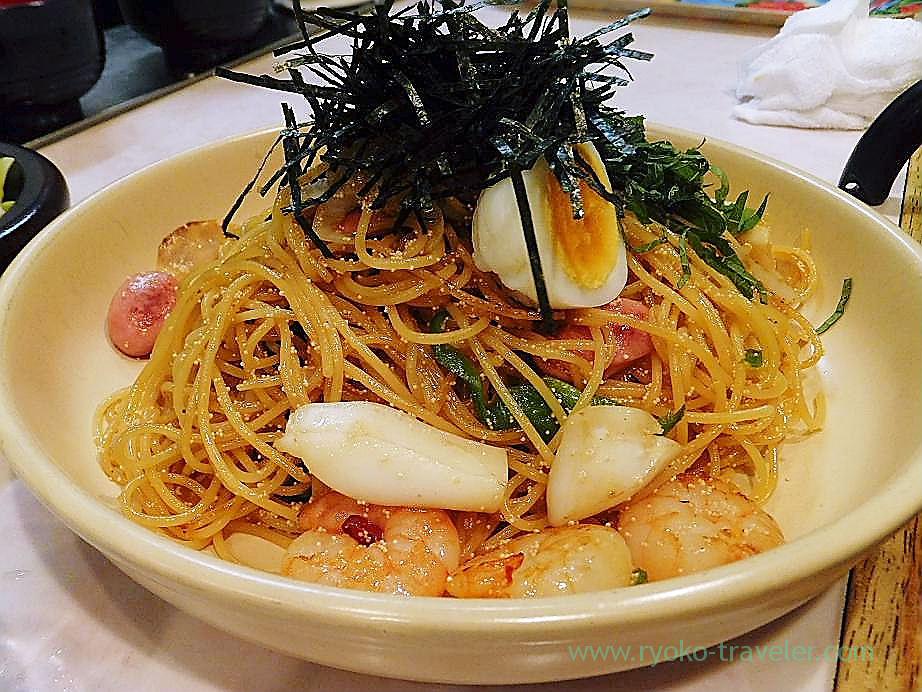 I want to go to each restaurant again 🙂
I saw naporitan after I ordered my wafu spaghetti, I was a little sorry for not ordering naporitan.
It was so good looking.

I want to eat naporitan next time!

Final Tsukiji activity 2015 at Odayasu Hello, have you been already to Tsukiji this year ? Tsukiji Market finished t...

One day cold night, I had dinner at Ningyocyo for getting warm with eating warm foods. Historic architecture :D Appeti...

Special beef tongue stew can be eaten some Wednesdays only. I took a day off for eating beef tongue stew at Tankiyo in...
(Closed) Sharikimon Chawanbu (車力門ちゃわんぶ) in Yotsuya Sanchome
Hamburger shop – BROZER’S (Shintomicho)