Notice :The restaurant was closed down because the cook passed away. I really loved his dishes, so I was at a loss. (3rd, September, 2015)

Nothing has been changed on the menu

There’s my favorite Italian foods restaurant that is named Yamagishi Shokudou in Ginza area, but when I went to there this June and tried to reserve next, the chef said, “My reservations are already fully booked this year. I’ll accept next year’s reservation from this October.” I couldn’t believe it.

I had no choice but to give up having dinner at Yamagishi Shokudou this year.
BUT !
My friend who had reservation at this September invited me to the dinner !
Though I has started to go on a diet and I hesitated to go there, I couldn’t stop going there after all 😛

After eating Yamagishi Shokudou’s foods, I usually gain about two kilos 🙁
Maybe his foods have much cheese and heavy creams.

Instead of that, I went to Yamagishi from my office by walk for about 40 minutes.

Here’s Yamagishi Shokudou.
Although I say it stands on Ginza area, it’s edge of Ginza and narrow back alley.
And the restaurant is dim and looks like cave.

* It is open. This is a good photo. It’s brighter than it really is.
When I went to there for the first time, I hesitated to enter because it is dim. It never seemed it was open. 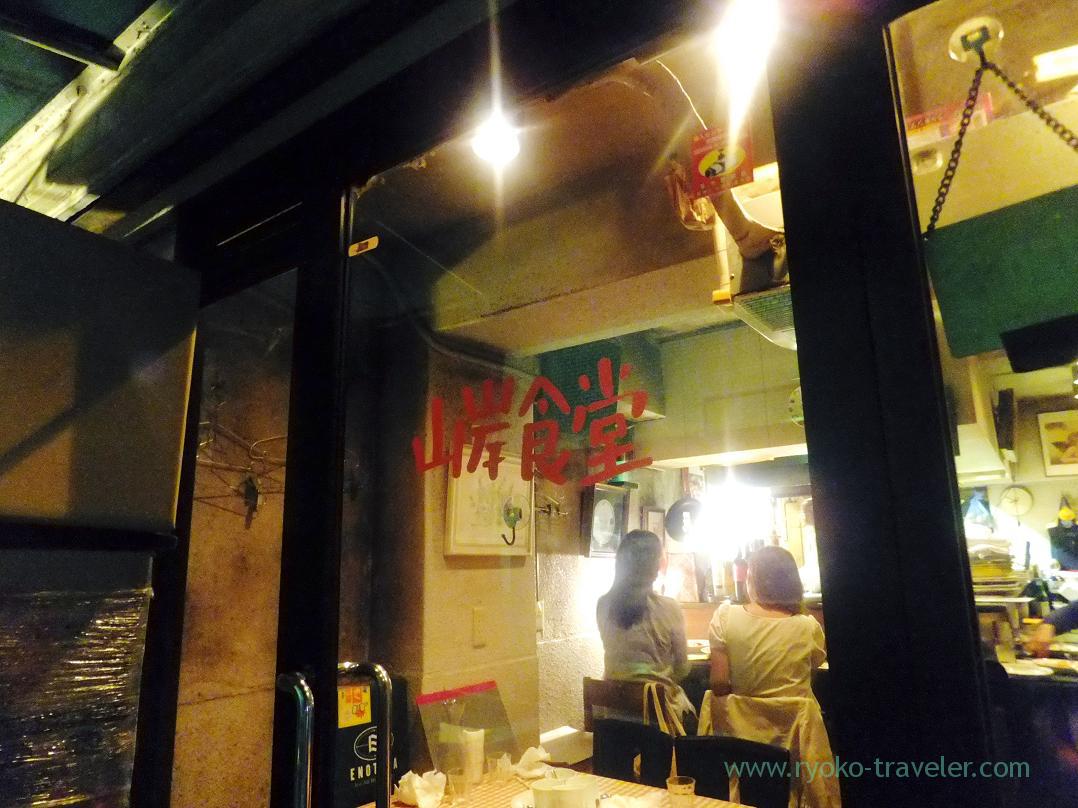 Inside of the restaurant. Old and narrow. 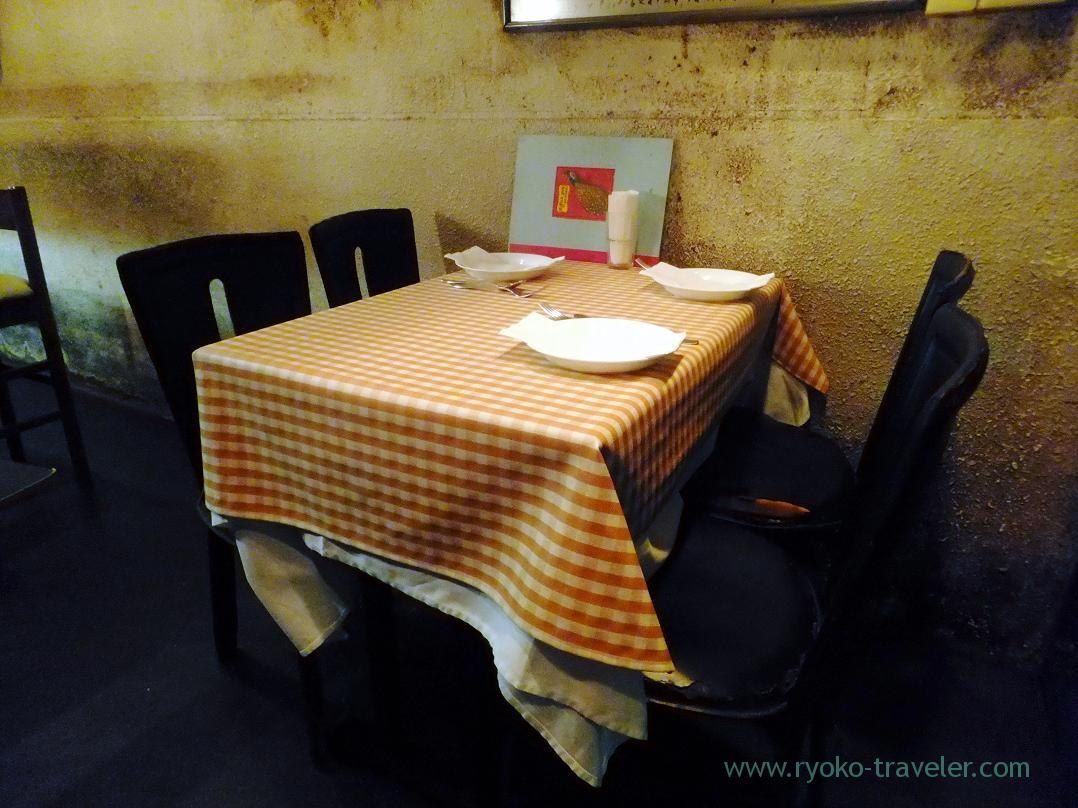 There are two tables for four persons each and a counter table for eight person.
But the restaurant is managed by himself, and he can’t accept much guests.

The restaurant seems cave and old, narrow.
The chef take order, cook and serve by himself. So, guests have to wait to order and come their dishes with patient.
There’re not much kinds of drinks
If you order beer, canned beer is served as in the state of not cold.
Basically those foods’ ingredients are cheese, tomato, zucchini, chicken, mushroom, uncured ham, scallop, basil, olive oil, garlic, shrimps, salmons and fresh cream.
His menus are always the same.

The quality of his foods are excellent.

This is the food that you should eat when you come to the restaurant.
Uncured ham and cheese crepe roll (生ハムのクレープ巻き, 1400 yen) 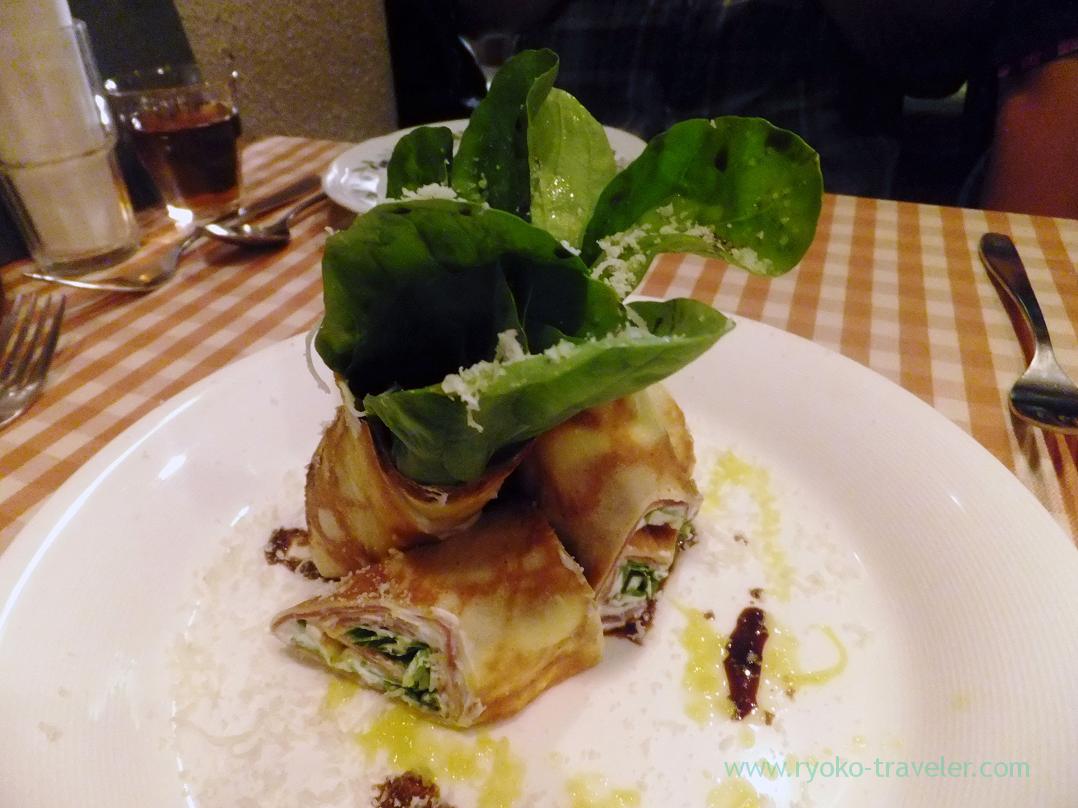 Crepe, cheese and uncured ham was springy. Balsamic vinegar sauce was great. We order every time without fail.
We can eat such a favorite food every time because the menus are not change 😛 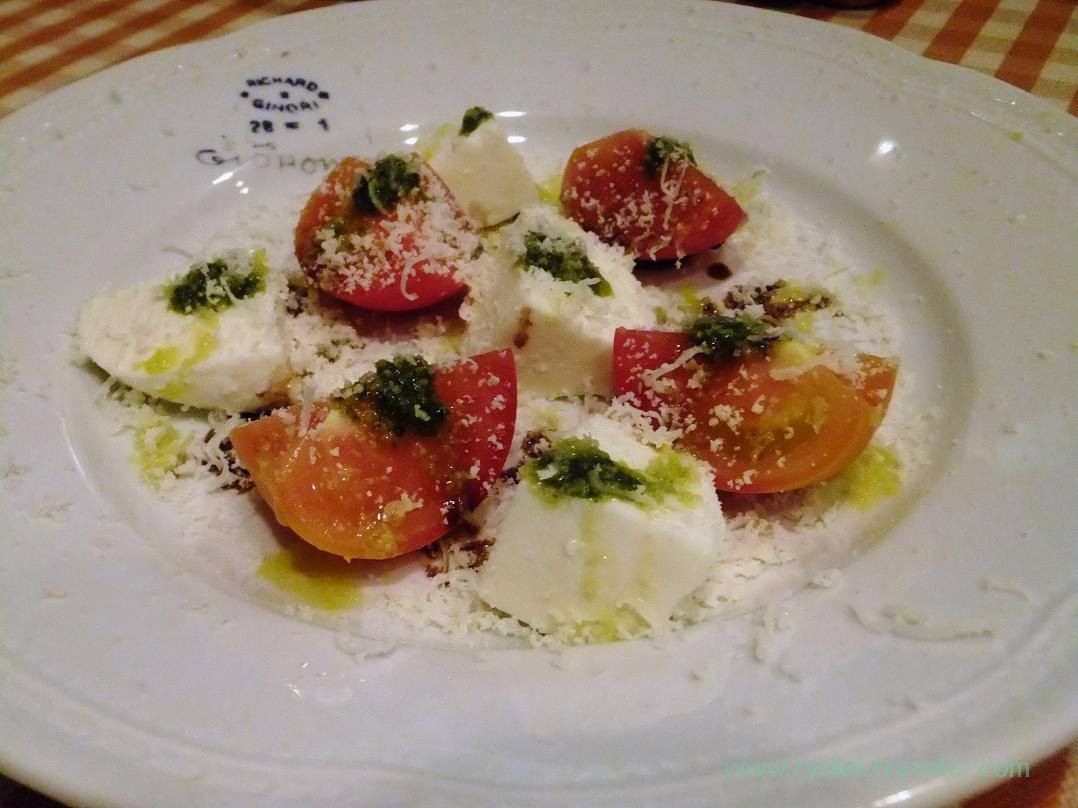 The tomato was sweet and tasty. 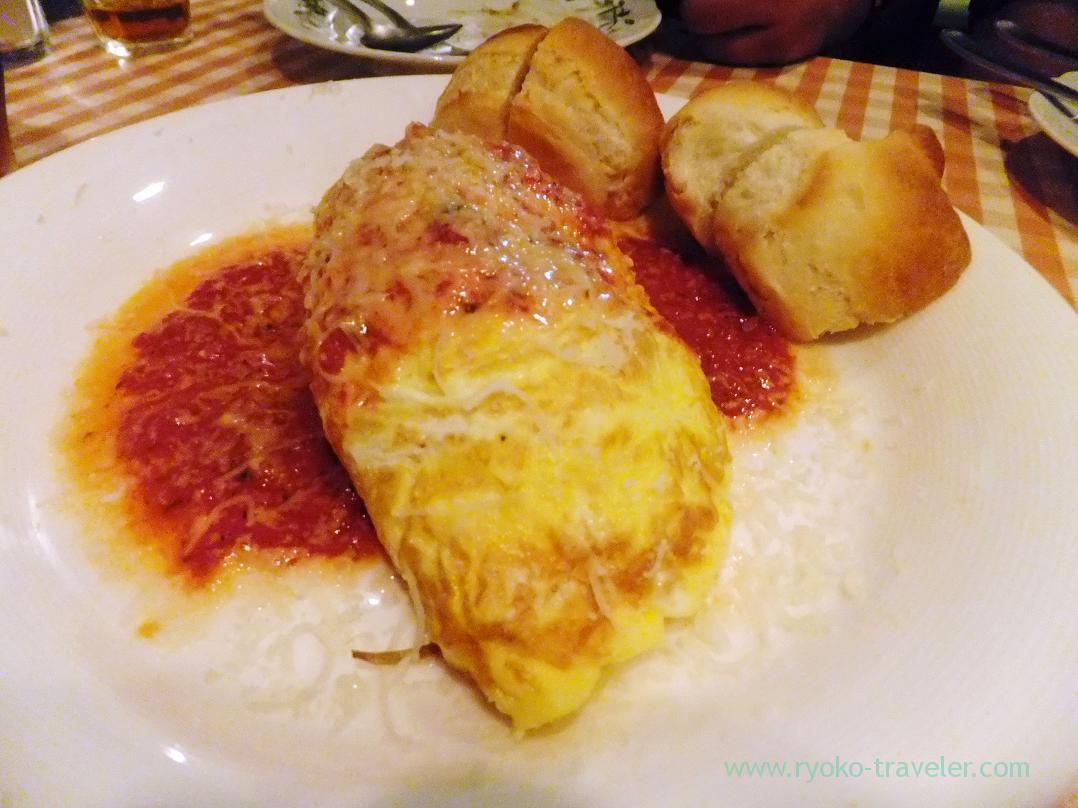 We cut it. Lots of mushrooms in it ! 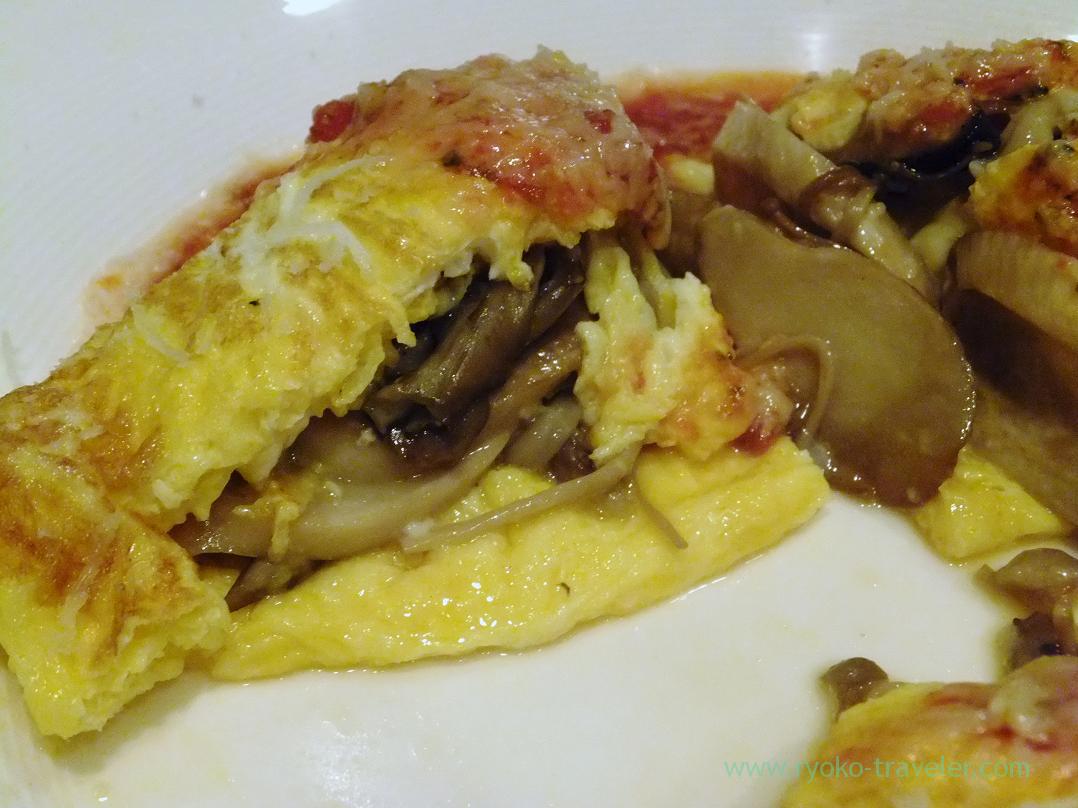 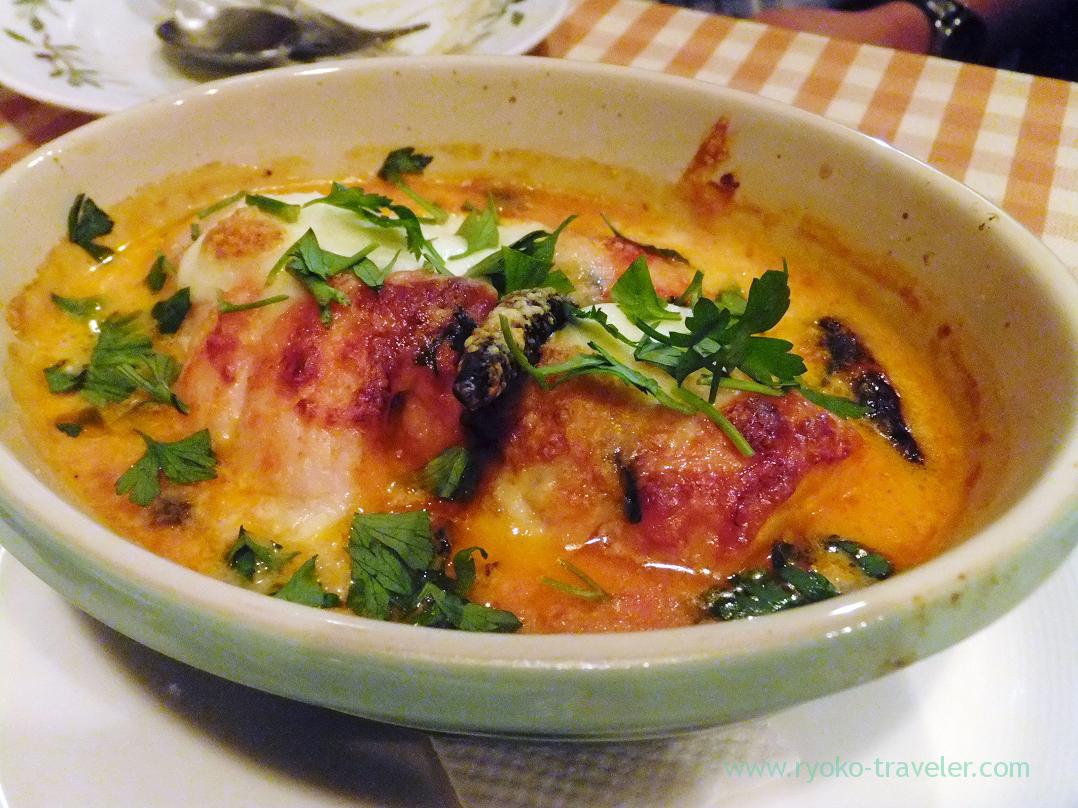 Well, we enjoyed antipasto and entree to the full.
We ordered some spaghetti.
All Yamagishi Shokudou’s pasta is hand made fresh wide pasta.

Here’s lasagna (ラザニア, ? yen). The chef accept only one order each day. 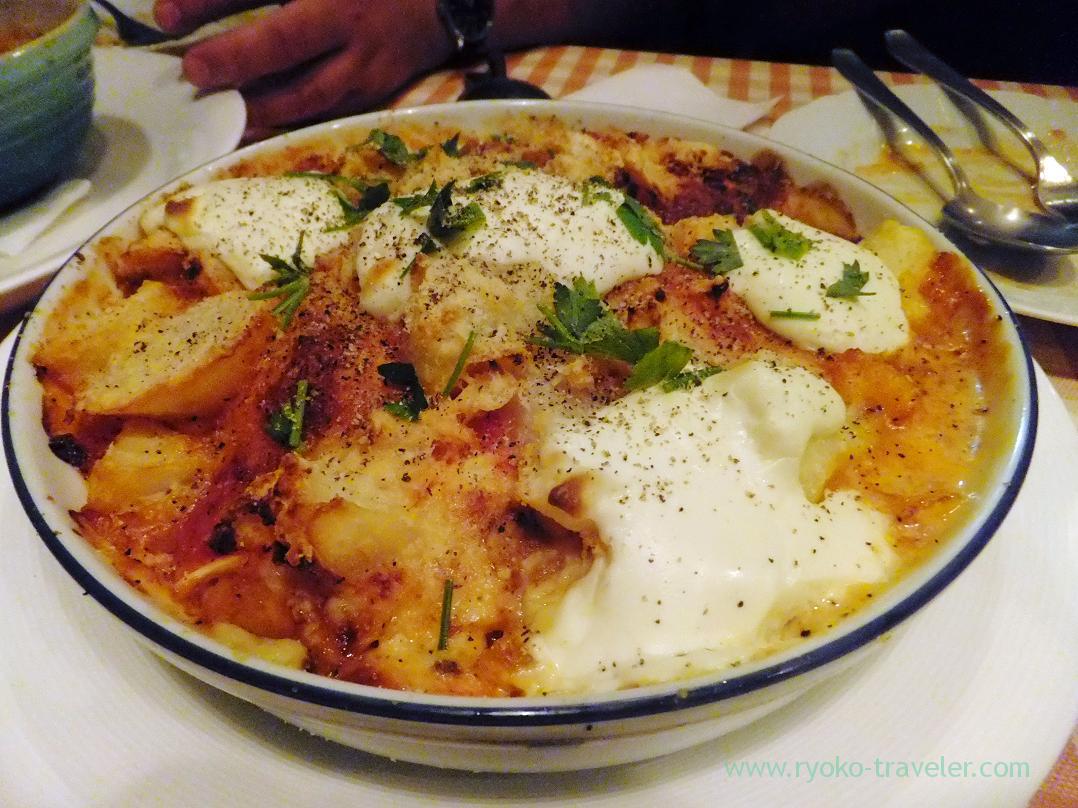 So large gratin.
I guessed that why he don’t accept only one order is because he doesn’t have only one oven. And also there isn’t have enough space to put another oven 😛 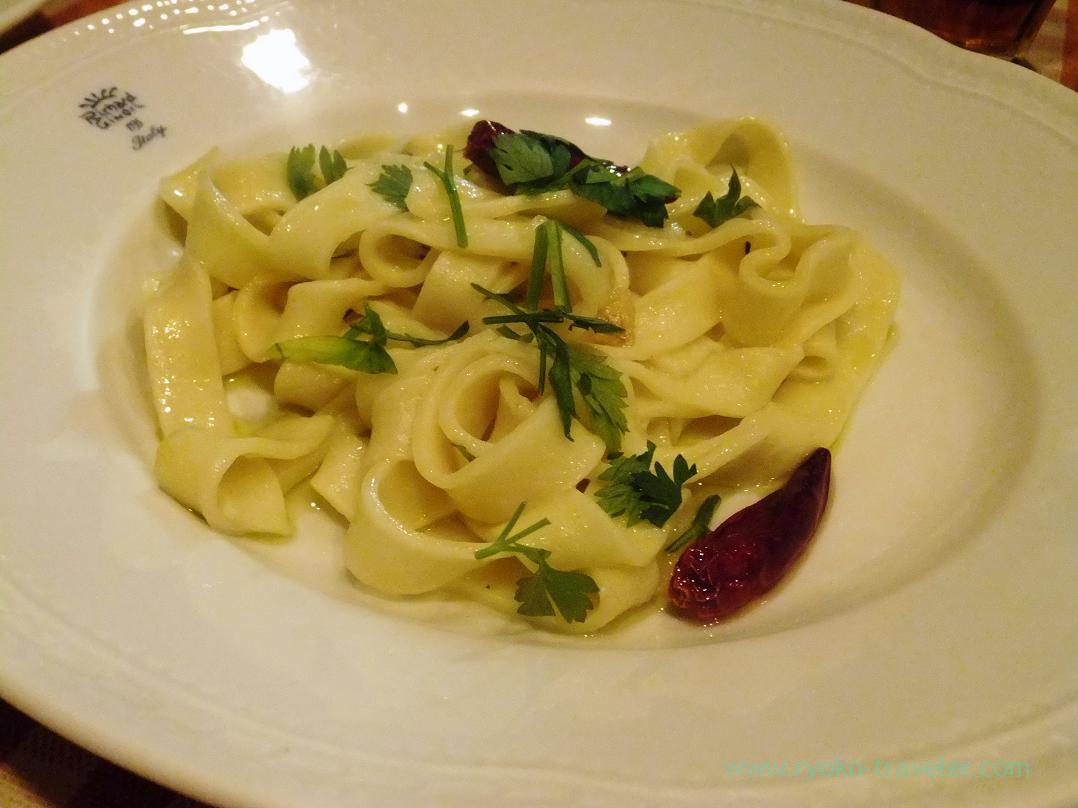 Because it was very simple, I could feel the taste of past very well. 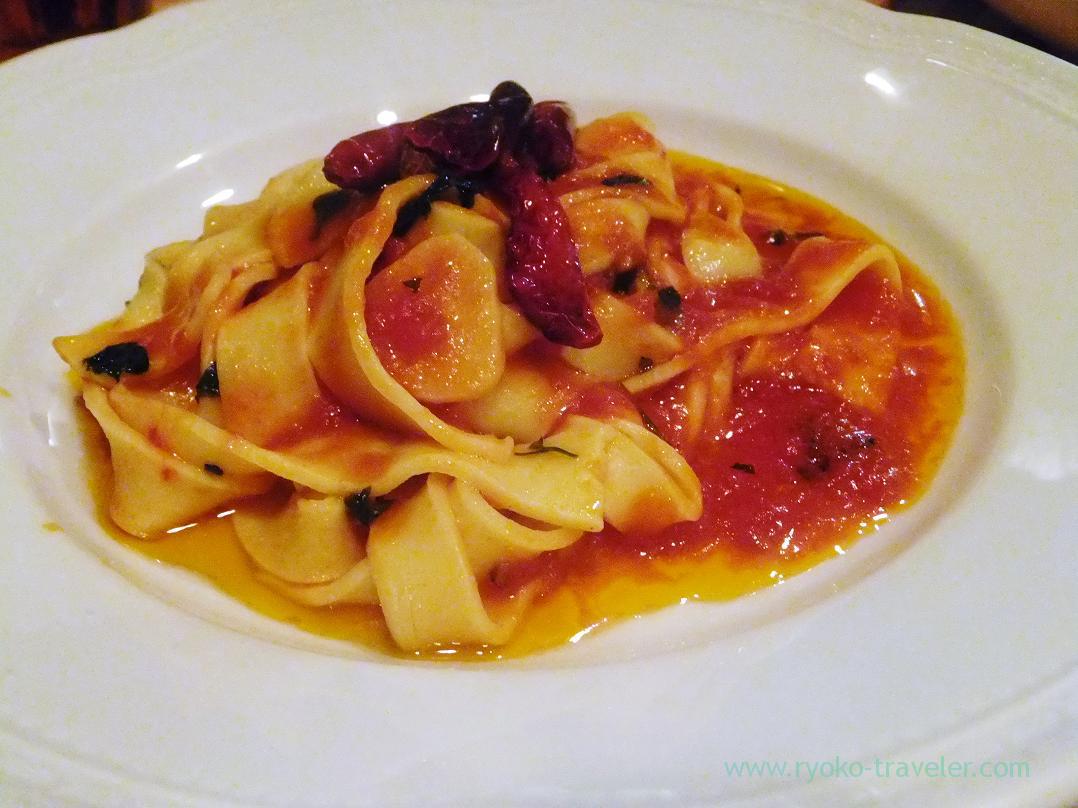 It’s not so spicy. If you want to eat more spicy one, you’d better to eat with chili pepper 😛 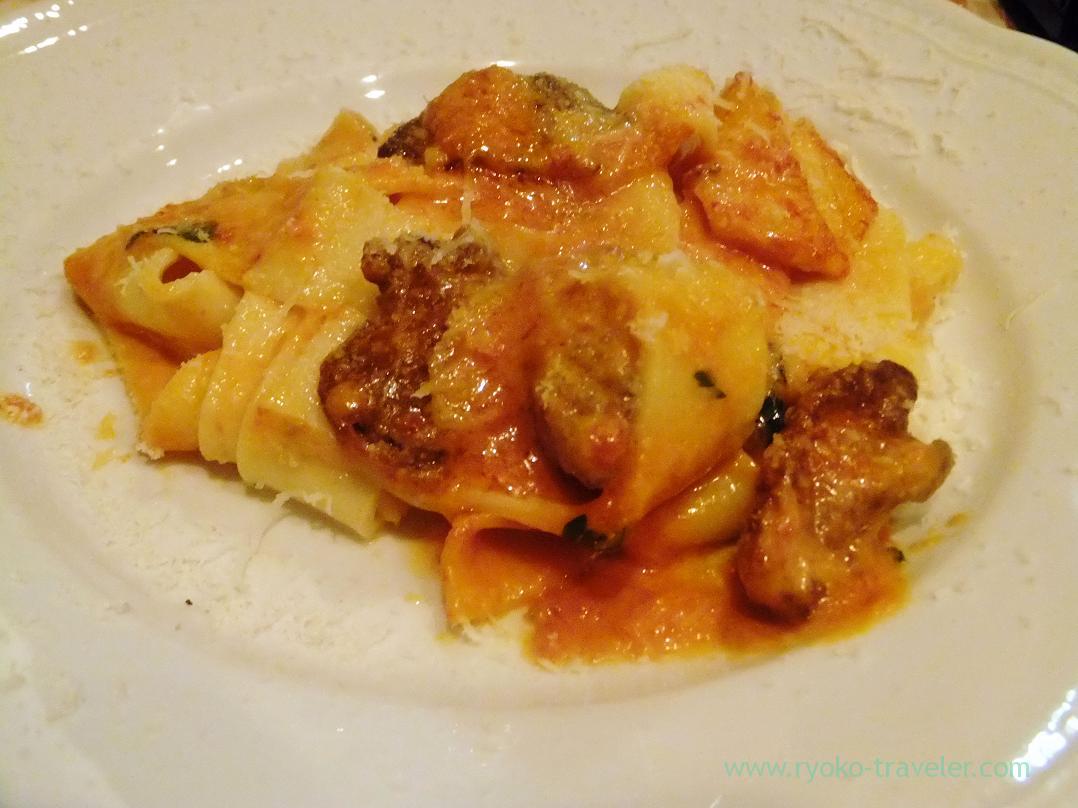 The liver was flavory and tasty…. Very soft.

I got entirely full 😀

But we also ate dessert.
Yamagishi Shokudou serve only one kind of dessert. Mostly he serve panna cotta (パンナコッタ, 500 yen). That day, too.
And sauce, special of the day was put on the panna cotta.
That day’s sauce was … 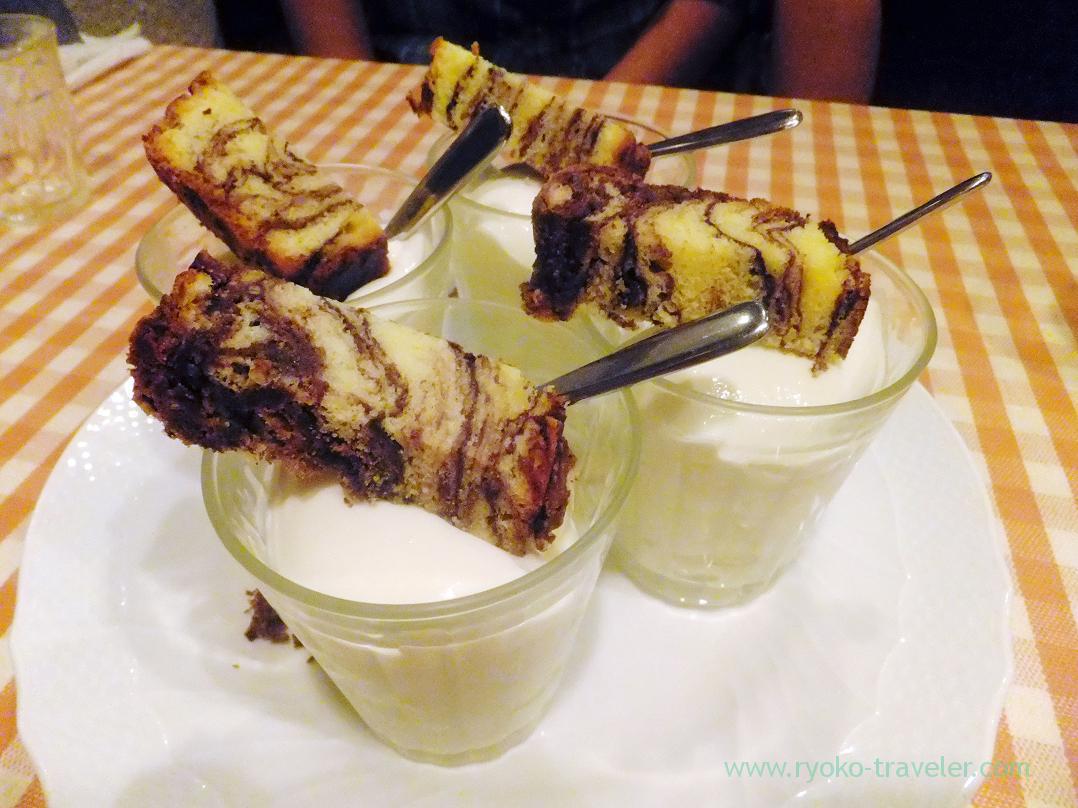 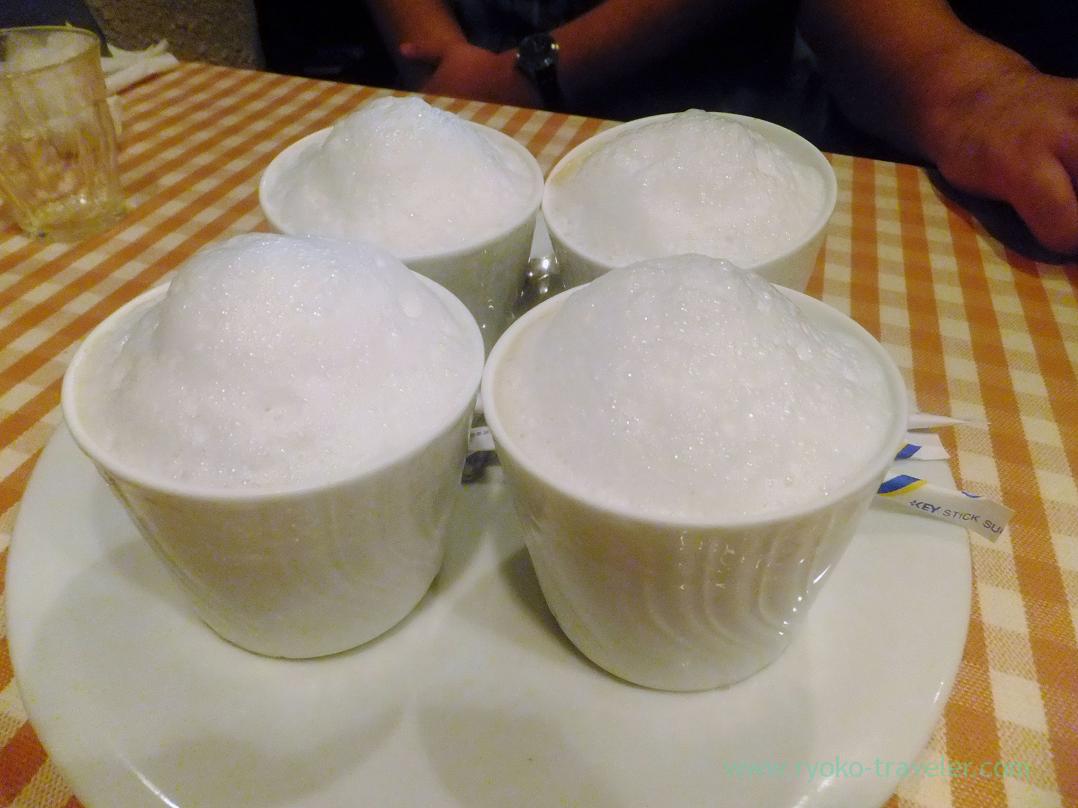 That’s not cappuccino but cuppucchino 😀
When the chef brought it to our table, another group next to us said ” It’s cute :)”

While eating, I heard someone asked the chef whether he could take reservation for next time. But the chef answered no. He also said that he could start accepting next year’s reservation in October all the same.

You think Tsukiji is the best place to eat sashimi bowl ? Certainly, Tsukiji is precious area. But there's also grea...

Long-awaited oyster season has come ! his season has set in. I have been waiting for this season for about 8 months. ...

So much yakitori for my breakfast ! I felt like eating Yonehana's yakitori, so I went to there with my friend :D As...