(This post is sequel of my last post “Eating tour on one Thursday 2/3 : Chaka in Kita-Senjyu”.)
http://www.ryoko-traveler.com/chaka-kita-senjyu1/

We got off at a calm station that is named “Mikawashima”.

It is within a walking distance from Nippori, but contrary to busy Nippori, Mikawashima is quiet.

And Yamadaya stand along a quiet street, a little far from the calm station. 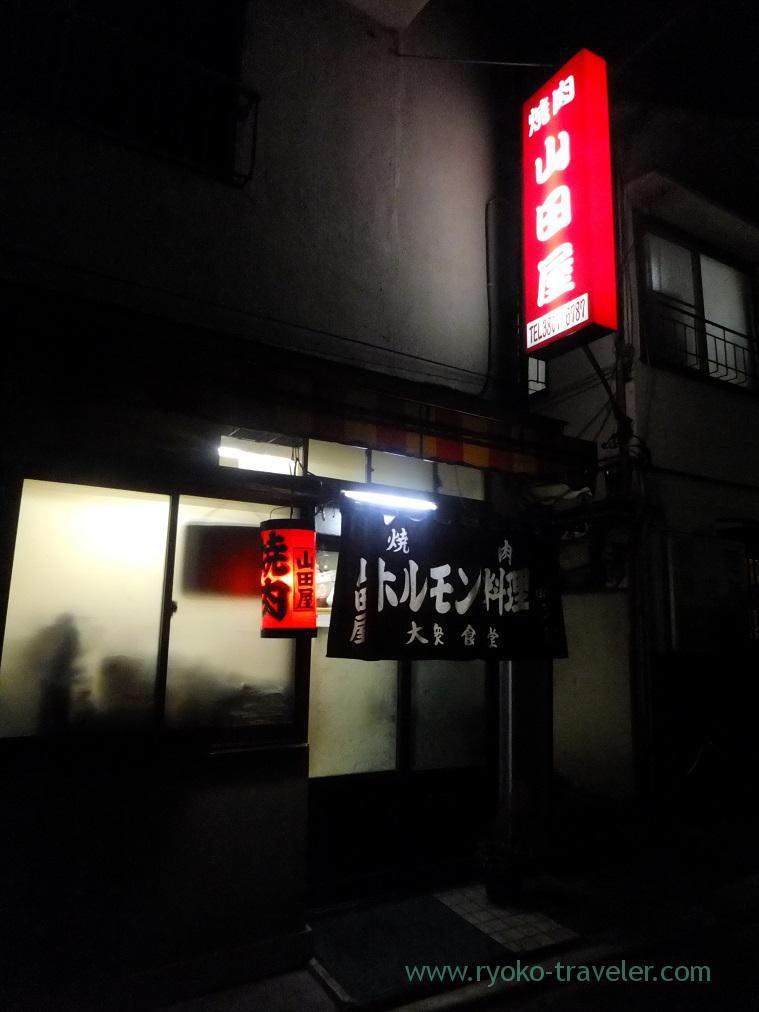 They are good at Yakiniku, especially innards of pigs & cows. 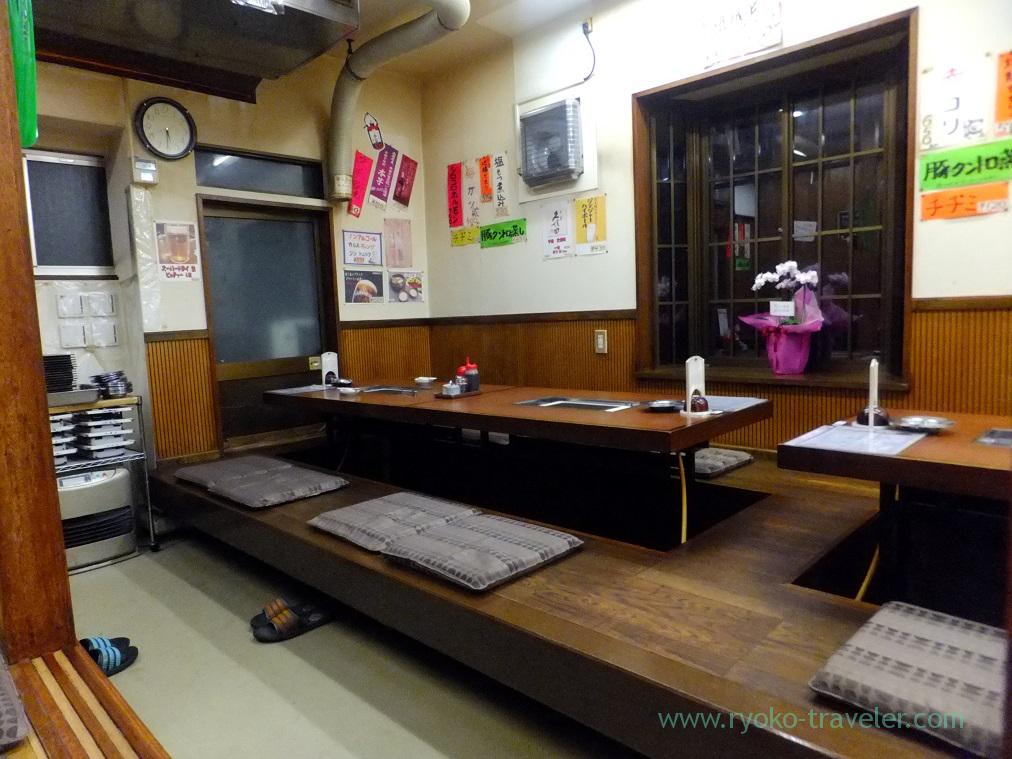 At first my friend and I drunk a toast.
My drink was ginger highball (ジンジャーハイボール, 430 yen) that have a large slice of ginger. 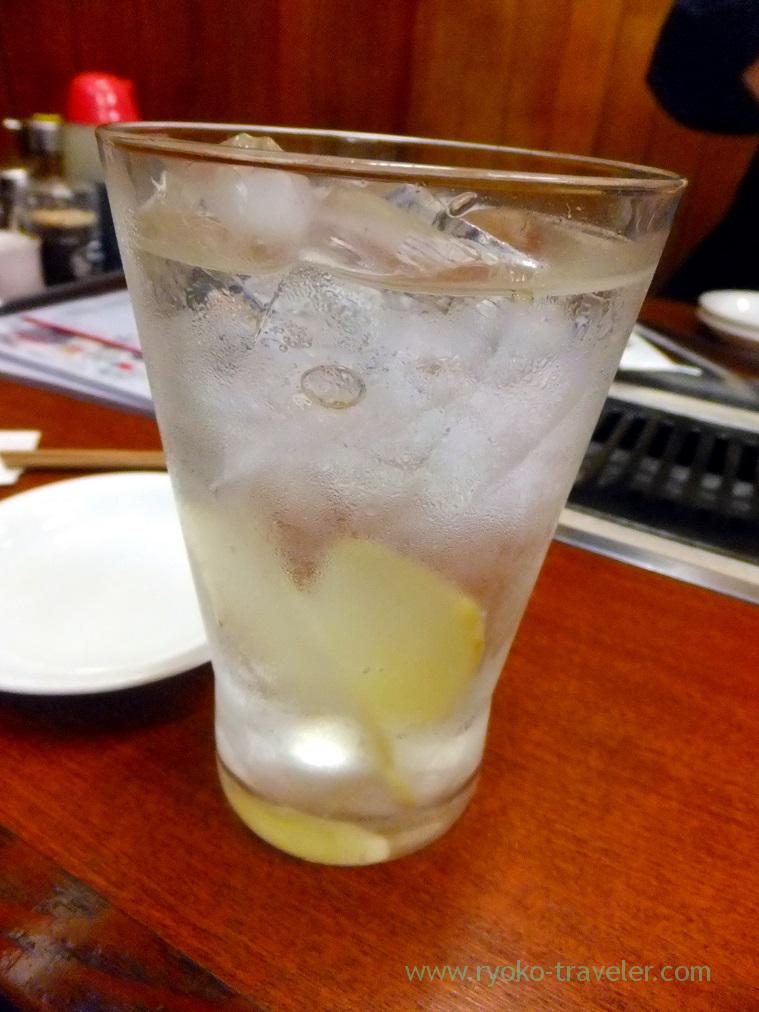 At first, we ordered steamed beef tail (牛テール蒸し, 950 yen) that is very popular among guests. 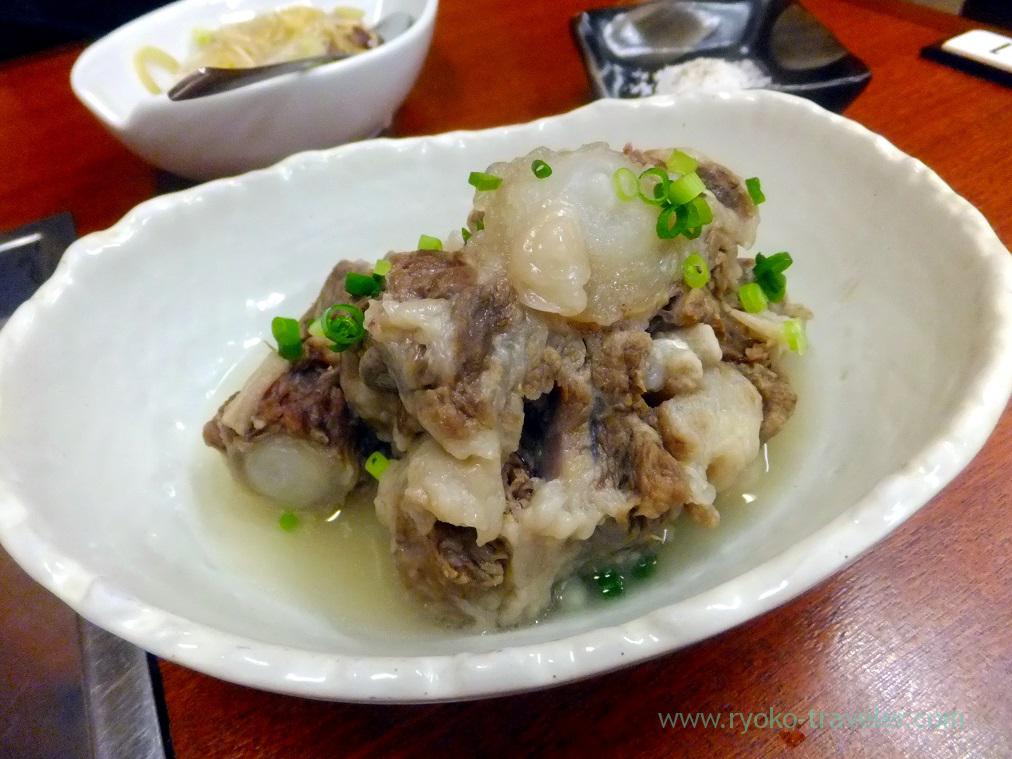 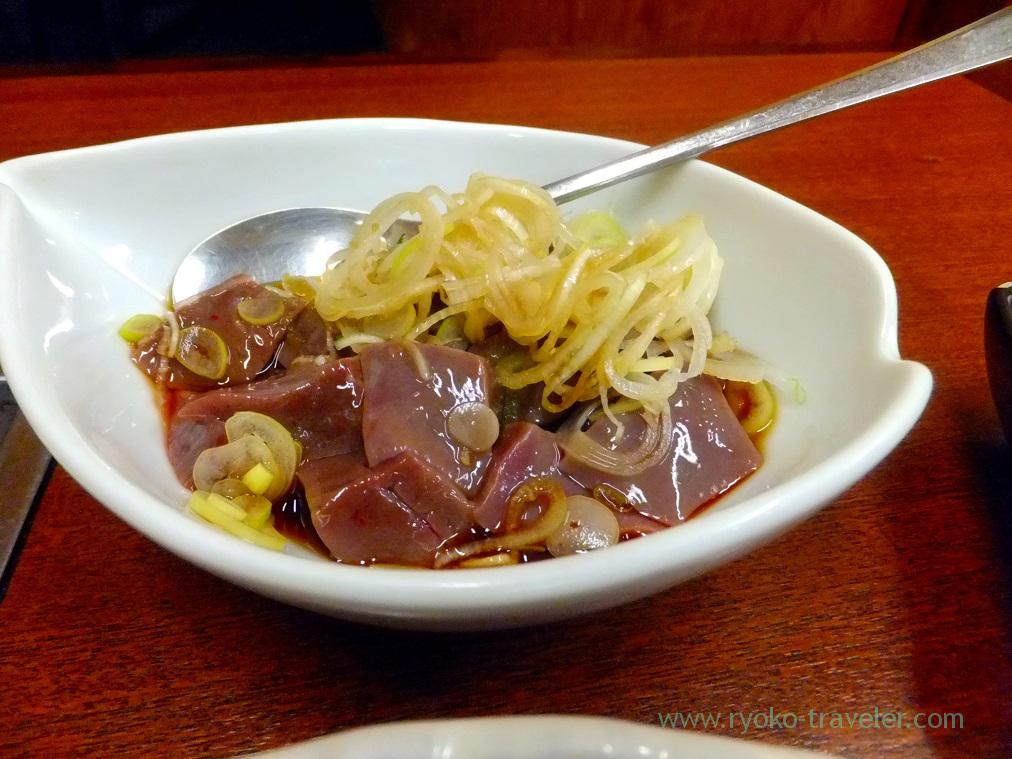 It’s so tasty all the same. 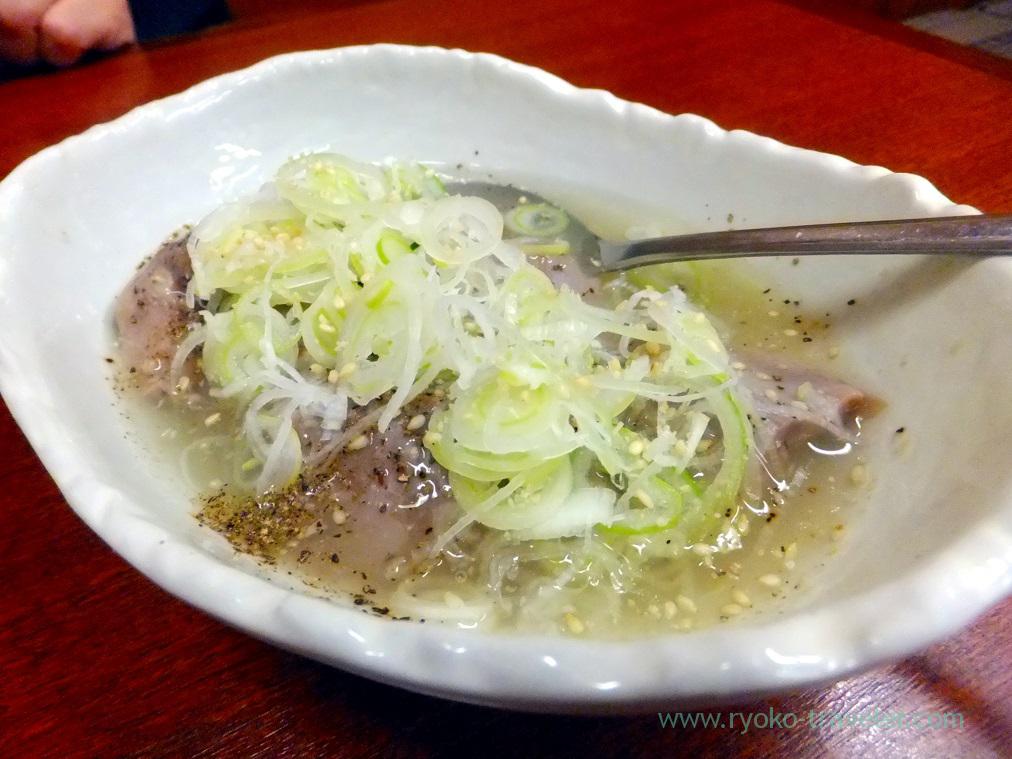 I ate much tongues that day 😛 Pig’s tongue was good, too. As you see, so fatty 😀

After that another friend arrived at the shop. So, I ordered a coke (コーラ, 240 yen) and drunk a toast again. 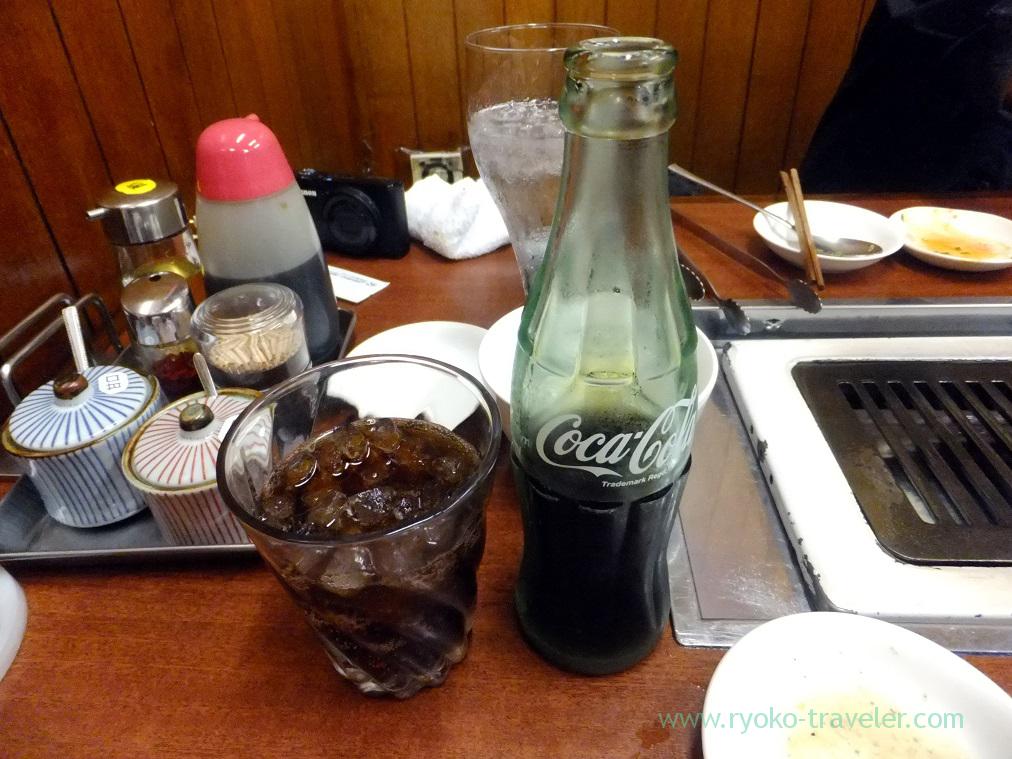 I need coke while eating yakiniku,

We ordered a second helping of steamed beef tail, but it was already sold out 🙁
Alas, I wanted to eat more :O 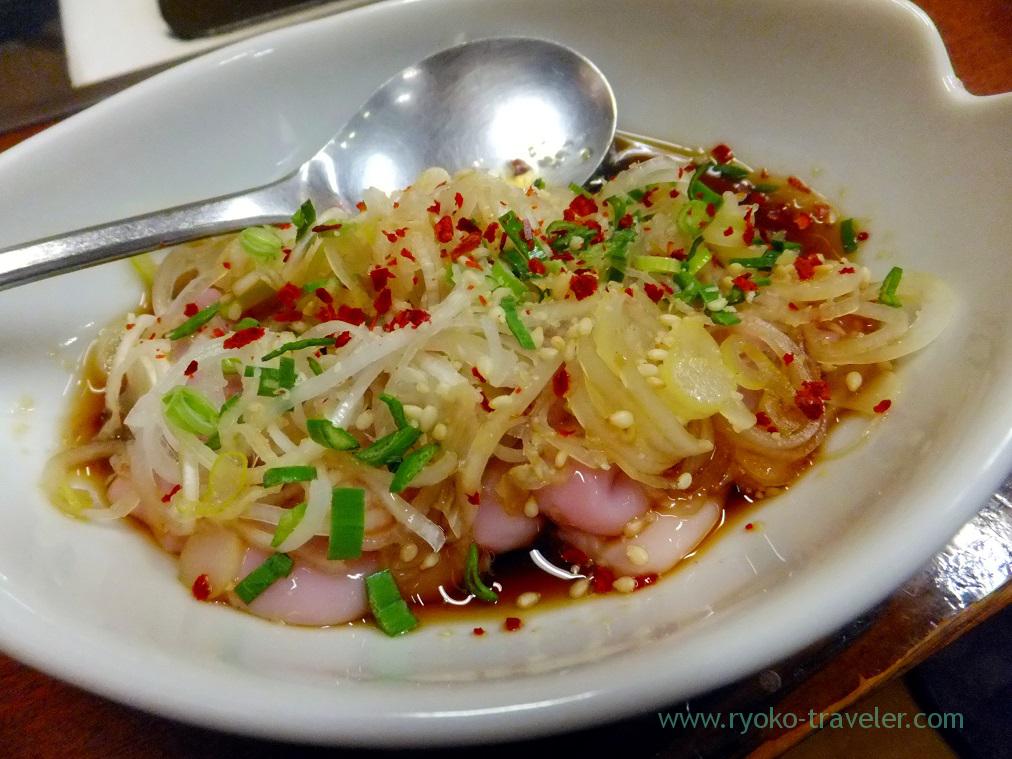 Its texture was funny. And it was fresh and tasty. Lots of green onions and ponzu went with the uterus very well.

After that we started to eat yakiniku. 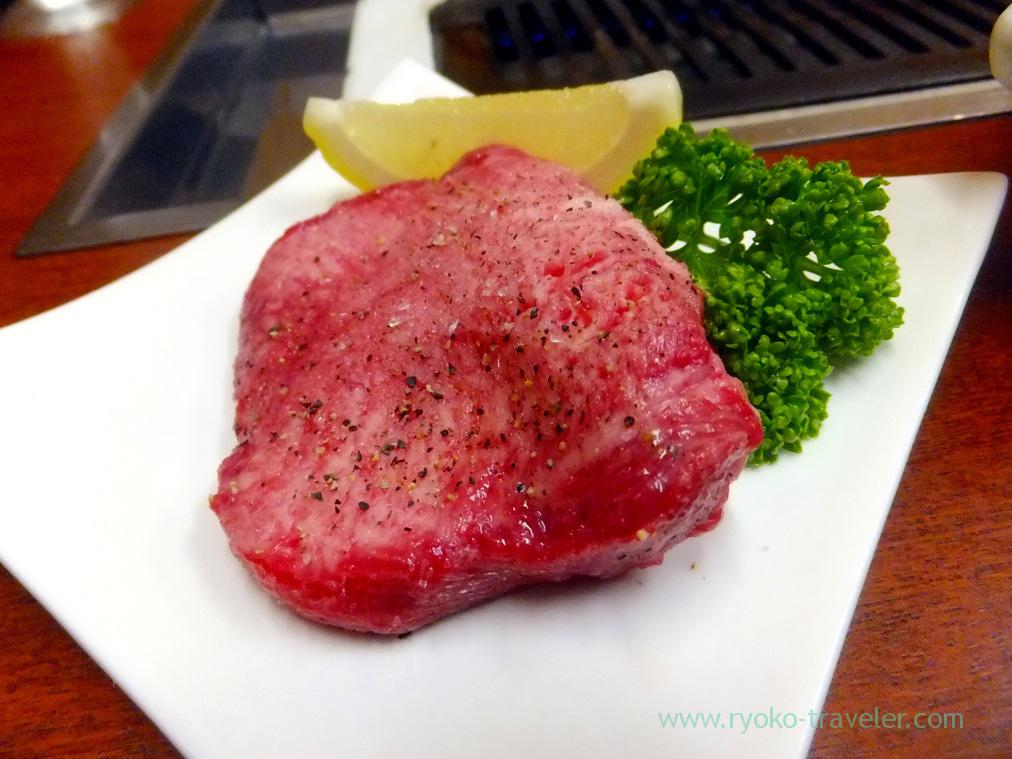 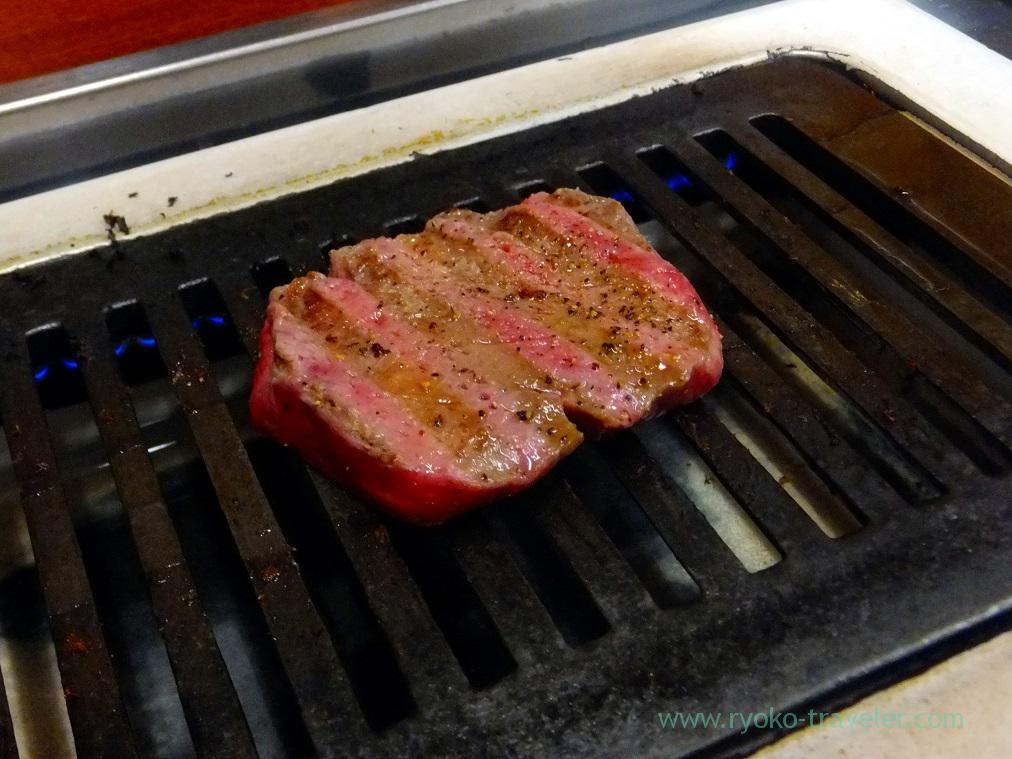 Though it was thick, it was easy to chew ! And so fatty ! 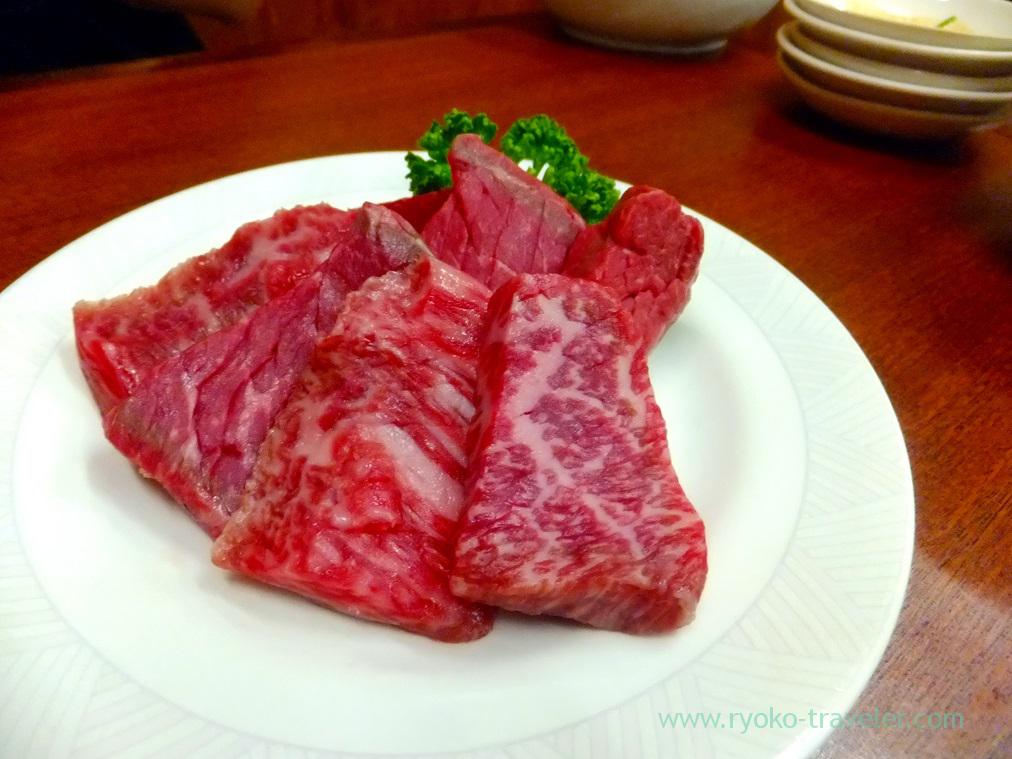 It was not on the regular menu. The name was hanged on the wall as special. So I forgot its price.
The staff said it is aged for 60 days, so I think it must be expensive. Though it is not good expression, aged-beef is just before rotten.
As you see, those didn’t have good color partly. But the more it was chewed, the tastier it became. 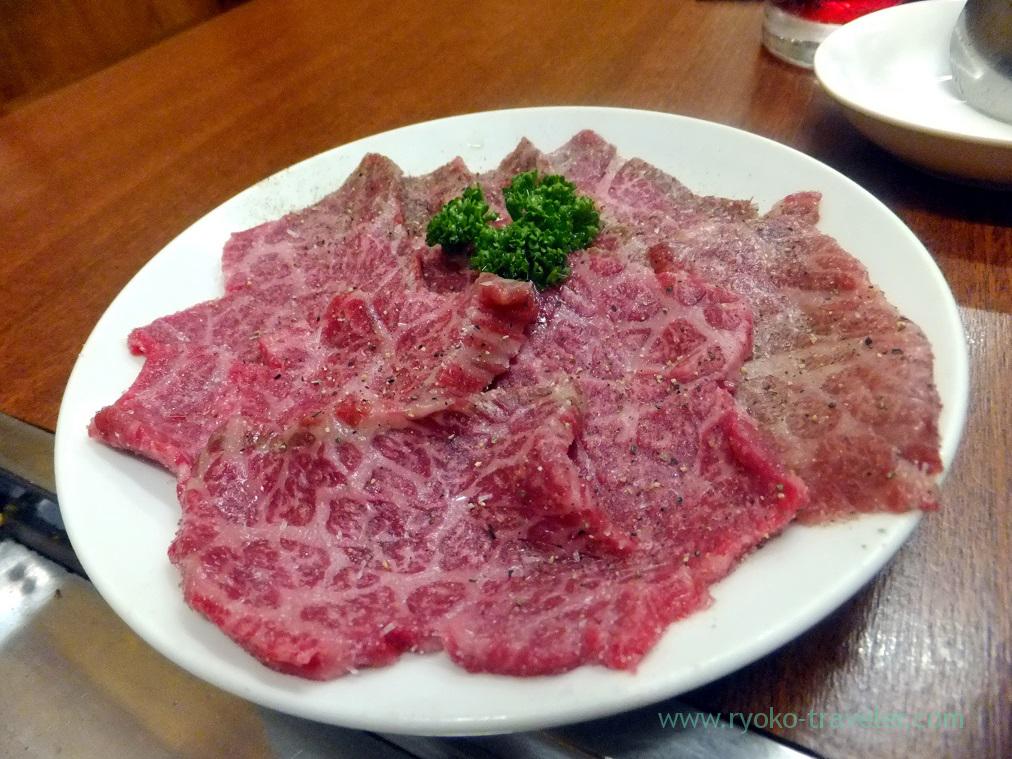 The menu not says it is aged-beef, but it looked like long aged-beef and tasted great. 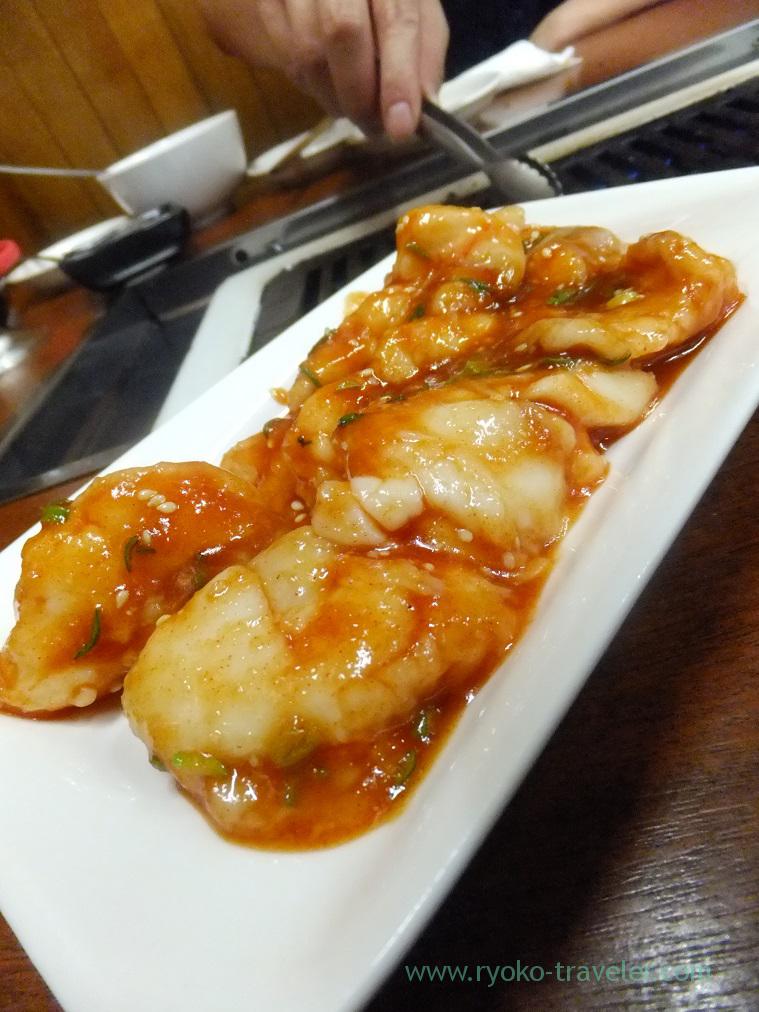 That’s mass of fat !
We are thirties and forties, so it’s hard to eat the mass of fats up 🙁
When we were in teenagers, we must have eaten it greedily… 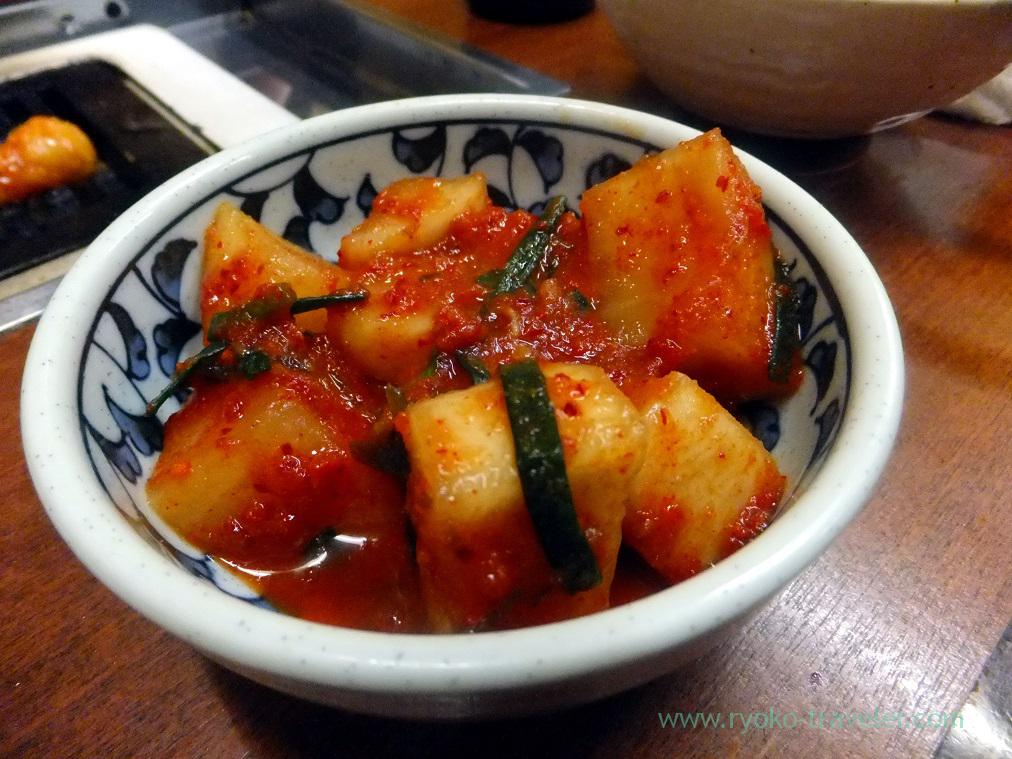 Much fatty meats made the inside of our mouth sticky, so we ordered a kimchi. 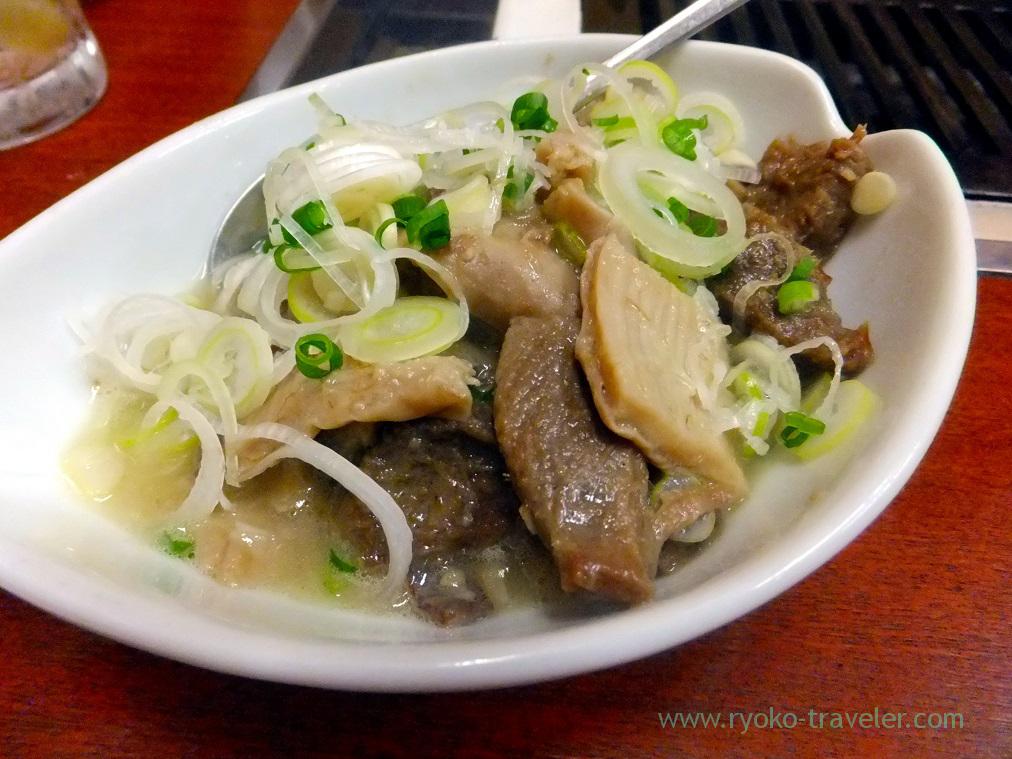 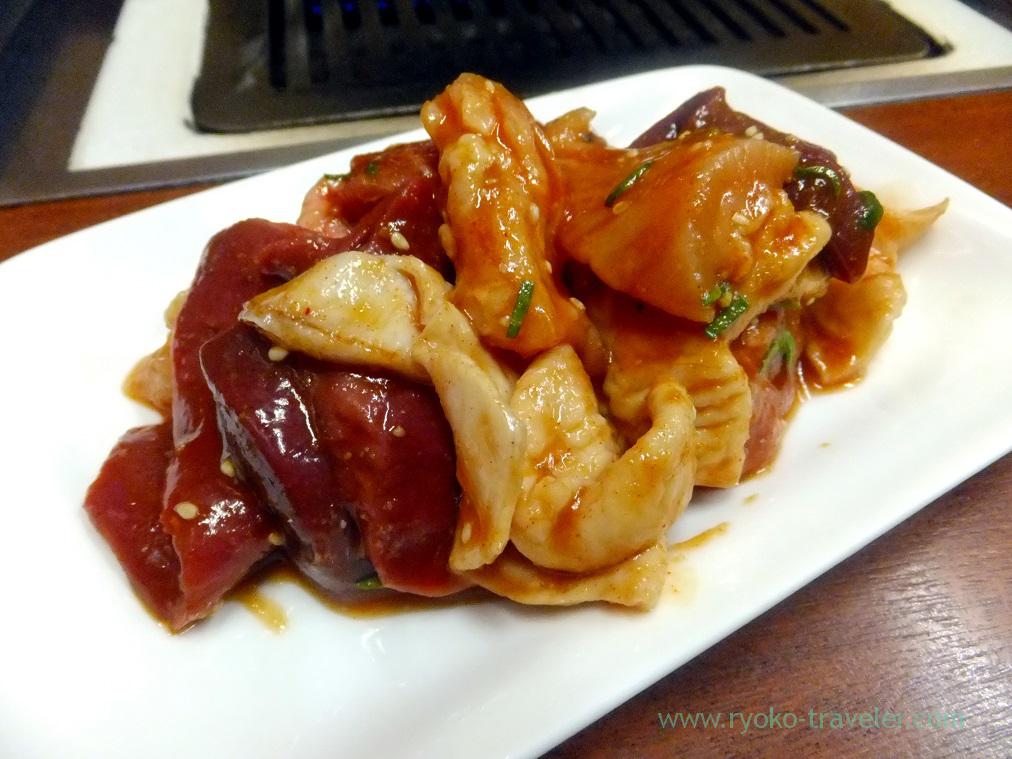 Some parts of cows’ innards were on the dish randomly. 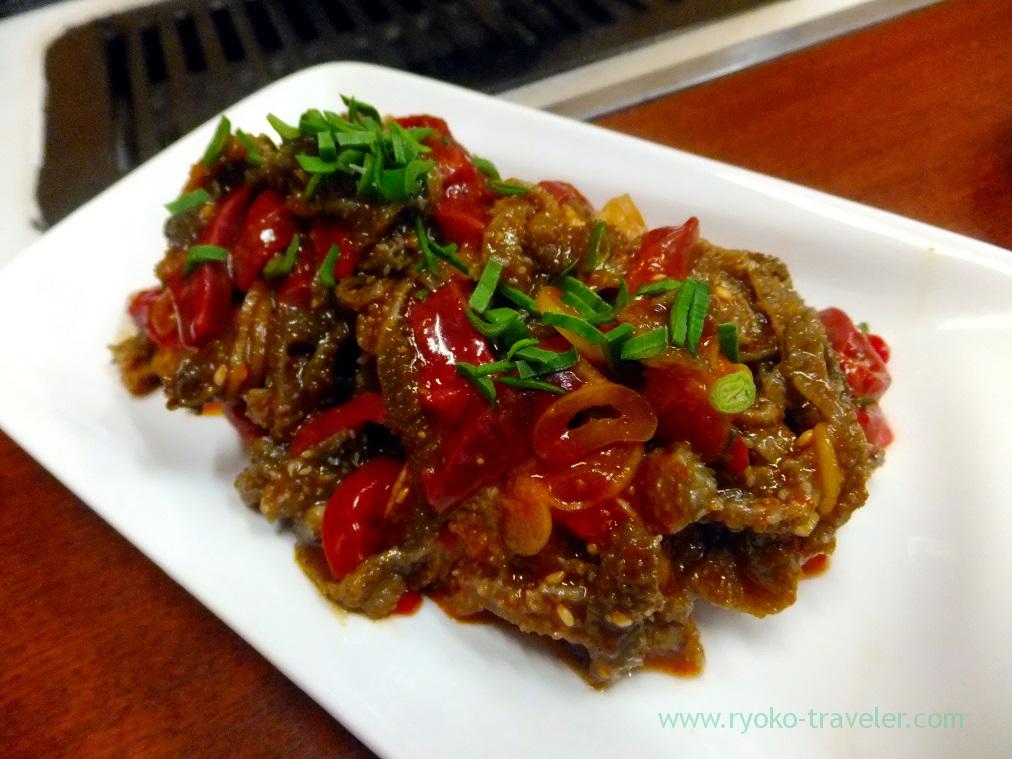 Beef spleen and reticulum were mixed together.We had to eat soon because the water of the reticulum got out of it sooner. 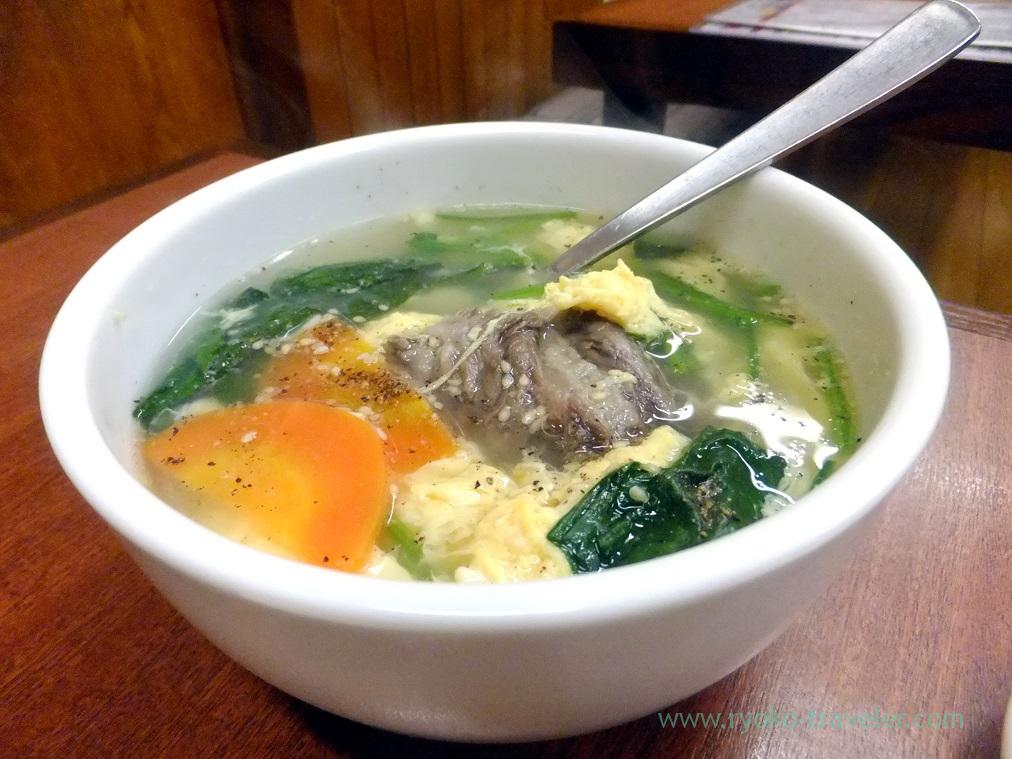 There is a North-Italian cuisine restaurant in the SHISEIDO building, Ginza. I had a plan to have time at the restauran...

Cozy house serve standard Japanese meals There are still so many lunch spots that I haven't visited yet around my offic...

Snow fell in Tokyo this morning. I expected Tsukiji Market don't have much people than usual on such a cold snowy...

Year-end Tsukiji have great number of people ! My first eat out to Tsukiji 2013 was At Yonehana This was Decembe...

One of the popular sushi restaurant located in Roppongi who won the single star of Michellin recommended us to visit Ta...