And I found the signboard of Nakaoyama Tumulus. I didn’t know about the tumulus well, but I decided to go to see the tumulus. 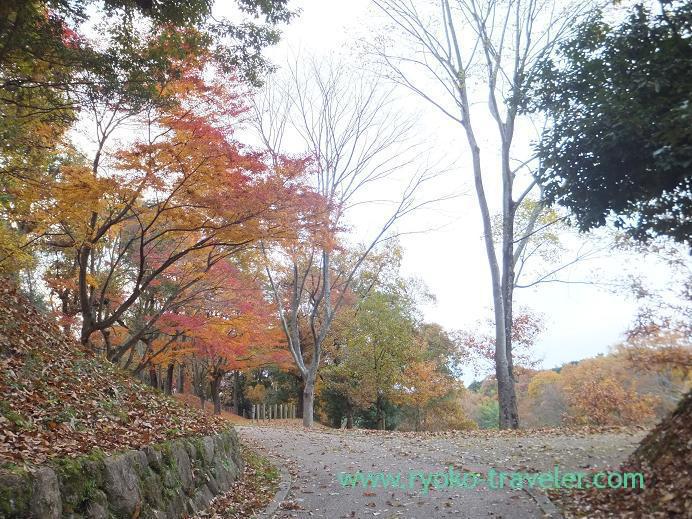 It started to rain and it got heavier. So I took shelter from rain under the autumn leaves on my way to Nakaoyama Tumulus 🙂 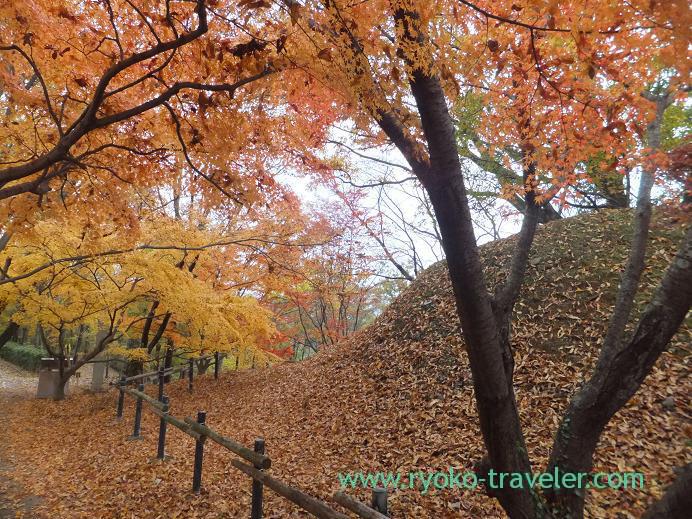 Nakaoyama Tumulus (中尾山古墳)
It is said to be a tumulus of Emperor Monmu. 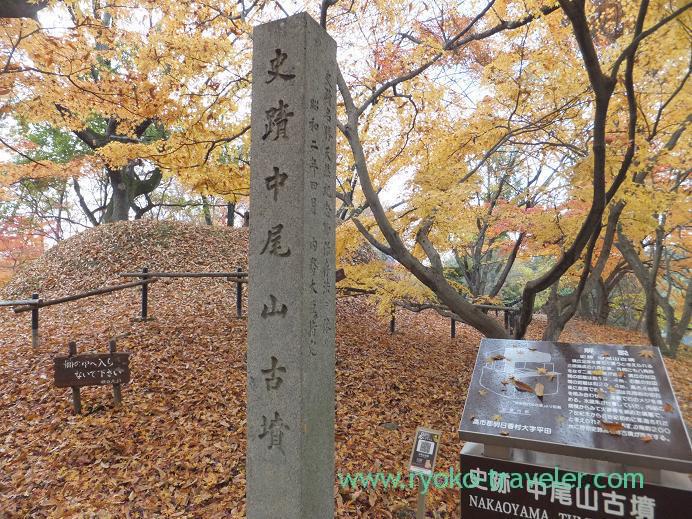 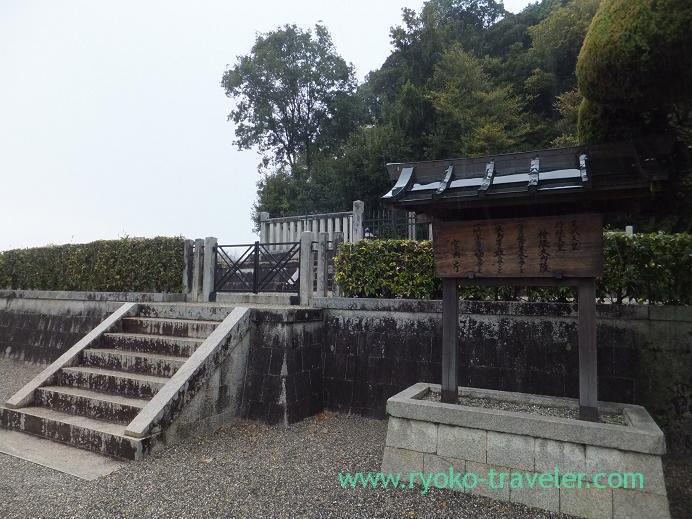 It is under the supervision of the Imperial House Agency. 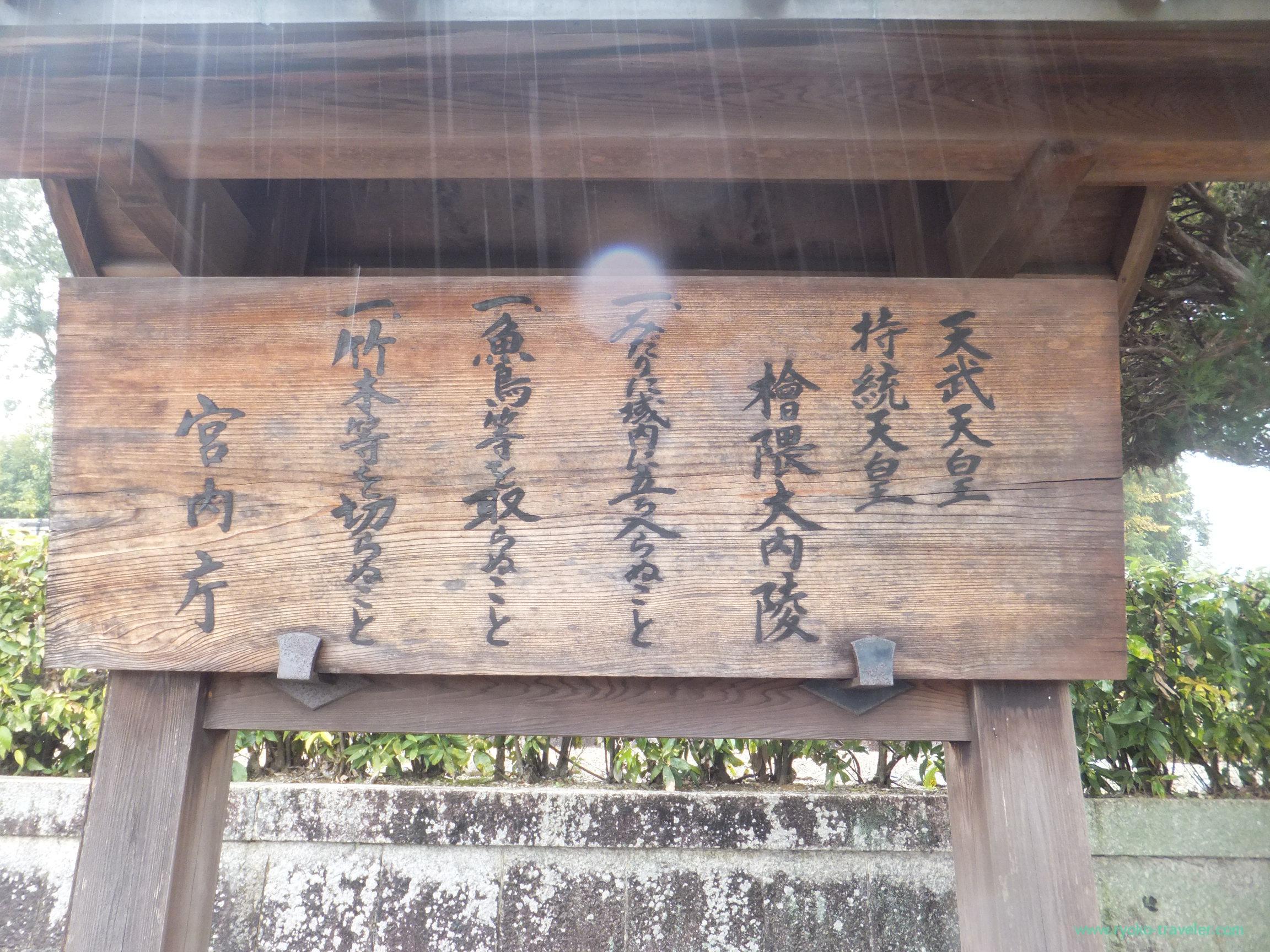 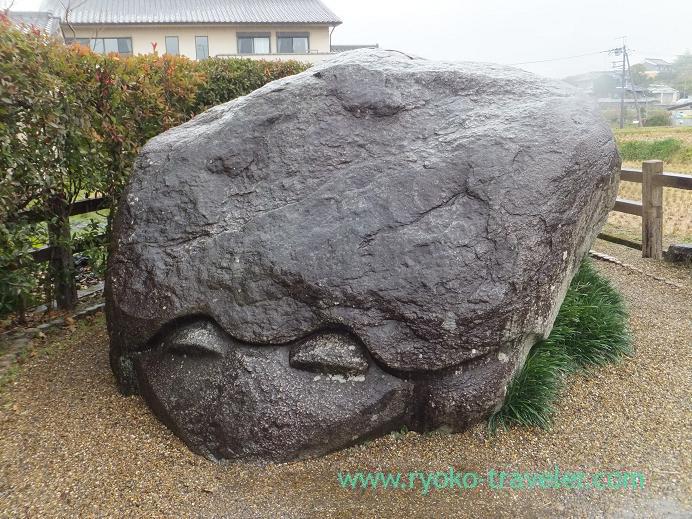 The tortoise looks happy, but there is a sad legend about tortoise.
When the area around Nara Basin was a lake, in a battle between the snakes in Taima(当麻) on the opposite shore and the catfish in Kawahara(川原), sucked the water by Taima caused Kawahara area to be dried up and all the turtle in the lake to be killed. It is said that villagers who pitied the turtles built ‘Kameishi’ for the repose of their souls.
They say Kameishi formerly faced north and then east. Now it faces southeast, and legend says that if it faces west and stares at Taima, Nara Basin would be a sea of mud.

The rain became heavier on my way to Kawaharadera temple.
I kept walking being beaten by heavy rain and I felt like crying.

But a woman on her bicycle stopped me and she gave me her umbrella. She had two umbrellas. She gave me the one. And I felt like crying again. With thankfully. 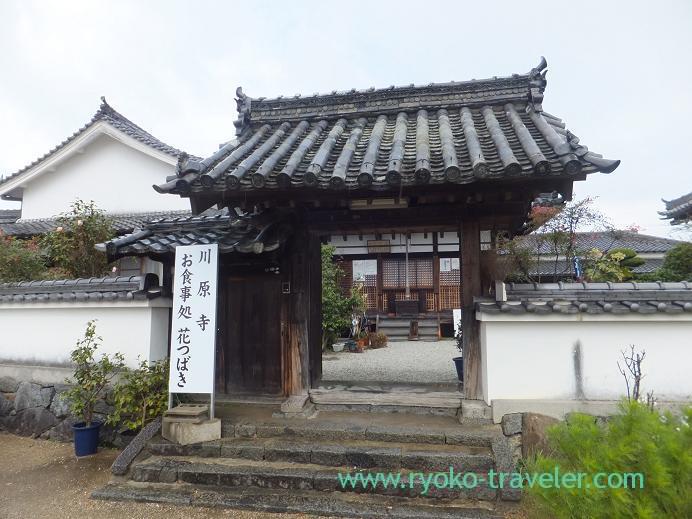 This temple is associated with Kobo-Daishi(弘法大師). 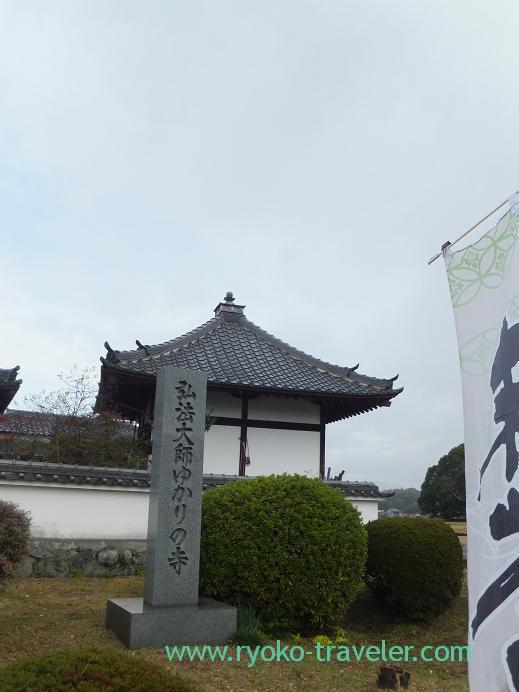 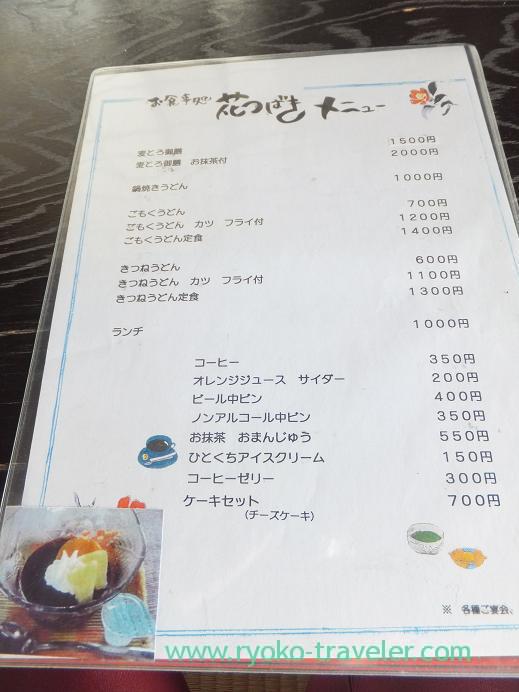 I intended to eat Nabeyaki-Udon (noodles served hot in a pan) because I felt chill.
But I found the word “Lunch (ランチ)” in the menus.
So, I asked the waitress about “Lunch”.
She said it is a special of the day and serving deep fried foods that day .
I felt like eating a special of the day ,not routine dishes. And I ordered a “Lunch”. 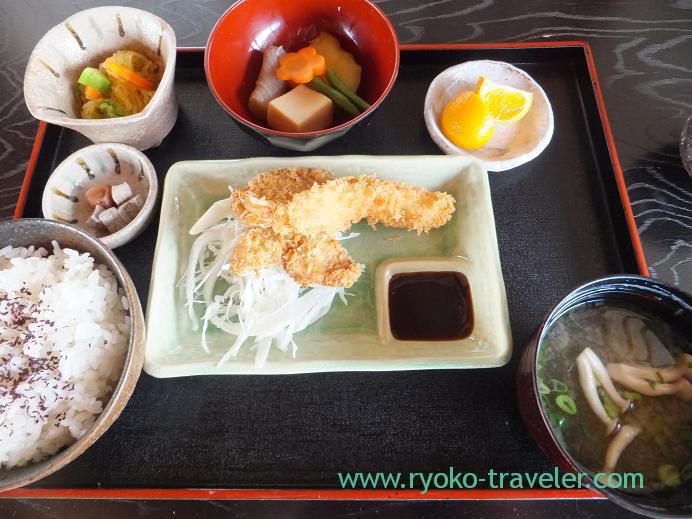 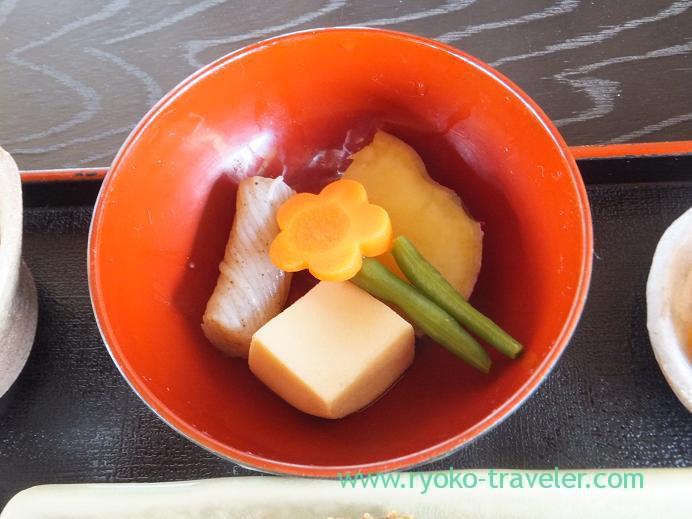 Truthfully speaking, it was not good. But I was satisfied with having lunch in the temple’s facilities 🙂 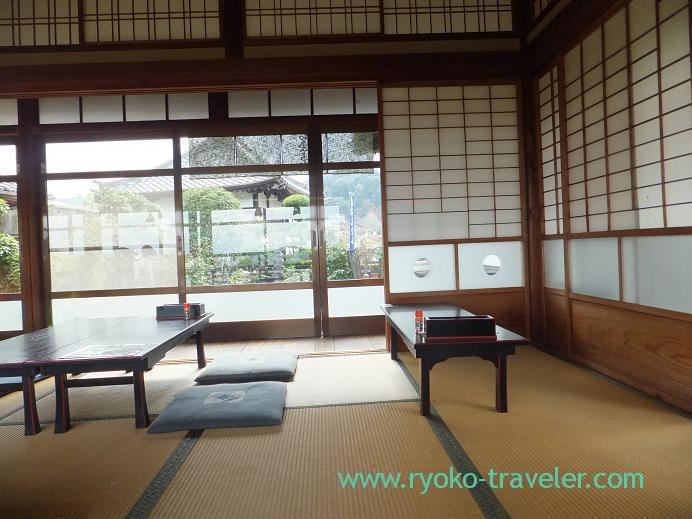 It stopped raining by the time when I left the temple. 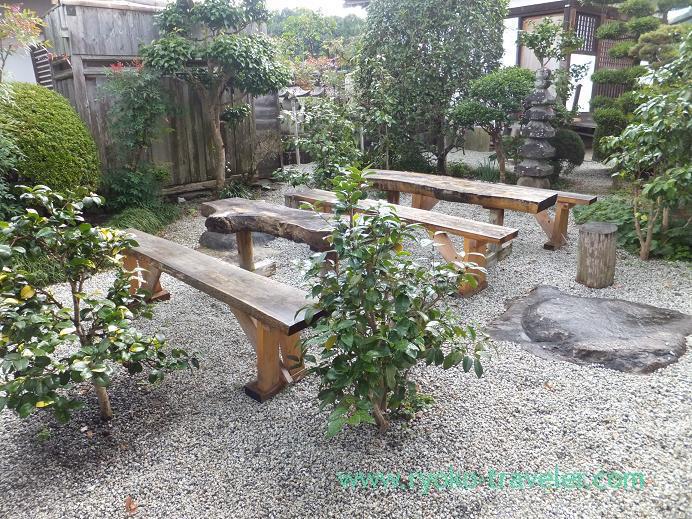 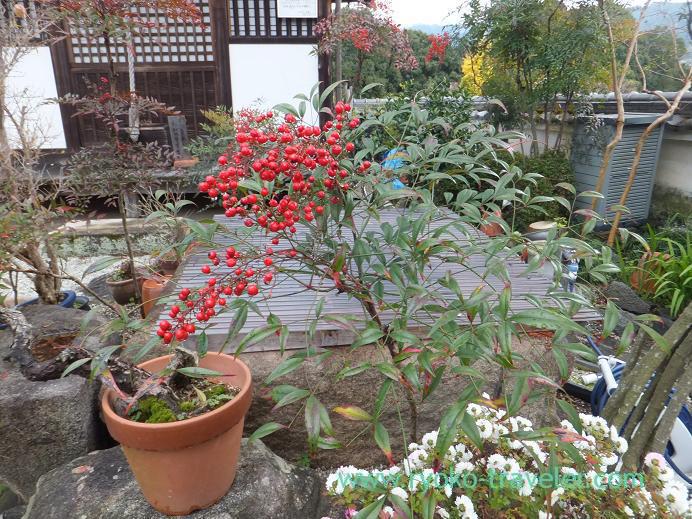 After getting out of the temple,  I went to Tachibanadera Temple (橘寺) across the street.

Trip to Nara 2012 Autumn, the 2nd night meal and the next morning’s breakfast.

I arrived at Nara station around 7p.m. I felt chill. I wanted to buy kakinohazushi for my night meal. "Kakinoha" mean pe...

This is continuation of my travel diary at Russia in this summer.(I want to finish writing about the travel before the y...