My hotel gave me a breakfast ticket of Yoshinoya near the hotel (Included in the fee). So, I dropped in at the Yoshinoya branch and ate grilled salmon set at Yoshinoya on my way to Takamatsu station 🙂

After 20 minutes walk, I got to Takamatsu station and left my baggage into the locker in the station. And then I headed to Tamamo garden. 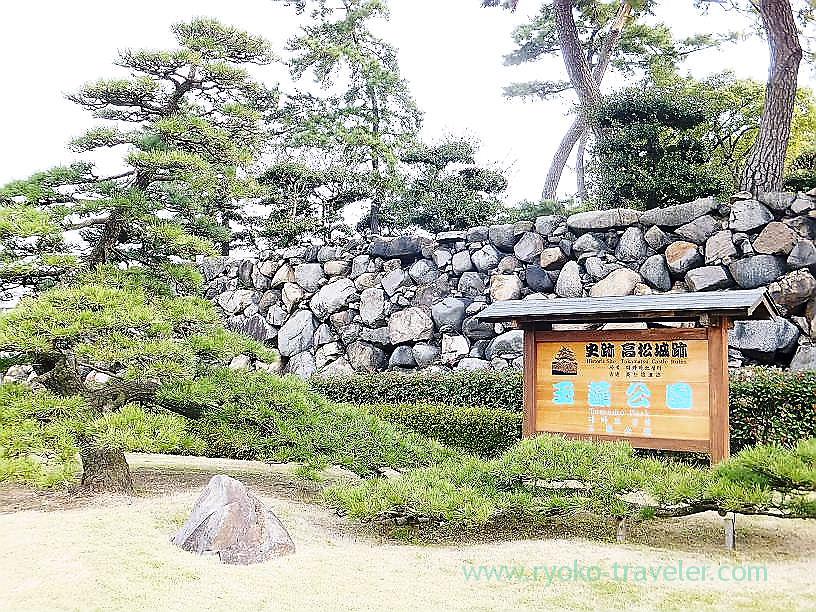 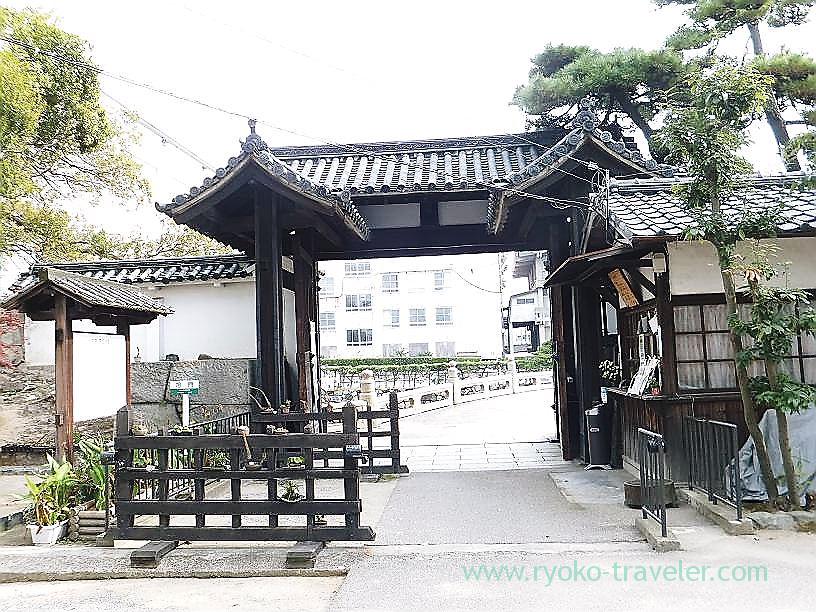 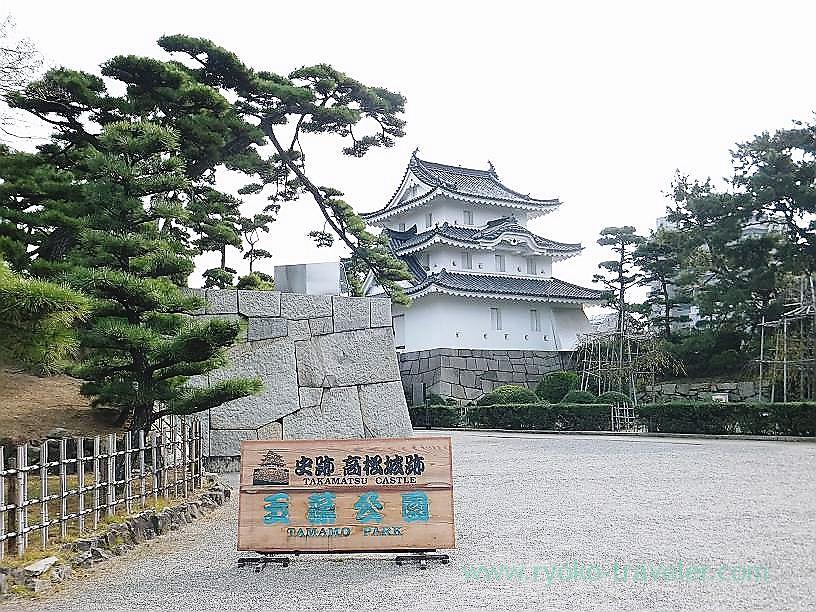 Though its official name is Takamatsu castle, it is also called Tamamo castle.
It is because around sea of this area used to be called “Tamamo no ura” in ancient times.

by digging ditches double and triple
The castle used to be surrounded by triple moats. The castle wall was faced with Setonaikai (Seto Inland sea) directly and outer, middle and inner moat have sea water drawn from the sea.
This is the first sea castle in Japan.

It is said that feeding those carps make your wishes come true. 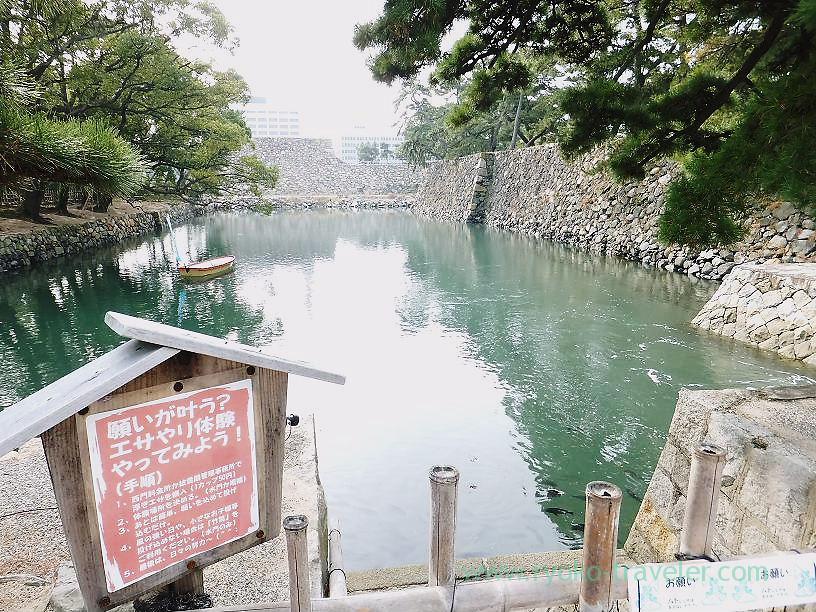 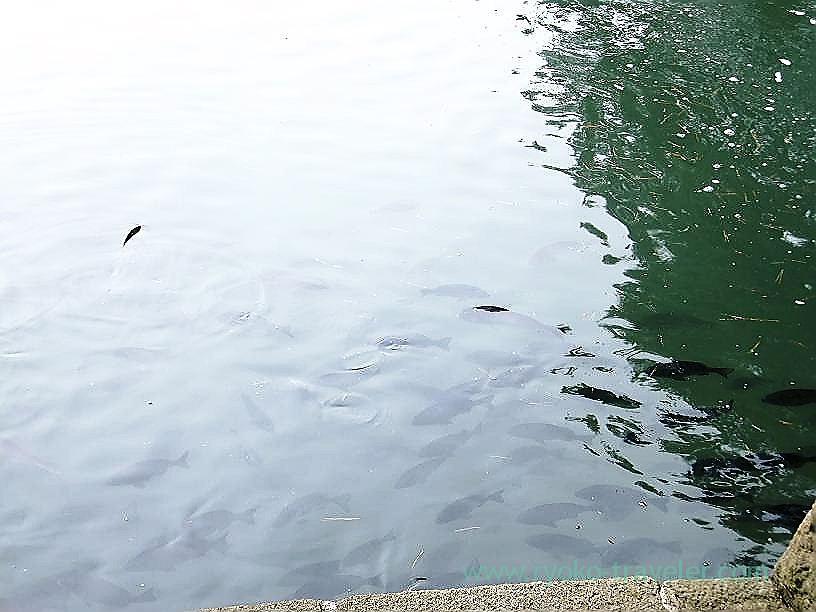 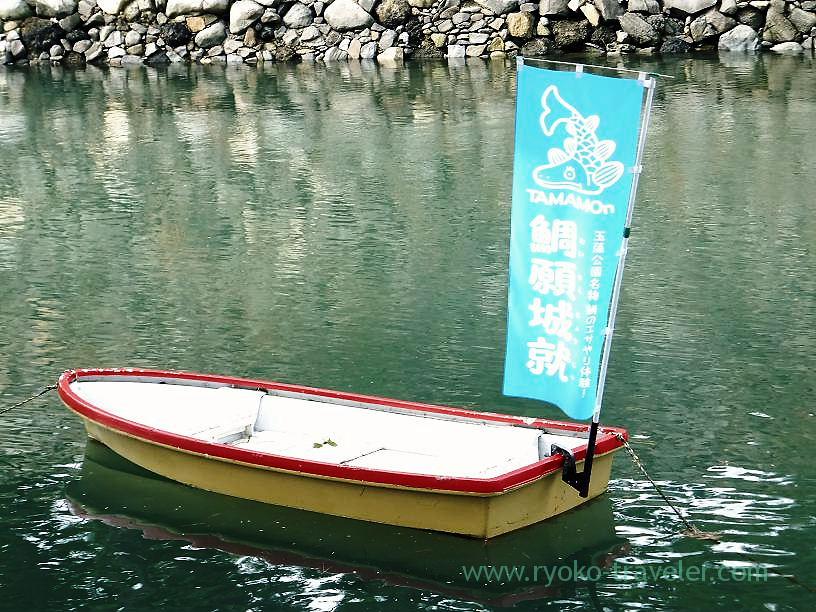 What happened to this tree ? 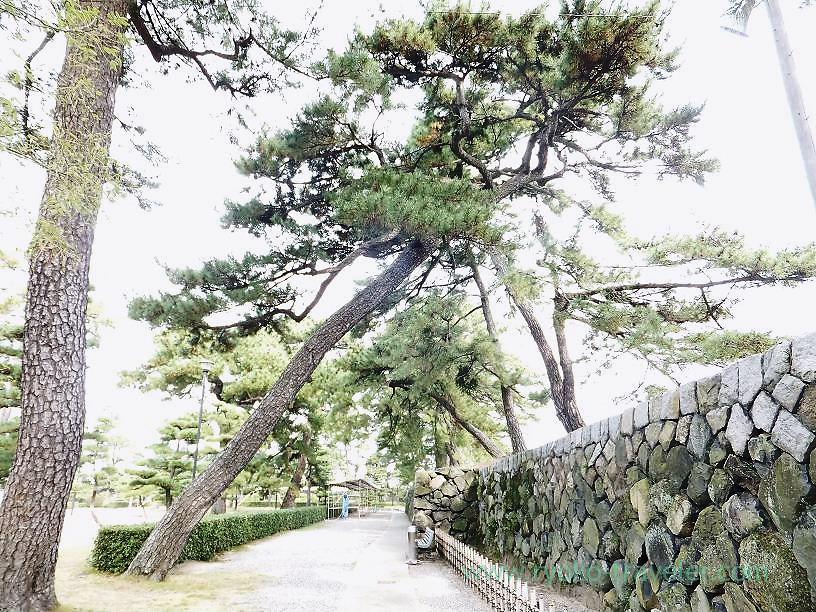 sayabashi (Saya bridge) between Honmaru and Ninomaru was under construction. 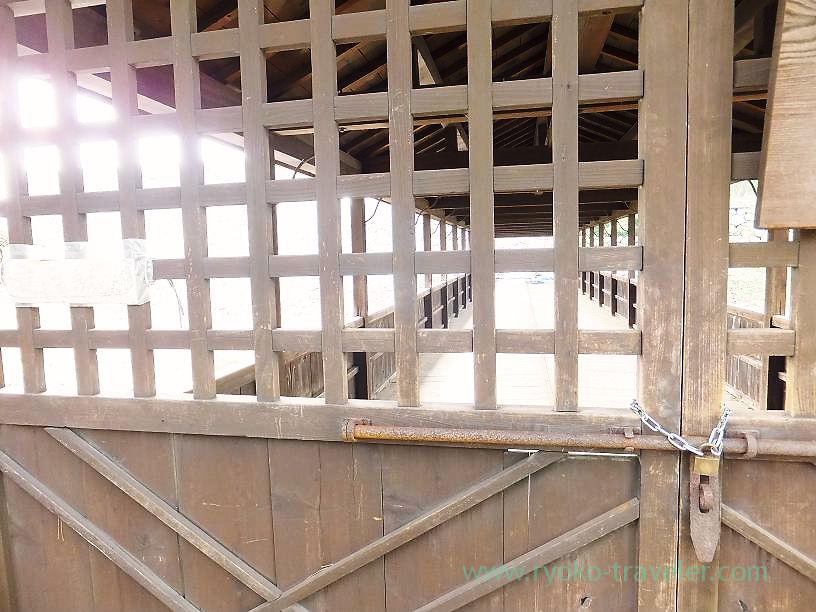 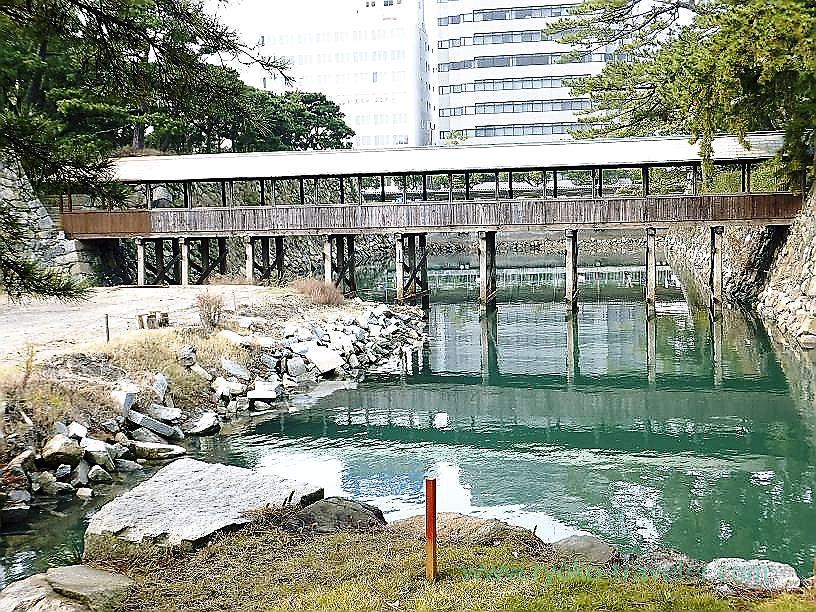 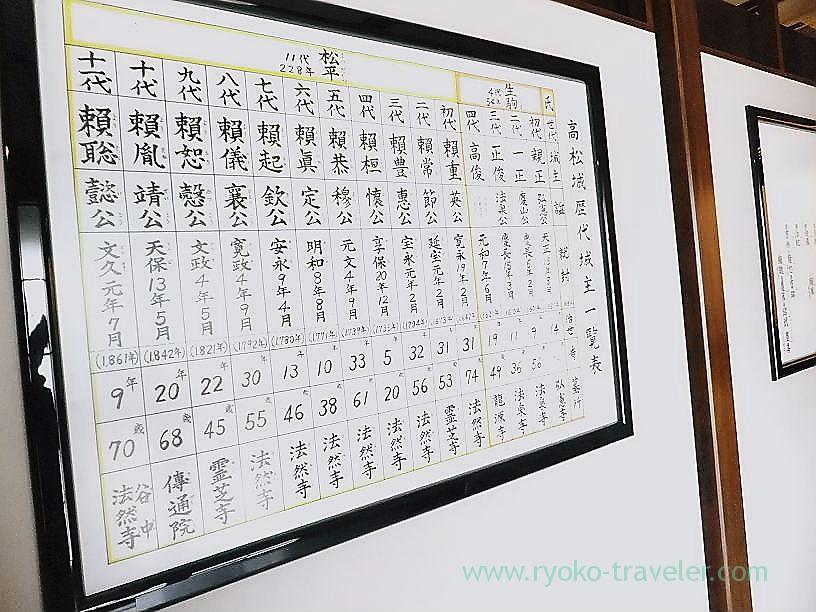 The garden is beautiful. As same as Ritsurin Garden, this garden have lots of pine trees, too. Naien Oniwa. 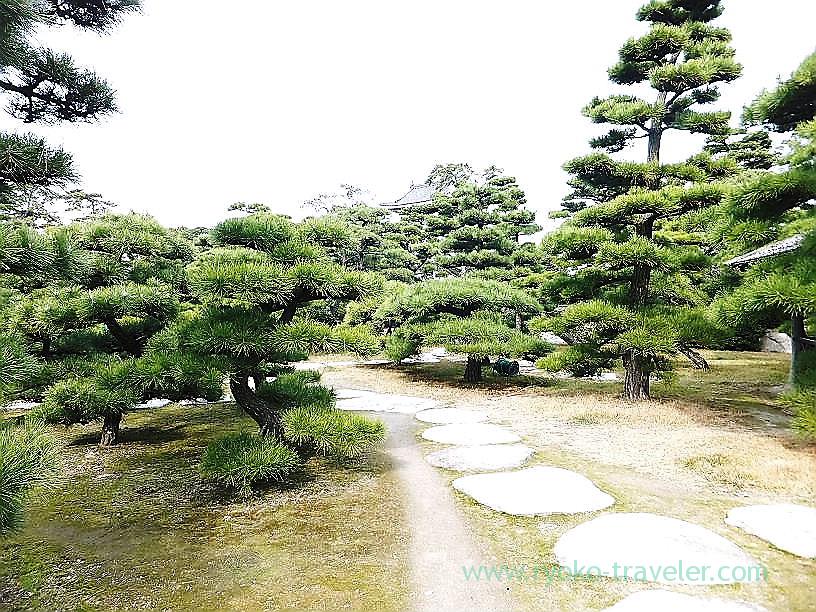 There’s weeping cherry tree. It must be beautiful in Spring. Gathered pine cones are materials for artificial tree and used for drying mushrooms. 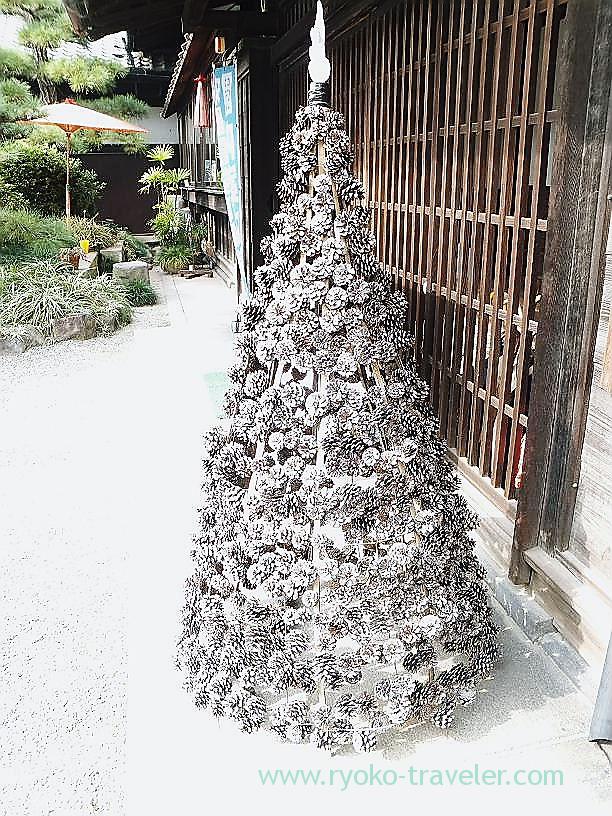 I tried go to the top of the castle. But because of the steep staircase, I couldn’t go up to the third floor.
I felt I was climbing.
The trouble occured when I went down to the ground floor. I got a crick in the leg…
I took more time than expected at this park and had not much time to go another place. After all I decided to have lunch somewhere and go to Tokushima airport.
I should have taken flight from Takamatsu airport.

Umm. I had no luck with Iya onsen from the beginning 🙁

After I got out of my hotel and went toward Kawaramachi station, I met Minami-Shinmachi arcade. That was rather large ar...

After we had a break at the cafe in front of Kawaramachi station, we went to Takamatsu station and took a walk and then ...

Our trip started at Udon baka ichidai and ended there, too This will be the last post about my udon trip to Takamatsu :...

We flied to Takamatsu with cheap tickets ! I went to Takamatsu of Kagawa prefecture to eat Sanuki udon last weekend. B...