Well-known shop, but hard to visit for tourists

Recently Tsukiji on Saturdays is packed with so much people and I have no idea where to go. Almost all shops have long line !
The best choice to solve the problem is following specialist of enjoying Tsukiji ! So, we asked him to take us to shop that he recommends 🙂

He chose this shop that is named Takeno. 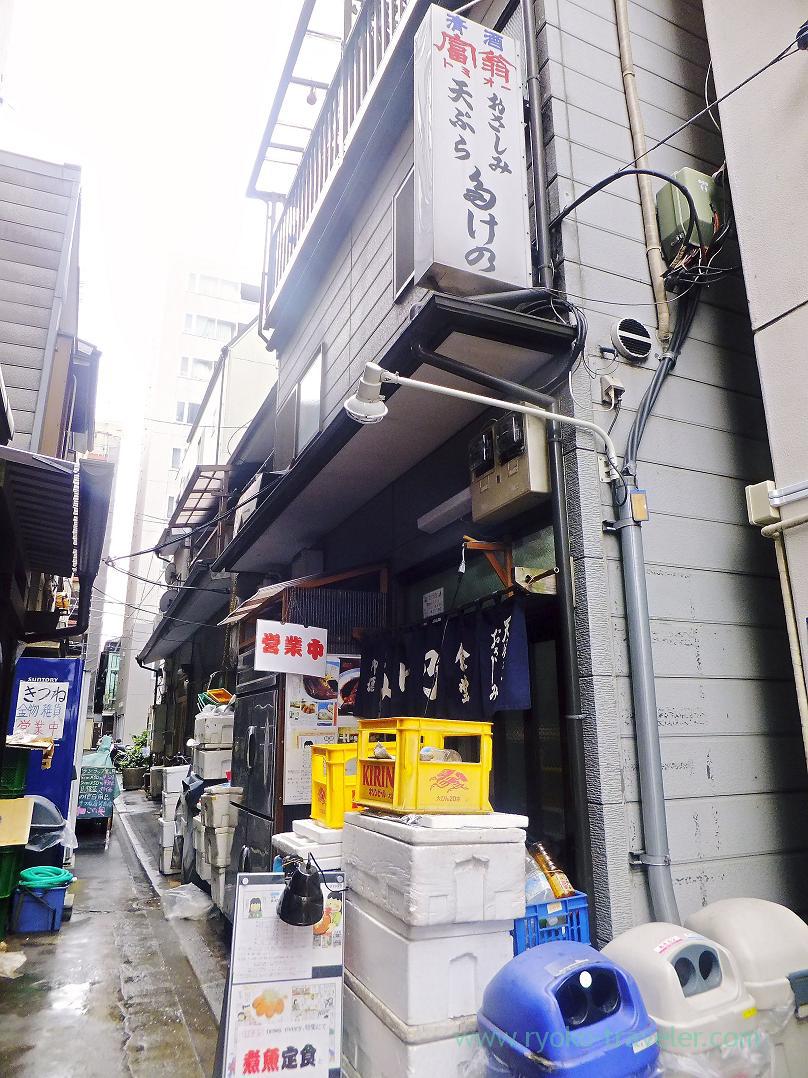 Takeno is one of the most difficult shop for strangers in Tsukiji ! Takeno stands along such a narrow alley !

I went to there once at lunchtime. It was lunchtime that time, too. But two people drunk alcoholic drinks and ordered many foods 😛 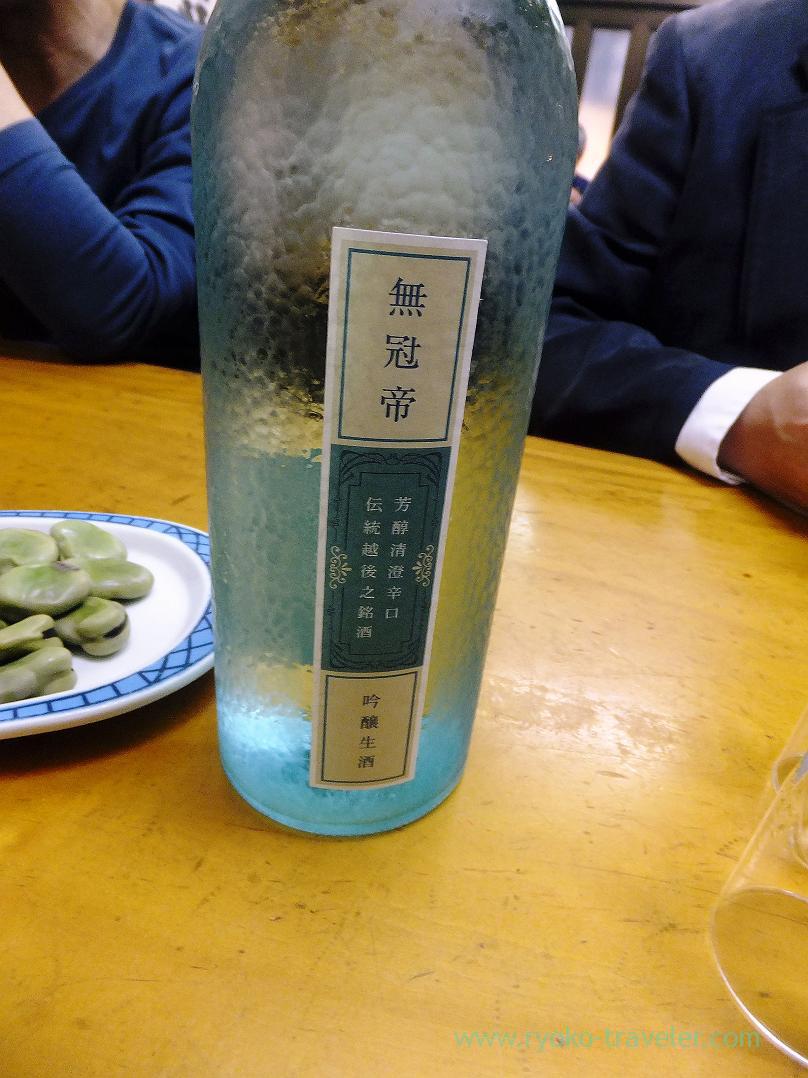 So someone who can drink alcoholic drinks drunk.
I had a dental treatment after the feast, so I didn’t drink it. The bottle was beautiful ….

Two person drunk it up 🙂 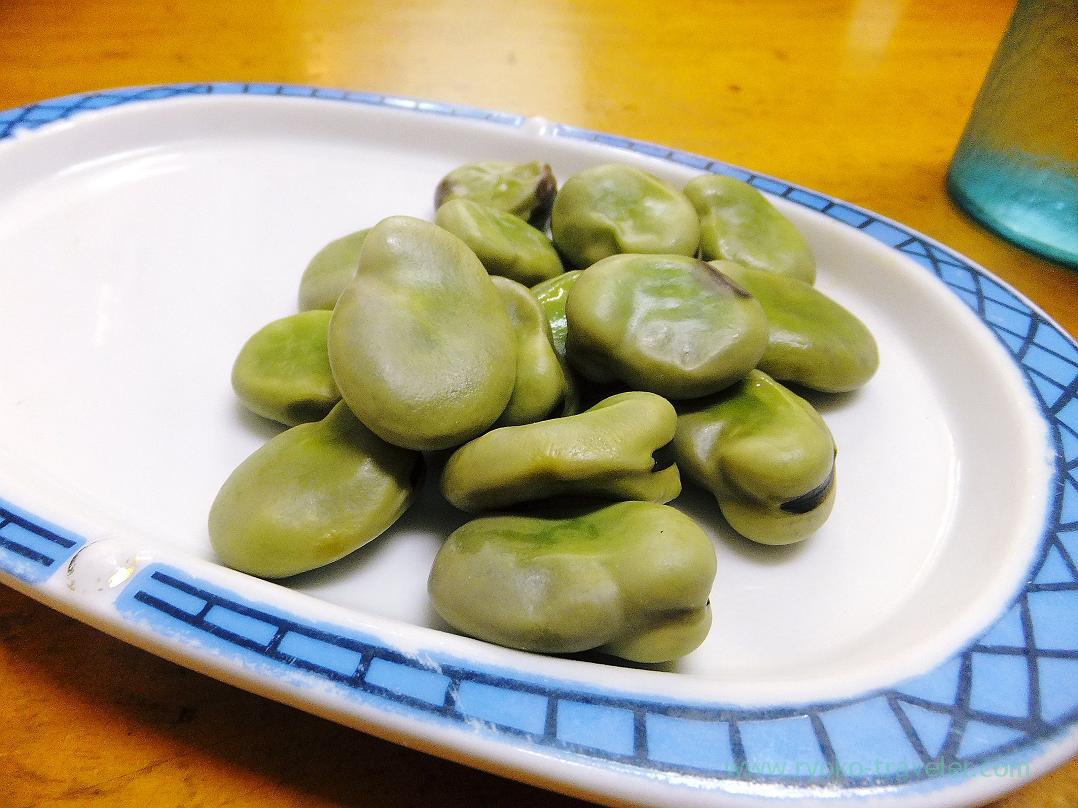 The reason why Takeno is difficult for tourists is it.
Menu have too much food. And prices of foods containing seafood is current price. (But it is not expensive like sushi shop around Ginza :P) 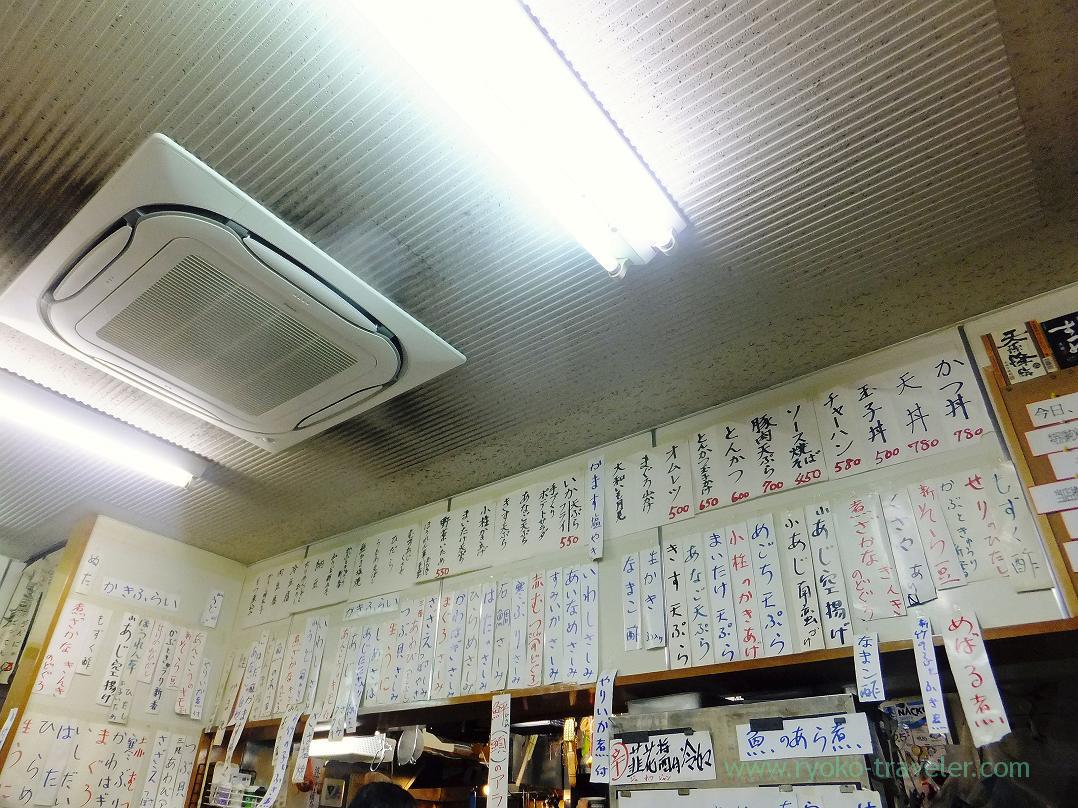 (And staffs are unfriendly. I heard they (are family) have quarrel so frequently.
But their foods are delicious ! 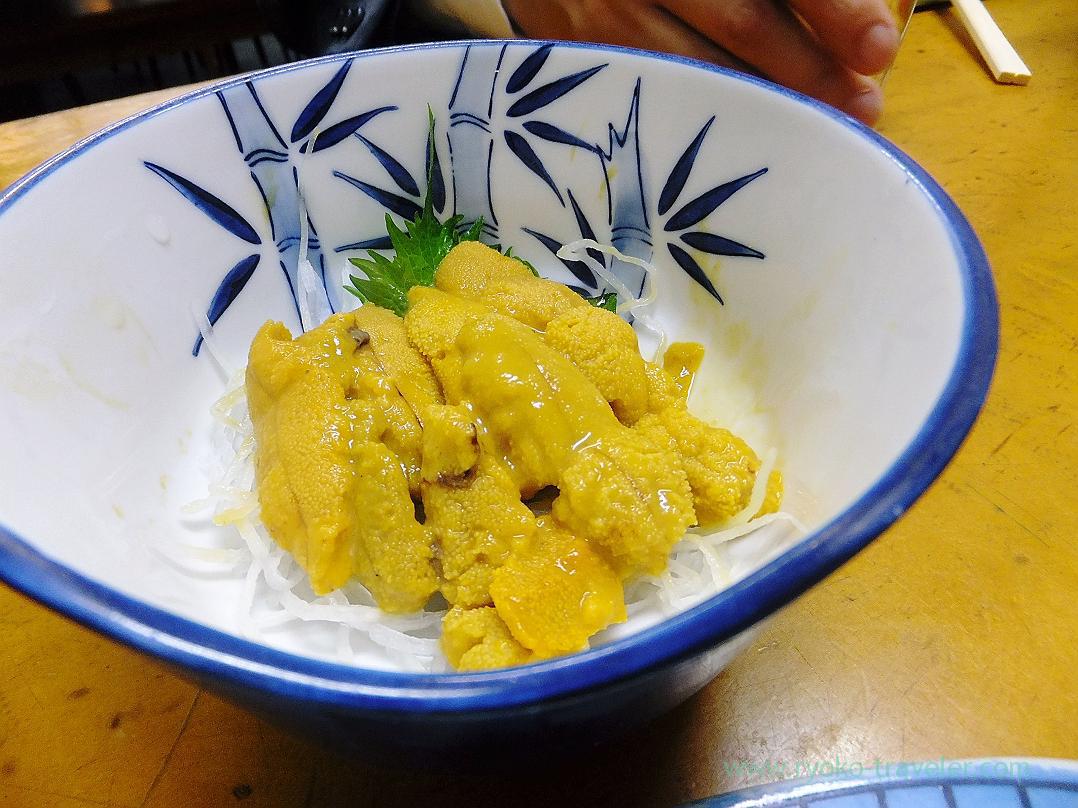 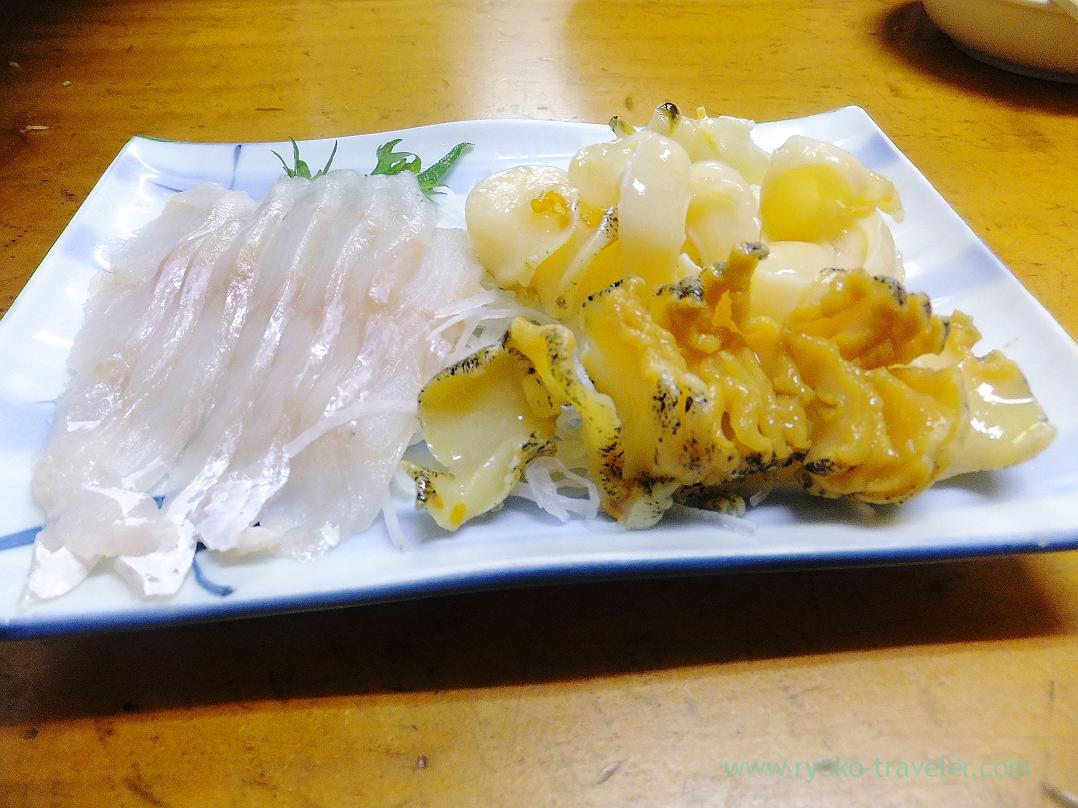 The welk is, as you see, fresh and its texture was good ! 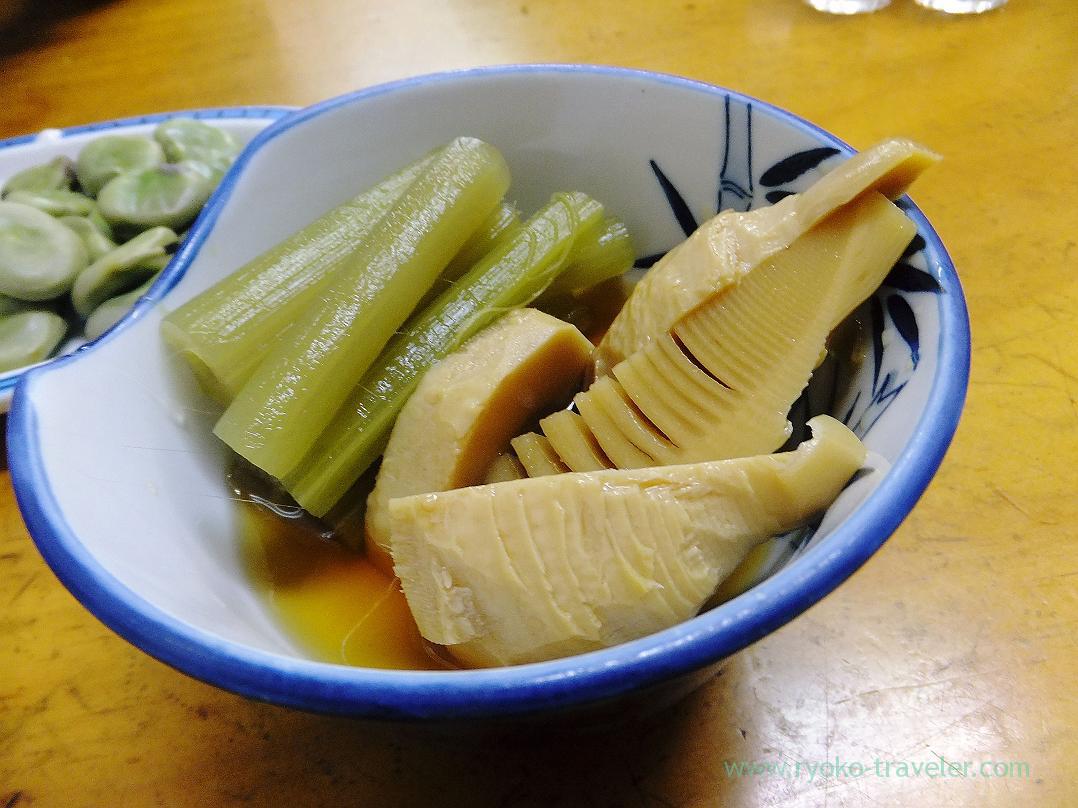 Now is middle of Spring ! 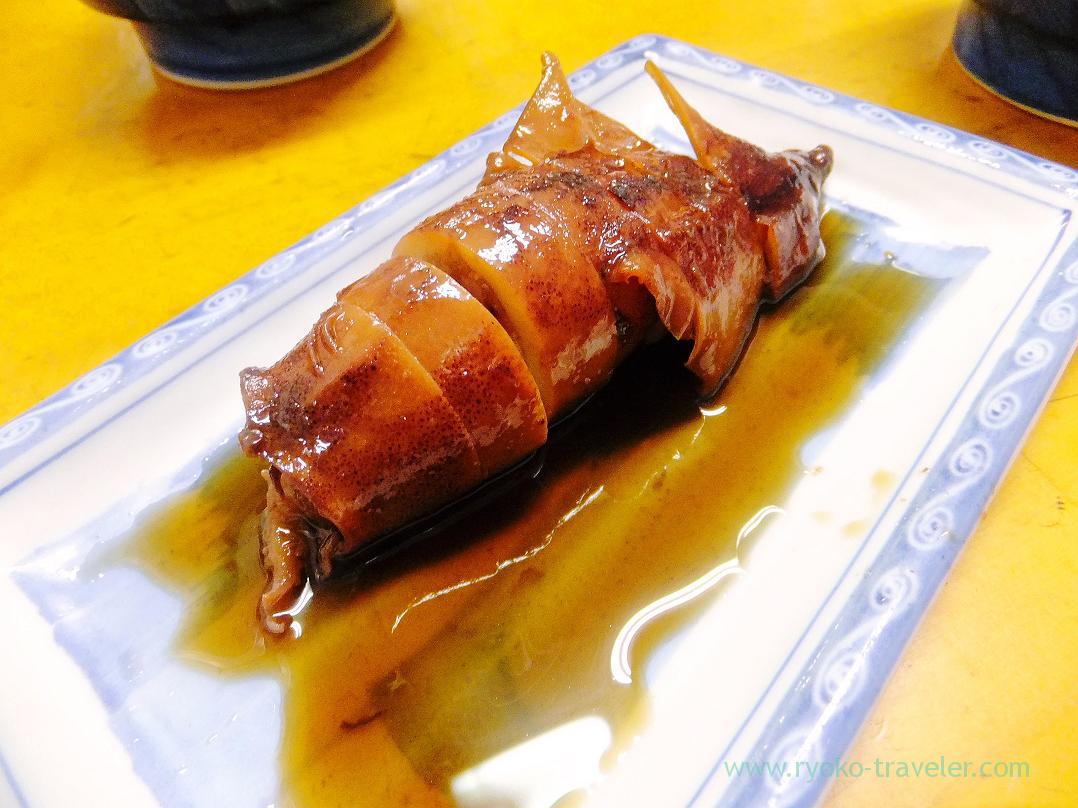 It contained its foot inside and simmered.
Its section is like this. 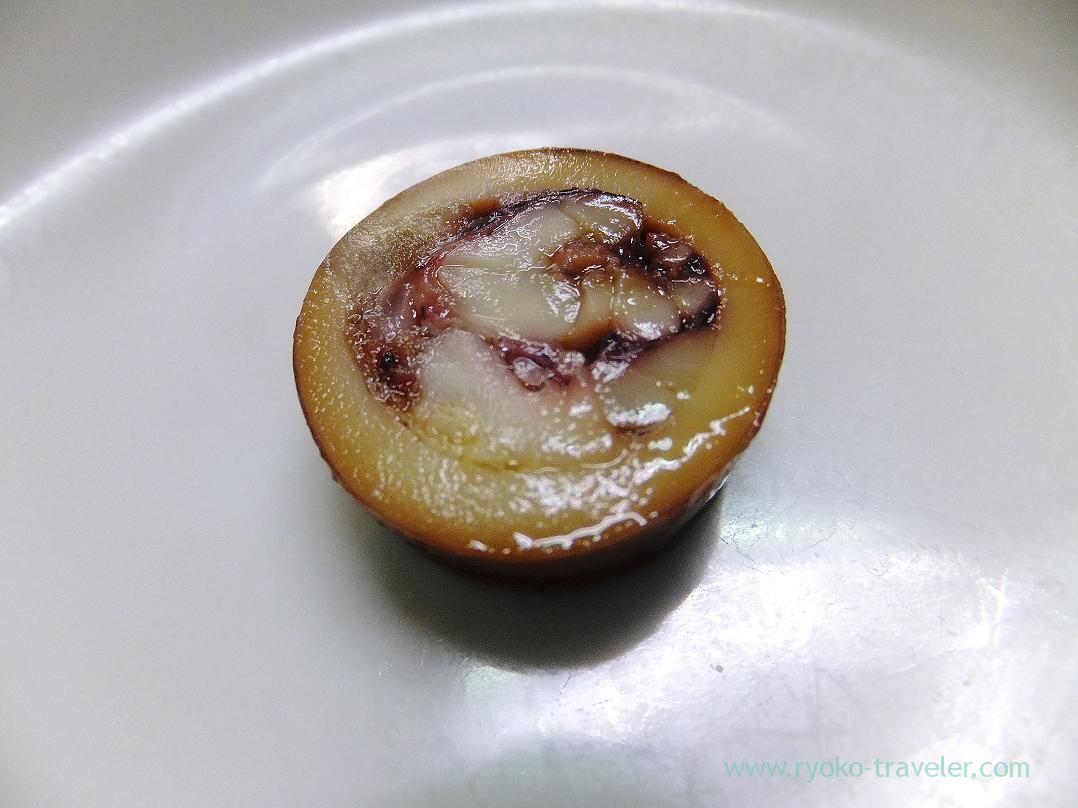 Takeno’s deep fried oysters is too popular among people who love Tsukiji because of its appearance.
Like straw bag ! 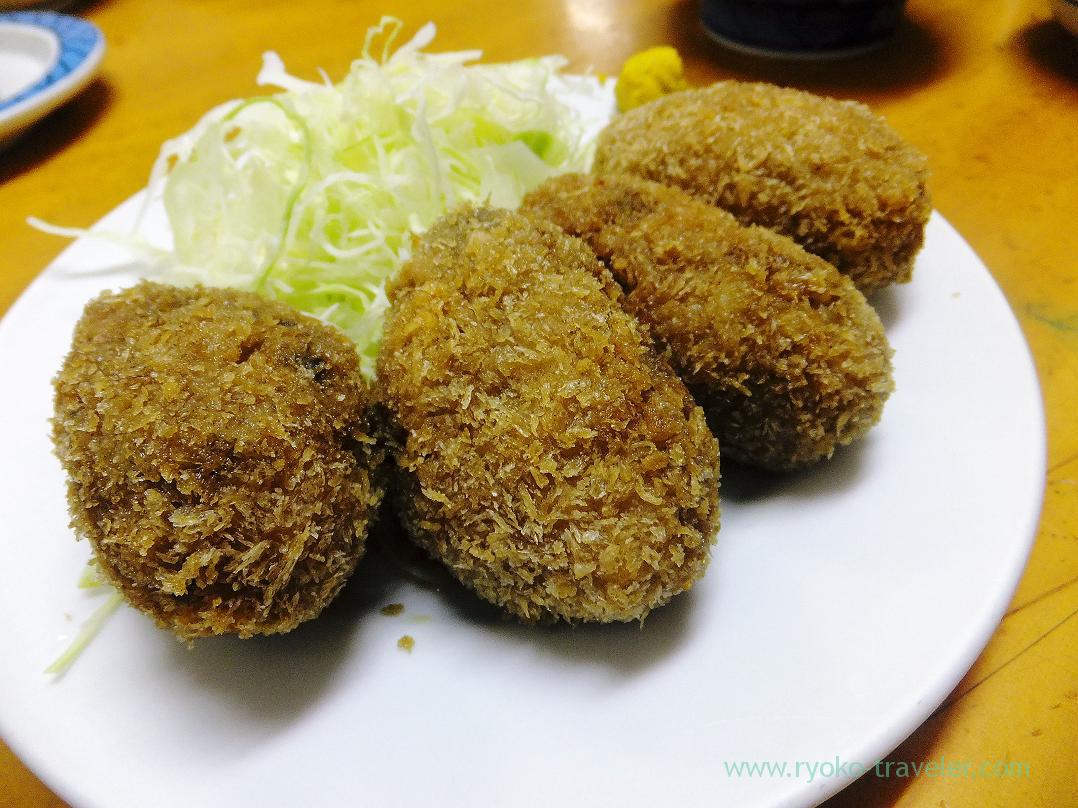 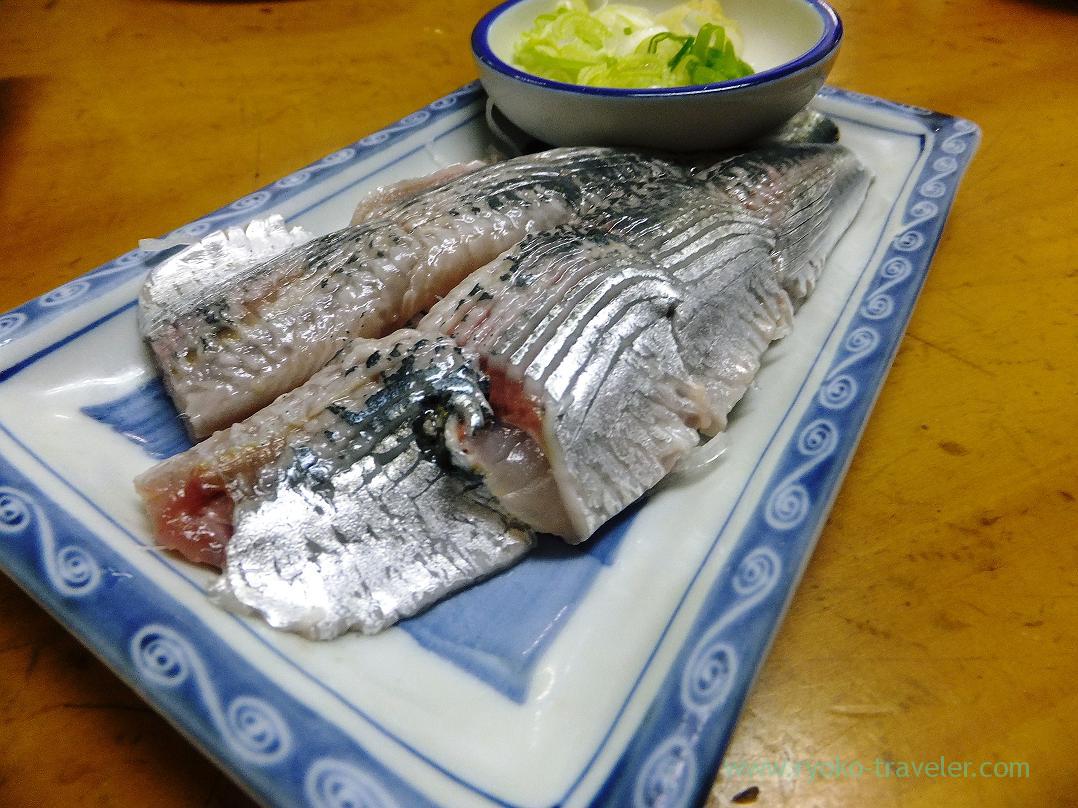 So fatty sardines contrary to our expectations ! Though it was not sardines’ best season !

And we ordered some tempura.
Sillago and big-eyed flathead tempura (キスとめごちの天ぷら) 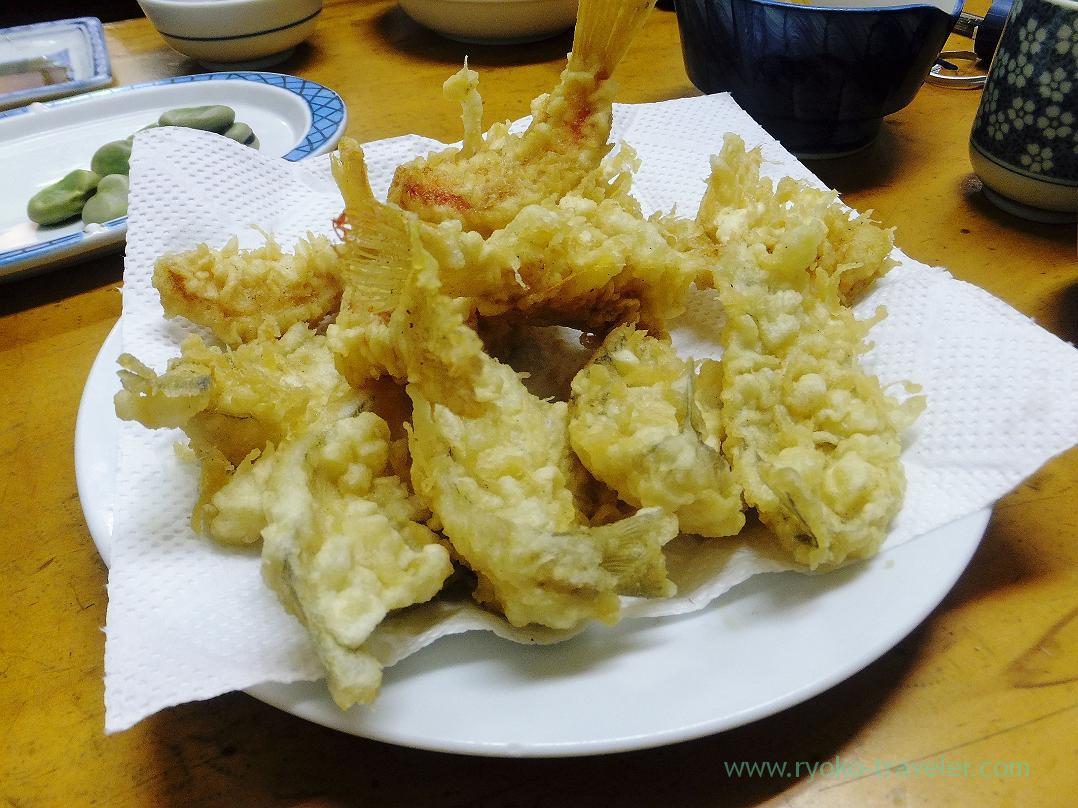 Those tempura was so crisp 🙂 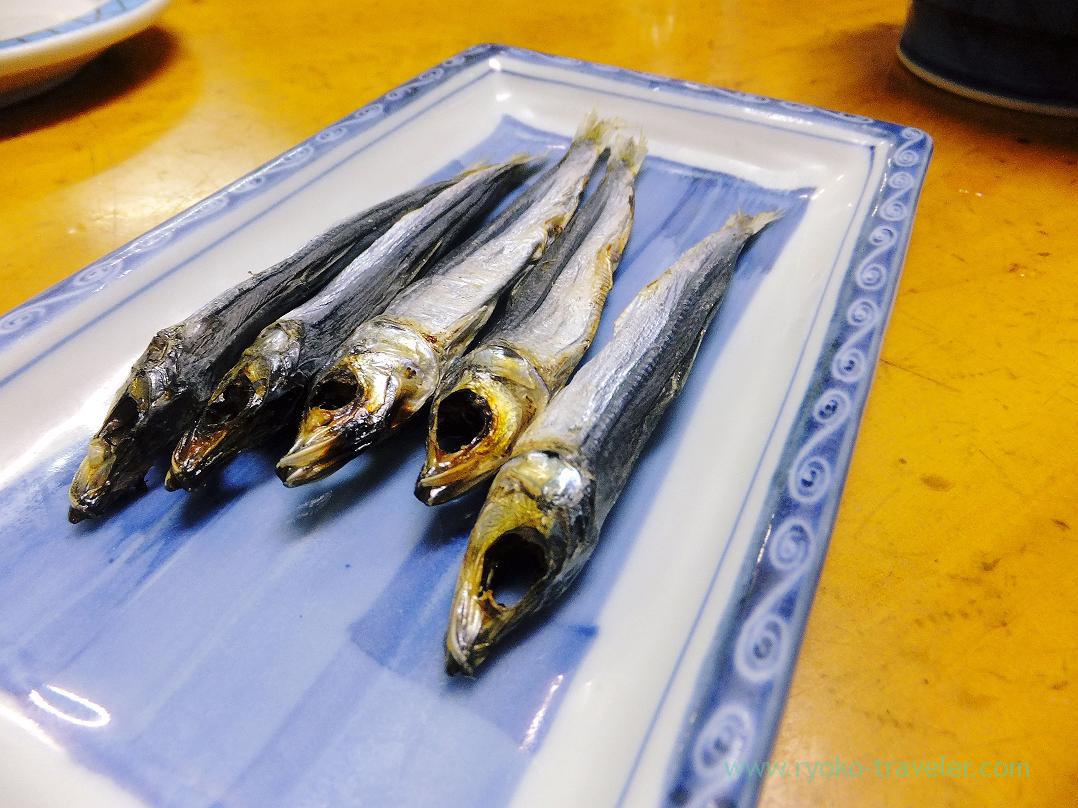 I like this bitterness. It is often my breakfast 😛

We ordered it on the way. But I don’t remember. Maybe dried cod ? 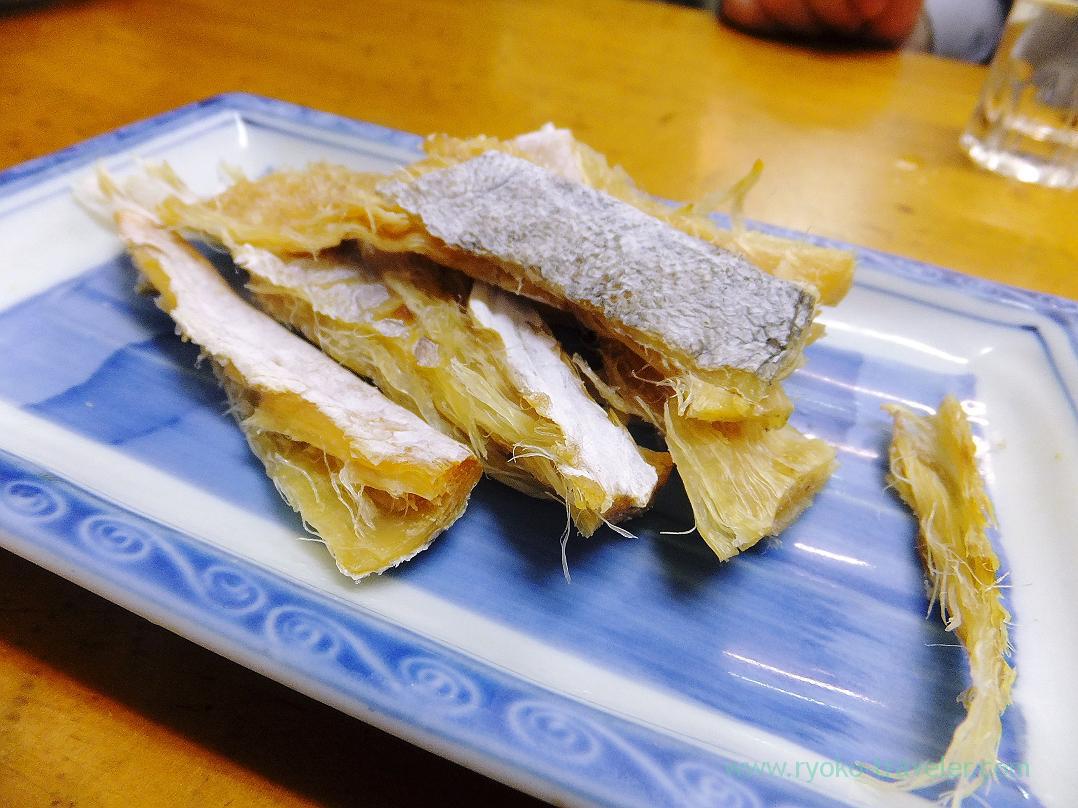 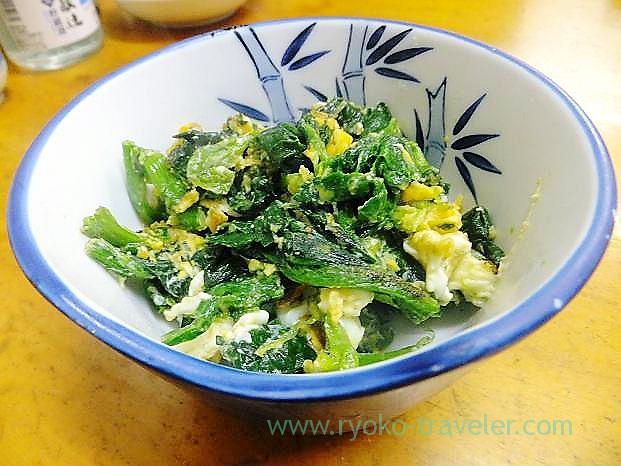 It was good. This is made from something in the ordinary supermarket. So, I want to try cooking it.

Those were really tasty. I searched my blog and I found I post about Takeno last time three years ago. And same day ! Oh my !
Truthfully speaking, I want to go there more often than now…
http://www.ryoko-traveler.com/takeno1/ 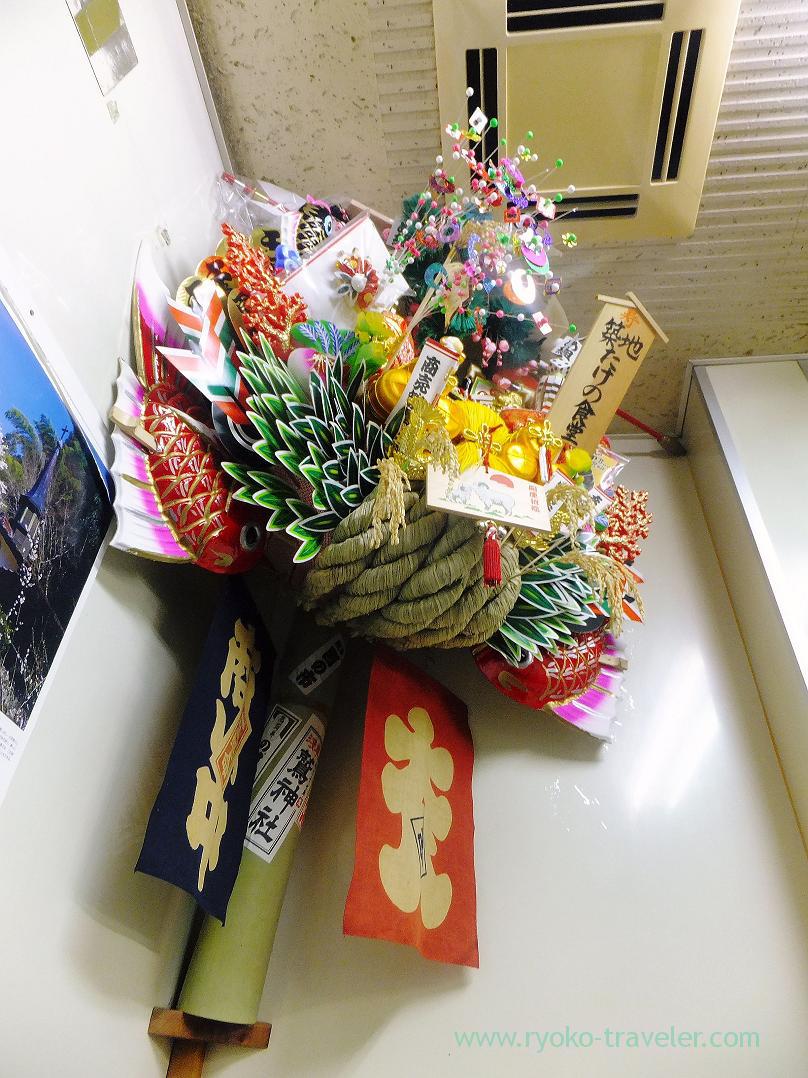 This season has come this year, too ! Now winter season has set in. The best season for Hotpot is here! Though now I e...

Sushi Yu is a Michellin-star awarded sushi restaurant and I had wanted to visit there. Only one year have passed since ...
Tsukiji : Crab party at Fujimura (ふじむら)
Italy 2015 (10/14) : Florence tour start !