South Indian Dining VENUS that is open recently in Kinshicho area.
I enjoyed the restaurant a lot at dinner time the other day, so, I tried to have lunch at there.
Ah ! the flag is getting loose ! 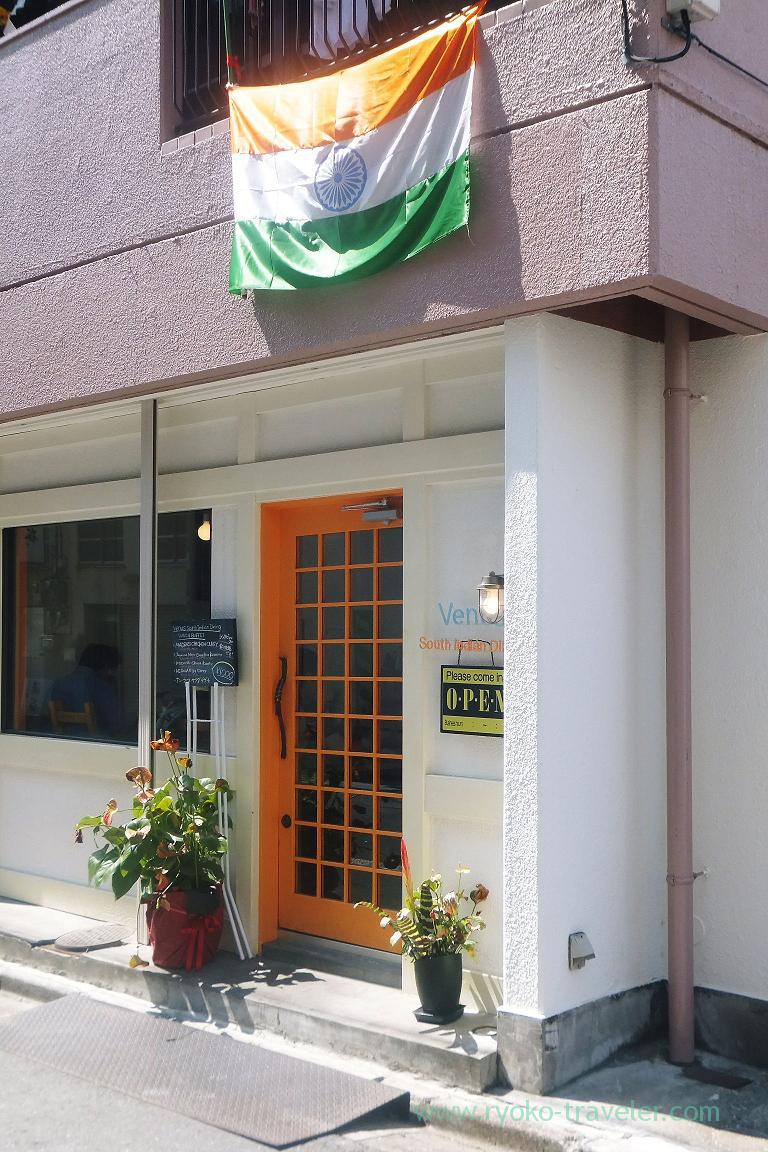 I had heard that they serve meals set at at lunchtime. But they seemed to change their system.
They serve buffet-style lunch (1000 yen)
Four types of curry, naan, rice, salad and dessert is served on the long table.

I had no idea how to dish them up…. so I hate buffet ! My dish show me that I had no taste !

Anyway, I picked egg curry, chicken curry, beans curry, rice, naan and salad on my plate. Those curries were quite spicy !
I like the egg curry best. Half-boiled eggs were in the spicy curry. Curries in warmers were not very hot, so, eggs remained half-boiled 🙂 I like rare yolk !

Well, I have another reason why I don’t like buffet. Foods get cold in warmers. Rice and naan got cold..
My friend who already had second helping while I was eating foods on the first dish said to me, “Now, naan and curries were hot !”. But I couldn’t because this first dish made me nearly full. 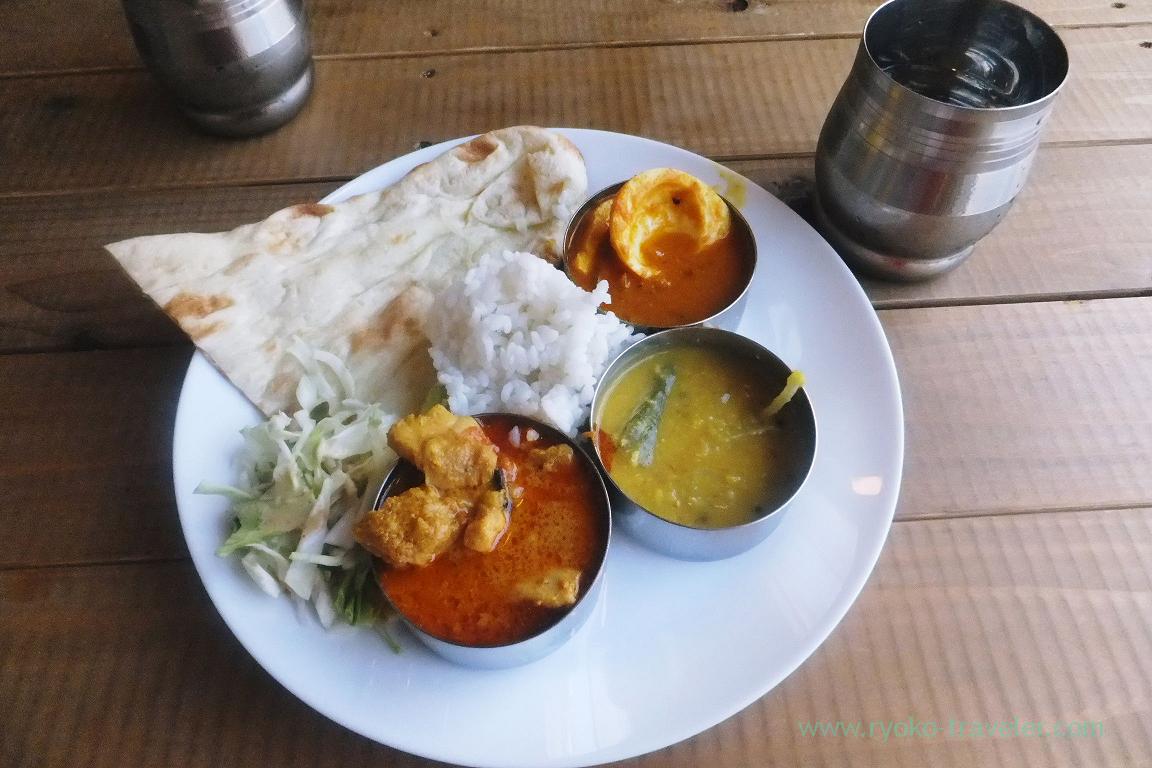 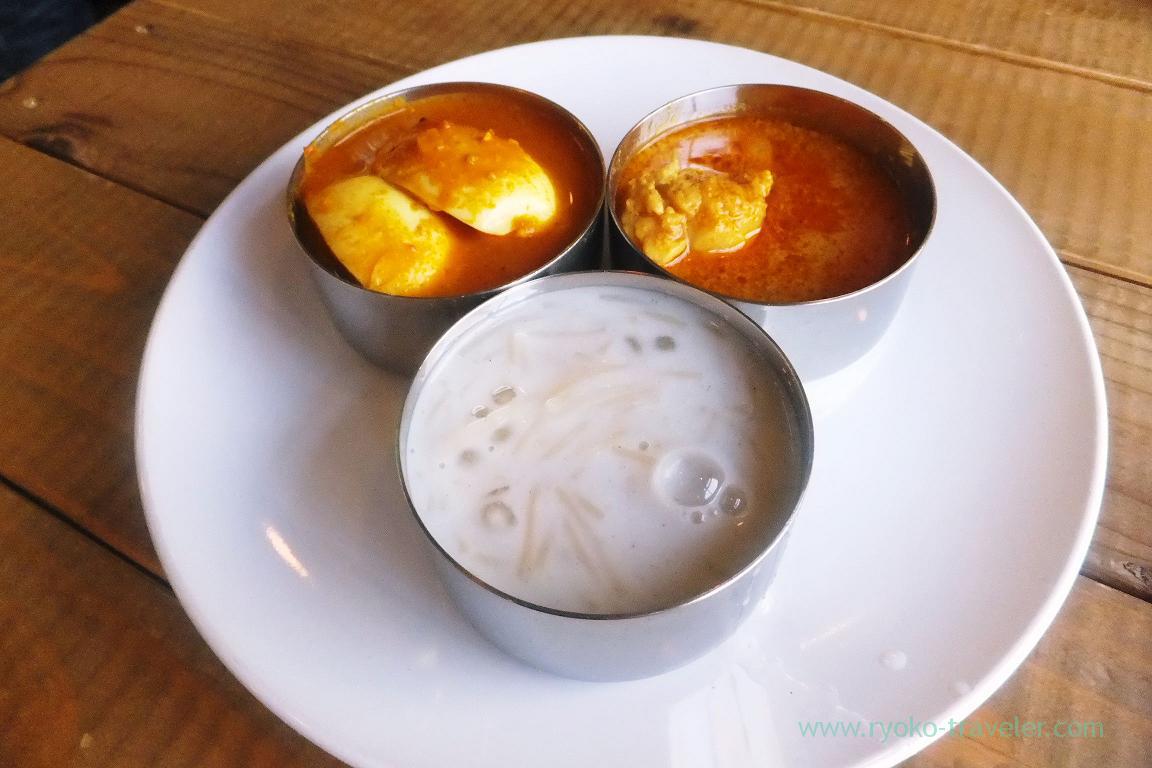 Those were tasty, but I want them serve lunch set again….

Kinshicho : New Indian restaurant, Venus (ヴェヌス)
Already it became one of popular Indian foods restaurant in Tokyo After Akimbo that was in Kinshicho area moved to Saga...

Irie (いり江) was born in 1970 in Monzen-Nakacho. They are long-established kanmidokoro (Japanese confectionery cafe). I l...

My best shop in Ginza now is SIBIRE Noodles Rousokuya. Rousokuya serve delicious mapo tofu noodles. They always have a ...

One of the few Sri Lankan restaurant in Tokyo. I had wanted a small bag for my lunchbox. I had searched for a long ti...

Togenuki Jizo is the most well-known jizo in Tokyo... but. When I had something to do with at Sugamo, I dropped in at K...
Asakusa : Chinese foods at Ryuen
(Closed) Tsukiji : Spicy ramen at Tsukiji Taisyoken (築地大勝軒)