Unexpectedly rainfall prevented me from hell

I intended to finish posts about my trip to Oita this time, but while arranging the photos, I found there are too many photos that I want to show you. So, I’ll post one more article about this trip 😛
Though I wanted to post one altogether about “Beppu Onsen town”

Before that, you might forget about my Oita trip because much time have passed since I posted about the trip last time.
So, this is the post last time 🙂 Today I post about the third day. Last day of my Oita stay.
http://www.ryoko-traveler.com/oita2015spring4/

There are some big lockers and someone who use this accommodation can use those lockers. So, I put my baggage into the locker and got out of the accommodation.

I wanted to do Jigoku-Meguri. So, I went to Kannawa Onsen bus stop by bus. And then I started Jigoku Meguri (Hell-tour).
I remembered that I didn’t have breakfast, so, I bought it at Lawson that I happened to find on my way to Jigoku area.
Karaagekun. Usa-Shoyu flavor. While in Oita, I felt like eating karaage somewhere ! Oita is said to be a barthplace of karaage ! But why did I eat Karaagekun at Oita … 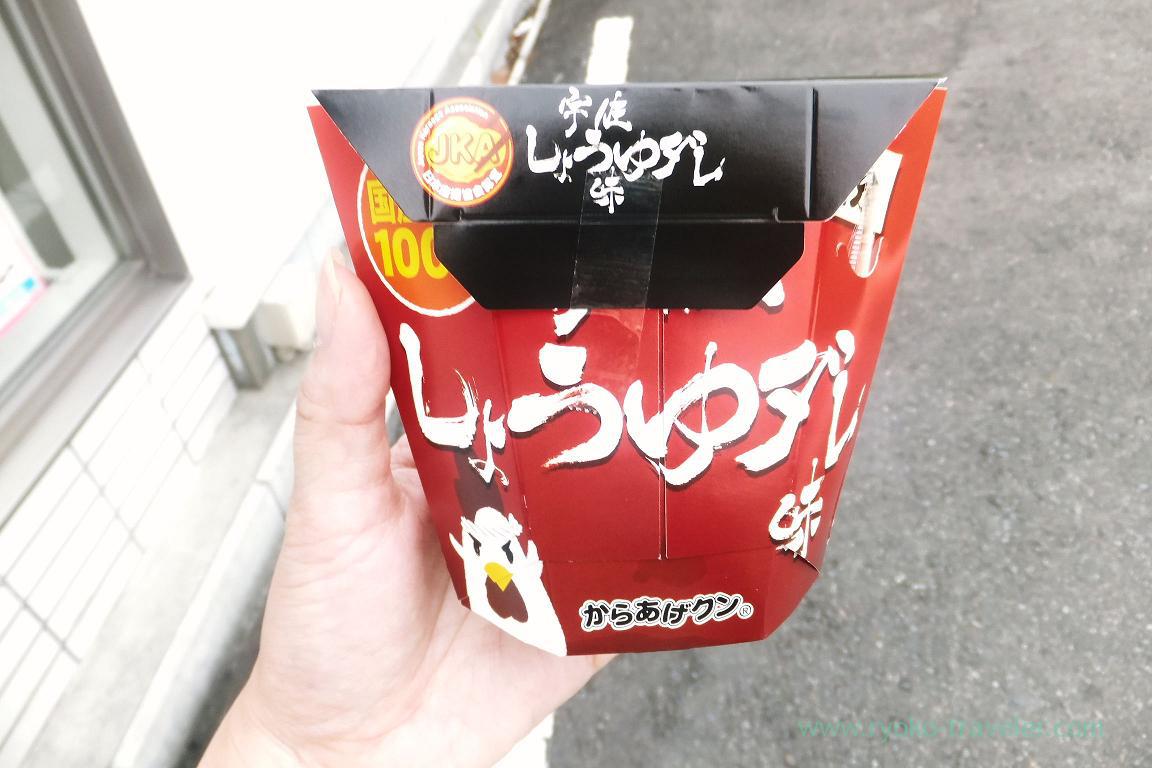 I scheduled to do Jigoku meguri, but on the way to Jigoku area, it started raining. I forgot my folding umbrella at Narita Airport, so I didn’t have umbrella. There was no shops. It was very far to go back to the Lawson.
I was at a loss and walked to Jigoku area, then I found the sign of Shibaseki Onsen. I wasn’t interested in the onsen and I didn’t intend to take it at the trip, but I thought this is the good chance to visit and perhaps this would be the last chance to visit there 😛
So, I decided to take the onsen and shelter from the rain. 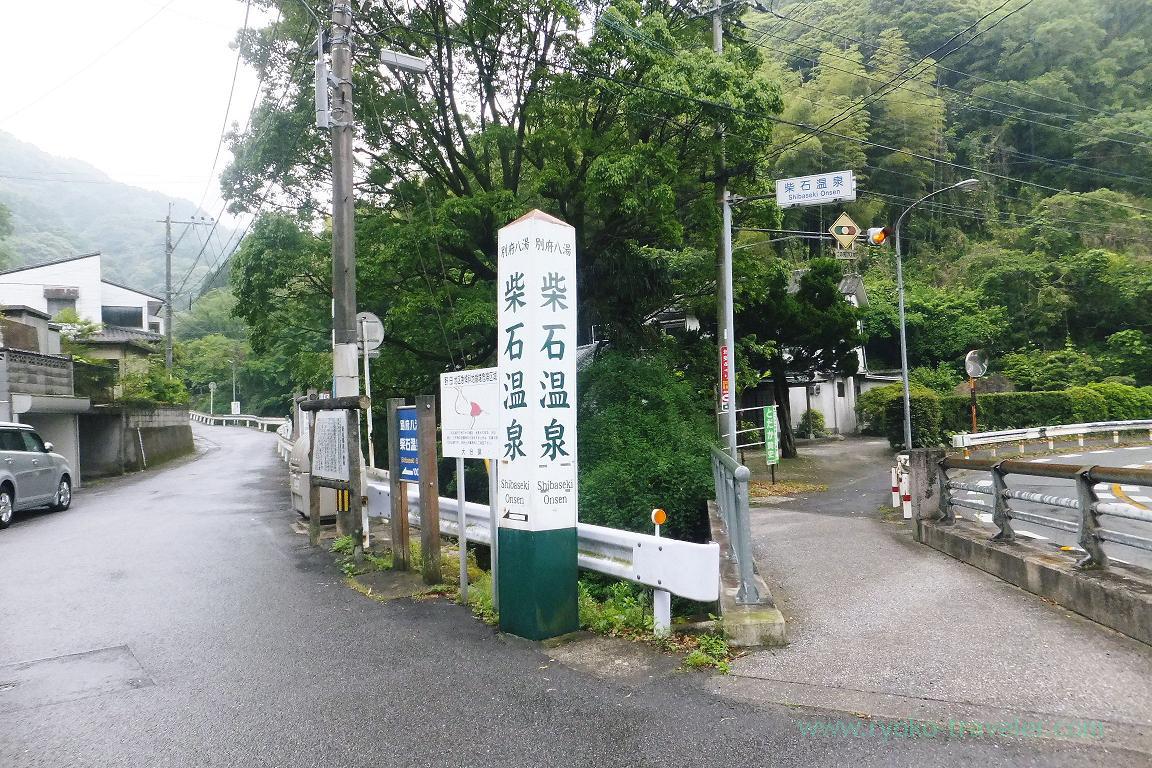 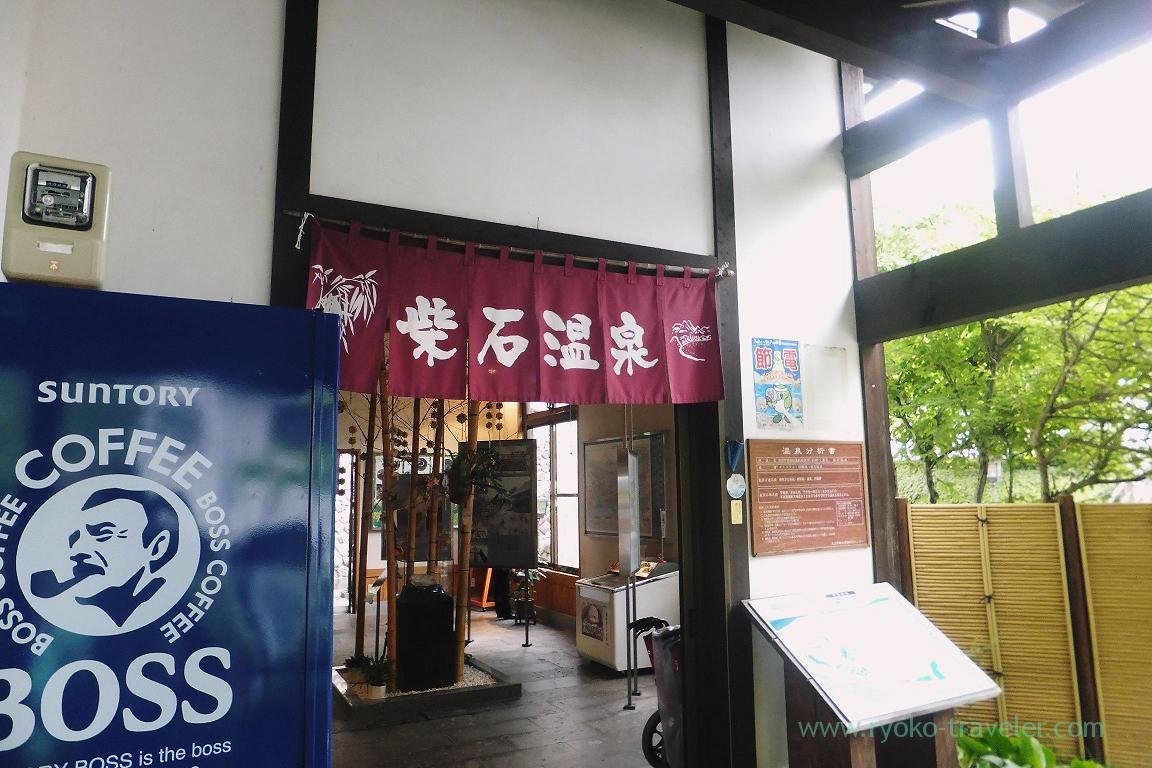 I found this onsen resource was far better than expected. It is sulfur spring and the water is white.
And the Steambath that is specialty of Beppu was there, too. Too hot ! I couldn’t take the bath for a long time. 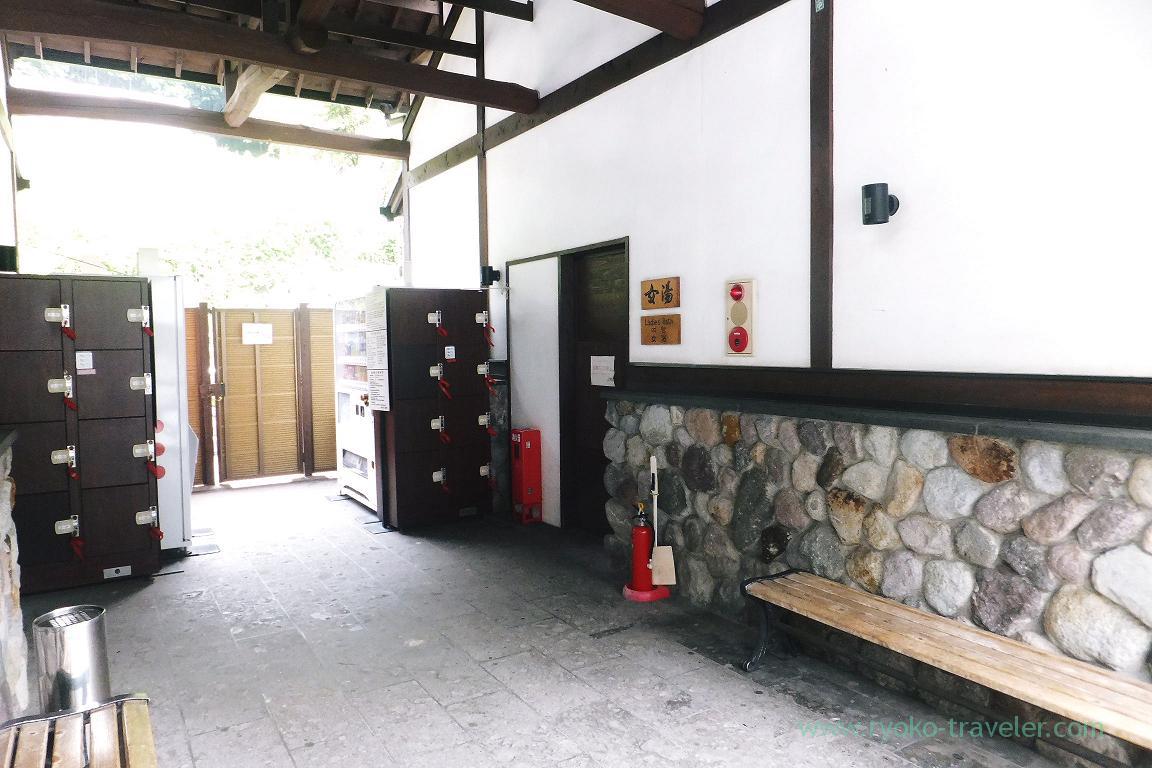 After I got out of Shibaseki Onsen, I found the rainfall got heavier than before taking the bath. Umm…
I gave up and went back to Lawson, and bought an umbrella.
I found it’s already past 10 a.m.
It’s good time to walk to “the shop”. I didn’t see any “jigoku” yet !

So, I started to walk to the shop.
I intended to go to this shop at any cost ! Sushi-go-round ! About 30 minutes from the Lawson. I arrived at the shop 10 minutes before the opening time. Oh, great ! On schedule ! 🙂
(Though I never visited Jigoku yet…) I can’t believe that such expensive fishes at lower price at sushi-go-round shop !
And those were so fresh !

Ryukyu (りゅうきゅう, 130 yen).
Because it was seasoned slightly since they are proud of fishes’ freshness, I couldn’t find the difference between “tataki” and Ryukyu.
Of course, it was fresh and tasty. I was interested in the word “hage” 😛
Hage means bald head in Japanese. I wondered what it this.
I found it meant thread-sail filefish later. It is called “Kawahagi” around here.
I examined later and found “Hage” is used around Kansai region.

And another I ate squid, horse mackerel’s tataki and so on. They show clearly Where every fishes came from on the blackboard. That’s great ! From this blackboard, I chose fishes from Kyusyu area, especially Oita ! Though I ate a lot, it cost me around 2000 yen in all 🙂 Then I started to walk to Jigoku area again !

Amagase onsen - Hidden onsen paradise ! It took about one hour from Amagase to Hita station by express. I had wanted...

From Narita Airport Terminal 3 to Yufuin onsen resort It was a still cold day, I went to Oita to take onsen bath. Now ...

One of the biggest onsen town in Kyusyu ! I got on the train at Hita station and my target was Beppu ! Last onsen on th...
(Moved) Tsukiji Market : White board menu at Odayasu (小田保)
Tsukiji : Spanish mackerel at Hajime Sengyo-ten