The second day’s night, we had Naniwa-style French dinner at Naniwa French Begin 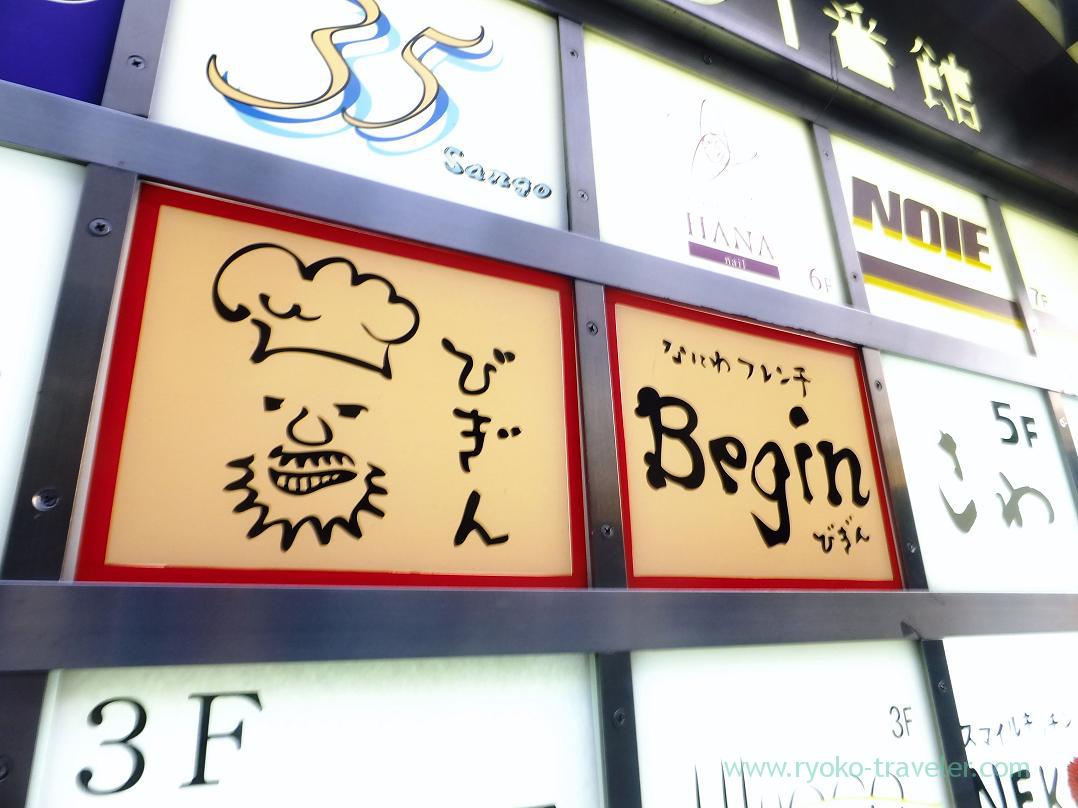 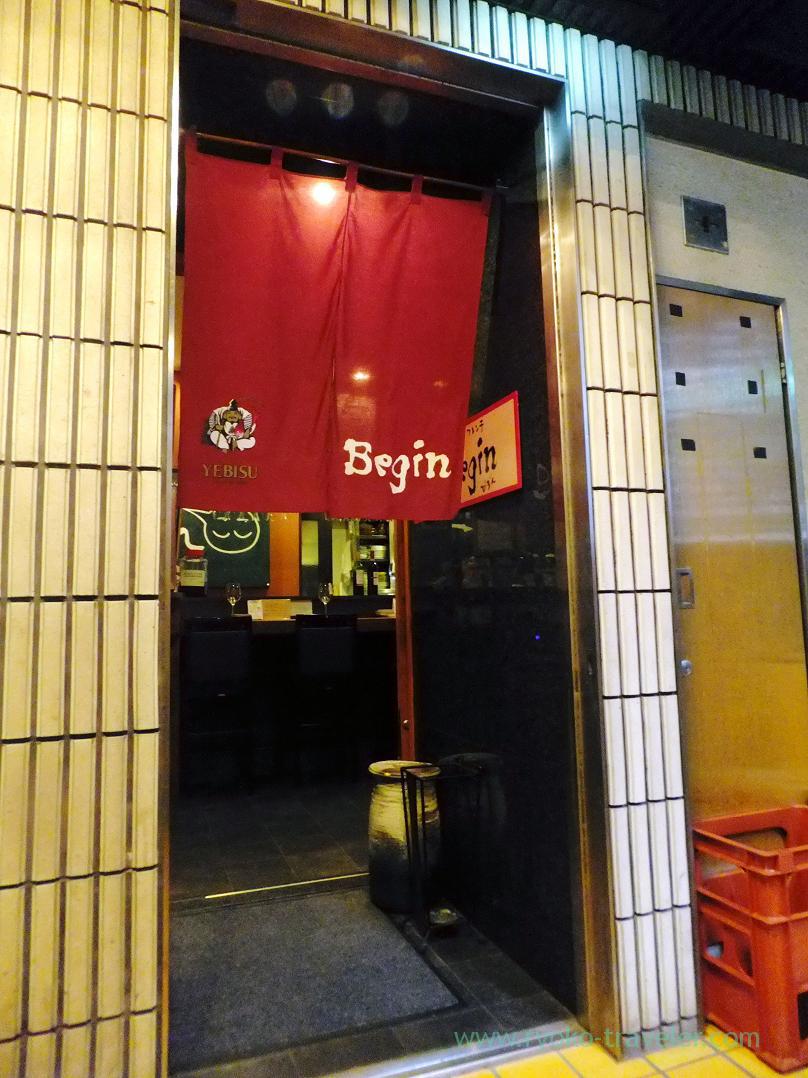 We were there for the first time, so we decided to order set menus at 5000 yen. 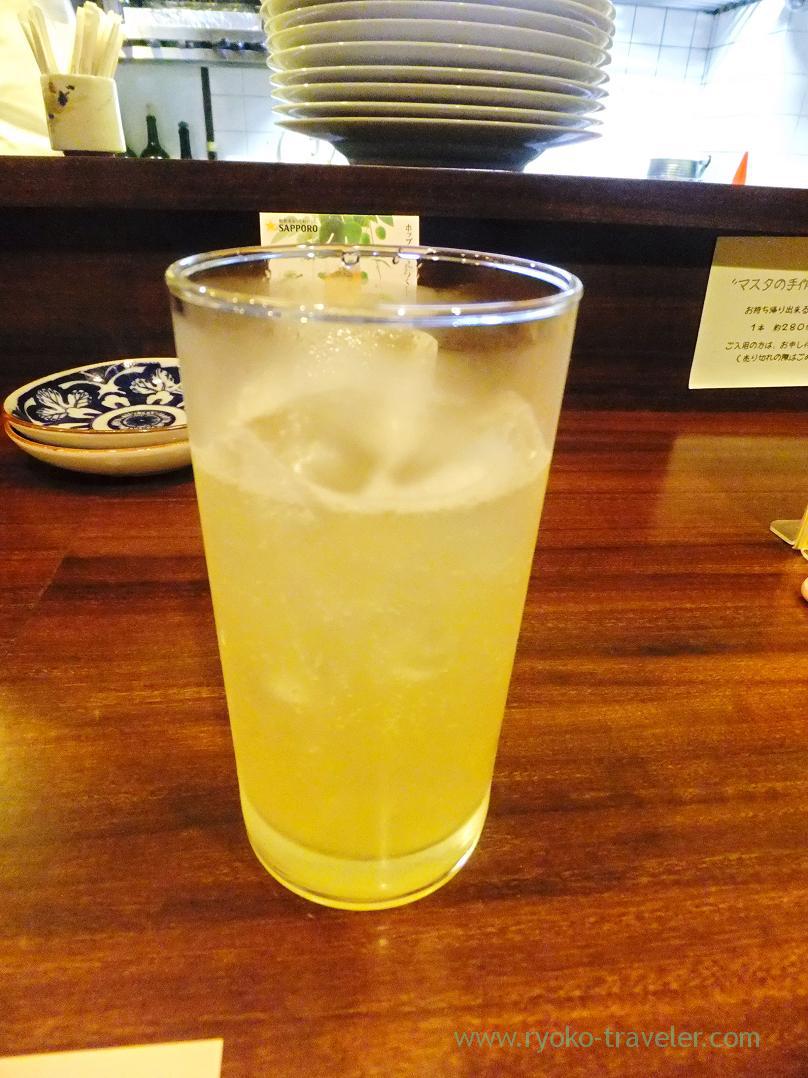 The yuzu was from over 90 years old tree. pesticide-free and fertilizer-free.

First of all, firstborn egg with consomme jelly (初産み卵とコンソメゼリー) came ! 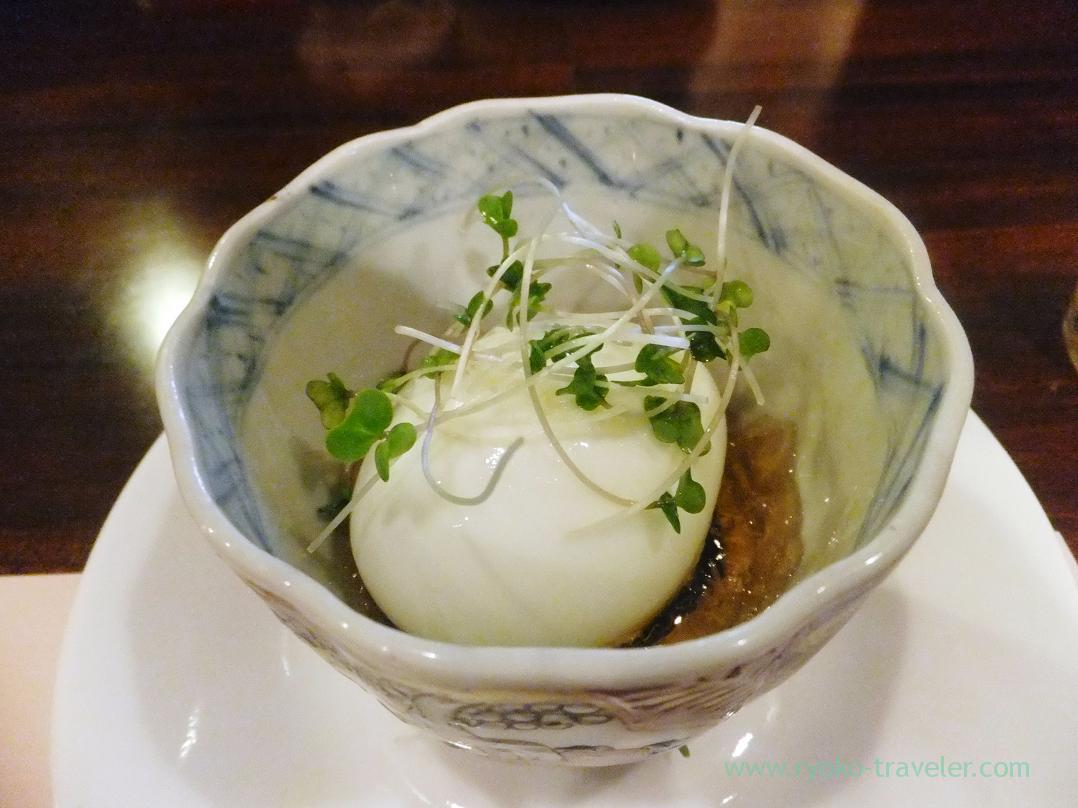 This was the first time to hear the word “firstborn egg”. The chef said that firstborn egg have high nutritional value and rich taste. 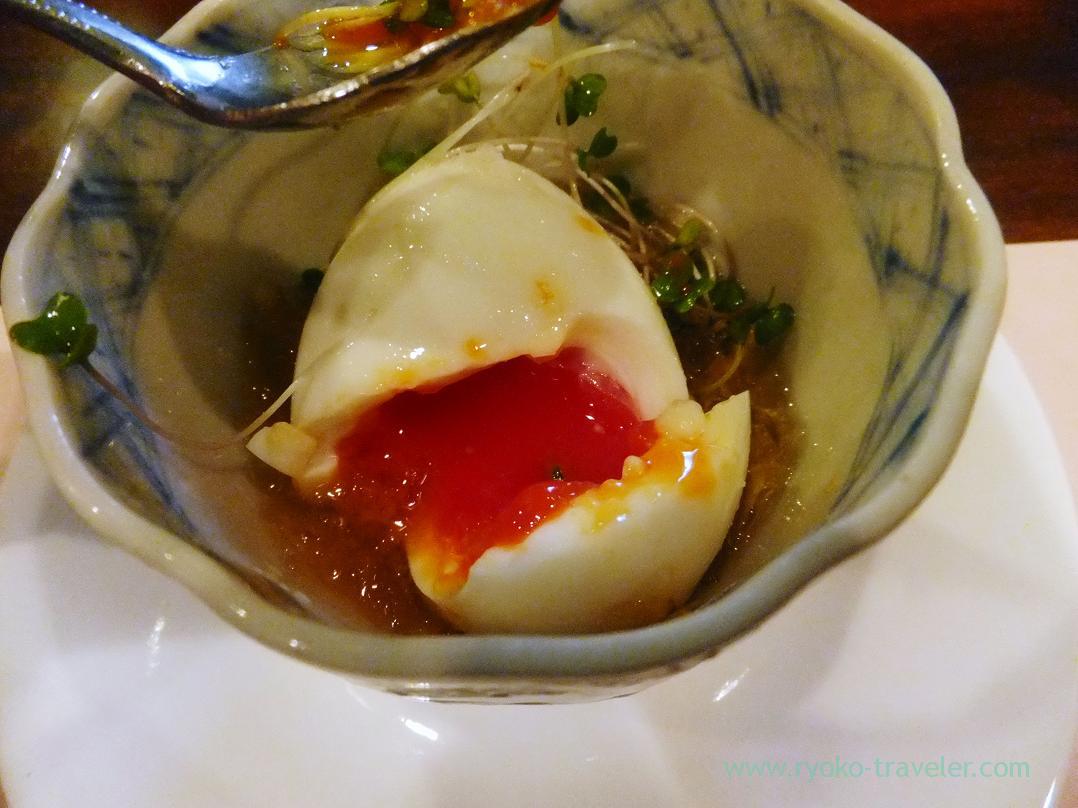 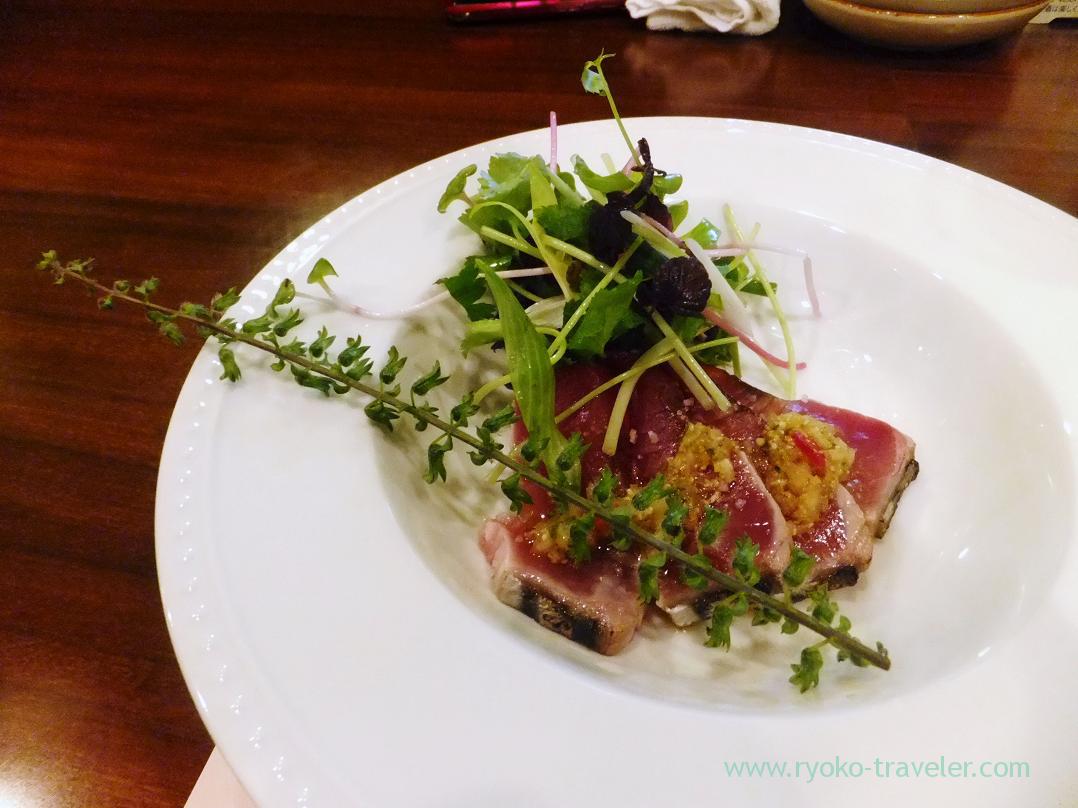 The chef said that this bonito have weight of 8.8 kg ! So large bonito ! Ate it with the ear perilla.
The ear perilla could be separated from its stalk with our chopsticks with ease 🙂
Fresh smells of the bonito was good. 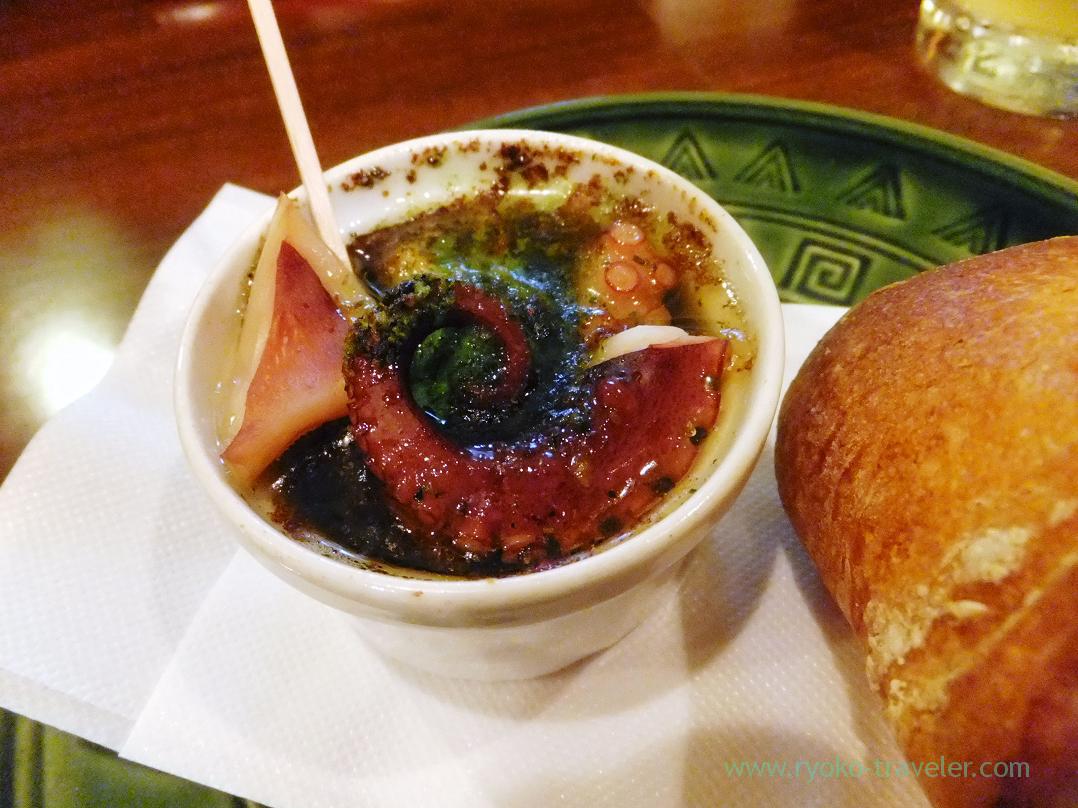 Of course, I soaked my bread into the garlic oil to the limit 😛

Round putty of chicken and foire gras (地鶏とフォアグラの丸いパテ) 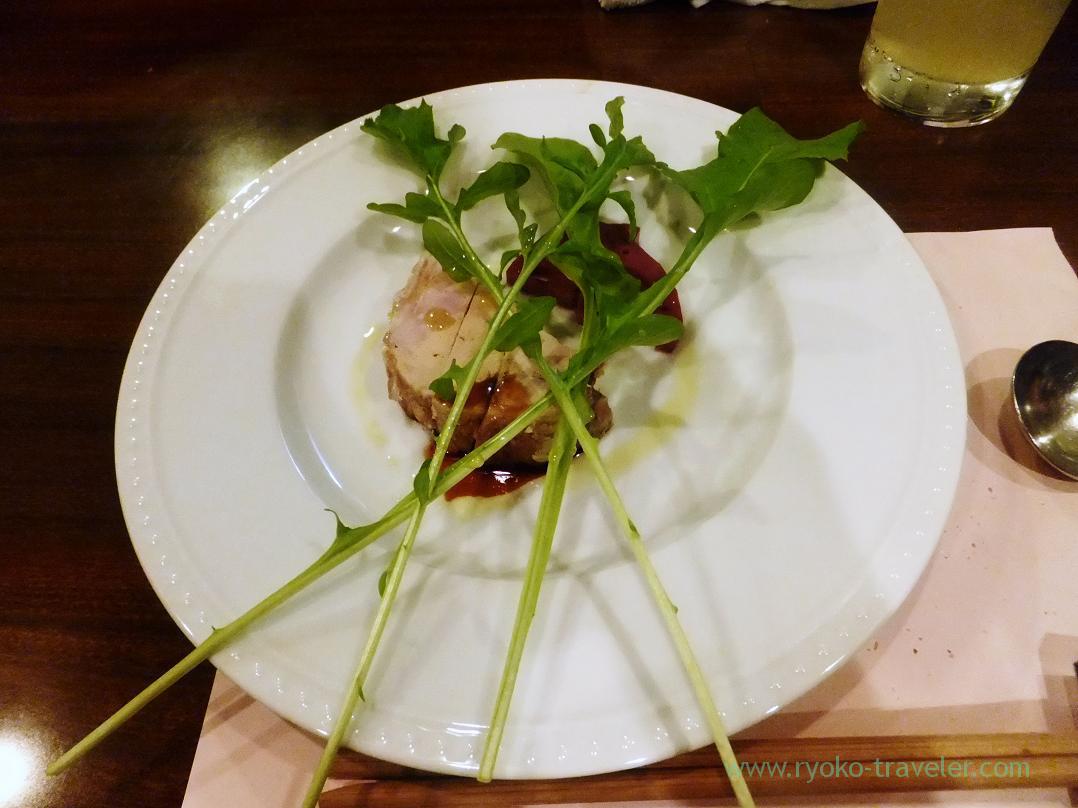 It had smooth feeling and the taste of the foie gras was good.
Still, the water cress disturbed me taking the putty’s picture 😛

The cod was closed on the ship immediately to keep it fresh.
So thick and it had springy texture !!!

And such a large salad camel. They said that was “mix salad”.
The bowl was heaping full of foods !!!
Salad with bamboo shoot, firefly squid, natural bracken etc.. (ミックスサラダ) 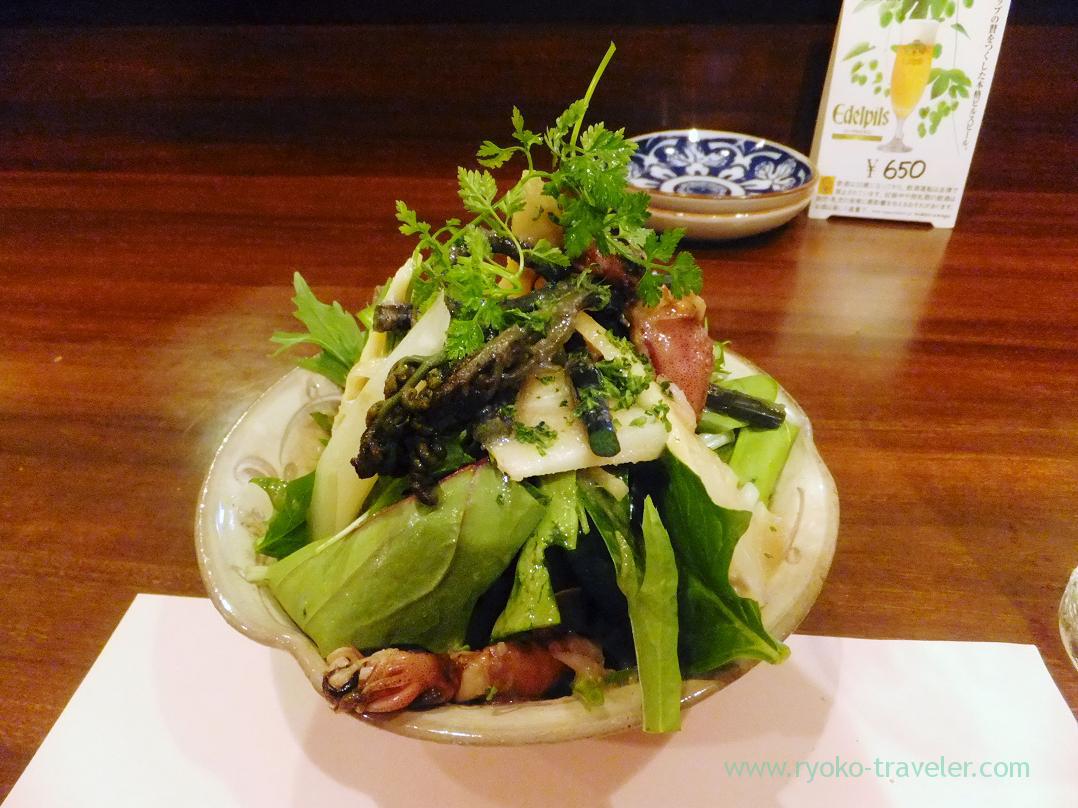 The name was “salad”, but too large and it had lots of ingredients like bamboo shoot from Wakayama, firefly squid, natural bracken from Uchiko-cho in Ehime and so on…
Those bamboo shoot and natural bracken was very fresh.
Also those organic vegetables were from Moriyama city in Shiga prefecture. Not only its taste, but they are also particular about the source of their ingredients.
The water cress was from Uchiko-cho and onion was from Moriyama city.
It was delicious, but so large !! I managed to eat it up, but it was very hard for me… 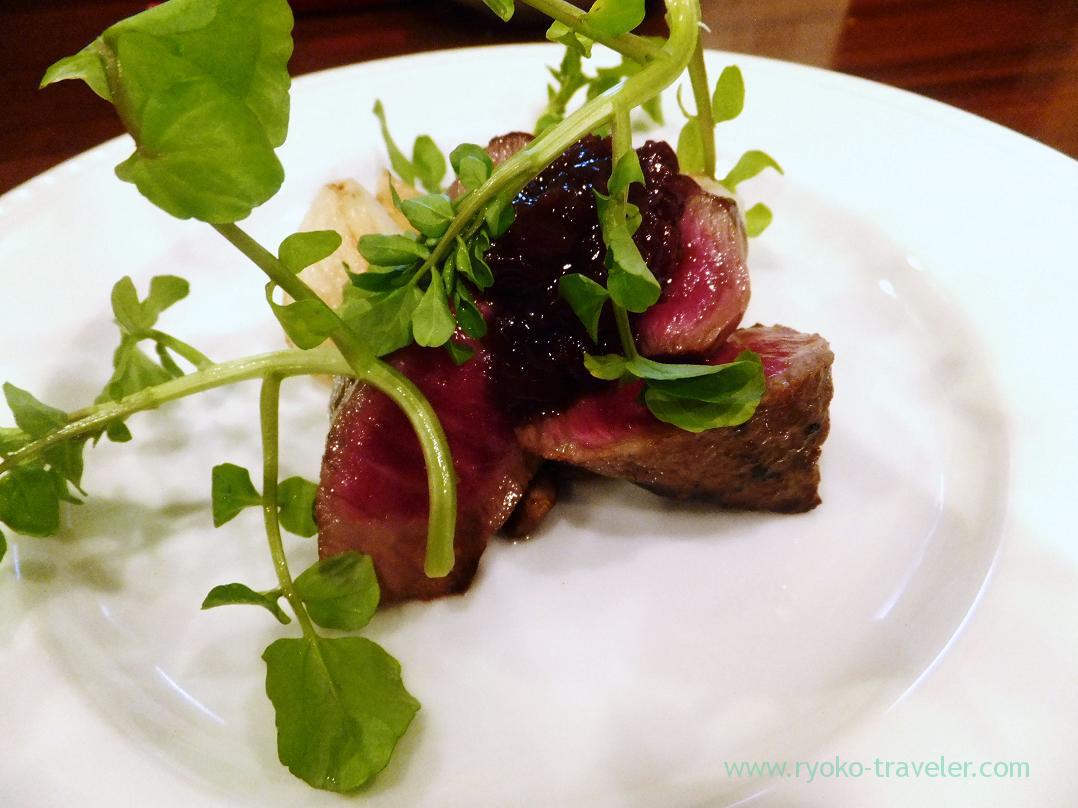 Last. I felt relieved that the steak was small.The degrees of burning was good for me 🙂 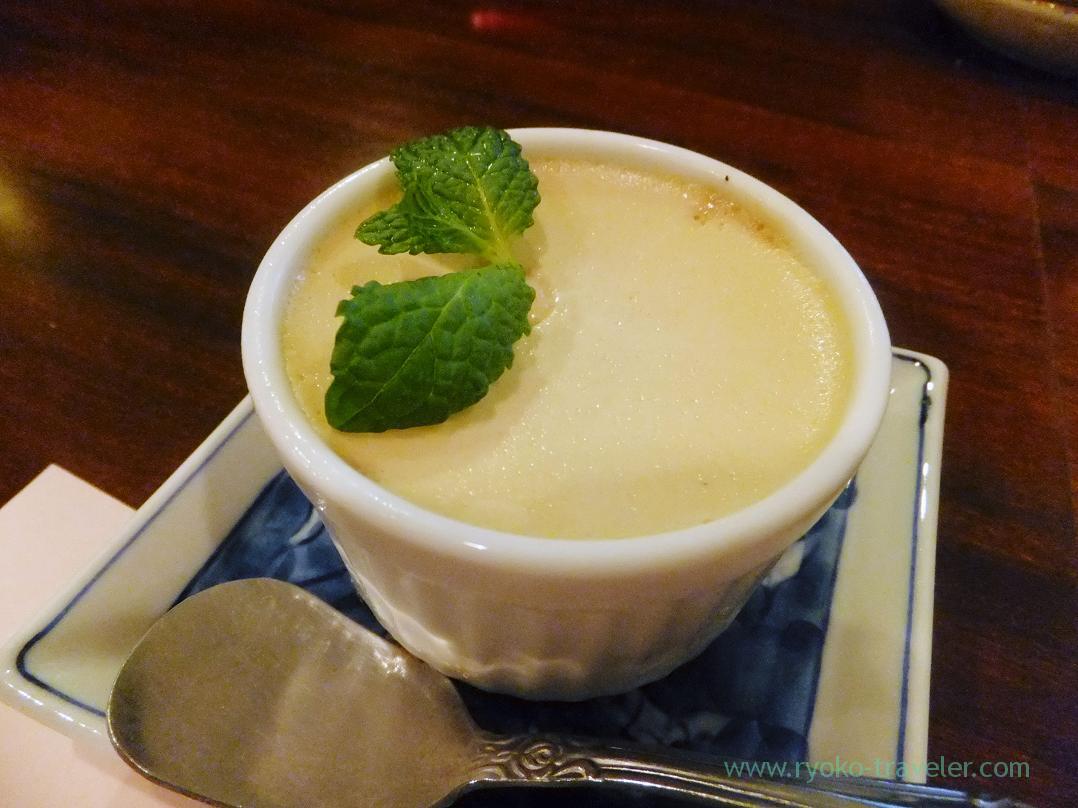 Also it had firstborn egg !!! Thank you !!!
Caramel sauce with raspberry vinegar from France was bottom of the pudding. It had sour taste a bit and tasty.
And the course had also one drink after the meal.

Our longing “Begin” was great as I had expected and we could spend wonderful time.
But… I couldn’t understand what is Naniwa-style 😛

We have to go there again soon …..

From Narita to Osaka and first meal at Osaka My article about trip to Italy has finished yesterday. And about Osaka eat...

A temple erected by Prince Shotoku After eating tonkatsu, we went to Shitenno-ji temple close to Tennoji station. ...

One of long-established takoyaki shop close to Abeno Harukasu After visiting the Shitenno-ji temple, we went to Takoyak...

Many "Jun-Kissa" still remains in Osaka. Today, I'll show you cafe and kissaten that we used during our trip to Osaka :...

I wanted to eat okonomiyaki having plenty of oysters in Osaka and I searched for it on the internet and I found an izak...
Tsukiji Market : Chef’s choice at Yonehana (米花)
Hokkyokusei Shinsaibashi honten (北極星 心斎橋本店) in Namba