I have just come back from trip to Fukushima 🙂
The onsen was very nice, and it was still cold. I’ll make the post about that later.

By the way, recently I heard a disappointment news for me.
That is,,, Jogame has quit their business in front of Morishita station.They served good curries on Sundays only and I liked their dishes.
I also heard that they will start their business again at Fukuoka. 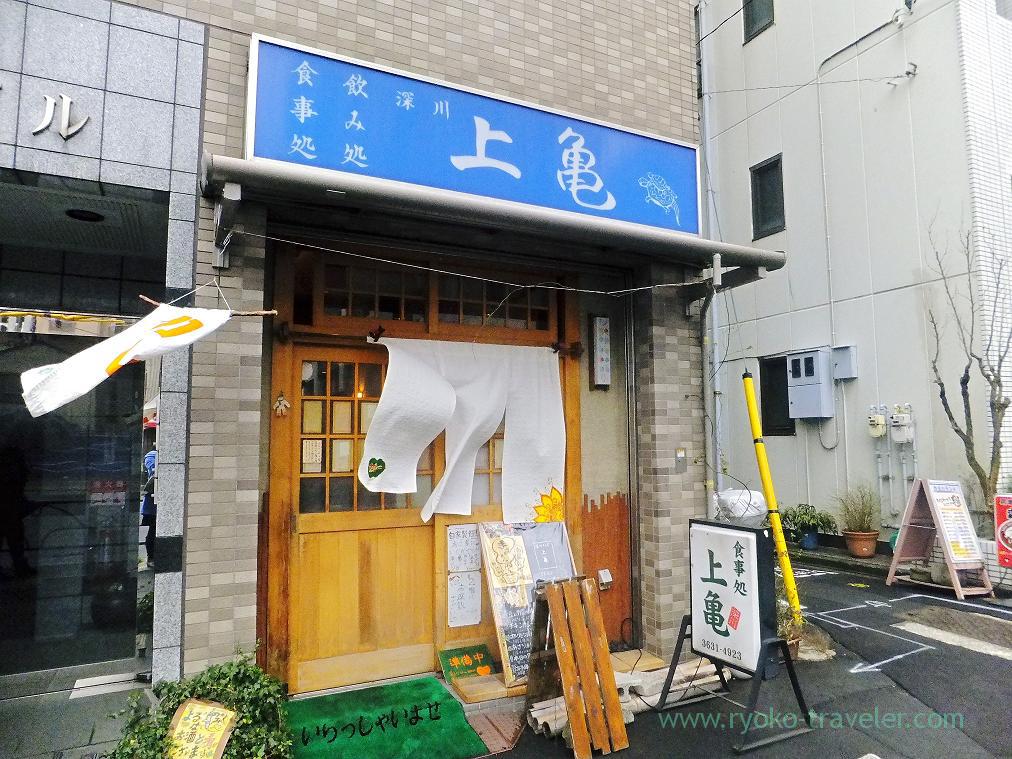 They will get out from main island !!!!

So, I went to eat their curries as last the other day. On windy day.
15 minutes before the opening time, there were already many people waiting in front of the shop. We were, too 😉 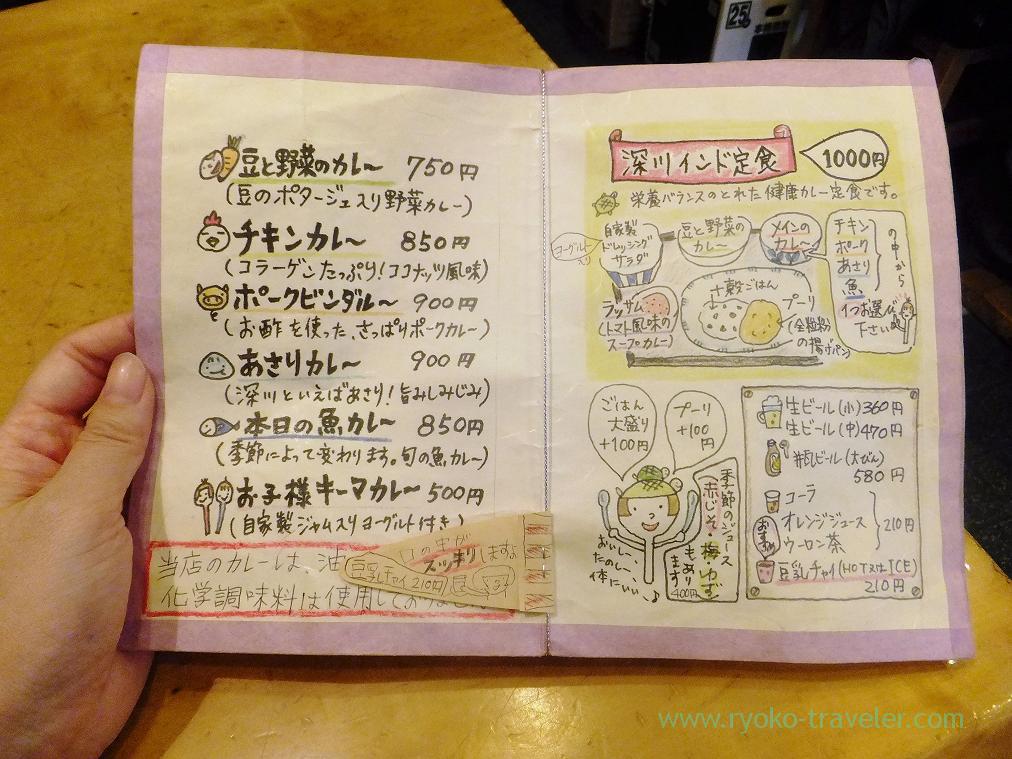 This was the last time to see such a cute, handwritten menus (T_T)

Jyogame had four types of curries. “Fukagawa Indian Lunch set (深川インド定食, 1000 yen)” could be choiced one curry from them.
But!! This was the last day for us to eat Jyogame’s curries, so we ordered all types of the curries. (+one curry was 400 yen) 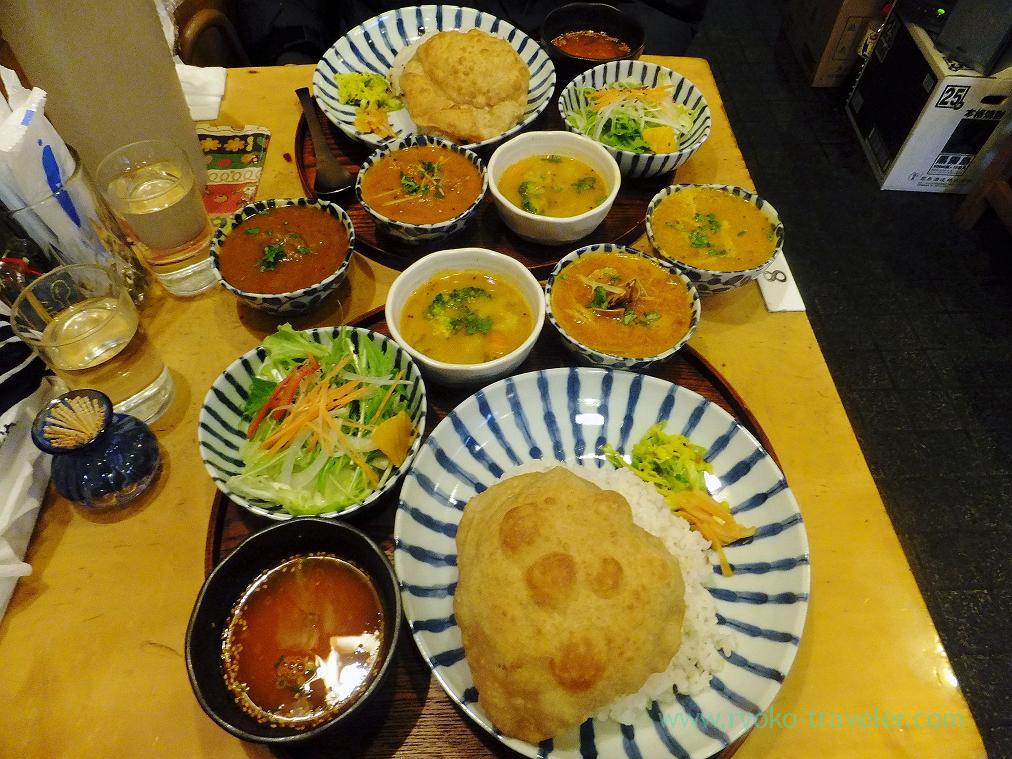 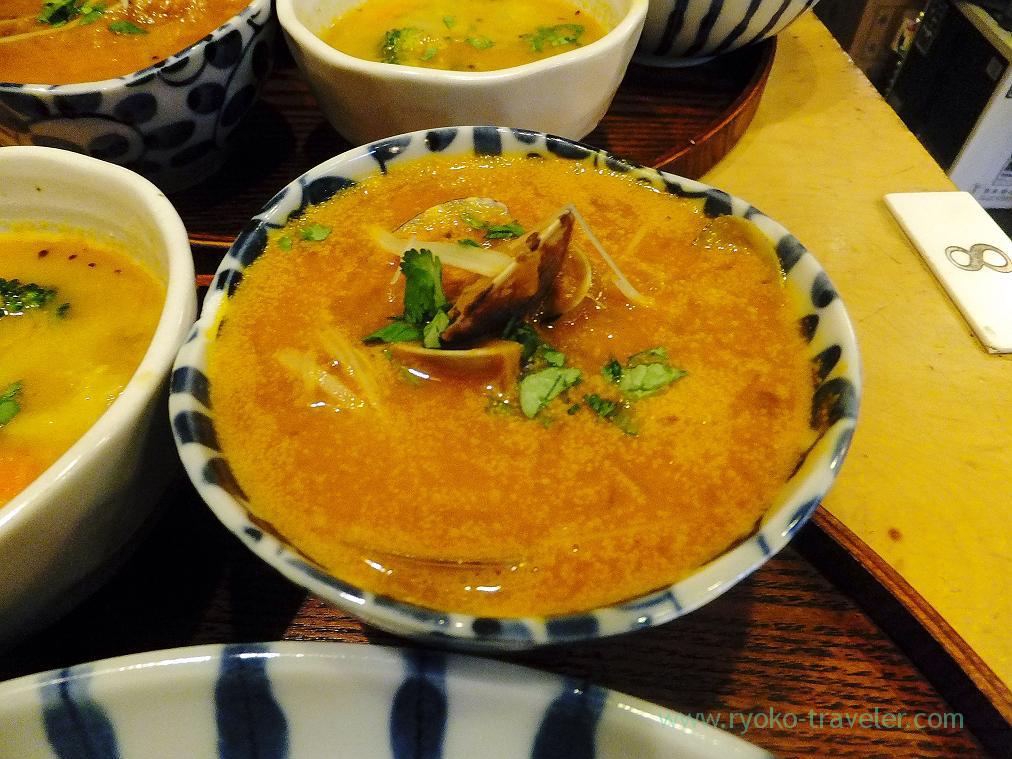 This had so much small asari clam in it, so I was tired of winkle shellfish out of its shell 😛
But I took and ate all shellfish…. 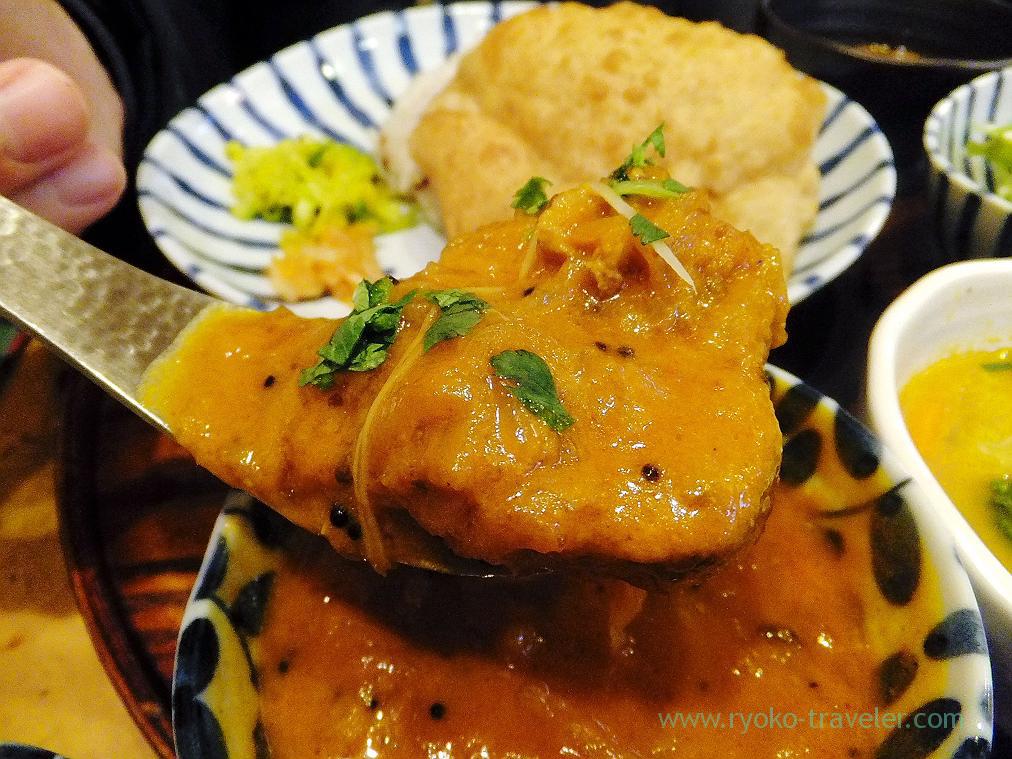 Larger pieces of chickens were in it 😀 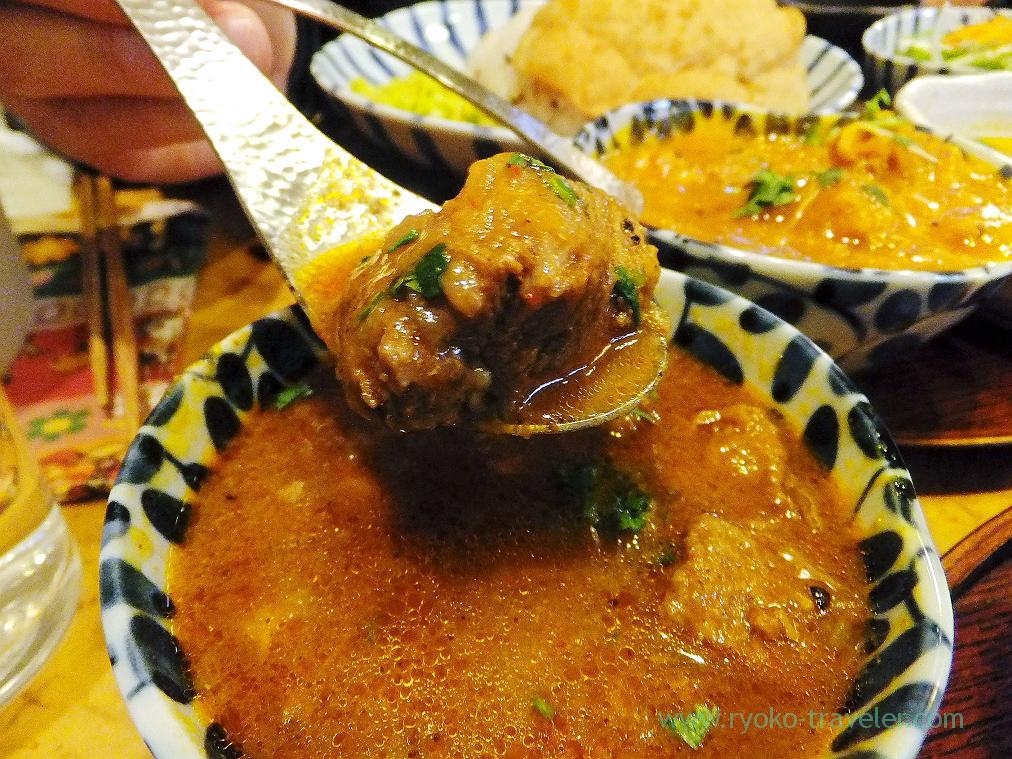 Most pork vindaloo make me feel bad because those are too much sweet for me. But this pork vindaloo was not too sweet and it was moderately sour and spicy. It was my delight taste ! 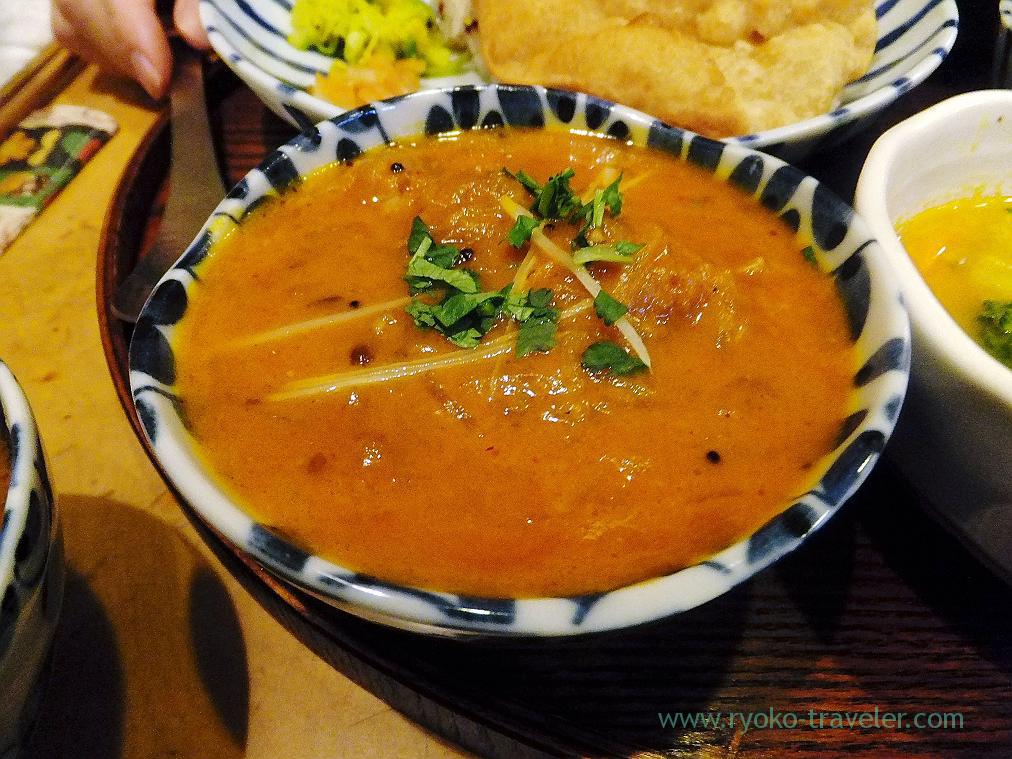 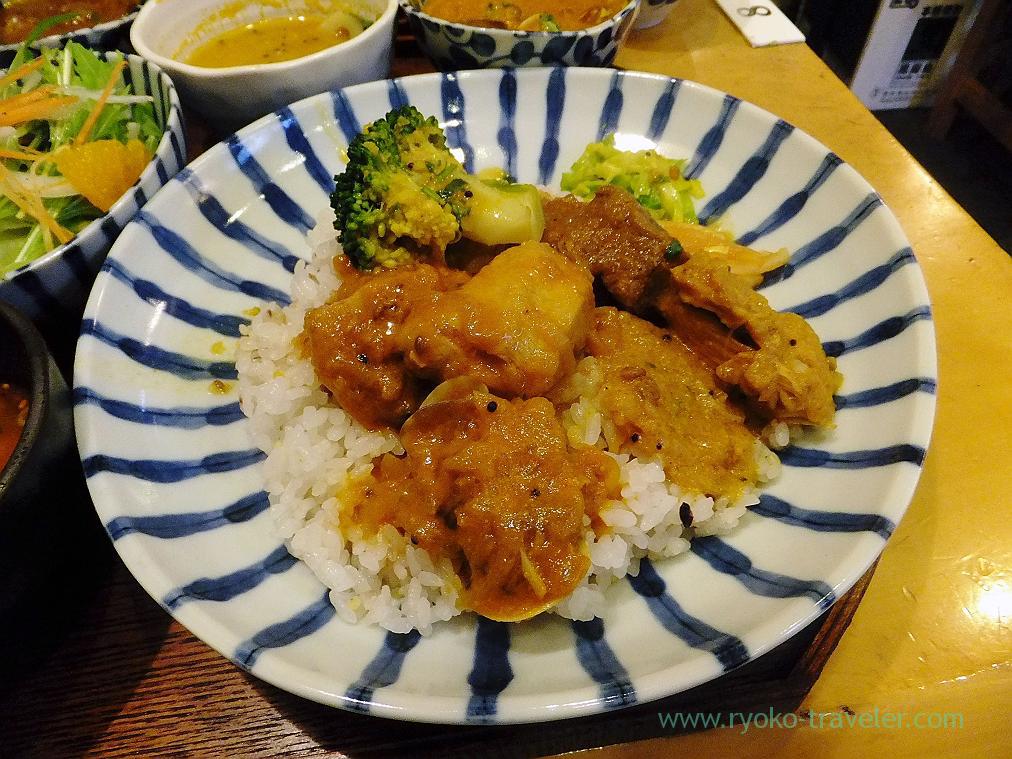 It was very good that day, too. But Fukuoka…. it is too far ….
http://www.ryoko-traveler.com/jogame1/

When I have lunch in Yotsuya-Sanchome area on weekdays (Mostly at Sushi Sho), I mostly go to Taiyaki Wakaba for dessert ...

Do you try to be sucked into Yonehana, too ? Though I planned to have breakfast at Yajima, but I found nakaochi (left o...

Unless crossing Kachidoki bridge, fresh tuna can be eaten. I tried to go to Tsukiji while my lunch break the other day,...