Too many young people think this word doesn’t matter for themselves. I thought, too.

Many of my father’s family died young, so I’m ready not to live so long. But I never want to die in the buff in the bathroom !

That is why, I regularly think some ways to avoid heat shock.

When I soak in a bath, I don’t worry about heat shock much.
But when I take a shower only in a bathroom, I’m so careful about that.
At first, I leave the hot water running before I enter in the bathroom in the altogether.
Truthfully speaking, I didn’t do before because wasting 😛
And, I keep the hot water running while I’m in the bathroom.
Well, I also don’t run extractor fan while taking a shower. (I’m worry mold may grow,  though…) Of course, I run extractor fan after I get out of the bathroom. By high-mode 🙂

When I soak in a bath, I never put my body into bathtub quickly.
Slowly, slowly, at first I soak my foot into bathtub and then I sit down fearfully.
And I take time to soak my shoulder in a bath.

Further, I bought a heater for dressing room the other day. 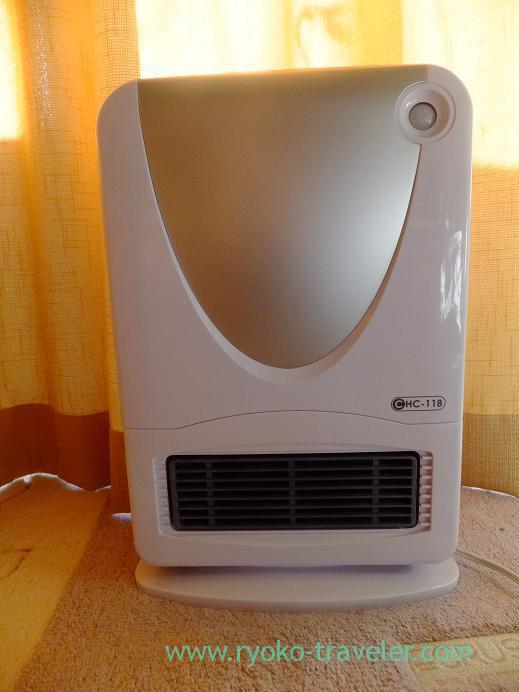 This heater has a sensor to detect people and it runs or stops automatically.

I wonder that there is anything else to avoid heat shock. Umm..

My way of spending day off

I used to eat rice at every meal time without fail and didn't like eating breads. But recently, I often eat breads as l...

This isn’t good looking, but tough

My coffee maker before was very cool looking, I loved it. But it was glassware and I broke it in half a year that I had...

Cherry blossom season this year is so short. I couldn't enjoy seeing cherry blossoms this year. It started to bloom fr...

The way of arrange Hair clips

I need your propose. Do you arrange such a clips in your room ? Now, I pinch basket with hair clips like it. It...
Trip to Nara 2012 Autumn, the 2nd night meal and the next morning’s breakfast.
Nara 2012 : Todaiji temple and Nara park (東大寺, 奈良公園)