There used to be a dark and gloomy alley in front of Funabashi Station. There also used to be a old izakaya along the alley, but the izakaya is nowhere and New Spanish bar has opened there without our knowledge. 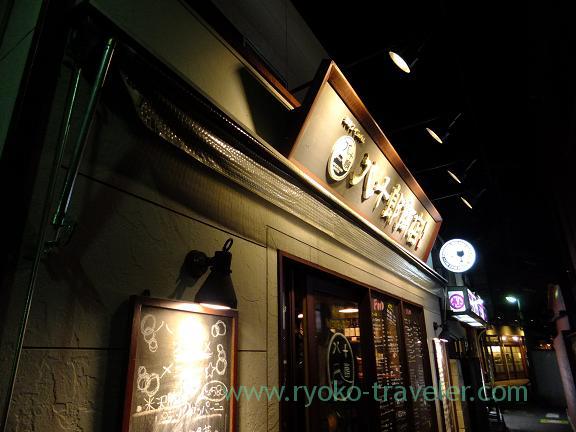 The atmosphere is better than before thanks to the bar 🙂
I had visited there without reservation before, but I couldn’t enter the bar because of full with reservation. So, this time, we reserved in advance and went to there 🙂 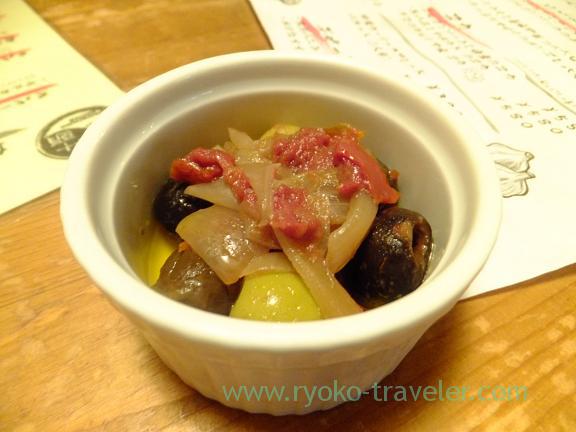 This was the first time, so we didn’t know those dishes’ volume.
We ordered assorted appetizers, uncured ham and ajillo for the time being. We heard those are standards of Spanish bar.

We ordered “three” appetizers, but as you see, four appetizers on the dish. Ah, the leaf hide one appetizer 😮 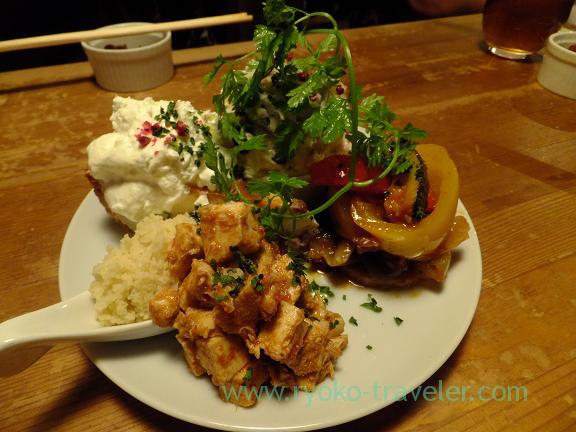 On this side, marinated breast meat of chicken with sambal, with couscous. Bubble texture of couscous was good. And the sambal sauce was spicy 😀
And right side, summer vegetables ratatouille. Big slices of paprika, zucchini was sweet and juicy. 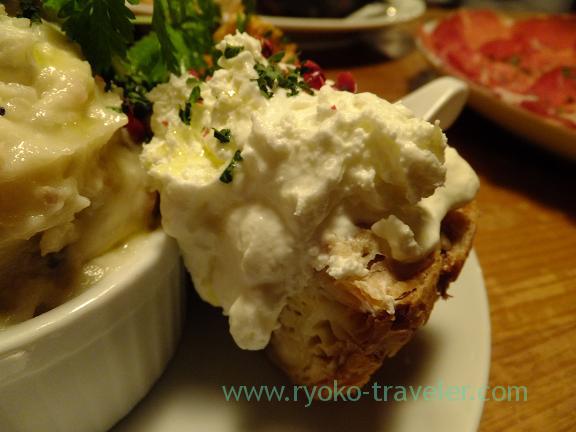 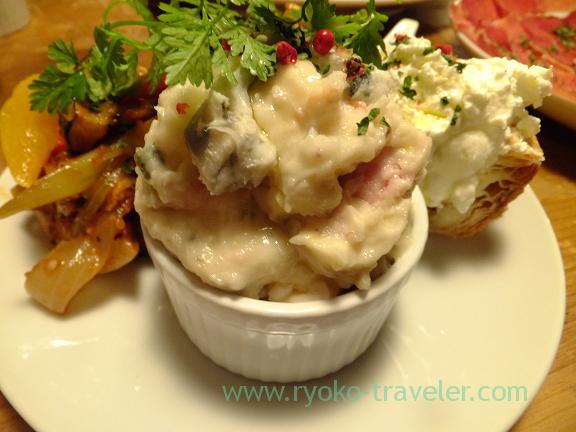 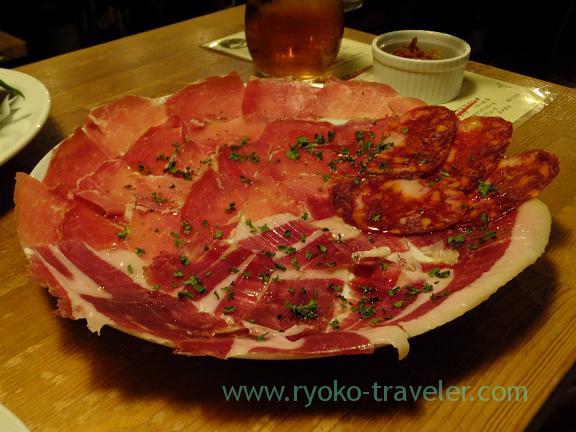 And Kujo negi (green onion from Kujo in Kyoto) and shrimp ajillo(海老と京都九条葱のアヒージョ) 580yen
The flavor of garlic was very good.  Also the flavor of Kujo negi, too. I wanted to monopolize it 😛 I love ajillo to drink up the leftover oil !
So, I soaked the bread in the oil to the maximum and ate 😛 Ah, slices of bread is extra charge, 280 yen. 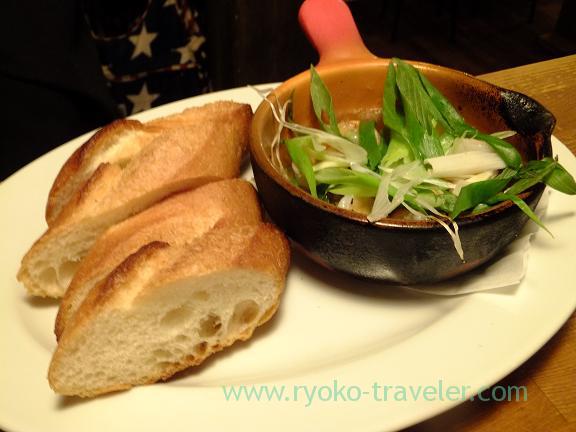 After I drunk up my champagne, I orderd a white wine. Though I don’t like wine, this wine was tasty because it was mild and no harshness. 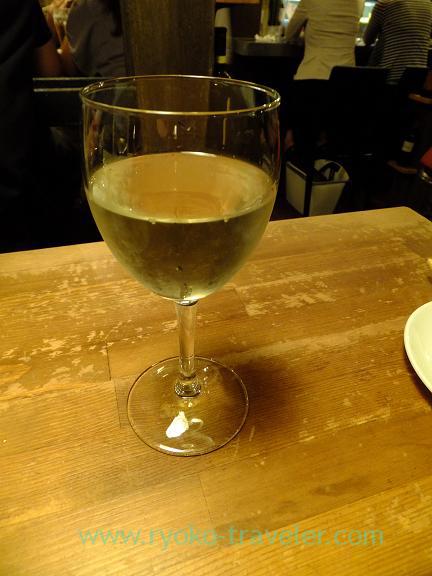 While eating, we already decided next dish by the black board:)  Huge sausage ! 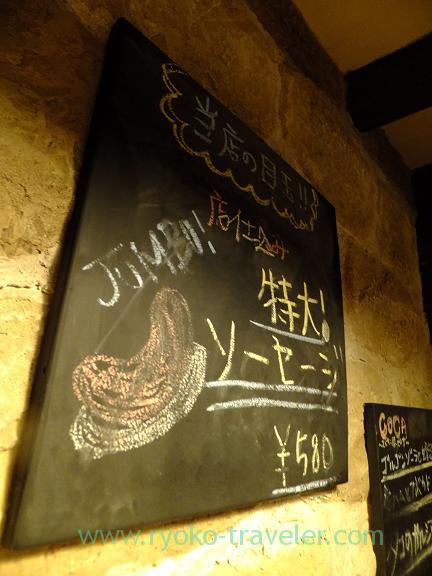 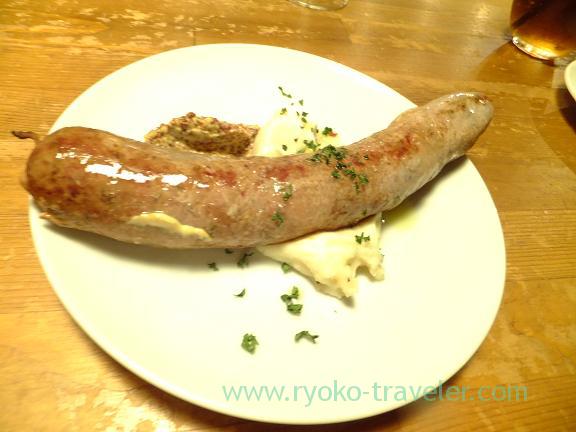 It was sooooo juicy, Cutting into it with knife, lots of meat juice flew ! 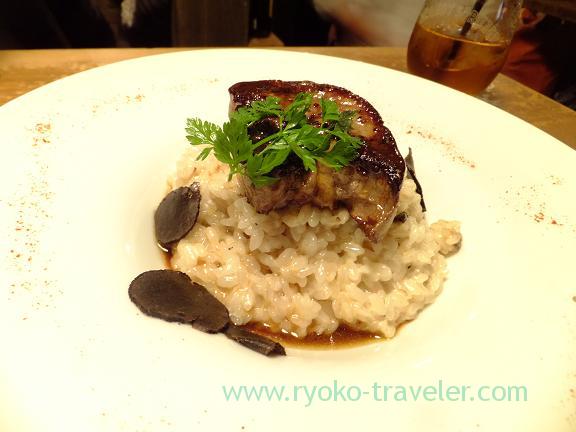 Soooo good flavor and rich taste !!!!
The foire gras was soft and tasty !

The dish were to be last dish for us that day,,, but !

We found a brilliant dish that was served our neighborhood. We was facinated to the dish, and we decided to eat that.

This is the dish.
Today’s fresh fish carpaccio (本日鮮魚のカルパッチョ) 880yen. 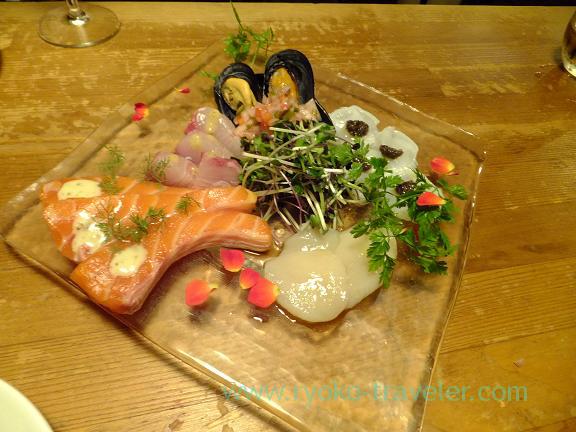 From salmon at in a clockwise direction, greater amberjack, mussels, octopus and scallop.
The salmon was great. And also the octopus was ! Those fishes were directly from Tsukiji Market  !

Every dishes were tasty. I can understand why the bar is always full with reservation 😀  I wanna go there again.
I must order the ajillo, uncured ham and risotto without fail.

I went to grilled meat restaurant for the first time in a while. With my mother. Although I say, the restaurant is clos...

Popular bakery and cafe in Tsudanuma It was very sunny yesterday, so I went for a walk around Tsudanuma station. I...

There's some eateries that I hadn't visited. One of the eatery was ... Yajima It is Chinese foods eatery like noodl...

I wonder if for years past since I ate at. Not such a long absence, may be It is 1 years since. I had a lunch at Gusto...
Tsukiji Market : Saury !
Katsutadai : Special lunch meas at Hana (葉菜)