I had wanted to go popular bistro as tasty and large meat at lunch time close to Hongo Sanchome metro station.
But lunch menu is week days only. So it is hard for me to go there.

But finally, I could be there ! 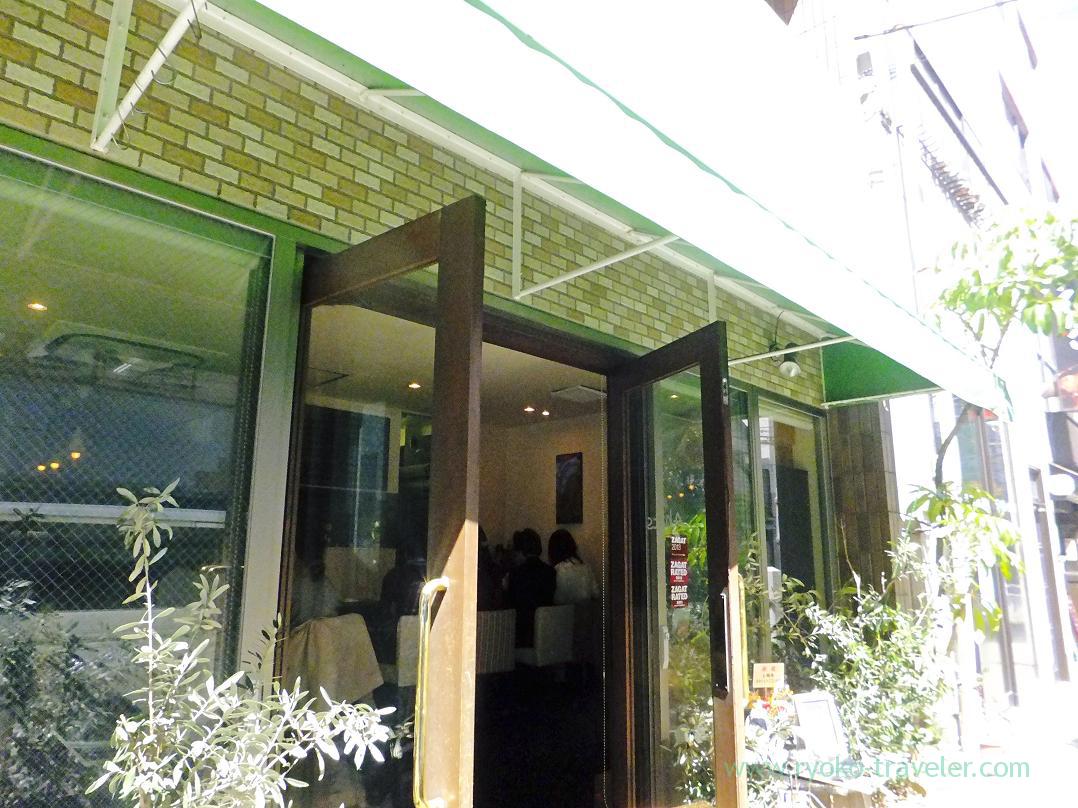 When we got to the restaurant, there was little vacant seats.
And lamb and duck meat that was our target was already sold out ! 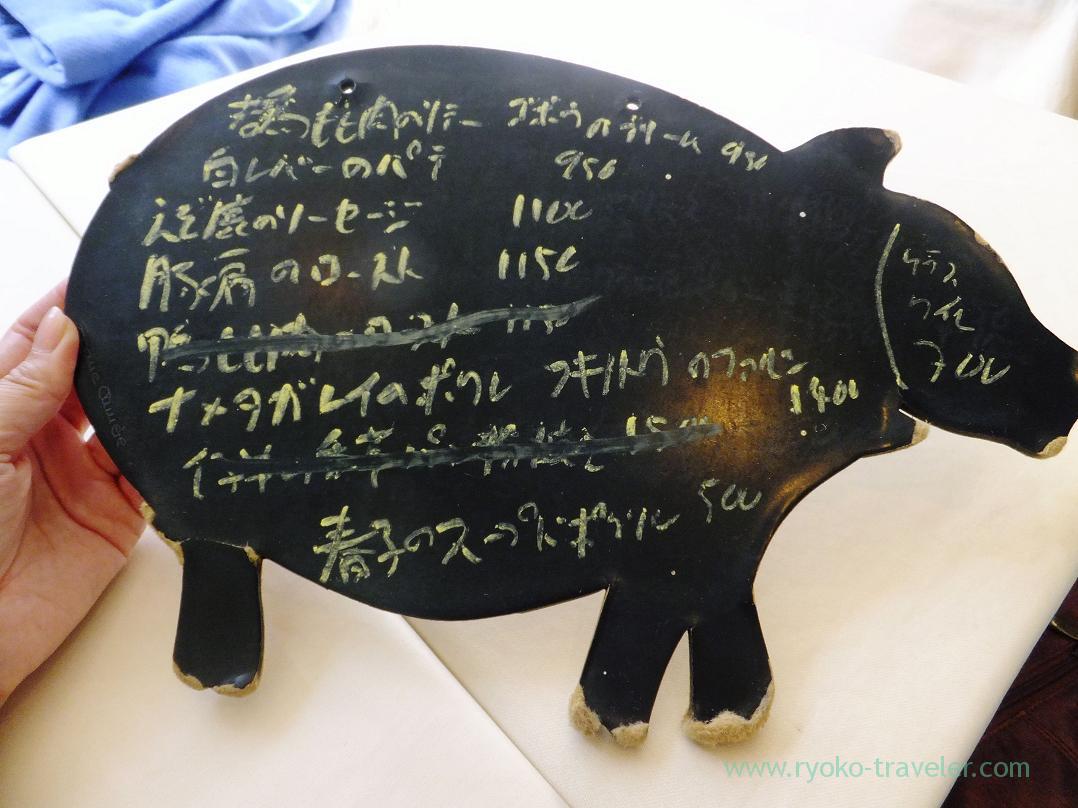 One staff led guest to seats, serve water, cook, check and setting table again. He seemed too busy. We were seated and waited patiently until he took our order 🙂 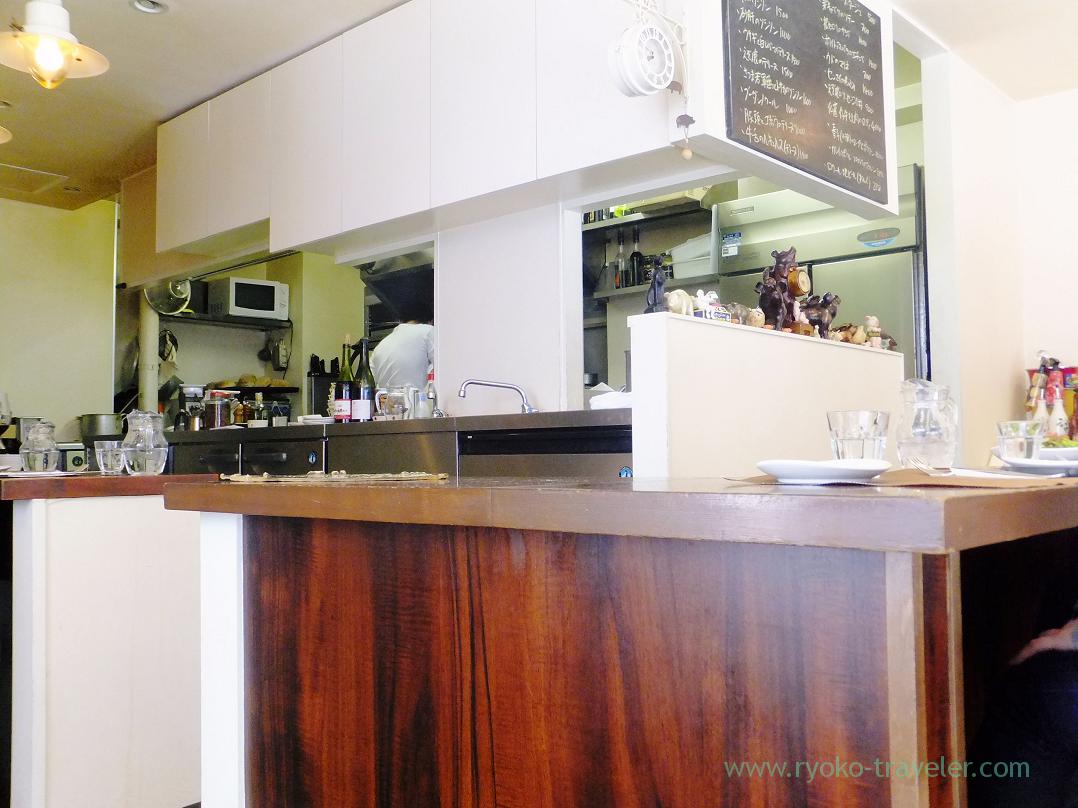 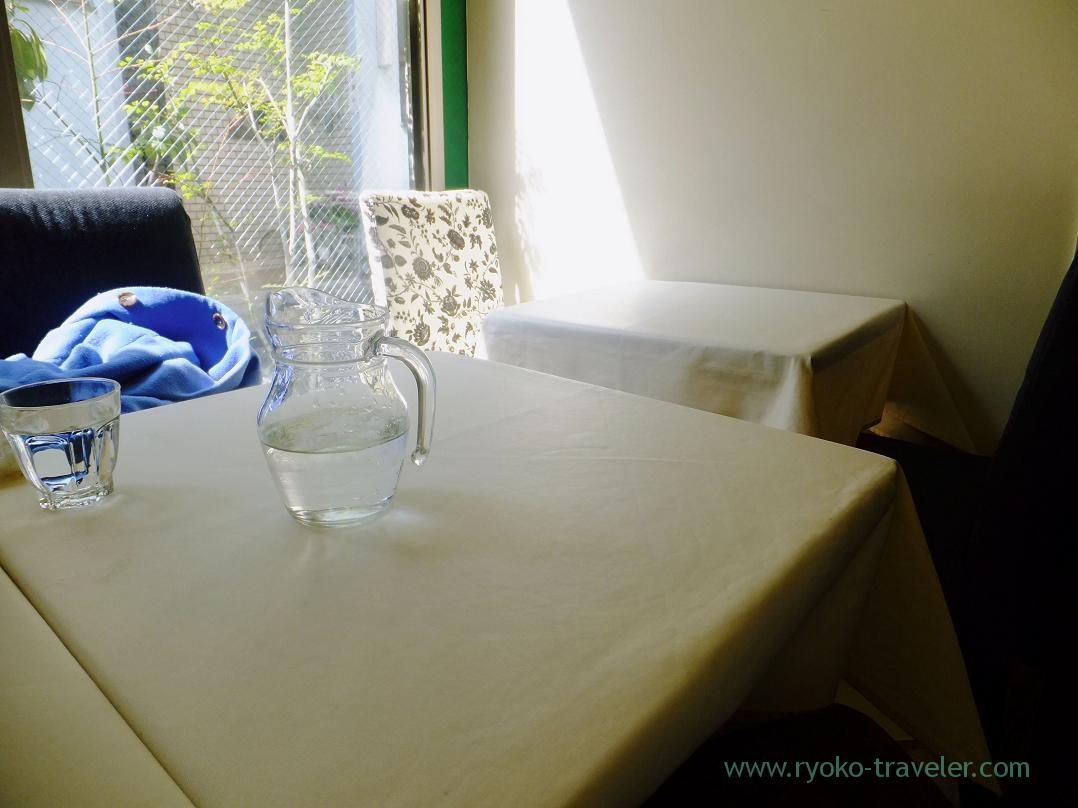 I pulled myself and ordered roasted pig’s shoulder (豚肩のロースト,1150 yen) that is ordered by my acquaintance before.
But I was disappointed while waiting ….

Anyway, our breads were served. 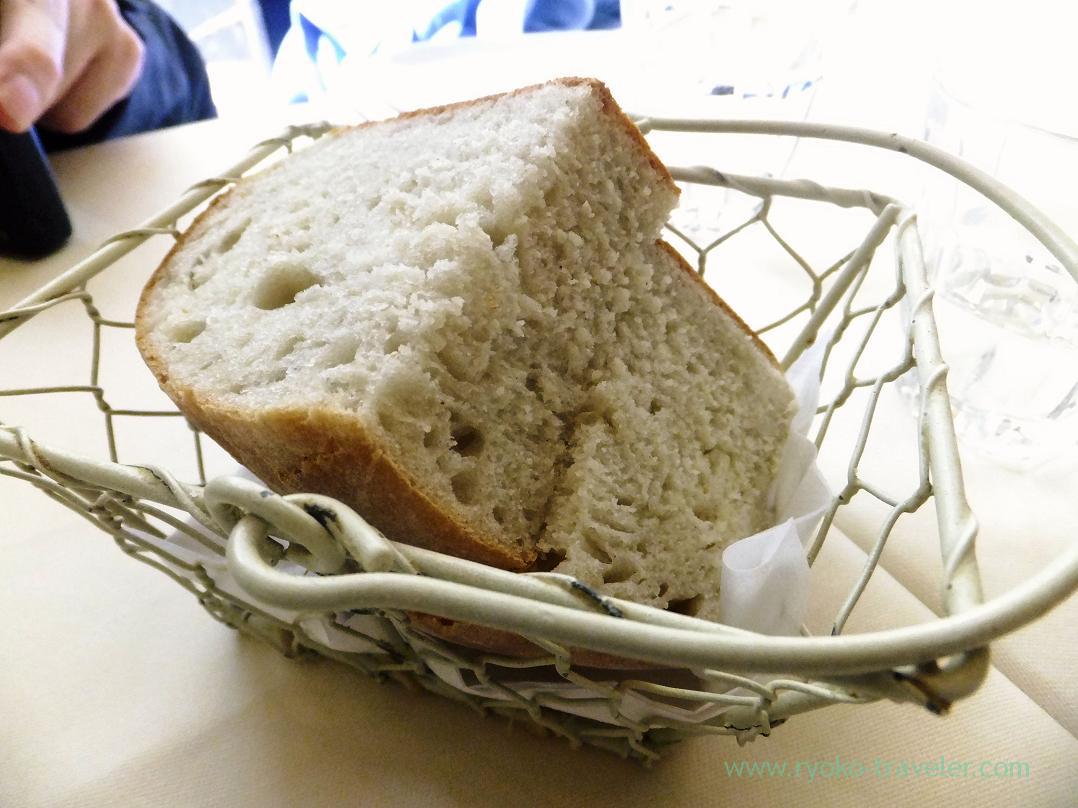 After ten minutes or so, our dishes were served. 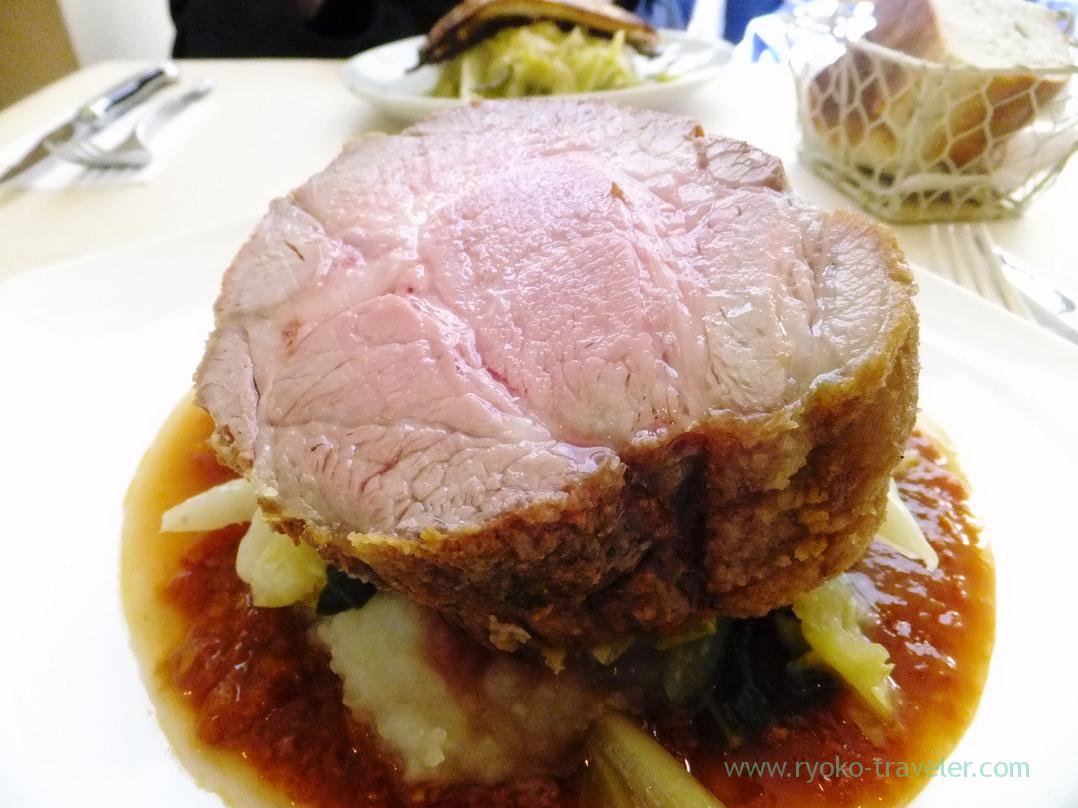 Unbelievable juicy pork ! Though it was thick, I could easily cut with my knife !
Mushed potato and steamed cabbage under the meat. Those were good too. It went with tomato-based sauce very well. 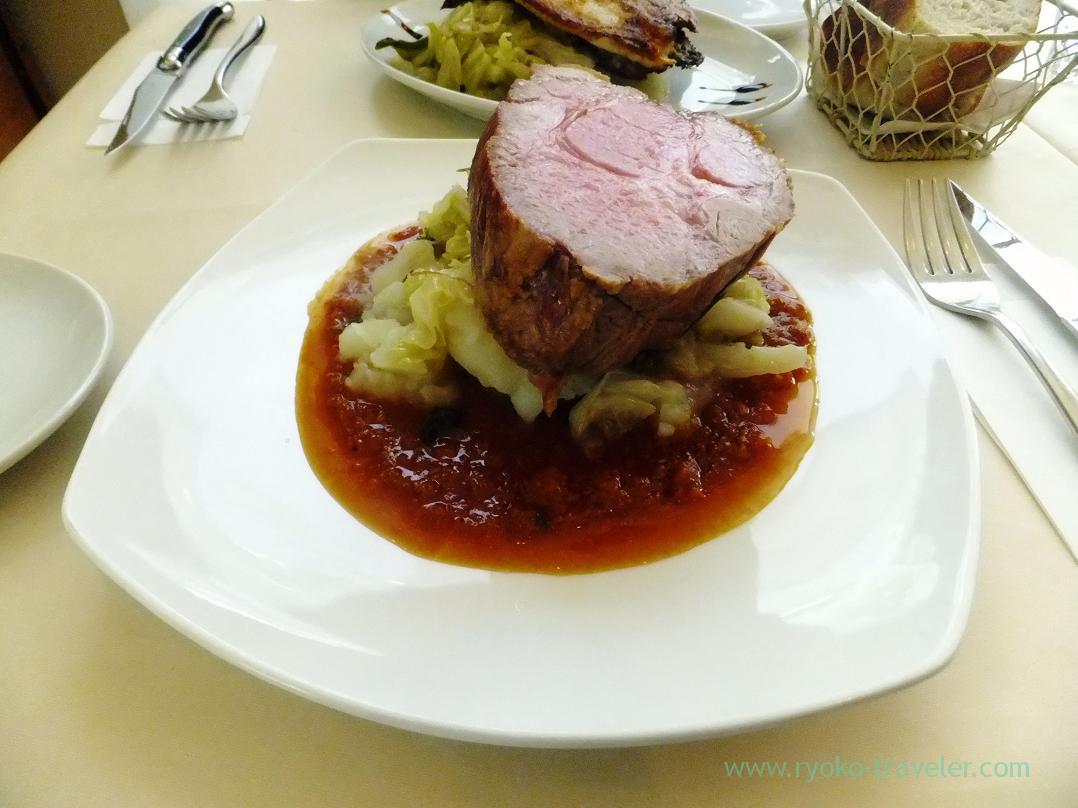 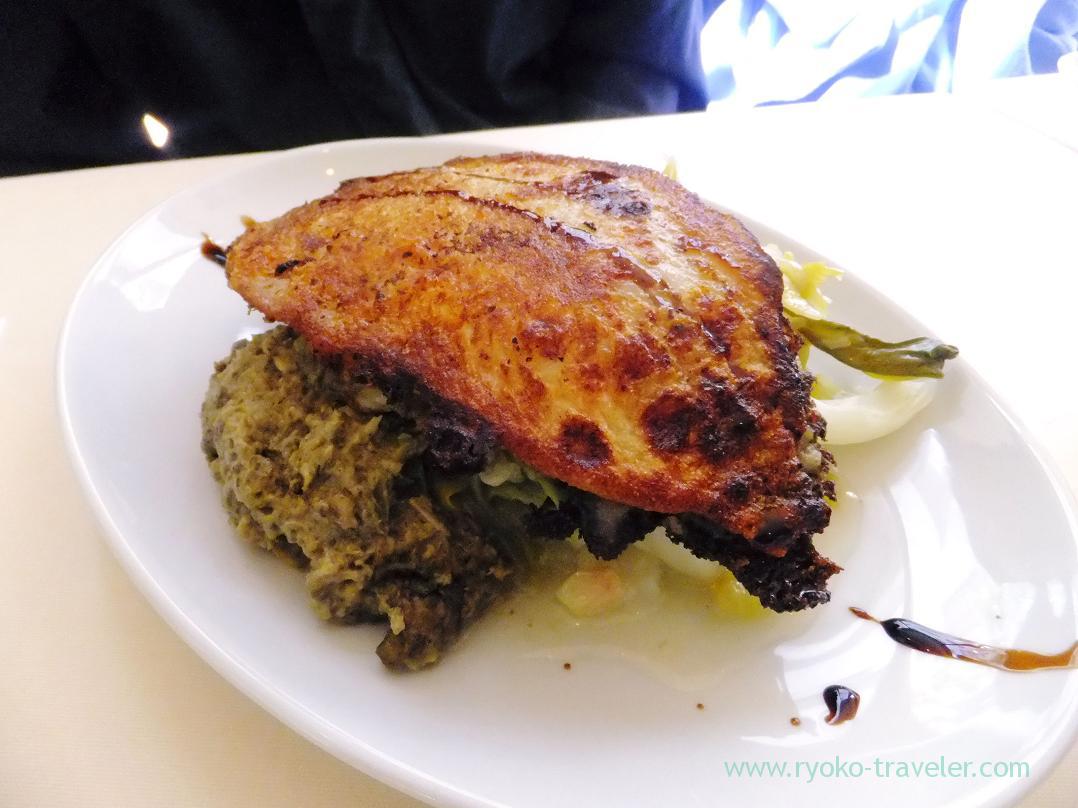 Its name contained “farce” in Japanese words, so I use the word “stuffing”. But actually it wasn’t stuffed and the petasites  japonicus  (called “fuki-no-tou” in Japanese)  was under the fish. Maybe he couldn’t stuff it into sliced fish 😛
The petasites japonicus was bitter and I didn’t like it. But the fish was good. Its outside was crisp but inside was soft and juicy.
Indeed it was good, but he should have ordered meats there all the same 😛

Manso's pancake come to life again at Kamata One of my great regret is that I couldn't visit Manso serving great pancak...

Kansai-style eel box at the center of Ginza I want to eat much eels this year :) So, I need to find eels restaurants t...

Rupurin located in Ginza is a bar that serves tasty dishes, local beer and natural ice kakigori in nighttime. And duri...

I felt like having beer at early evening on weekday around Ginza area and visited Pilsen Alley that is stand-up-drinking...

Yukhoejang in my memories I went to Nihonbashi after a long time, so I went to eat Yukhoejang (ユッケジャン, 950 yen) at Mud...
[Osaka] Ibuki Coffee (伊吹珈琲店) in Kuromon Market
[Yao of Osaka] Tonkatsu Manje (とんかつマンジェ)